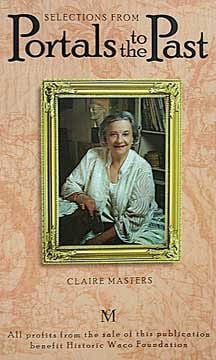 Claire Masters has collected stories from historic Waco homes and compiled them in a book for Historic Waco Foundation. 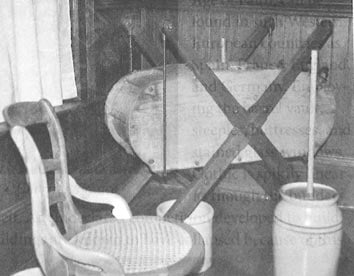 In the kitchen of the Fort House, visitors can see the Davis Swing Churn, patented by Vermont Farm Machine Co. of Bellows Falls in 1877. It was built without interior paddles. As the box rocked on the cradle of the $8 mechanism, cream rolled over on itself to make butter.

For an additional $16, the manufacturer provided a treadmill attachment that allowed a dog, goat or even sheep to supply the power to swing the churn — as this catalogue illustration promised.

Claire Masters has collected stories from historic Waco homes and compiled them in a book for Historic Waco Foundation.

In the kitchen of the Fort House, visitors can see the Davis Swing Churn, patented by Vermont Farm Machine Co. of Bellows Falls in 1877. It was built without interior paddles. As the box rocked on the cradle of the $8 mechanism, cream rolled over on itself to make butter.

For an additional $16, the manufacturer provided a treadmill attachment that allowed a dog, goat or even sheep to supply the power to swing the churn — as this catalogue illustration promised.

For Claire Masters, not only do the walls of Waco’s historic homes “speak” to her, but just about all the objects around McCullough House, Fort House, East Terrace or Earle- Napier-Kinnard House have tales to tell as well. Masters has shared for more than a decade the stories of the salt cellars and kitchen aprons, the flapper bathing suits and butter churns, the spode dinnerware and hook rugs of the city’s founding families whose dwellings survived the wrecking ball of “progress.”

She now has collected many of those stories of vintage valuables in book form as a fundraiser for Historic Waco Foundation. The book is “Selections from Portals to the Past.”

She recalls it was the year 2000 and she was hanging out at the foundation offices when word came that the Tribune-Herald was starting a monthly magazine called Waco Today and that editor Bruce Kabat was seeking someone to write a column.

Masters already had written more than 500 articles as a freelancer when she lived in the San Francisco area.

“I had a monthly shopper column that was gobs of fun to do,” said Masters, who developed confidence as she gained experience.

“No one seemed to want to give me much direction, so I did my own thing,” she said.

But Kabat said he wanted the Waco Today column to be tied to the foundation’s holdings and activities. He wondered if such a focus “had legs.”

“He said, ‘You only have four houses to work with. Do you think you’d have enough material?’ ” Masters said.

She had been cataloguing the the property for 10 years (a task she would still be at 11 years later), and had dozens of ideas just to start.

Masters’ book, then, is a collection of 60 of the 125 art columns she has penned for Waco Today in the past decade. Her topics range from fashion history and textiles (her personal passions for more than 40 years) to architecture, decorative arts and personalities.

“It’s been a glorious time,” Masters said. “I’ve interviewed lots of wonderful people, experts in all kinds of areas of interest.”

She also has been able to work in some of the information she has gleaned from her travels abroad, especially her appreciation of the architecture of European cities and how it has been emulated by admirers here.

Waco is “a backwater,” Masters said.

“But I mean that in the positive sense, good sense,” she added. “We haven’t gotten around to tearing down all the grand old structures around here. We’ve saved many of them.”

Masters was a protégé of the late Lavonia Jenkins  “Bobbie” Barnes, the devoted preservationist of Waco’s history who championed its founders’ homes. She was tapped by Barnes to help care for and catalogue the massive collection of Victorian and early 20th-century textiles and garments that Barnes amassed for use in the house museums.

Masters and her husband, Peter, retired to Waco almost 30 years ago after residing for several decades in California. They had wed in San Francisco in 1963.

It was a homecoming for her. Though born in Dallas, Masters spent much of her childhood in Waco in the home of an aunt. She attended Sanger Avenue Elementary, West Junior High and Waco High schools.

The Tribune-Herald  gave Masters permission to re-publish some of her work for the monthly city magazine because she pledged that all proceeds from “Selections from Portals to the Past” would go to support the Historic Waco Foundation’s mission.

The paperback, from Davis Brothers Publishing, retails for $25, including tax. It is available at the Historic Waco Foundation office, 810 S. Fourth St., or by calling 753-5166 for more details.

Masters said she hopes to sell out the first run of 500 copies by Christmas.