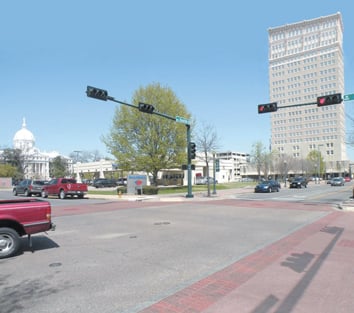 BEFORE: Downtown Waco at Sixth Street and Austin Avenue has plenty of open space, and Fregonese Associates has drafted plans to maximize its potential.

AFTER: This rendering shows what the same intersection would look like with mixed-use development that provides retail space and is friendlier to pedestrians and cyclists.

BEFORE: Downtown Waco at Sixth Street and Austin Avenue has plenty of open space, and Fregonese Associates has drafted plans to maximize its potential.

AFTER: This rendering shows what the same intersection would look like with mixed-use development that provides retail space and is friendlier to pedestrians and cyclists.

An ambitious 40-year master plan to reclaim Greater Downtown Waco follows the strategy of a man eating an elephant: one bite at a time.

•  Transit circulators, such as shuttles, reduce need for driving.

•  Neighborhoods around downtown begin to fill with small-lot houses and townhomes.

•  Possible hotel and other riverfront development near Franklin Avenue.

•  Streetcar system is completed from Baylor to Cameron Park Zoo, and from Central Library to Quinn Campus.

The city-commissioned Imagine Waco Plan envisions 60,000 additional people living in the 7.5-square-mile area around downtown by 2050.

Office towers, upscale condos and hotels would flourish along both sides of a scenic riverfront. Streetcars would tie downtown to a redeveloped Elm Avenue, in the heart of a prosperous East Waco, and water taxis would ply the Brazos.

But in the short term, the city should focus on a handful of “catalyst projects,” according to the plan by Fregonese Associates of Portland, Ore.

“I think it’s all practical,” head of the firm John Fregonese said. “But it’s important to take those first few steps to build the foundation for the overall vision. . . . It has to be small enough to get done in the short term but big enough to make a difference.”

Fregonese Associates has worked with a large local steering committee for the past year and has held interactive public workshops that drew 350 people. The public will be invited to discuss the plan in August, and the Waco City Council could approve it by early fall.

The $300,000 plan recommends land use and transportation infrastructure throughout the greater downtown area, which stretches from Quinn Campus to 18th Street and from Cameron Park to Baylor University.

As early as next year, the consultant said, the city should create a downtown development corporation and start working on two or three catalyst projects that would demonstrate to the public and developers that the transformation has begun.

“It’s real difficult to go recruit investors if they can’t see some blueprint for what we want to happen,” City Manager Larry Groth said. “When they see the city is committed to supporting those activities, it makes it easier for them to want to invest.”

In the short term, the city could invest in projects such as:

*  A fountain plaza at Elm Avenue and Martin Luther King Jr. Boulevard. At the same time, the city or its development corporation should work with property owners and developers to create retail attractions and 50 units of housing around the plaza.

*  A major riverfront development between Franklin Avenue and Interstate 35 that would include public river access, retail, restaurants, housing and a possible eight-story hotel. The city could offer land and structured parking improvements.

*  Alternatives to driving, including walkways, bike lanes and short-distance public transit. The study urges a downtown circulator — perhaps a fixed-rail streetcar or a specialized bus — that would reach to Baylor and ultimately to East Waco and Cameron Park.

The Fregonese plan urges the city to commission a feasibility study for streetcars or other circulators. Better transit connections should also be made to Texas State Technical College, McLennan Community College and Baylor’s new research park.

Meanwhile, the city could add bike lanes and walkways along Fourth and Fifth streets to improve the connection between downtown and Baylor. Other bicycle routes could be created along 15th Street and Franklin and Washington avenues.

Groth said it’s premature to talk about which catalyst projects the city might start with or how much they might cost.

He said the Tax Increment Finance Zone is one source of revenue to jump-start projects, and he would expect private investment to be part of any major redevelopment.

Fregonese agreed public and private investment need to be simultaneous.

“You don’t want to put in a plaza and have it empty,” he said.

Rick Sheldon, a commercial developer who owns riverfront land south of Franklin Avenue, said the proposed master plan fits with his own vision, which includes streetcars, hotels and an arts attraction. He said it should be useful in recruiting outside investors to downtown Waco.

“This validates what we’ve been trying to do,” he said. “We’ve got $6 million invested in this property, and we feel confident this plan will happen.”

Sheldon said a streetcar system would be the biggest catalyst for development, and he thinks a combination of private, city and federal money could cover the estimated $25 million cost.

Sheldon wants a major upscale hotel at the corner of University Parks and Franklin, but because of the nationwide downturn, he estimates that’s two or three years away. But he said downtown Waco is becoming more attractive to investors for projects such as hotels, movie theaters and supermarkets.

“Two or three years ago, hoteliers thought I was nuts,” he said. “Now they’re starting to say the idea has merit.”

He said the community is also beginning to think more ambitiously about the future of downtown.

“This is a conservative community, but we can’t get what we want without spending some money,” he said. “The city has to understand this is an investment. We have to take a leap of faith.”

The plan is broken into three phases based on future population growth. Some types of development, such as high-rise office towers, will likely be two or three decades away, according to the plan.

Those involved in the study acknowlege the growth goals for all three phases are optimistic. In fact, they conflict with the market study that’s included with the plan.

By 2015, the plan envisions 10,000 new residents in greater downtown. Assuming 1.8 residents per unit, Greater Downtown would have to have 1,111 new housing units a year for the next five years.

The plan’s market study shows 70 to 100 new rental units a year for the next decade, plus 35 to 50 owner-occupied units.

Fregonese said Greater Downtown may not reach the 10,000 threshold until 2015 or 2020, but the important thing is to plan for growth, whenever it happens.

He said the initial market for downtown living will be empty-nesters and retirees looking for a hassle-free urban lifestyle, as well as young singles and couples.

“It’s not just hipsters,” he said. “It’s older people as well, people tied to Baylor or other things in the city that they want to be near. We’re looking for a broad-scale demographic.”

Fregonese said that a newly vibrant downtown should attract more young professionals to Waco, citing examples such as Austin and Athens, Ga., home of the University of Georgia.

‘A lot of assets’

“You have a lot of assets that Athens doesn’t have,” he said. “The Brazos is a beautiful asset. You’ve got the bridges, and Elm Street is going to be a tremendous resource.”

Chris McGowan, urban development director for the Greater Waco Chamber of Commerce, said as the plan is implemented, residents and outsiders alike will begin to think about the city differently.

“We have seen the community’s internal perceptions begin to change,” he said. “Downtown is a source of pride for a lot of the community.”

For more information and short videos showing the vision of the future downtown area, visit www.imaginewaco.org.

Franklin Avenue would include hotels, restaurants and cultural attractions.

Mary Avenue, seen looking east toward the Brazos River, would be redeveloped as a festival street.