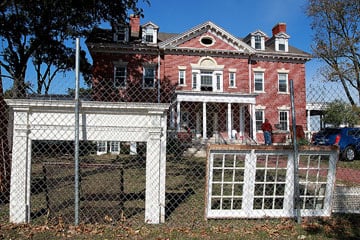 Owner Robert Tunmire plans to remove the 13,000-square-foot brick Shear-Callan mansion and replace it with a garden and pavilion. 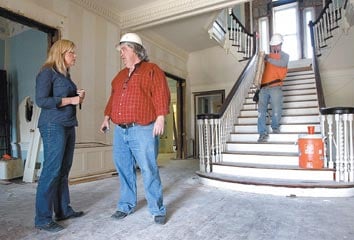 Owner Robert Tunmire plans to remove the 13,000-square-foot brick Shear-Callan mansion and replace it with a garden and pavilion.

Everything in the once-grand Shear-Callan mansion is being pried apart this week and put up for sale on the front lawn. And so far, the salvaged architectural treasures are hot commodities.

The “deconstruction” of the mansion at 1401 Columbus Ave. began Monday after the expiration of a 60-day demolition moratorium the city of Waco imposed in hopes that someone would rescue the historic home.

No serious buyers came forward, and owner Robert Tunmire wasted no time this week in getting started.

His plan is to remove the 13,000-square-foot brick structure and replace it with a garden and pavilion to serve the event center he is creating next door at the historic Migel house.

Tunmire hired Orr-Reed Wrecking Co. of Dallas to strip the century-old house of its fine finishings, then disassemble it top to bottom, stick by stick, brick by brick.

“Isn’t it cool that this stuff isn’t being thrown away?” said the firm’s owner, John Hargrove, as men chiseled up marble tiles from the porch Thursday. “I’m very proud of that.”

Inside, other workers were disassembling the mahogany panels that a Waco attorney bought for his home for about $5,000. Bargain hunters swarmed the house and lawn and haggled with Hargrove, who said he has heard a mixture of grief and excitement about the deconstruction.

“Some people are almost mad at first, asking why we’re doing this,” Hargrove said. “I say, ‘Yeah, I get it, but at least it’s not going to the dump. At least in 100 years, this will be sold out of another house.’ ”

Both the Callan and Migel homes were built around 1910 and designed by prominent Waco architect Milton Scott. In recent decades, they housed the drug rehabilitation programs of the Freeman Center, but those operations went out of business last year. Tunmire sought the Migel home earlier this year with the idea of establishing an events center and bed-and-breakfast, but the seller insisted on selling the two houses together.

Ken Hafertepe, a Baylor University preservation expert and member of the city’s historic landmark preservation commission, has argued that the Georgian-style Callan house has high architectural significance. But Tunmire contended that a proper renovation would cost at least $700,000, and there was no market for it.

“There was absolutely no interest whatsoever,” he said.

Don Davis, executive director of the Historic Waco Foundation, lamented the loss of the home but said it was probably unavoidable.

“I think we had over two years to try to come up with something to do with that house, and nobody could figure out what to do,” he said. “I’m glad they’re doing everything they can to save the pieces, and I like the plans that (Tunmire) is talking about.”

Davis said that in another city with more real estate demand, the home might have found a taker.

“It’s a unique house with a lot of history and beauty,” he said. “I don’t want to lose any more like that, but we probably will. The sooner we get downtown into a more viable place to live, we’ll have a lot better chance of saving some of these older houses.”

Historic Migel mansion under contract to be sold

The Migel House, built in 1910 at 1425 Columbus Ave. and fresh off a $1 million upgrade, is under contract to be sold to an out-of-town buyer.