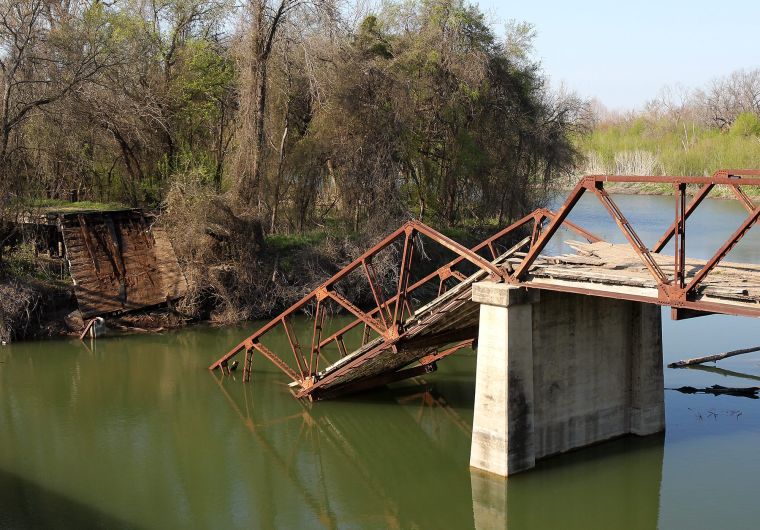 The old Eichelberger Crossing bridge, which is not used by motor vehicles, is a prime spot for anglers. 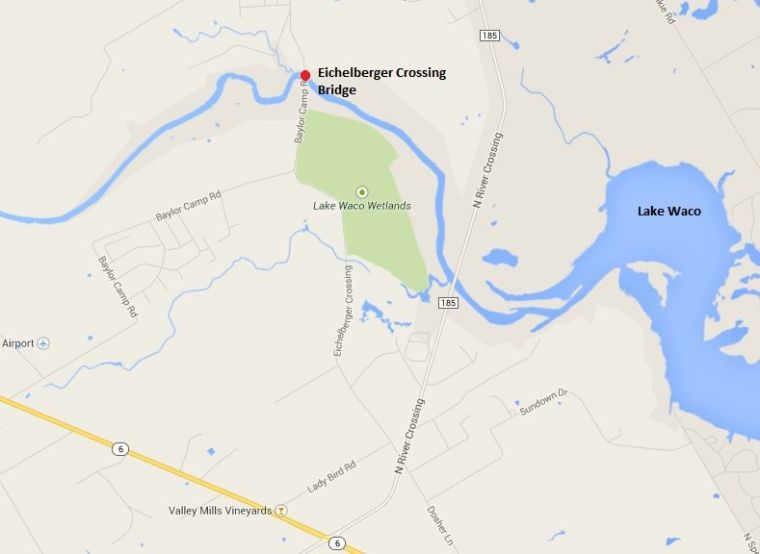 A portion of the Eichelberger Crossing bridge, popular with local anglers, collapsed earlier this week.

The old Eichelberger Crossing bridge, which is not used by motor vehicles, is a prime spot for anglers.

A portion of the Eichelberger Crossing bridge, popular with local anglers, collapsed earlier this week.

A portion of the Eichelberger Crossing bridge that spanned the North Bosque River for 89 years collapsed this week, placing the future of the historic bridge in jeopardy.

The bridge, which is off Baylor Camp Road just north of the Waco Wetlands, was built in 1925 by the Austin Bridge Co. for $8,021.27, according to county records.

It was closed to auto traffic, abandoned in 1981 and replaced by a new bridge in 1987 with the assistance of a federal grant. The old 275-foot bridge was left in place as a historical structure as part of the agreement for the county to receive the grant, County Engineer Steve Hendrick said.

“We suspect that the bank eroded out and exposed more of that support beam and it eventually just buckled,” Hendrick said. “It could have been hit by some debris, we just don’t know.”

Hendrick said county officials are checking with agencies that might need to be involved in any decisions before the collapsed span is removed from the river. He said the U.S. Army Corps of Engineers and the Texas Historical Commission will have to be involved because the historic bridge spans a navigable waterway.

Meadows said the wooden decking on the old bridge was destroyed by several fires after the county abandoned it.

“I’m sorry to say that this doesn’t surprise me,” Meadows said. “That’s why they closed it down 27 years ago. That old metal had got to be rotten by now, but there are a lot of deficient bridges all over this state. They were built in the ’20s and ’30s for Model A’s or lightweight tractors. But sometimes it takes something like this — or worse, a death — to get people to start looking at how dangerous some of these bridges have become,” Meadows said.

Current Precinct 4 Commissioner Ben Perry said he met Wednesday morning with heavy equipment operators to see what it might take to remove the fallen portion of the bridge. He said there will be a considerable amount of work done by his precinct crews just to provide access to the bridge site for the large crane.

He said he cannot speculate at this point what the operation might cost.

The county will keep the bridge closed to fishermen at least until it can get the remaining part of the bridge inspected for structural integrity, Perry said.

“We are committed to seeing what we can do to keep that access point to outdoorsmen there, but until we get it inspected, we can’t let anyone on it right now. We will have to keep it closed for now,” Perry said.

Perry said the collapse comes at the worst time for fishermen, who use the bridge to get access to the river for the springtime run upstream by white bass to lay their eggs.

The bridge was named for the Eichelberger family, which settled in that area of McLennan County in 1853, according to “The Handbook of Waco and McLennan County, Texas.”

Local agencies are pointing fingers over whose responsibility it is to clean up a growing logjam surrounding the old, partially collapsed Eich…