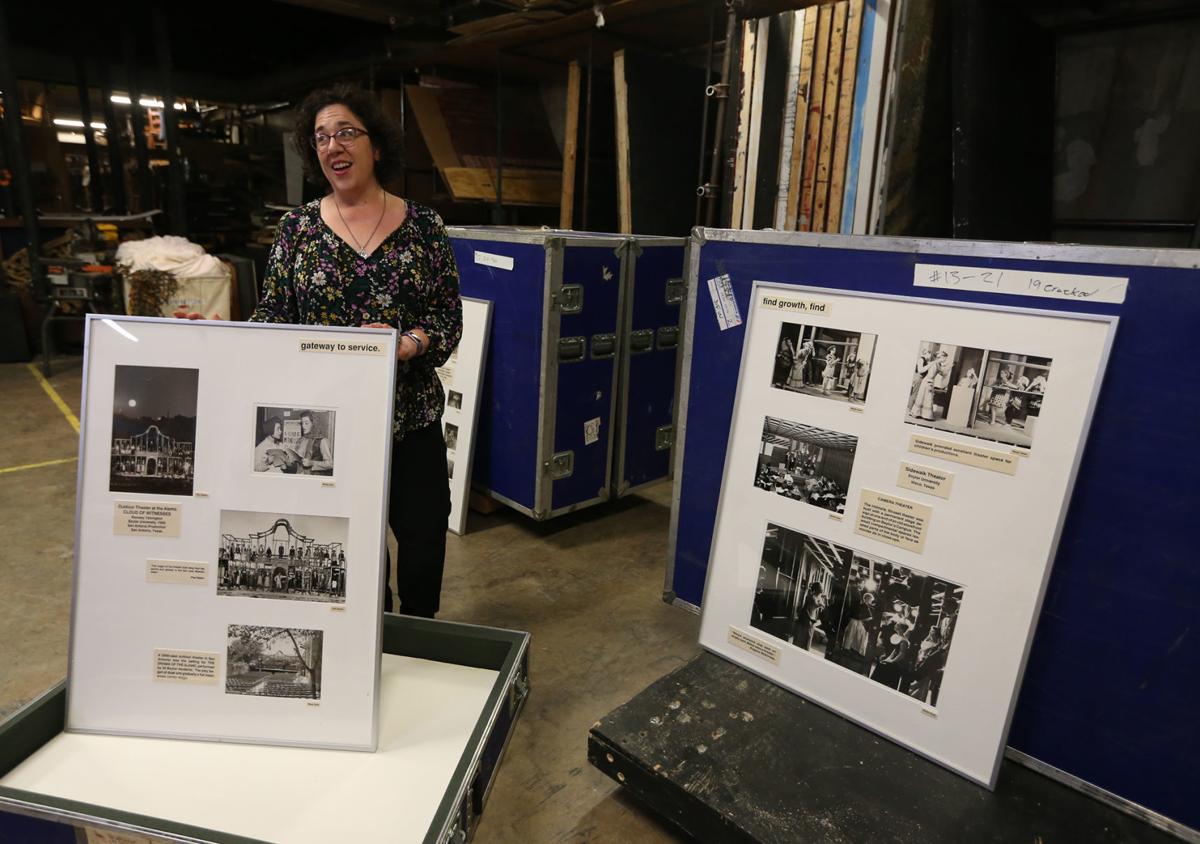 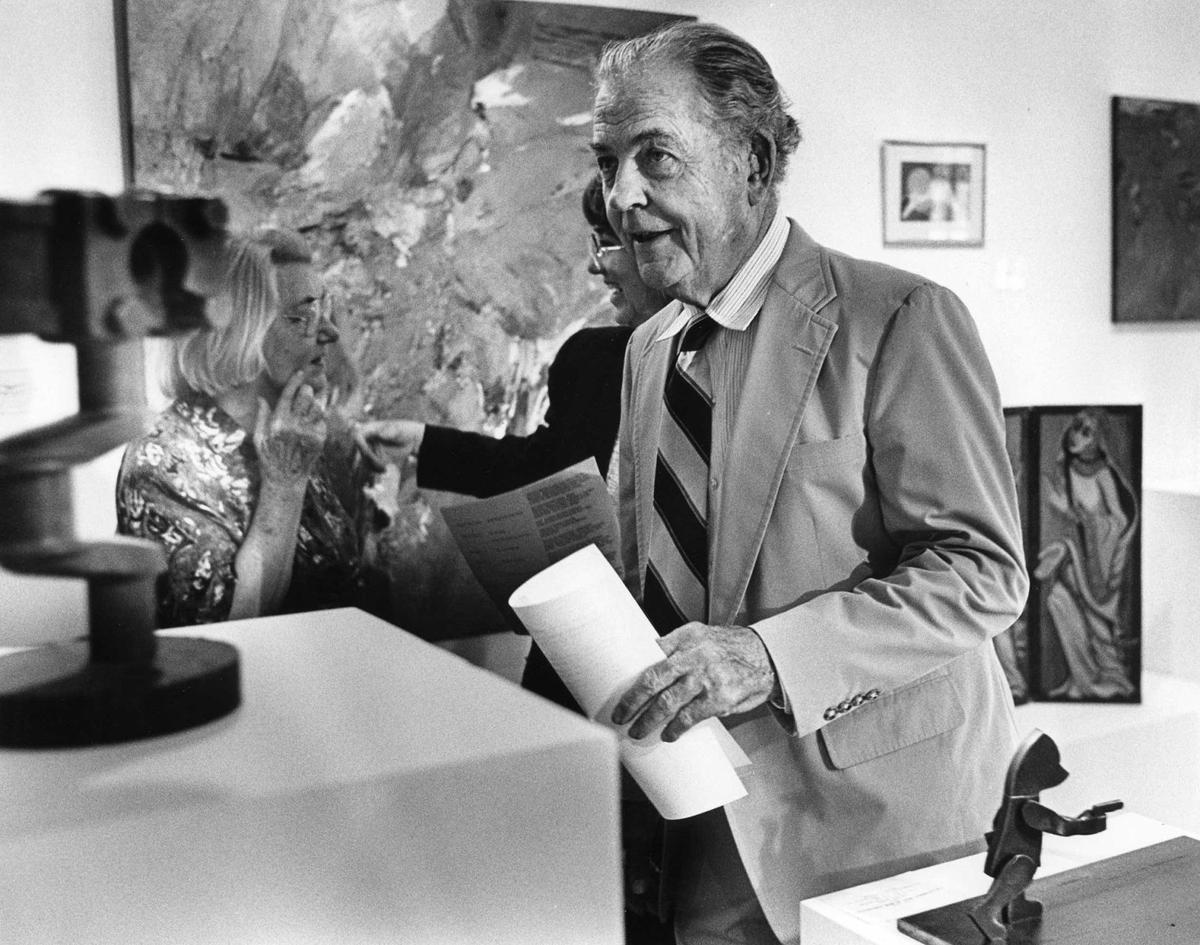 Former Baylor Theatre Director Paul Baker visits the Art Center of Waco during a 1990 reunion of faculty, students and staff. A photo exhibit created for the event, which was held away from Baylor, has found a new home at the university Baker left in protest. 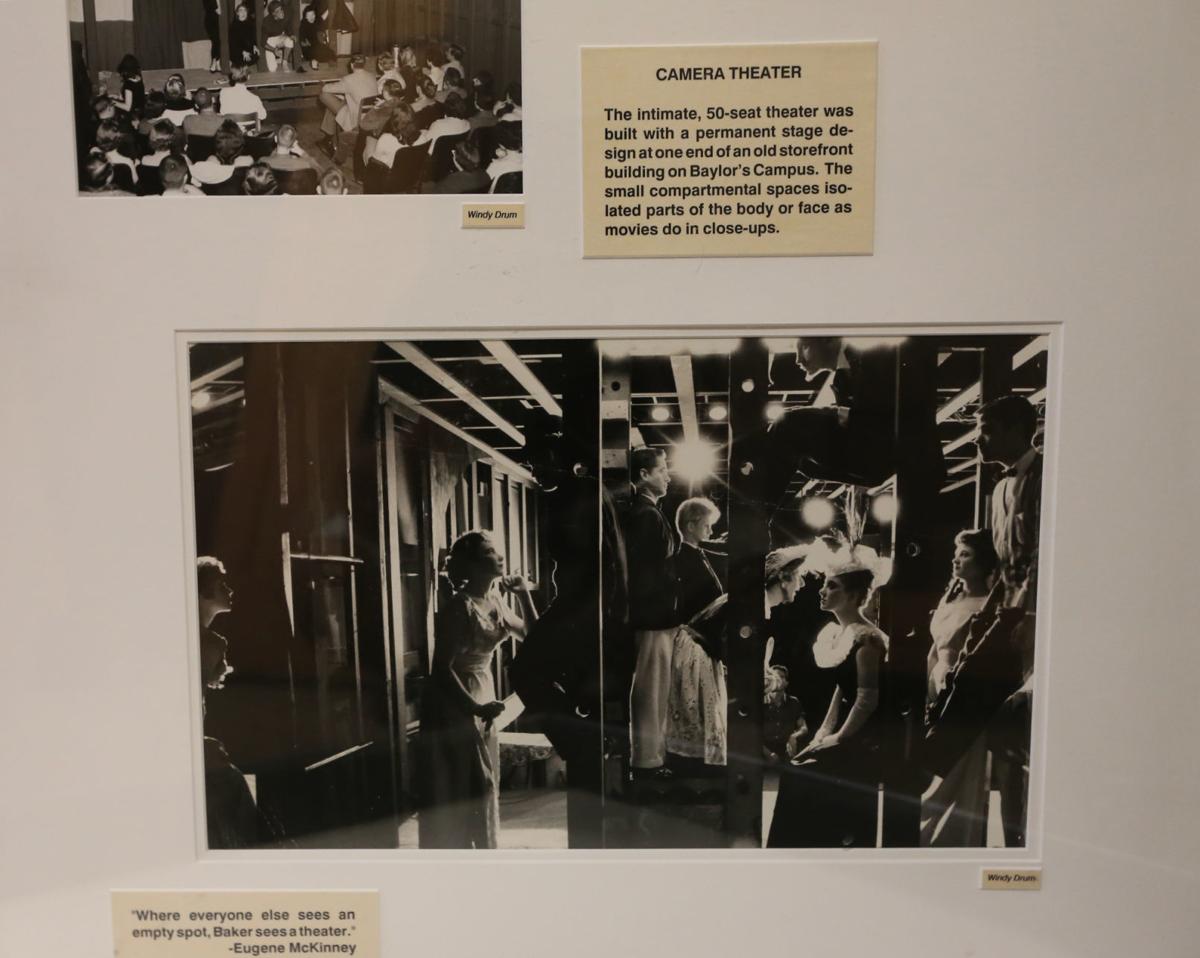 Waco photographer Windy Drum captured the front and back looks of Baylor’s Camera Theater during the Paul Baker years. 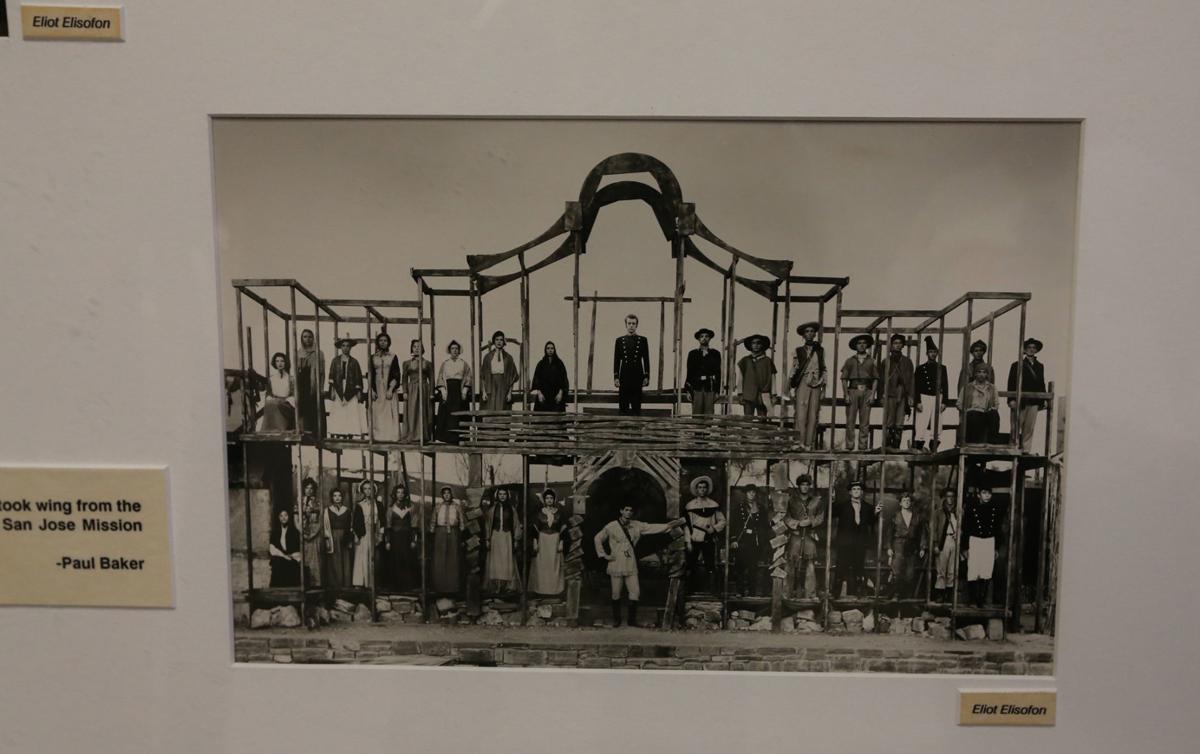 Baylor Theatre became known for innovative staging and design, including in its production of Ramsey Yelvington’s “A Cloud of Witnesses: The Drama of the Alamo.” 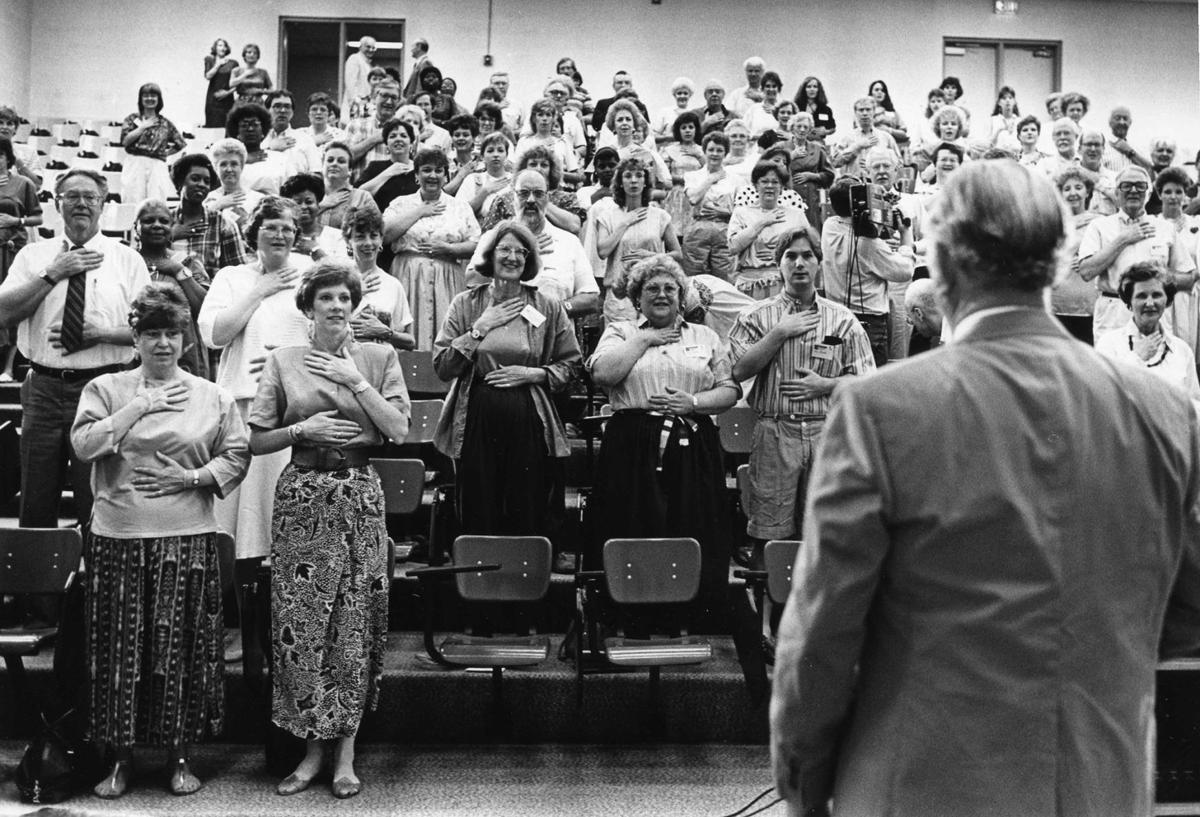 Director Paul Baker leads Waco teachers in a theater exercise during a 1990 visit. 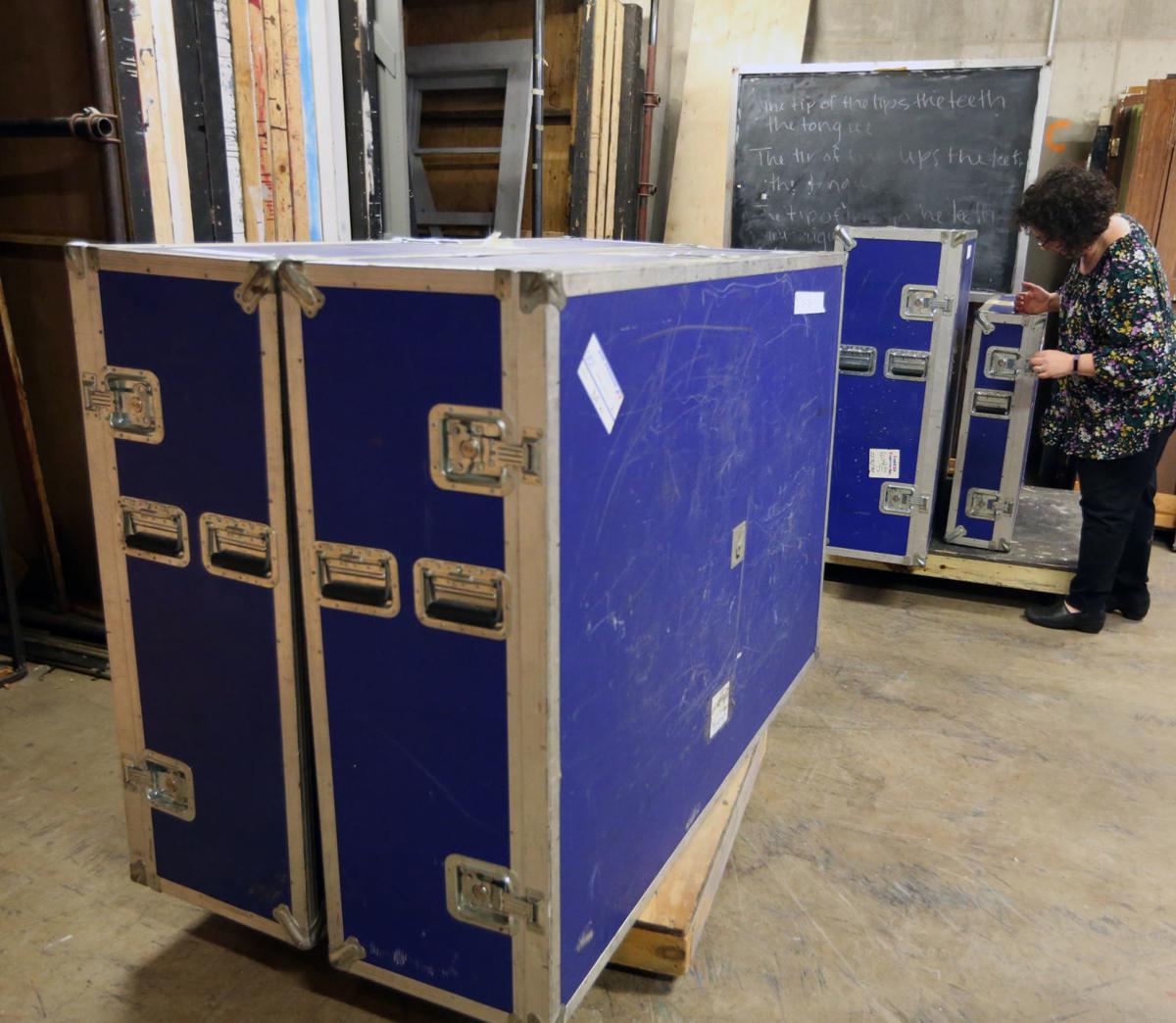 Former Baylor Theatre Director Paul Baker visits the Art Center of Waco during a 1990 reunion of faculty, students and staff. A photo exhibit created for the event, which was held away from Baylor, has found a new home at the university Baker left in protest.

Waco photographer Windy Drum captured the front and back looks of Baylor’s Camera Theater during the Paul Baker years.

Baylor Theatre became known for innovative staging and design, including in its production of Ramsey Yelvington’s “A Cloud of Witnesses: The Drama of the Alamo.”

Director Paul Baker leads Waco teachers in a theater exercise during a 1990 visit.

Some 57 years after theater pioneer Paul Baker left Baylor University in a storm of controversy, a photo exhibit detailing his theatrical legacy is, surprisingly to some, finding its home back at the Baylor Department of Theatre Arts.

Created for “The Paul Baker Festival — Second Harvest,” a 1990 Waco reunion of Baker, his students, friends and family, the exhibit covers the span of Baker’s career from his years at Baylor, where his creative philosophy and innovative eye drew international attention, to his years with Dallas Theater Center, which he founded, and time at Trinity University.

Baker, who died in 2009 at the age of 98, was a leading figure in American regional theater from the 1940s to the 1980s, known for a restless creativity, compelling personality and theatrical innovation that put Waco and Dallas on the theatrical map.

His time at Baylor ended famously in 1962 when he and Baylor University President Abner McCall clashed over the theater department’s production of Eugene O’Neill’s “Long Day’s Journey Into Night.” Baker secured the rights to the play from O’Neill’s widow with the proviso that the play be presented as written.

The Pulitzer Prize-winning play, a study of a dysfunctional family beset by alcoholism, womanizing, addiction and illness, ran four performances before complaints about its language and subject matter caused McCall to shut it down. In protest, Baker, his wife and most of the Baylor Theatre faculty quit several weeks later, ending up at Trinity University. The controversy was perceived as one over free speech and artistic integrity, though years later Baylor administrators with knowledge of the incident framed it more as a clash of strong personal wills.

It took Baylor Theatre years if not decades to recover from Baker’s departure, and the split left hard feelings that rippled as long in both Baylor and Waco theater communities.

Organizers of the “Second Harvest” reunion opted to hold it away from Baylor. A decade later, Baker returned to Baylor for part of a two-day celebration of Baylor Theatre’s centennial anniversary in 2001, which Waco Tribune-Herald reporter Jason Embry reported at the time as Baker’s first formal invitation from Baylor since his departure.

In that article, Baylor President Emeritus Herbert Reynolds said he had not invited Baker back during his tenure as president out of his respect for McCall, but felt the time was right for Baker’s return visit in 2001. Reynolds served as president from 1981 to 1995. McCall died in 1995.

For much of the time since the 1990 “Second Harvest” festival, the sprawling photo exhibit, more than 60 black-and-white photos mounted on 4-by-8-foot panels, had remained in storage at the Art Center of Waco at McLennan Community College.

Art center board members’ decision in fall 2017 to move to a downtown location, however, left the Baker exhibit’s future in limbo as the center downsized its holdings for the impending move.

Virginia DuPuy, a Baker student and his office manager from 1955 to 1959, after her time at Baylor, had helped Baker’s wife Kitty pick the photos for the exhibit back in 1990 from Kitty’s personal collection. When Art Center staff notified DuPuy about their intent to return it to its owners, DuPuy started to scramble.

The Texas Collection did not have the storage space, nor did The Wittliff Collections at Texas State University, which has most of Baker’s letters and papers. It looked like the exhibit’s fate would mean dismantling the panels and digitizing the photographs.

“I was in a real panic that we couldn’t find a permanent home for this,” DuPuy said.

The exhibit traveled to Dallas for one last exhibition, and DuPuy decided to contact DeAnna Toten Beard, chair of Baylor’s theater department, to see if Baylor would like to show it one last time. Toten Beard’s answer surprised her: The theater department would welcome the exhibit and store it indefinitely as a resource for students and researchers.

“I was shocked when DeAnna started pulling out Dr. Baker’s book (“The Integration of Abilities”) and said, ‘He’s part of our Baylor history,’” DuPuy said.

Toten Beard said the photographs, many from the Bakers’ personal collection, and the story connecting them are a valuable resource for theater scholars and part of the heritage of today’s Baylor theater students.

“Its value is to connect current students to the history of Baylor Theatre and the significance of what they know as their family history,” she said. “It’s a rich research resource that shows the richness of what was happening in theater in the 1950s.”

During his years at Baylor, Baker and his students became known for innovative approaches in theater design, including Studio One with swiveling seats for audiences to follow onstage action and a stage framing actors like a Mondrian painting. He won national attention for a 1956 production of “Hamlet” starring Burgess Meredith that split the title role into three personas, and was known for a teaching approach that encouraged creativity, experimentation and multiple skill training.

“He helped you tap in what you had before learning … to create your own integrated ability to tackle problems bigger than you,” said DuPuy, one of those Baylor students. “I think he convinced everyone, ‘You can do it.’”

The photo exhibit features shots from the Baylor productions of Gene McKinney’s “A Different Drummer” and Ramsey Yelvington’s “A Cloud of Witnesses: The Drama of the Alamo” as well as Baker’s later work with the Dallas Theater Center, including its staging of Preston Jones’ “A Texas Trilogy.”

Toten Beard said the exhibit likely will stay in storage with segments pulled out as needed for research or an occasional public display in the Hooper-Schaefer Fine Arts Center.

For Baker’s daughter Robyn Flatt, co-founder and executive artistic director of the Dallas Children’s Theater, news that the photo exhibit had found a home at Baylor came as a pleasant surprise.

“We thought all ties had been severed with Baylor over the years,” Flatt said. “It’s just amazing, but DeAnna Beard is a historian, and a historian knows the value of understanding the history of a place.”

Flatt had lost track of the photo exhibit in the years after its Waco showing and was delighted to hear last year it still existed.

“We knew it was some place in Waco and bless their hearts, (the Art Center) had kept it all this time,” she said.

She and her sister Retta came to Waco to inspect the work, anticipating that the photographs would show the effects of two decades in storage. She was shocked when the panels were pulled from their boxes. The photographs, they discovered, had been mounted on acid-free mats under plexiglass and kept in airtight shipping crates.

“We just gasped. Those panels were almost pristine,” Flatt said. “We just about fell out.”