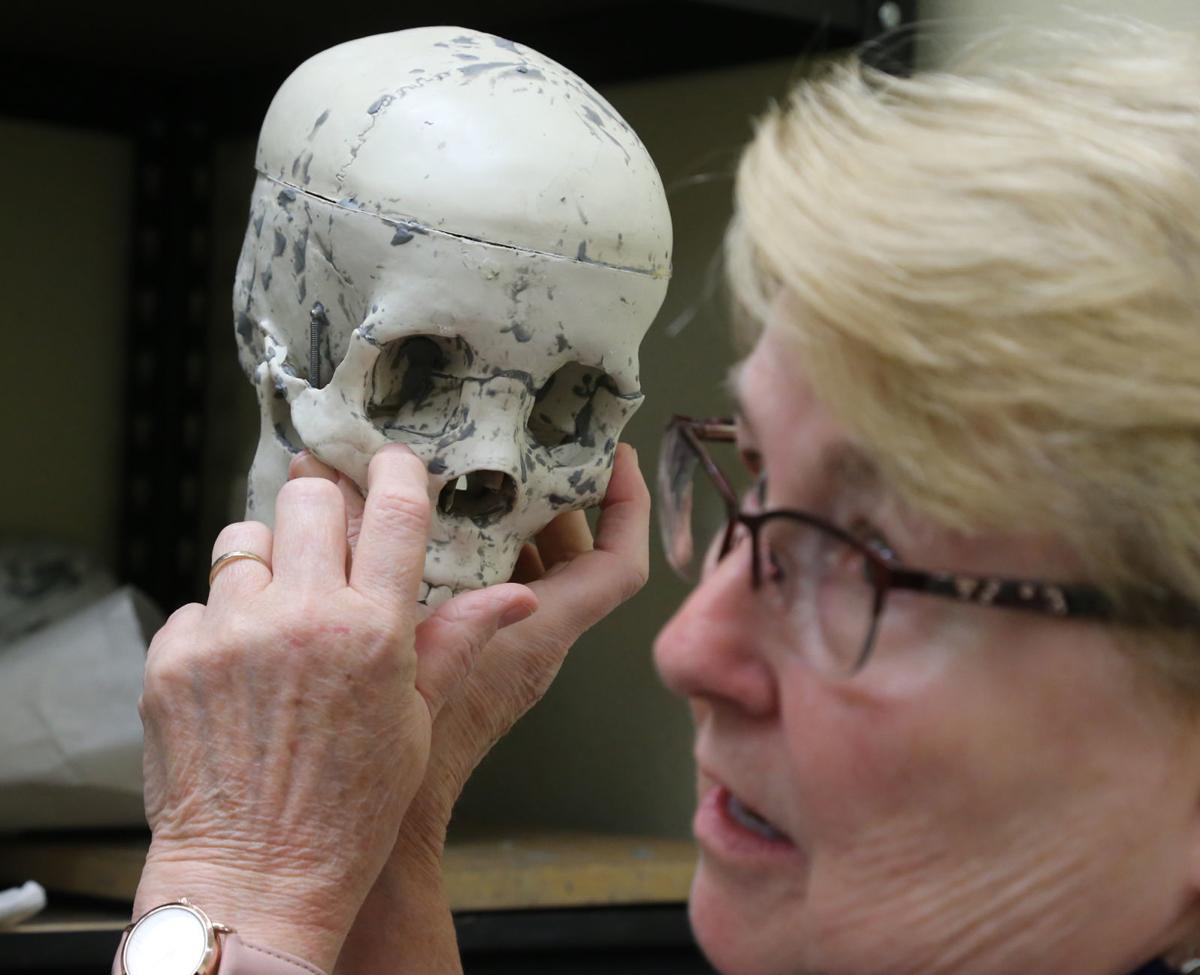 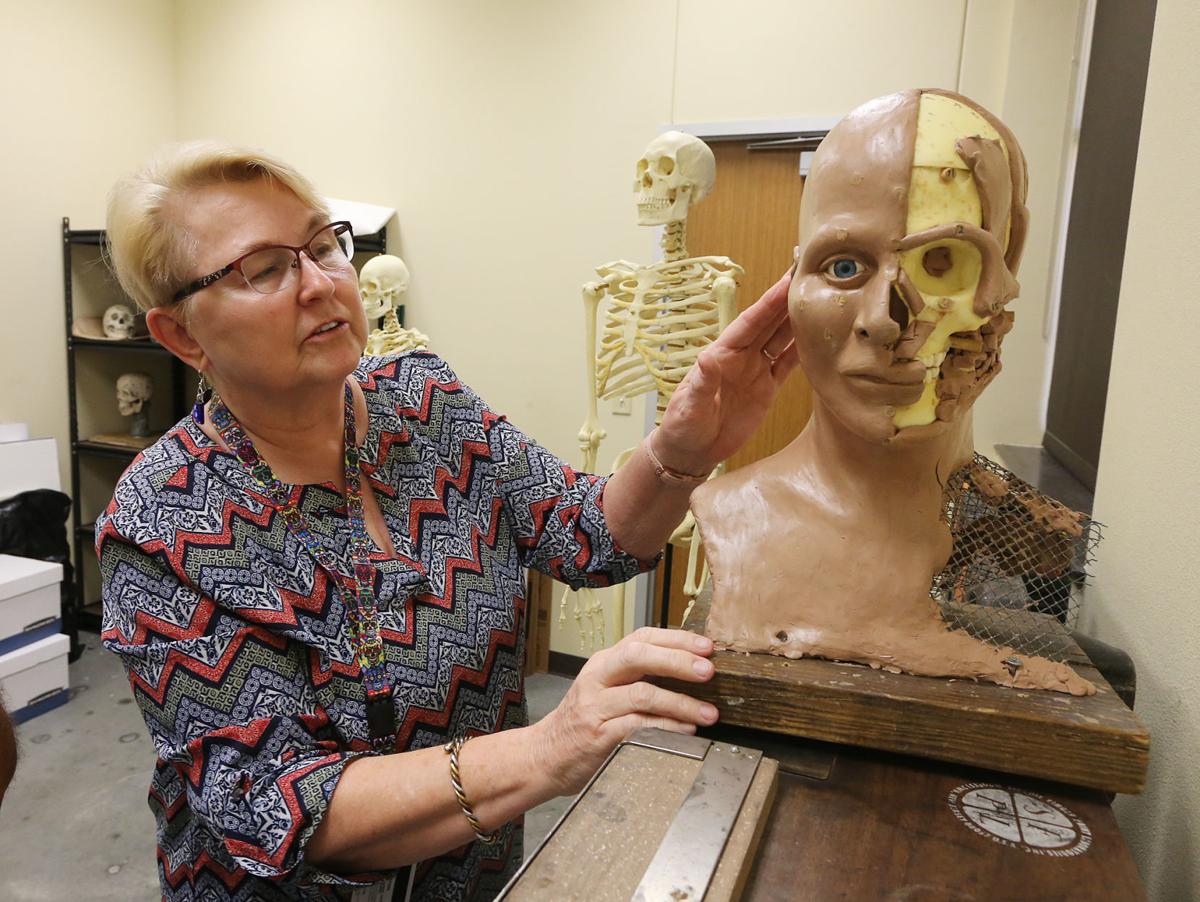 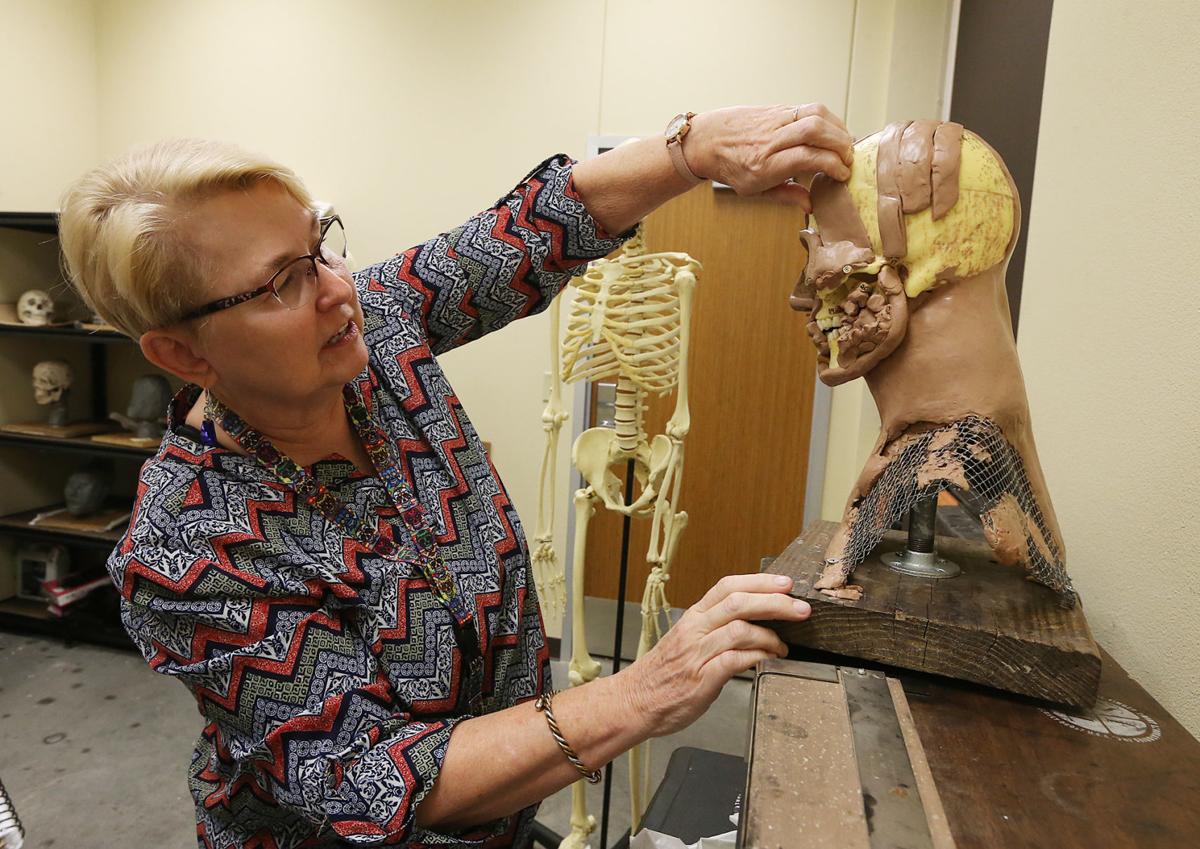 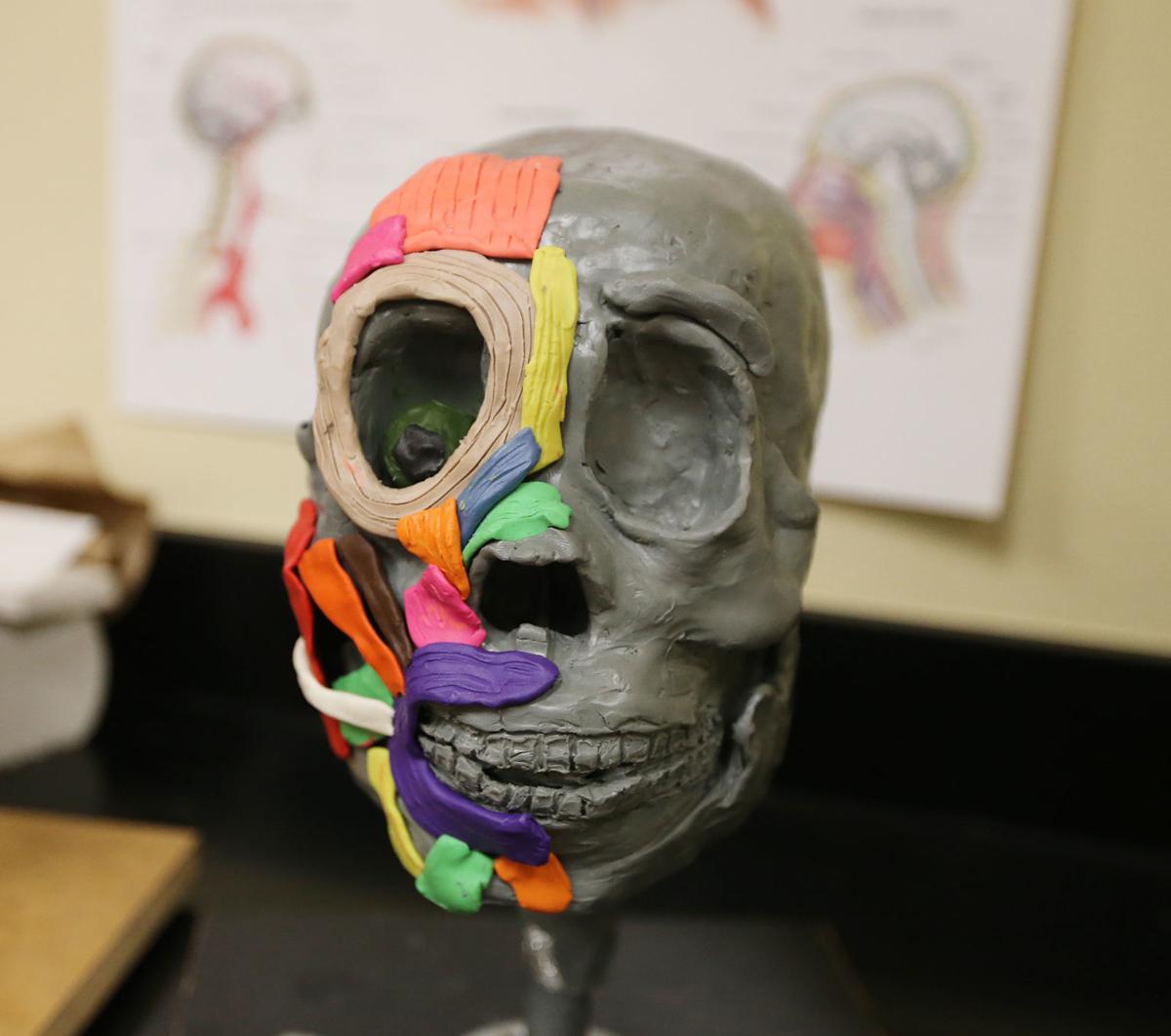 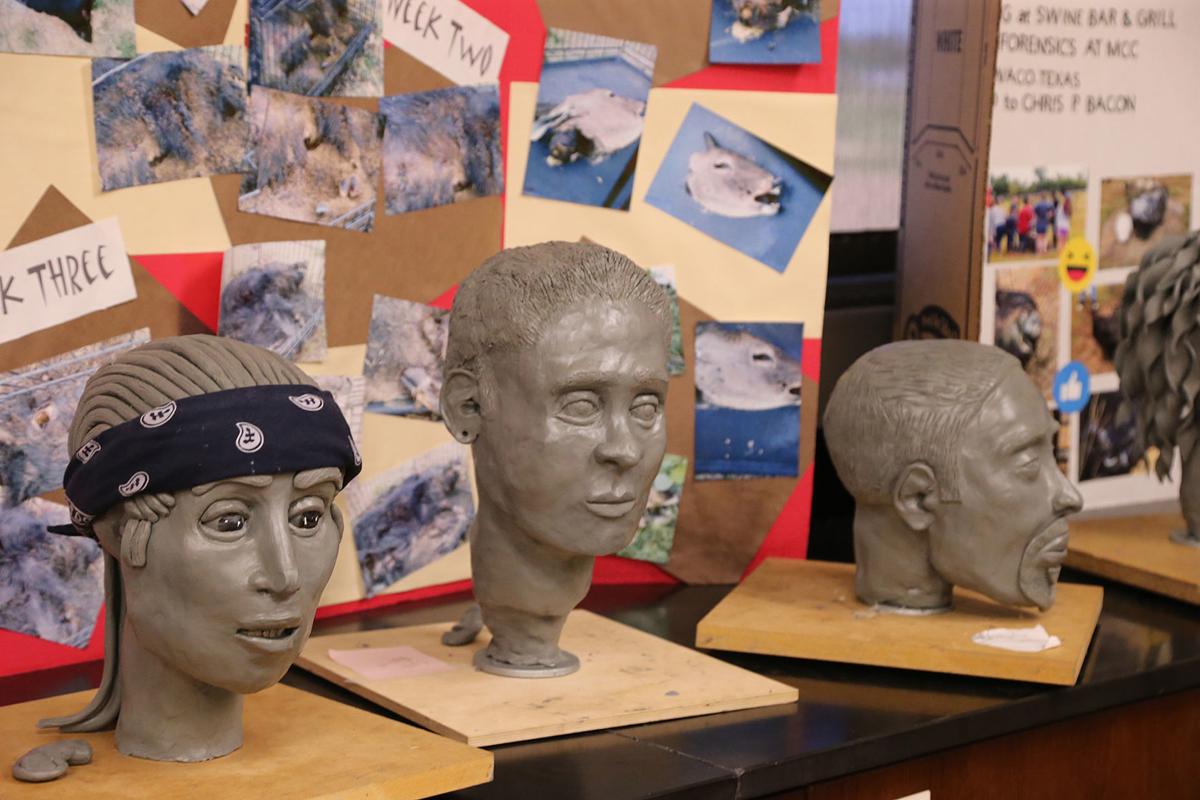 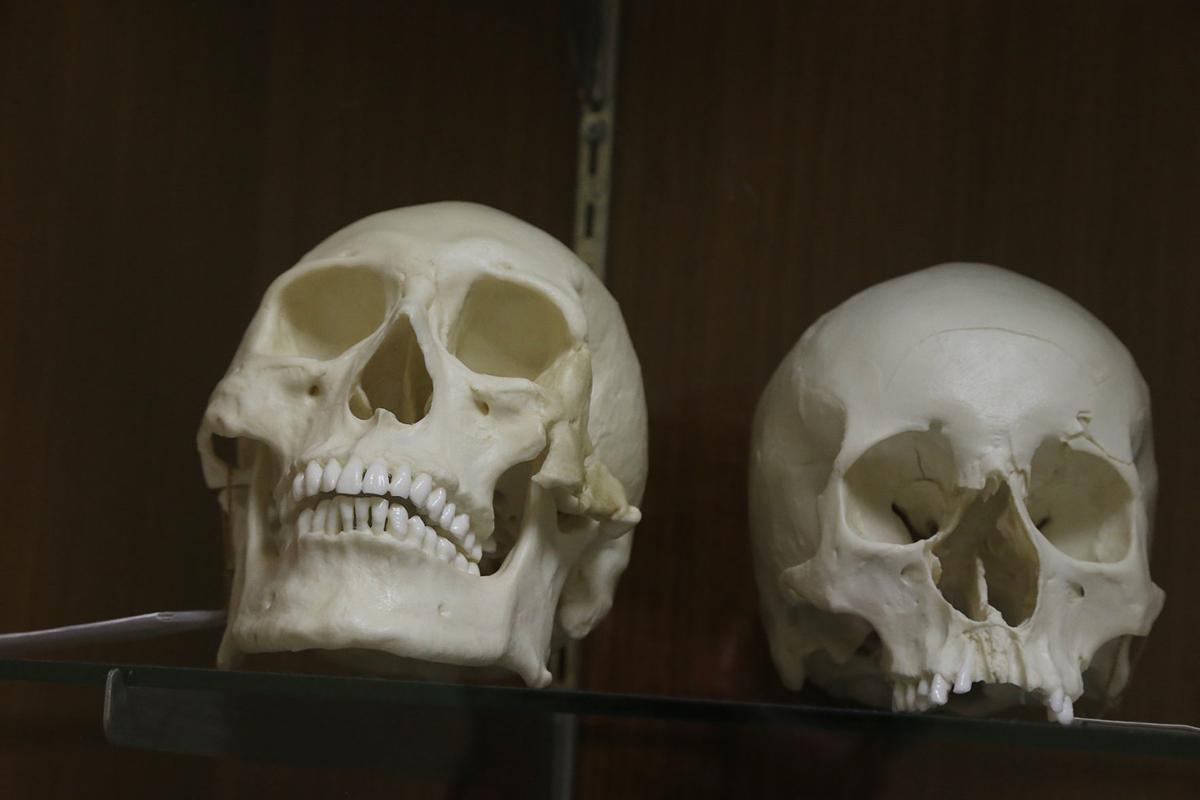 Models of actual skulls tell stories of injuries and death.

Models of actual skulls tell stories of injuries and death.

She is also good at the stories those skulls and faces tell, and her skills as a forensic artist have helped solve murders and disappearances, and have imagined the fate of Native Americans who died centuries ago.

For the last 10 years, the 70-year-old Baldon has shared those skills and insights with students in her forensic anthropology, criminalistics and forensic science classes at McLennan Community College. The associate professor of criminal justice trains them how to look for details in physical evidence that can tell a story to police investigators, anthropologists or archaeologists. That story is more focused in the case of facial reconstruction from a skull or bone fragments: Who was this person?

Some of Baldon’s students go on for additional training in MCC’s Law Enforcement Academy located, like her classroom and lab, in MCC’s Emergency Services Educational Center. Others take her class out of interest in criminal forensics, thanks to its frequent use in television crime series including CBS’s long-running “CSI: Crime Scene Investigation” and its spin-offs.

Television, after all, got Baldon in the field, with the seed planted by an episode of “Quincy M.E.,” a 1970s dramatic series starring Jack Klugman as a Los Angeles medical examiner. The episode in question featured a forensic artist reconstructing a victim’s face using clay molded over a skull, which Baldon found fascinating. She was raising four children at the time and had put her art studies at Kilgore College on pause.

Time and circumstances would see her ultimately finish her undergrad at the University of Texas at Tyler; share an apartment with a private investigator, whose reports she helped type; switch studies to anthropology, later teaching at Tarrant County College and the University of Texas at Arlington; discover her knack for portraiture was handy for 2-D facial reconstruction work with the Tarrant County Medical Examiner’s office; and cemented her work in forensic art with further specialized study in the 1990s.

Among her instructors in the latter were Texas Department of Public Safety forensic artist Karen Taylor and Oklahoma forensic artist Betty Pat Gatliff, a pioneer in the field of facial reconstruction and the real life forensic artist on which the “Quincy” episode was modeled.

“Little did I know that 20 years later I would be in Betty Pat’s class,” Baldon said.

In 2009, Baldon and her husband Paul moved to the Waco area for his job as natural resource coordinator for the Texas Parks and Wildlife Department. She started as an MCC adjunct and has worked herself up to associate professor. MCC Law Enforcement Academy Coordinator Dennis Stapleton, who works on the same floor as Baldon, said she is not only a skilled forensics teacher, but has steered several students into the academy and law enforcement careers.

Facial reconstruction from a skull has limitations, primarily that there is little to indicate the appearance of soft tissue — lips, ears, moles — and hair color, texture and style. Similarly, nothing in Baldon’s own underlying skull could suggest her frequent smiles or the twinkle in her eye when she is talking about her craft.

That said, a skull holds details such as bone size and positioning that a skilled interpreter uses to imagine the face it once supported. Orientation of a bone point in the nasal orifice, for instance, predicts the width of the lip underneath. The position of one’s canine teeth helps establish the corners of the mouth. The distance between gum lines sets mouth width. The location of ear holes in the skull determine ear placement.

“It’s like the foundation of a house,” Baldon said.

A nearby hallway display cabinet shows models of actual skulls demonstrating other details that add key information including shotgun pellets embedded in the forehead, bone deterioration caused by syphilis, and, in the case of an ancient Peruvian skull, a scar the size of a large apple slice where the top of a skull had been cut away, then partially healed over.

Baldon teaches her students the American method of facial reconstruction which she learned from Gatliff, which involves working with a single layer of clay placed over a skull and sculpted into features. The European method starts with clay muscles underneath, then clay skin over that.

Markers placed at specific points on the skull specify tissue depth, and the clay layer is shaped accordingly. Soft tissue features such as noses, chins and eyebrows are sculpted next with the person’s hair imagined and added.

Baldon stressed that the final result may not look exactly like the person, but approximation is as useful as accuracy. A three-dimensional head sometimes can trigger memories better than a drawing or a photograph.

“Forensic art has a job to do,” she said. “It’s a tool to help get somebody identified.”

Baldon’s reconstructions have helped in the murder investigation of Dana Leigh Taylor, whose skeletal remains were found near Elm Mott in 2006, and the disappearance of Hillsboro resident Kenneth Glaze, missing for more than 40 years, among others.

Clay-covered skulls from students’ reconstruction exercises sit on countertops surrounding Baldon’s spacious forensics lab, joined by other examples of forensic study: a three-panel display of hog decomposition; another display about a Waco suicide by poison gas in a car; and a model of serial killer John Wayne Gacy’s house with miniature dolls locating where his victims’ bodies were found.

A door opens into “the blood spatter room,” where other aspects of forensic investigation are taught. The room has ordinary objects used to measure or recreate unordinary events. A ball of yarn is unwound to determine blood trajectory from a victim, a manikin in the case of the classroom, and a plastic protractor is employed to measure trajectory angles. A nearby table top holds panes of safety glass hit by a hammer or other hard object to see shatter and splintering patterns made by forceful impact.

”We just have the best time in here,” Baldon said cheerily.

The manikins in the blood spatter room would not say the same. A male manikin splashed with blood sits slumped in a chair while a female manikin, fake blood pooling under her, lies nearby. Large sheets of white paper on the wall and floor under them are spangled in red.

”Students have to come up with a crime scene and it has to make sense,” the forensics instructor said.

A glance at the scene tells the story: Wife comes home, catches her cheating husband with his lover and bloody violence results.

”So, a lot of rage involved here,” she deadpanned.

Outside the blood spatter room, Baldon points to a vapor chamber used to reveal fingerprints on objects. Nearby is a 3-D printer students can use to create small objects for display or visualization. Technology has transformed forensic science over the years, and many investigators now use digital software to create 2-D facial reconstructions, Baldon said. With 3-D printers, the technology exists to produce 3-D reconstructions in place of the clay-over-plastic models that Baldon and others employ.

Regardless of the technique or technology employed, the end result remains the same, she said. Even if an identification by facial reconstruction does not result in a crime solved, it helps answer the question: Who was this person?

“Families will find closure,” she said.