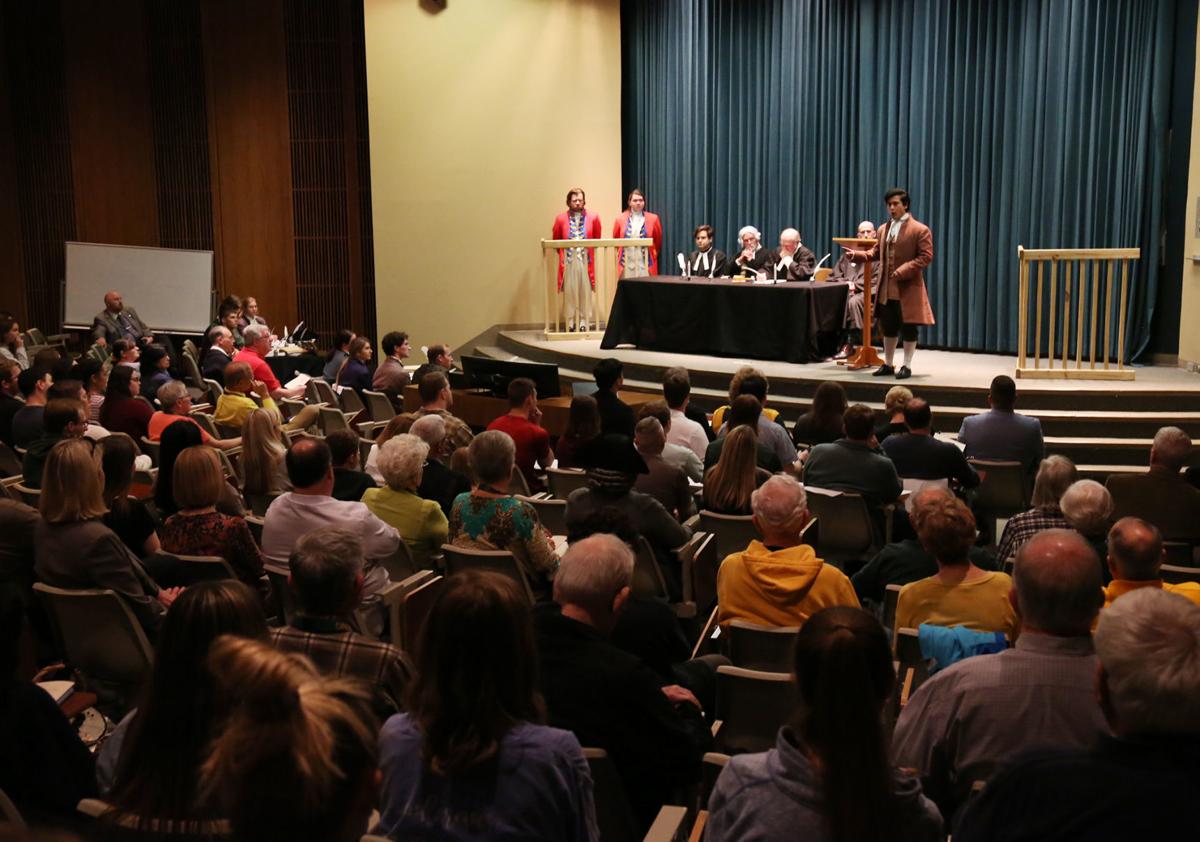 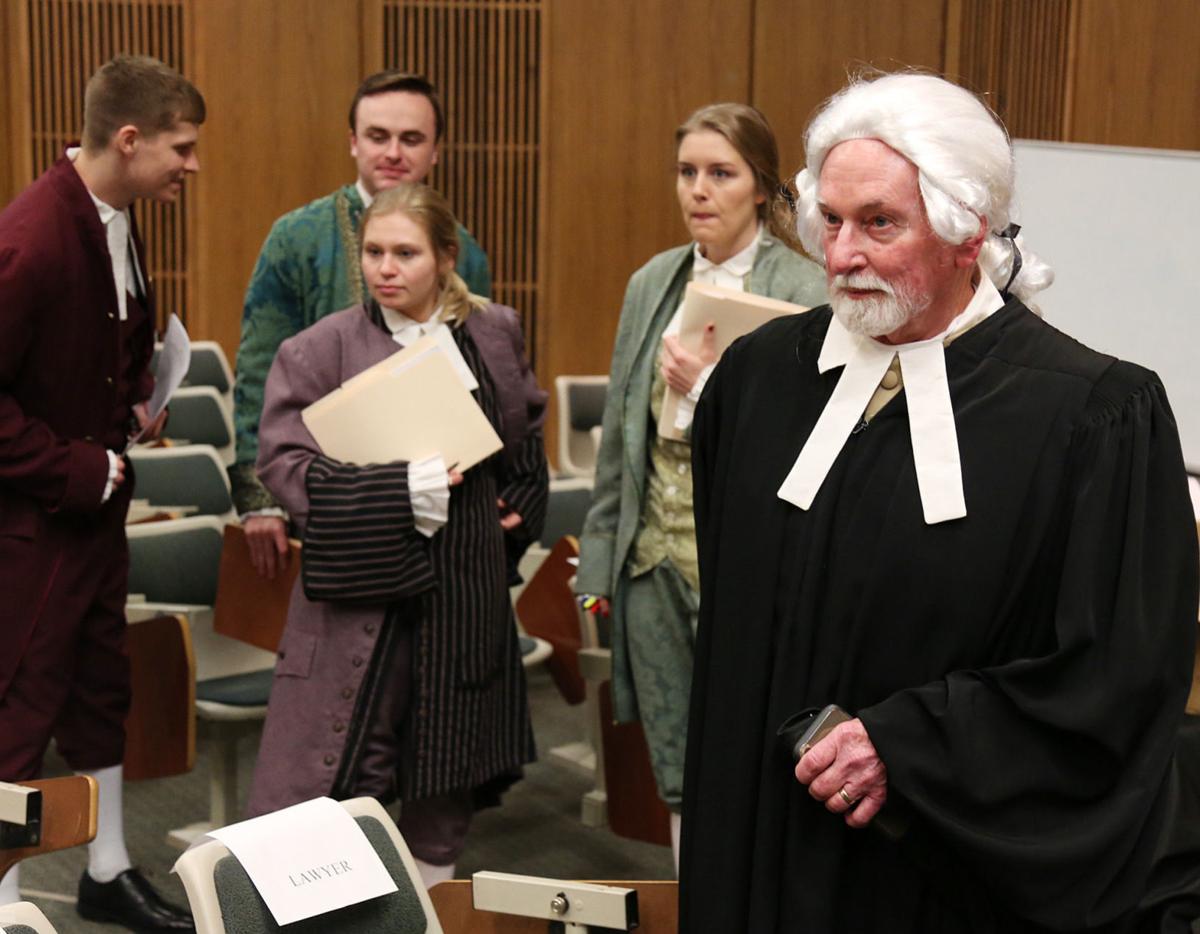 19th State District Judge Ralph Strother (right) and Baylor students wait for a reenactment of a Boston Massacre trial to start Thursday, the 250th anniversary of the shooting that left five dead. 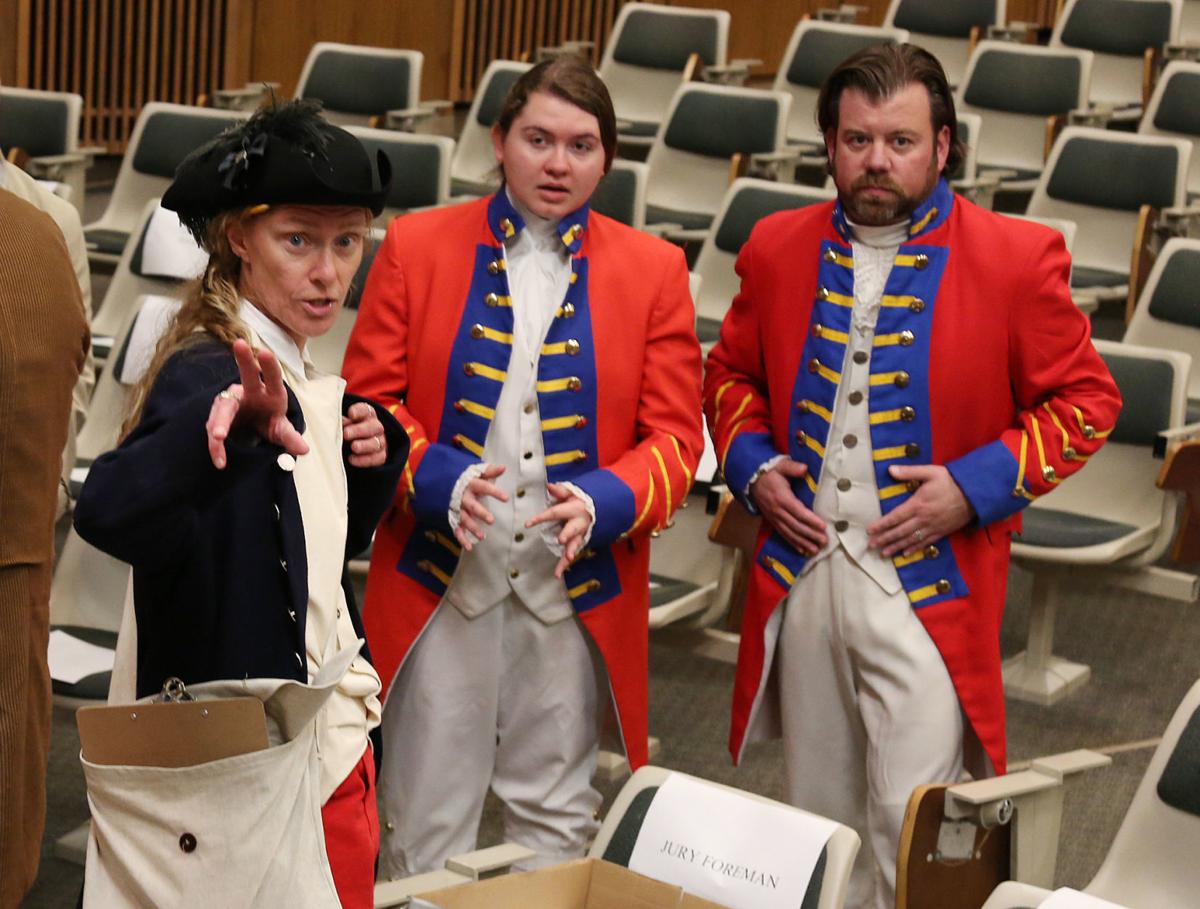 Baylor history professor Julie Anne Sweet (left) gives directions to students Katy Clevenger and Danny Dunn as they prepare to act as the defendants in a reenactment of a Boston Massacre trial Thursday. In the murder trial almost 250 years ago, the two British soldiers were found guilty of the lesser charge of manslaughter. The reenactment jury acquitted them. 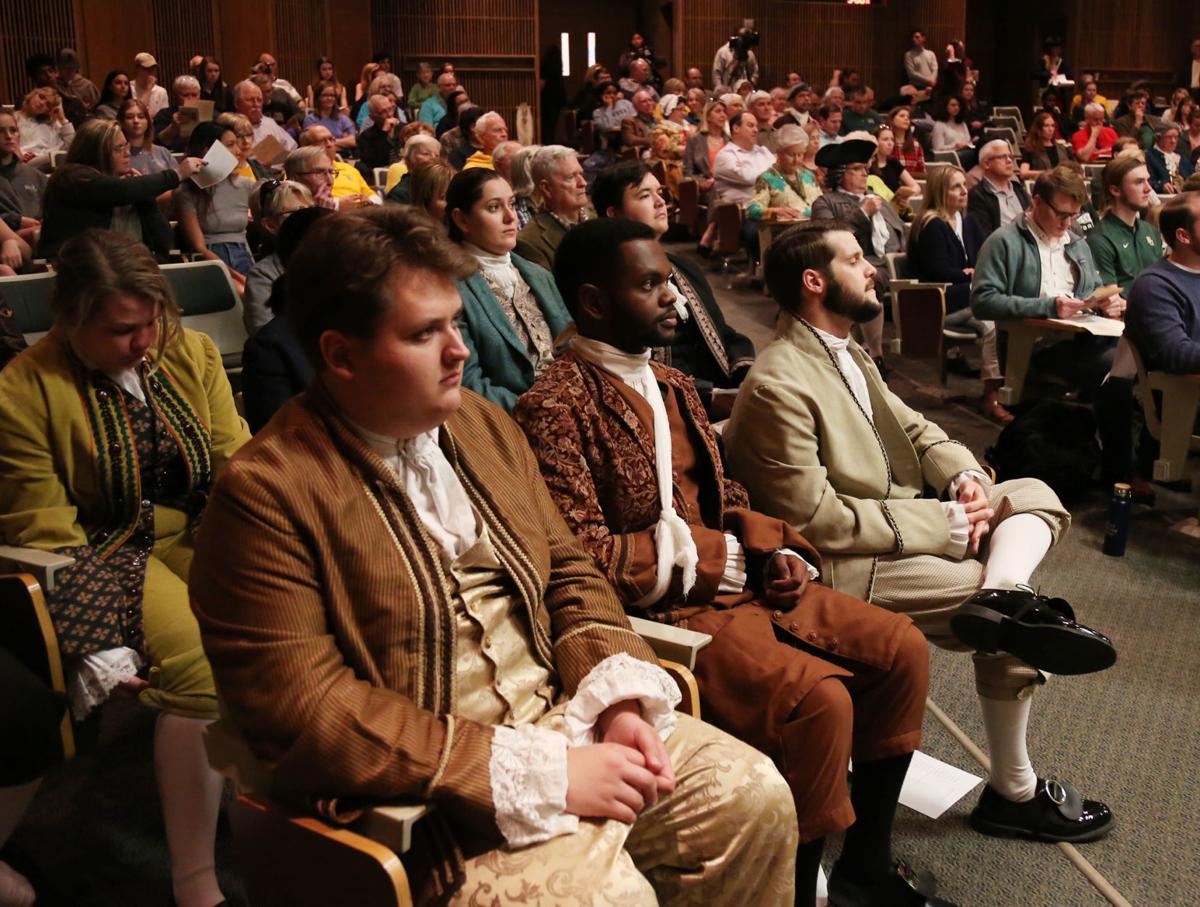 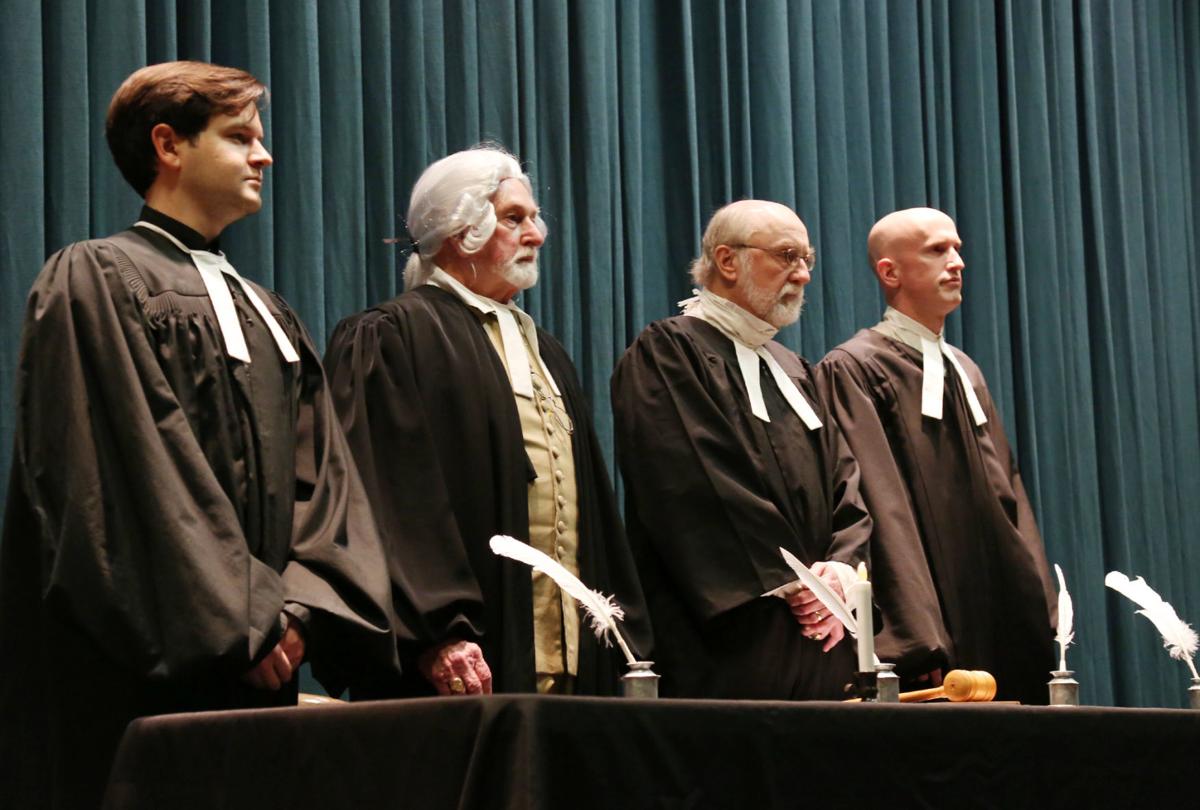 Kyle Garner, (from left) Ralph Strother, Gerald Powell and John Guinn played the role of judges for a reenactment of the Boston Massacre trial at Baylor. 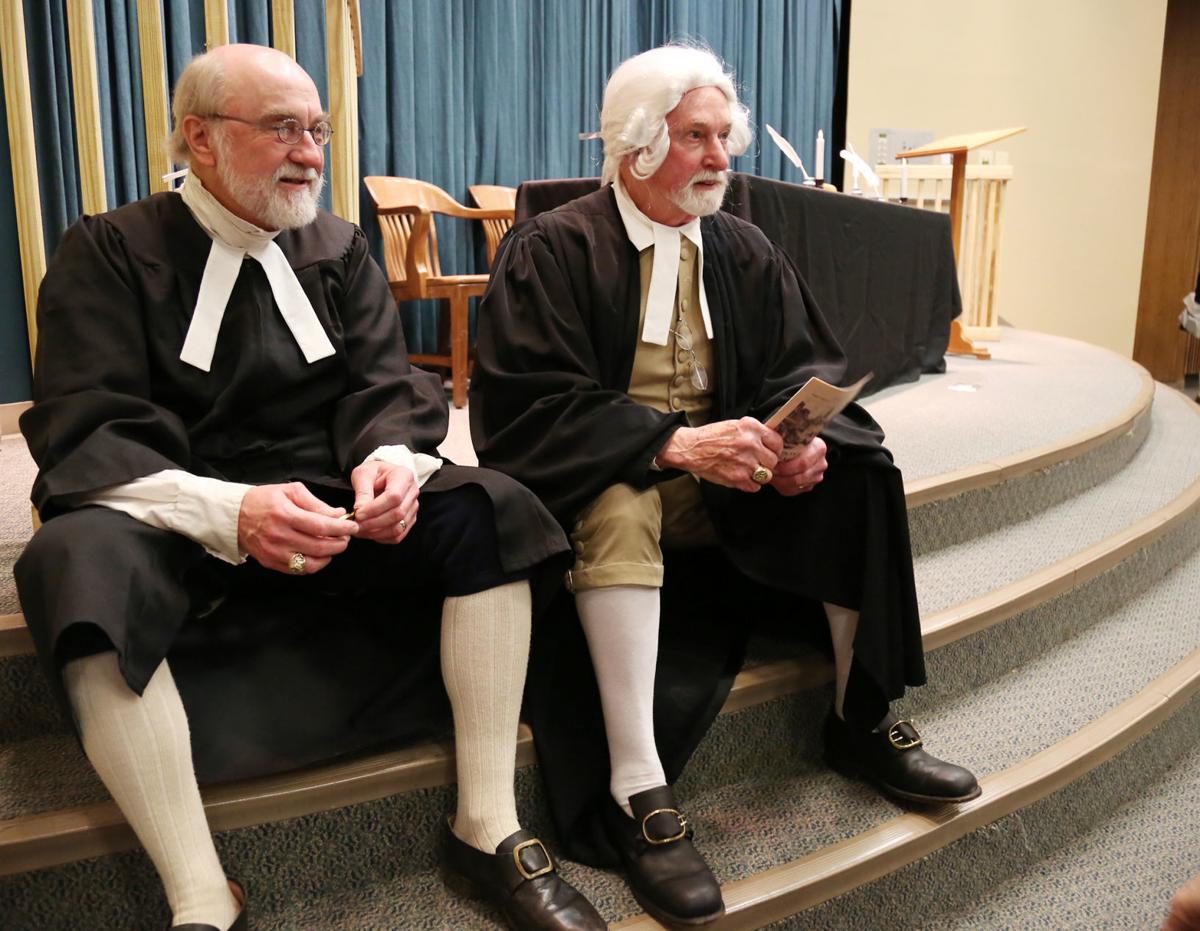 19th State District Judge Ralph Strother (right) and Baylor students wait for a reenactment of a Boston Massacre trial to start Thursday, the 250th anniversary of the shooting that left five dead.

Depending on your loyalties, the deadly clash 250 years ago between colonists and British soldiers that helped spark the Revolutionary War is known either as the Boston Massacre or the Incident on King Street.

The bloody skirmish on March 5, 1770, started when a group of Boston protesters attacked a British soldier who was among the troops occupying the city to enforce new laws on the American colonies. British soldiers opened fire on the crowd, killing five men.

Eight soldiers were tried for murder. Six were acquitted, and two were convicted of the lesser charge of manslaughter.

To commemorate the historic event, Baylor University’s Law School and History Department combined Thursday to “relitigate” one of the trials involving two of the soldiers in a historical interpretation based on accounts of the legal proceedings.

The students, professors and historical reenactors who took part in the two-hour presentation dressed in colonial garb, including 19th State District Judge Ralph Strother, who donned a white wig replete with a ponytail tied with a bow.

Baylor history professor Julie Anne Sweet served as narrator, telling the audience at Baylor’s Bennett Auditorium that the event was an “unscripted interpretation of what could have happened at the trial.”

Before law students Stefan Garcia of the prosecution team and Austin Dam, representing the defense, gave opening statements, Tom Riley, a retired Navy lieutenant commander acting as court clerk, read the indictment. The formal charge included the bombastic allegations that the defendants, “not having the fear of God before their eyes, but being moved and seduced by the instigation of the devil and their own wicked hearts,” killed the five protesters.

The soldiers pleaded not guilty, saying they would be “tried by God and my country.”

Strother, a voracious reader of historical nonfiction, said taking part in the reenactment was “very entertaining.”

“At the same time, there is an important lesson to remember about our system of justice,” Strother said. “And that is that everyone is entitled to a fair trial based as objectively as humanly possible on actual facts and evidence. It is part of our birthright earned and paid for with much blood, tears and treasure.”

Strother studied a copy of the original court’s instruction to the jury to prepare for his role. He said that while some of the language is archaic, any criminal court judge would recognize it today.

“The facts surrounding the Boston Massacre are fascinating,” Strother said. “It happened at night under the horrible conditions of the time — poor lighting, mass confusion, mass hysteria, mob mentality. I can imagine what it was like. Actually, it reminds me a little of the Twin Peaks (2015 biker shootout) mess. No one had a complete picture of what was happening or why. One toppling domino led to another with tragic results.”

“This is primarily a learning experience done in an entertaining way,” Powell said. “I think one of the messages, certainly for the purposes of the History Department and the undergraduate program, is that history is fun, history is interesting. It is not your granddaddy’s history where you memorize dates. It’s really an interesting thing, so we wanted to present it in that way. For my law students, this is an opportunity to get some trial experience, and they will try a case in any century.”

In the 1770 trial, some of the British soldiers were represented by John Adams, who later became the nation’s second president. The two convicted of manslaughter were given reduced sentences and were punished by branding an “M” on their thumb for manslaughter, Sweet said.

“Back in colonial times, jail was considered cruel and unusual punishment because of the condition in those jails,” Sweet said.

For the record, the jury comprised of Baylor history students acquitted the two soldiers on trial Thursday.