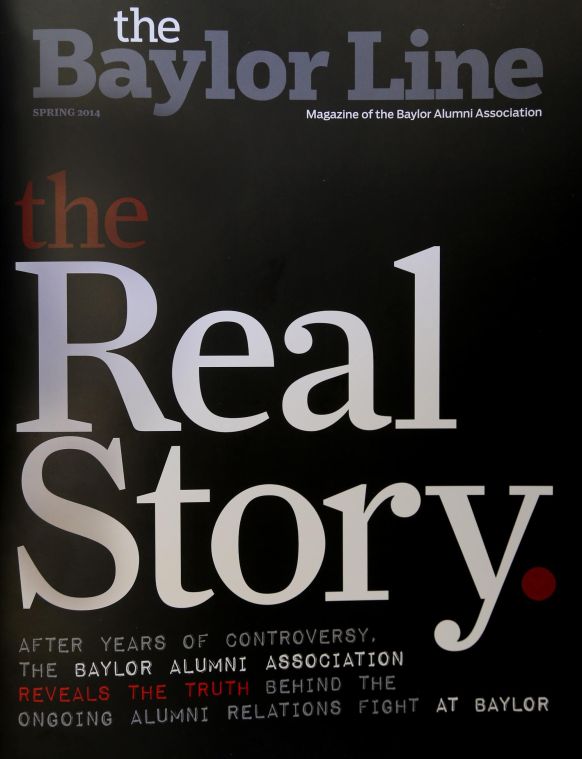 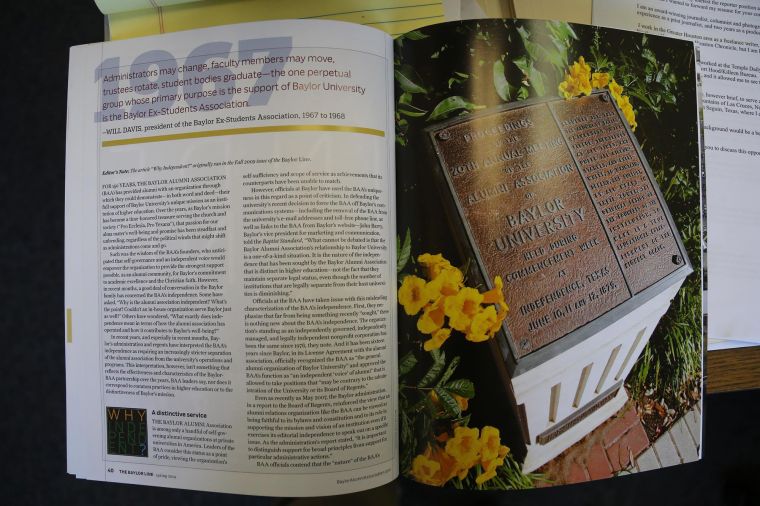 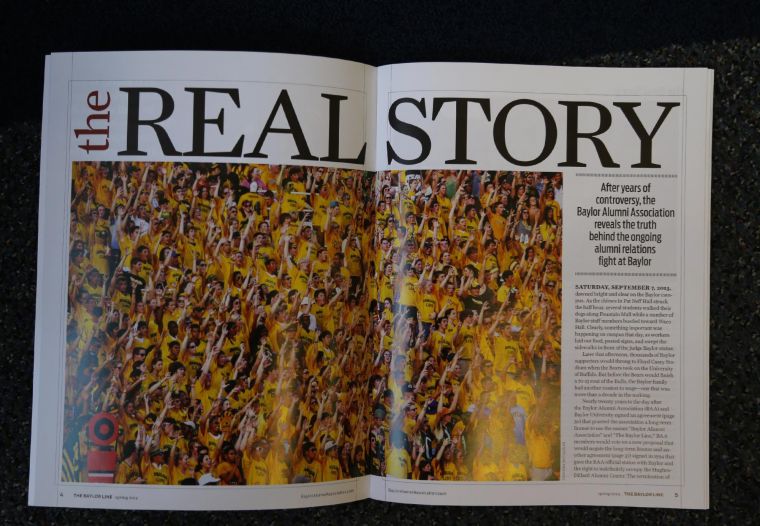 The Baylor Alumni Association’s new issue of its magazine is dedicated to chronicling the association’s version of the division between it and the university as it continues to rally member consensus for its future direction.

Themed “The Real Story,” the newest issue of “The Baylor Line” magazine retraces the group’s tumultuous relationship with Baylor, which culminated last year with a failed attempt to merge its operations with the university. The issue also reiterates BAA’s stance on the importance of maintaining an independent alumni association.

The magazine was emailed to members Wednesday, while print copies of the publication were mailed out beginning Thursday.

“One of the most asked questions from our members was, ‘How did we get to where we are? What has happened in the past that has brought us to this place?’ ” BAA President George Cowden III said. “We have an obligation with the members to be transparent with the decisions that we’re making and the reasons behind it, and we wanted to have members that are informed about the issues between the parties.”

BAA last printed “The Baylor Line” in September 2013 ahead of a vote on a transition agreement that would have dissolved the organization and consolidated alumni outreach under Baylor. That agreement also would have created a nonvoting alumni position on Baylor’s Board of Regents and cleared the way for creation of a new nonprofit entity to continue publishing the alumni magazine.

While 55 percent of the 1,499 members who voted in-person at Waco Hall were in favor of the agreement, that did not meet the two-thirds majority required for the measure to pass in accordance with BAA’s bylaws.

Baylor then announced its intentions to sever licensing agreements that allowed BAA to function, and all but one of the alumni association’s staff members resigned, most of whom took positions at the university.

The cover story of the latest issue points to disagreements with former Baylor President Robert Sloan, who took issue with stories in “The Line” he believed were unnecessarily critical of his leadership, as the beginning of the contentious relationship.

It further charges that wealthy alumni who supported Sloan and have since served on Baylor’s Board of Regents orchestrated efforts to force the group to dissolve its charter.

The cover story does not have a byline.

Baylor Spokeswoman Lori Fogleman said the university would not comment on the magazine’s publication or content, but she said BAA has not informed the university of its future plans since the vote.

“We remain profoundly disappointed (that) the time frame now spans two years and the association apparently has not made any progress at all deciding how in the future they might be helpful to the university and our students,” Fogleman said, referencing an initial period of negotiations between BAA leaders and members of the Board of Regents that lead to the proposal of the transition agreement.

“We’re in the midst of a period of historic success that’s being celebrated by Baylor Nation, and it affects every area of our university, so the inability and unwillingness of the association to fulfill its purpose to support Baylor University perplexes and saddens us.”

The magazine also includes a timeline of actions taken by Baylor to diminish BAA’s effectiveness, including:

Sloan’s decision to revoke BAA’s funding in 2002 after the organization said it would not merge with Baylor or give up its name to be used by Baylor’s newly created Office of Alumni Services, now named Office of Constituent Engagement;

Blocking BAA from using an on-campus call center to solicit memberships and donations in 2009;

Banning BAA from addressing new graduates at commencement or having an alumni tent outside of the graduation exercises;

Tearing down the Hughes-Dillard Alumni Center that served as BAA’s headquarters since 1978 last summer to create a grassy plaza for a pedestrian bridge across the Brazos River, connecting McLane Stadium to the main Baylor campus.

The university previously gave BAA until last December to cease using Baylor’s name and trademarks, including “The Baylor Line” title. Fogleman declined to say whether Baylor plans to take any action against BAA for continuing to use the trademarks, but added that the university is concerned about protecting the proper authorized use of its name.

The university in December locked the remaining BAA staff members out of offices the organization had been using in Baylor’s Clifton Robinson administrative tower, which forced the alumni group to rent office space off campus for the first time in its history.

Cowden said BAA disagrees that Baylor has the authority to impose such an order, based on the organization’s interpretation of licensing agreements it signed with Baylor in 1993 and 1994, which were a point of contention among members during the vote on the transition agreement.

Those documents also are reprinted in the magazine.

The future of both the alumni association and the magazine remains undecided. BAA is holding a board of directors meeting and annual membership gathering May 31 at the Waco Hilton Hotel to elect new officers and discuss general business.

An agenda has not been set, but Cowden said he expects the group will decide whether to resume printing “The Line” on a quarterly basis as it had been published in the past as well as options for the association’s future direction.

The group is considering at least three options to continue operating, including:

Keeping the name “Baylor Alumni Association” and picking up its traditional programming,

Changing the name but still functioning as an alumni outreach group,

Or changing its charter to become a foundation that would focus on raising money for scholarships.

Cowden said the group is still hopeful for a reconciliation with Baylor that will allow the group to support the university while maintaining its independence.

“We’re committed to having the members decide the direction of the alumni association,” Cowden said.

To read the latest issue of “The Baylor Line” click here: www.baylorline.com/spring2014

Tom Nesbitt, guest columnist: Baylor, BAA should make their final offers to patch up long-running dispute, and make them public

In his July 12 column in the Waco Trib, Baylor President Ken Starr joined the public discussion about the Baylor Alumni Association’s decision…

Struggling to maintain an independent voice and a relevant role in the Baylor family: Q&A with BAA President Tom Nesbitt

A discussion of BAA's long-running dispute with Baylor University.

Baylor University has rejected a settlement offer proposed by the Baylor Alumni Association to resolve a trademark infringement dispute, a mov…