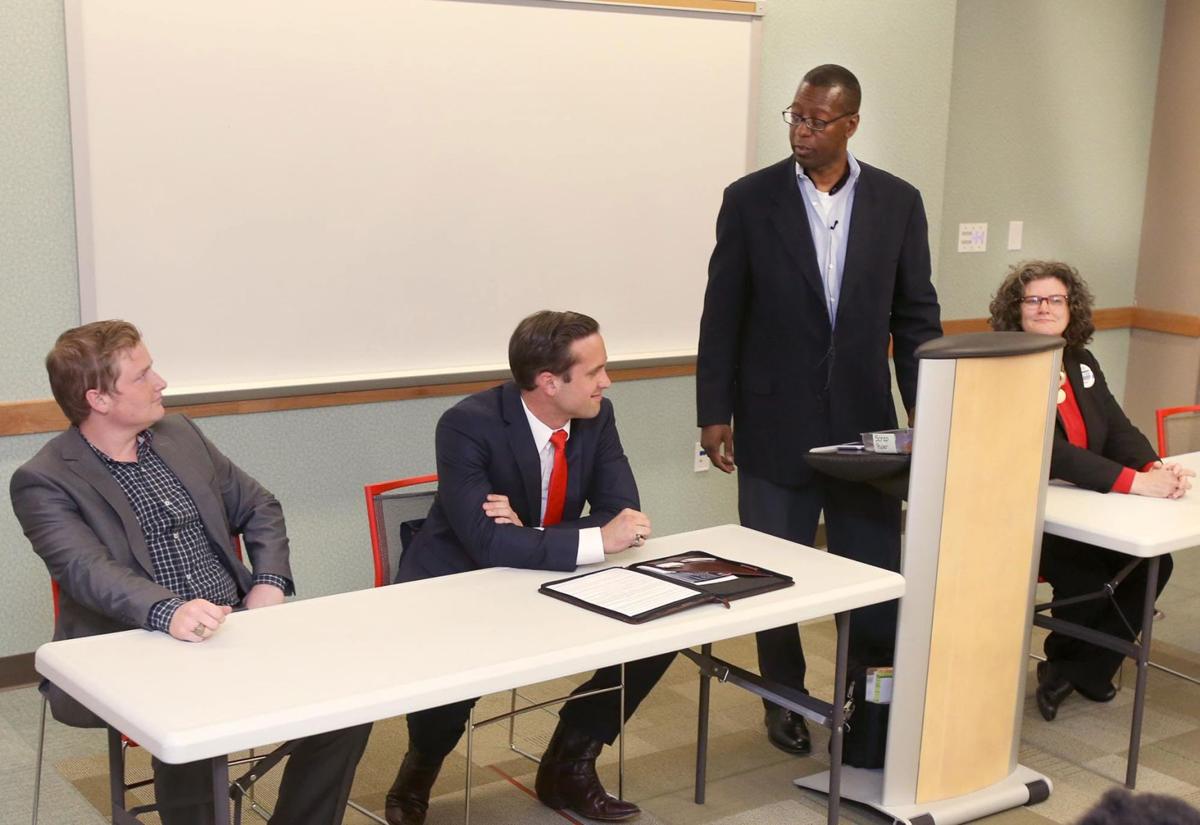 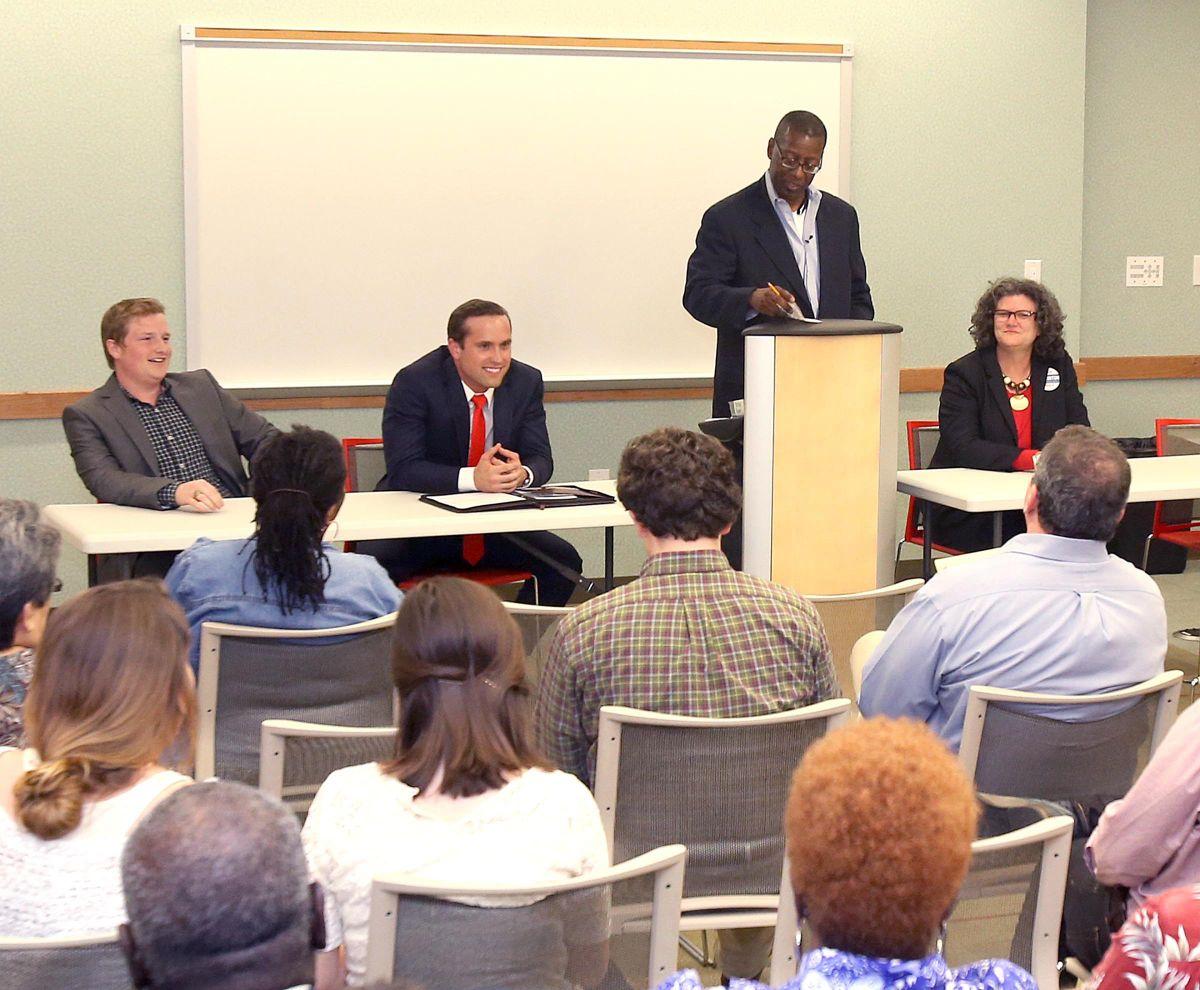 The first candidate forum for the May 9 Waco City Council election drew friendly debate Monday from the candidates and tough questions from the crowd.

About 40 people attended the forum at Waco’s Central Library, sponsored by the nonprofit Texas Voters Alliance, which is holding municipal election forums around the state this spring.

In opening remarks, the candidates established their credentials. Meek spoke of his work as an attorney and now part of a venture capital firm that has helped start several businesses employing 100 people in Waco.

“Having represented cities before, I have a foot in the door of how politics work, and I also understand job creation,” he said.

Thornton focused on her work in the private sector and higher education, and in her civic activism working as a facilitator in the discussions that created the Prosper Waco initiative and running the Act Locally Waco blog.

“It’s wonderful to have two good candidates,” she said of the District 4 race. “I have a huge amount of respect for my friend. I think the main difference is I’ve been working on these issues longer.”

Russell’s opponent, longtime District 2 incumbent Alice Rodriguez, did not attend because she was out of town. Russell did not mention her but focused on his own background in starting a furniture business and selling property for Magnolia Realty.

“For me, it comes down to keeping an eye on economic development,” he said. “I sell Waco on a daily basis to people out of state and out of town, and I hear their outside view, people from Connecticut and Las Vegas with ideas of what Waco could be.”

The candidates responded to written, unsigned questions about a range of issues, including “predatory lending,” or high-interest consumer payday lending.

Meek said he thought the city should craft ordinances restricting the terms of payday loans in proportion to the amount a borrower makes.

He said he has studied that approach from other cities and thinks it would withstand a legal challenge.

Thornton said she also would support a well-thought-out ordinance restricting payday loans, but she is more interested in community discussions on creating lower-interest alternatives to payday loans.

The candidates had roughly similar responses when asked about their position on a “smoking ban.”

The Waco council this year will consider a model ordinance from the Waco-McLennan County Public Health District for a “smoke-free” ordinance barring smoking from workplaces, including restaurants and bars.

All three candidates supported tougher rules against smoking in public.

“I value the opinion of the public health district, and it makes sense to restrict” smoking, Meek said.

Russell said he is cautious about restricting activity on private property, but as one who is allergic to cigarette smoke, he sided with Meek and Thornton on stricter restrictions.

A question about how the city of Waco could protect the rights of lesbian, gay, bisexual and transgender citizens caused some of the candidates to speak cautiously.

“I don’t know of a more hot-button issue,” Russell said. “I’m a Christian, and my No. 1 calling is to love everybody and reach out to everybody. . . . My approach is to ask what is the most loving thing that allows us to serve and embrace everyone and to allow dialogue.”

“It is a contentious issue, but I would be lying if I didn’t say I think gay rights are civil rights. . . . Sometimes our intentions in that direction have to be reinforced by rules,” she said. “I feel like while there are different types of religious beliefs, in a civic conversation, a person’s sexual orientation doesn’t take money out of my pocket or break my leg, so their rights need to be protected.”

“Like Jake and Ashley, I’m a Christian and love the Lord, and my objective in doing this is to see God and hear him out in his wisdom. . . . I do believe loving your neighbor is the best approach to any situation,” Meek said.

Thornton and Meek agreed that whoever won the District 4 race would have the support of the other candidate, even though Thornton has teased her opponent as being her “nemesis.”

Victor Dunn, the organizer of the event, said he wished every forum could be as civil as Monday’s, and his group will be back for next year’s campaign season.

“This was a model forum,” he said.

Dillon Meek, 29, general counsel for Rydell Holdings, a local investment firm, and previously an attorney at the Haley & Olson law firm, i…