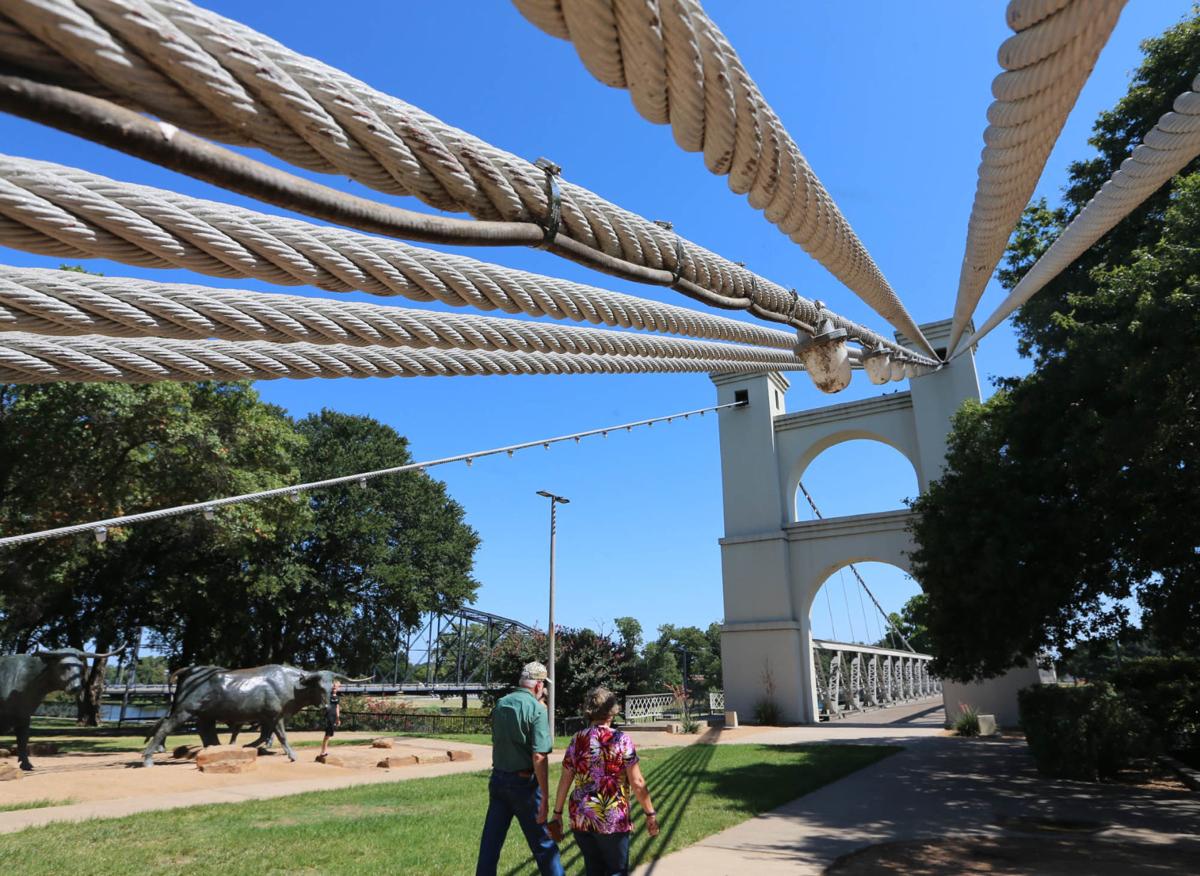 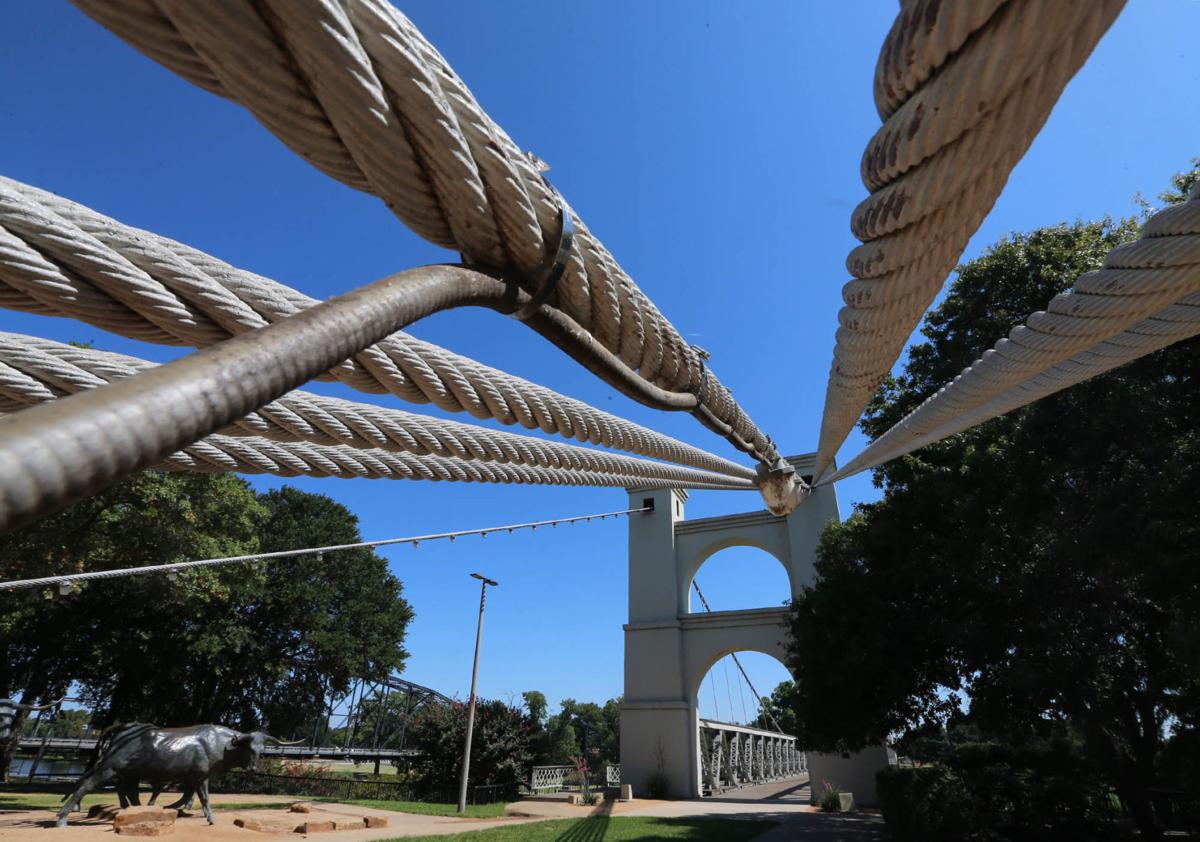 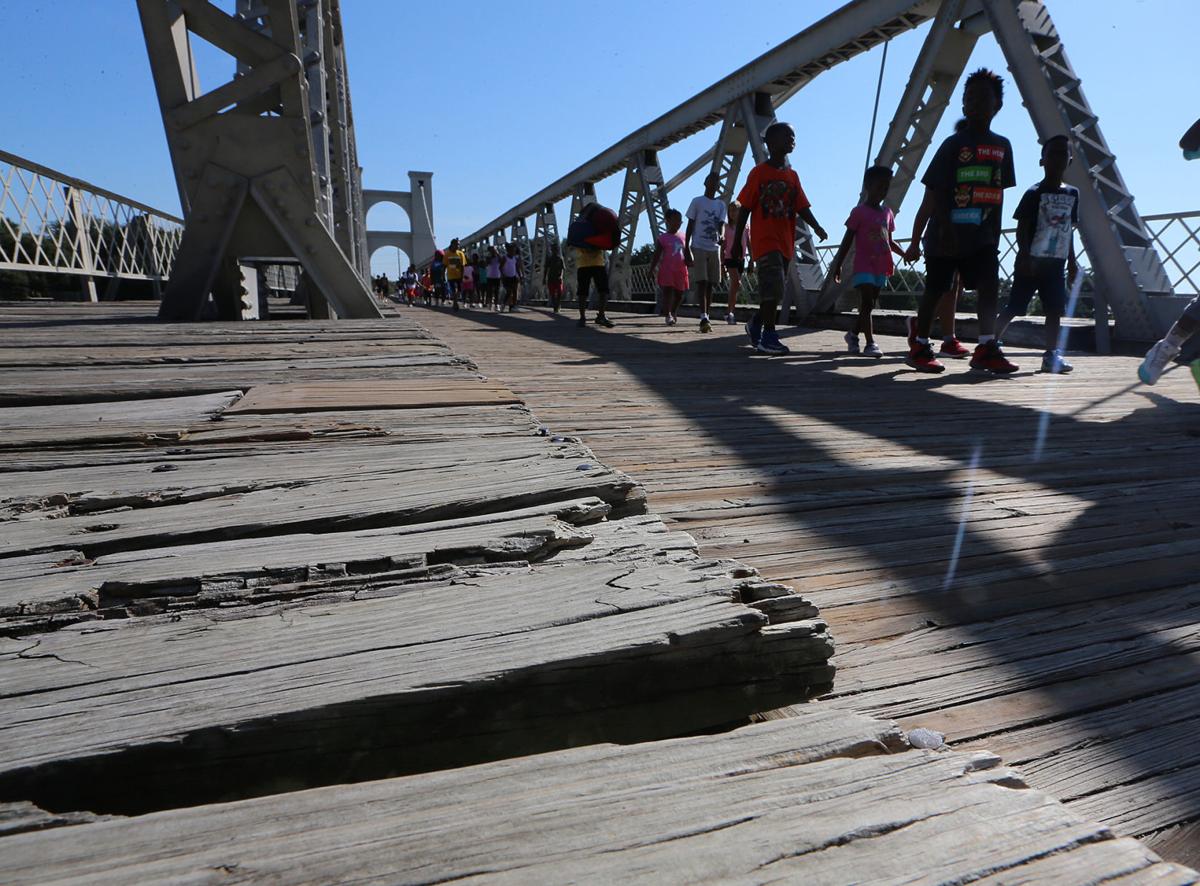 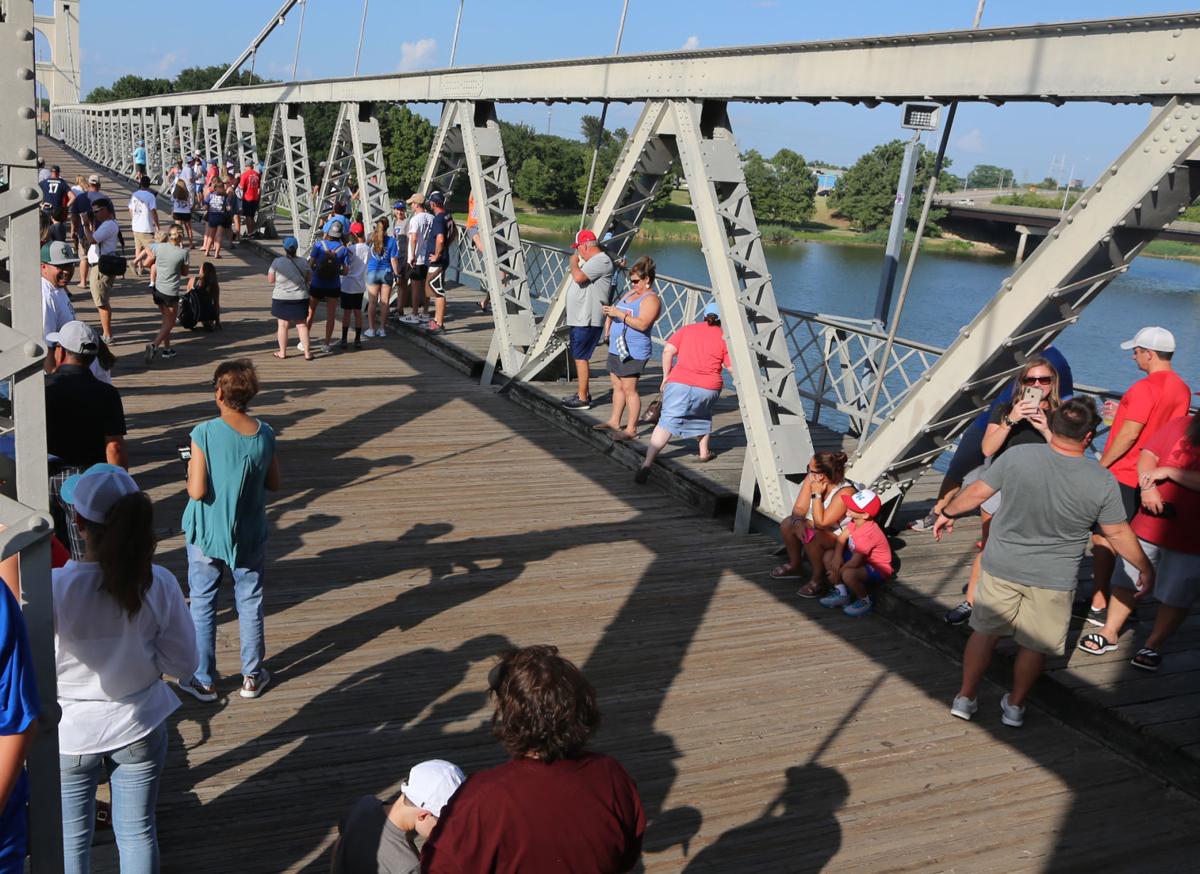 Supporters line up on the Waco Suspension Bridge before a parade July 31 for the Southwest Region Little League tournament. 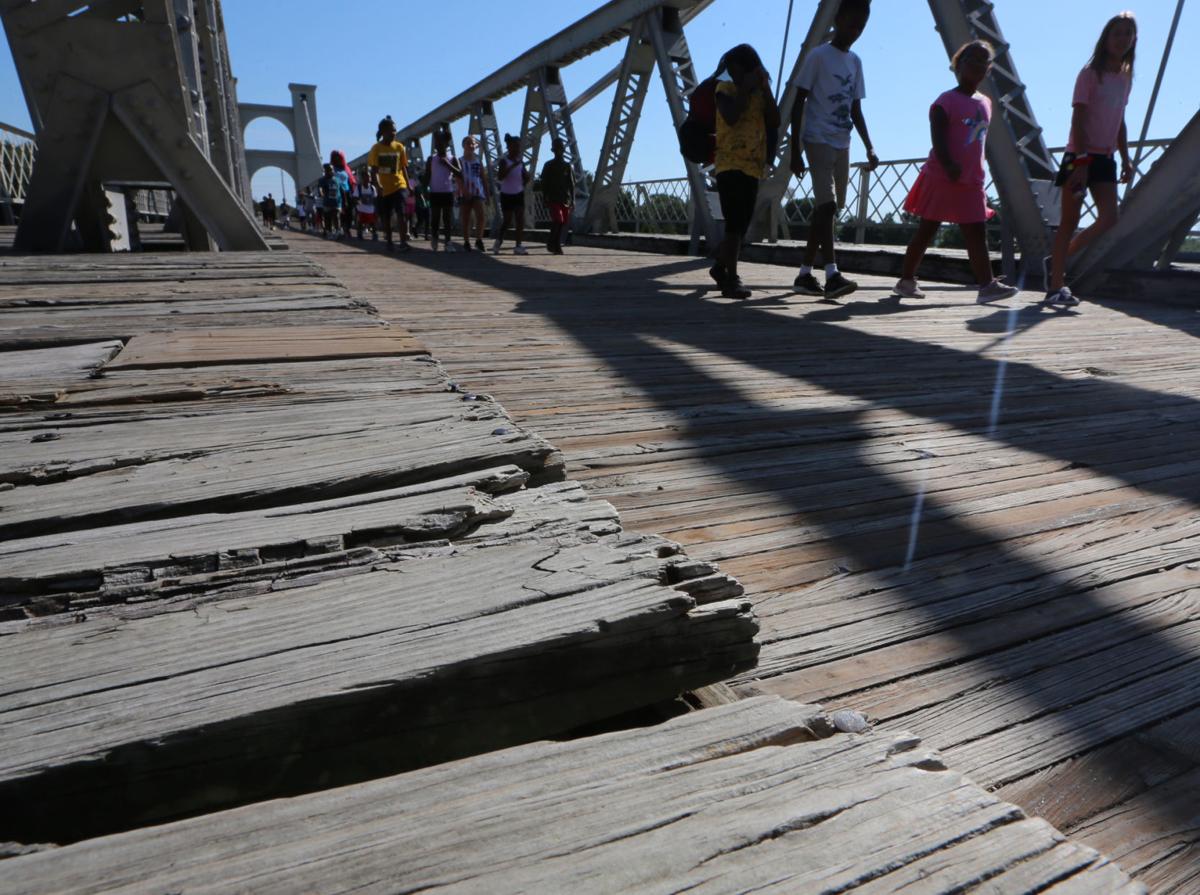 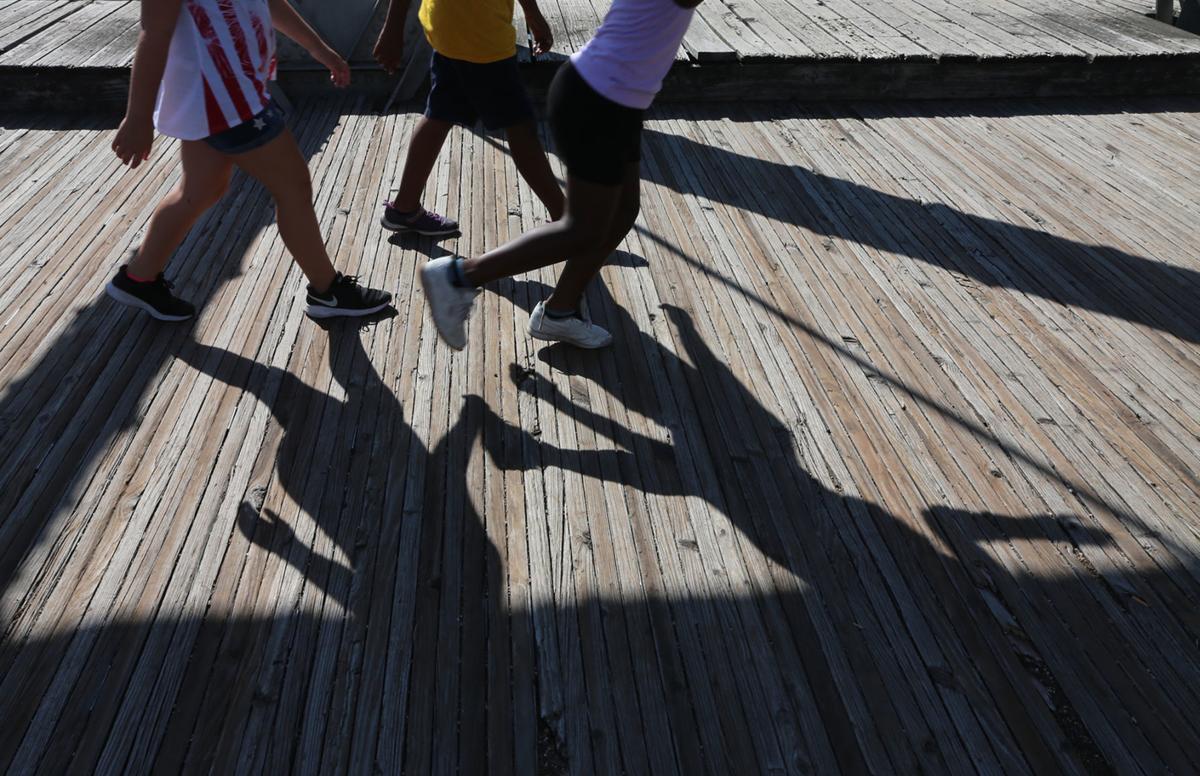 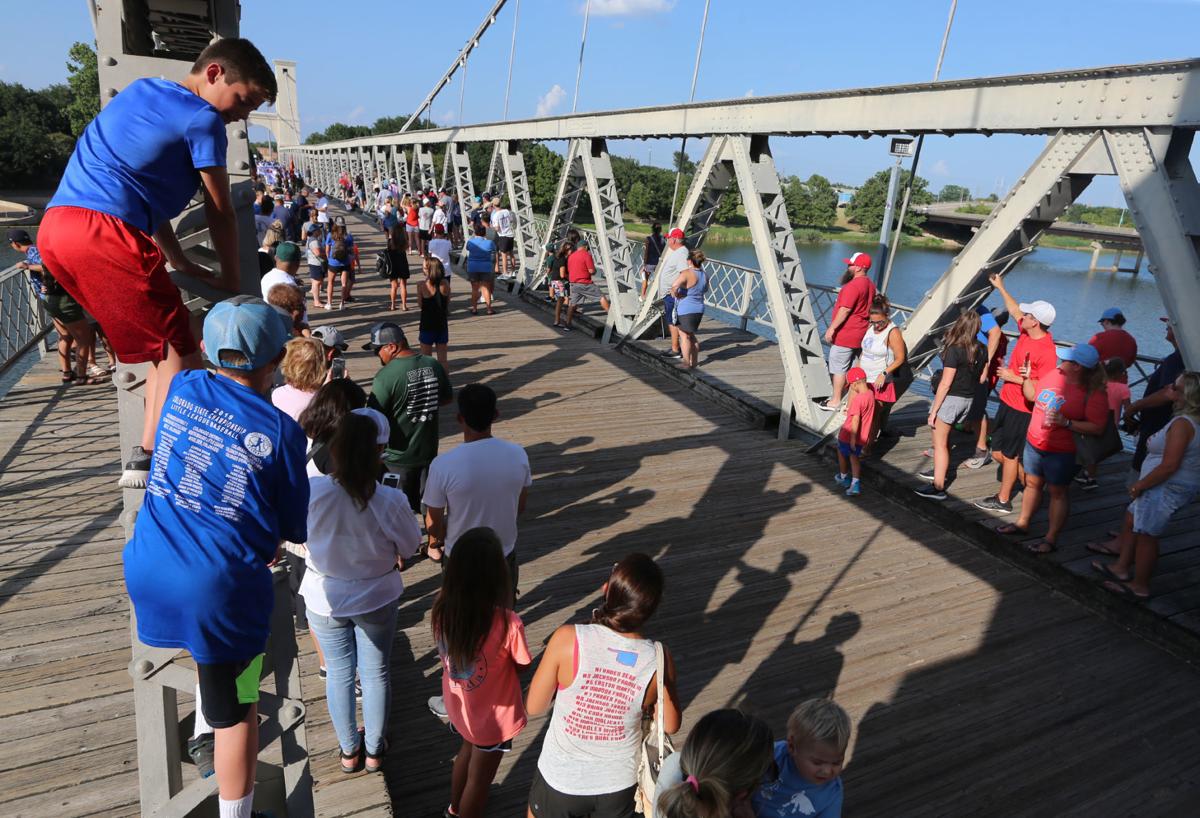 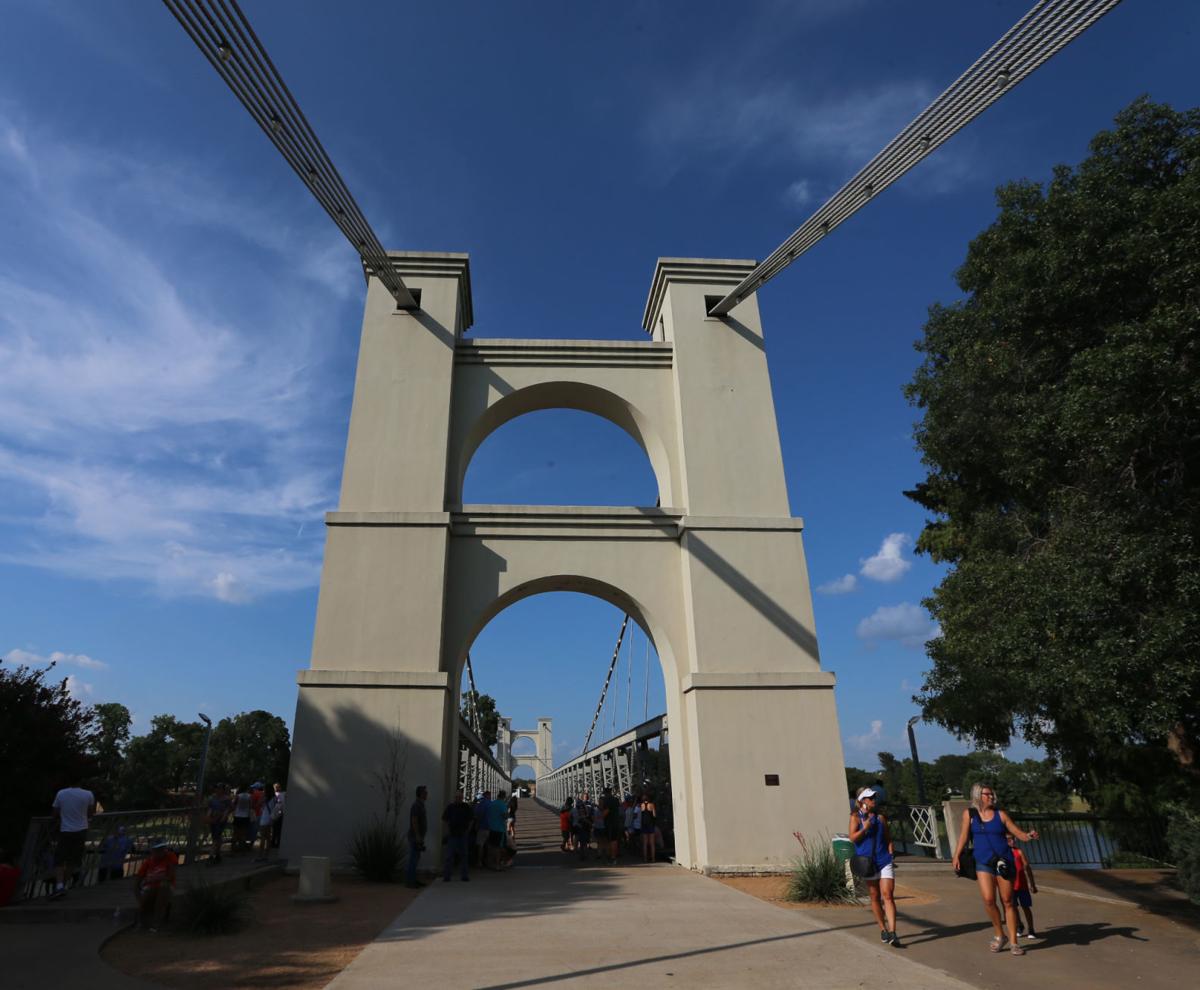 The Waco Suspension Bridge is a registered historic landmark, a local gathering place, a wedding venue and a finish line, and at the end of the month, a major overhaul of the span will go out to bid.

All of the above will be on hold after November, when work on the bridge rehabilitation project is slated to start. An engineer performed a structural analysis in 2017 that revealed corrosion and moisture issues worsened by wood and steel cables that are losing their elasticity.

The overhaul will include replacing the bridge’s deck and cables, strengthening its anchors on both banks and repairs to its anchor houses.

Elements like the design of the railing need to be up to modern-day standards without violating the Texas Historical Commission’s standards on modifying designated structures.

“It’s character versus materials. What’s the balance there?” Balk said. “There’s been some conversation there about that in the design side.”

When the Tax Increment Financing Zone board signed off on $5.5 million in bond funding for the project in late 2017, he said he expected work to start as soon as early this year. By last year, he knew it would take longer to get the historical details of the renovation settled, he said this week.

“We go through a descending order of what the critical design needs are, dealing with the structural aspects first and then kind of working our way to more of the aesthetic and architectural features, which are also extremely important on a project of this nature,” Balk said.

Interim Parks Director Jonathan Cook said 30 to 40 events make use of the bridge each year, including the Brazos Nights concert series, the Silo District marathon and the Ironman 70.3 Waco triathlon, which will take place in October, before construction starts in November.

“That’s going to be our drop-dead last event,” Cook said. “We’re going to accommodate it this year.”

Some events will be diverted, possibly to Cameron Park or, in the case of the triathlons, crossing the Washington Avenue Bridge. Indian Spring Park on the west end of the bridge and Martin Luther King Jr. Park on the east end are expected to remain open during the work.

“We’re not going to close the park area,” Cook said. “We feel it’s a scenario we’re going to be able to balance.”

The bridge will mostly remain closed after this year’s Ironman, Balk said. The project will also affect boat traffic during certain phases. He said while he estimates the work will take about two years, that timeline could change. The river level rising could hurt progress during some phases of work, he said.

Crews will build piles under the bridge to temporarily support it as they remove and replace its steel cables, which show signs of aging after a century of expanding in the heat and contracting in the cold. Balk said a structural engineer who inspected the cables found they would last another 10 years before they could deteriorate enough to warrant closing the bridge to the public. While the bridge opened in 1870, its cables were replaced in 1914, when other repairs and upgrades were also made.

“A little bit of stretch is part of the design, but over time they lose the elasticity,” Balk said. “Large crowds on the bridge could be a problem at that point.”

Next, the wooden decking will be removed and replaced, likely with a fiberglass pan and concrete boards stamped to resemble wood. The walkways along each side of the bridge would be replaced with a tropical hardwood.

Balk said the original dense hardwood deck came from slow-growth trees that are more difficult to come by in 2019, and the material was treated with creosote, which is likely carcinogenic and no longer considered safe.

“We get calls,” Cook said, referring to the deck’s deteriorated state. “During events, we’ll have boards that pop up. It’s something that we pay attention to, but we are seeing more seepage come through.”

Moisture in the wood has corroded the long steel beams, called cords, over time. Balk said the corrosion is currently manageable, and the cords can be repaired once the wood is removed. He said less absorbent decking would prevent it from happening again.

“The cost of the project would go up exponentially if those had to be replaced,” Balk said.

On both banks, the bridge’s cables run into toll houses and down 15 feet into the ground. The new cables will be secured with concrete anchors about 5 feet across and drilled into bedrock.

Balk said smaller improvements will include drainage work, repairs to the retaining walls and the brick and plaster on the cable houses, which have have degraded over time because of moisture.

Touches like patterned concrete that mimics wood can help preserve a structure’s historic merit, said Elise King, design historian for Waco’s Historic Landmark Preservation Commission. King said she has not seen the final design for the Suspension Bridge, however.

“It can be a very tricky, nuanced approach, but that’s the recommendation so that there isn’t any confusion between what’s old and what’s new,” King said. “But from a design perspective, it can be a really invigorating challenge.”

The commission’s standards stipulate that any additions or alterations should be clearly different from the old components, yet still harmonize with the original.

“It’s more than a historic monument, it’s really this active public space,” King said of the bridge. “It’s so interesting that we have this great asset in the city already that facilitates that kind of engagement.”

The commission will vote on whether to approve the design.

“It’s much more for the city and the people that live in it, and that’s fascinating for me,” King said. “It’s an identity-giving element for Waco. It’s great that it’s so much more than just this entity.”

Sparks Engineering President Patrick Sparks said suspension bridges are nothing unique, but the Waco Suspension Bridge’s history, and its renovation in 1914, make its rehabilitation an interesting case.

Testing revealed the anchor on the downtown side of the bridge was reinforced with concrete in 1914 to increase the bridge’s capacity, but for whatever reason the work wasn’t mirrored on the other bank.

“There were a lot of modifications done,” Sparks said. “Part of our work is diagnosing changes that occurred over time so we actually understand what’s going on.”

The east side is anchored underground in a similar fashion, but the anchor houses are longer than their counterparts on the opposite bank. Sparks said he believes they were expanded in 1914 as part of renovations, but he was not able to find evidence of it.

“What we believe is that they were expanded horizontally. We’re not entirely sure why they did that,” Sparks said. “They’re also farther from the river. They don’t have as big a risk as the smaller anchor houses on the other side.”

Sparks said the bridge’s towers have taken little damage over time, but the anchor houses were built with brick containing a fair amount of sand, and have degraded. The design includes plans for selective replacement of bricks, repointing and repairs to the plaster inside the anchor houses to help protect the structures from moisture.