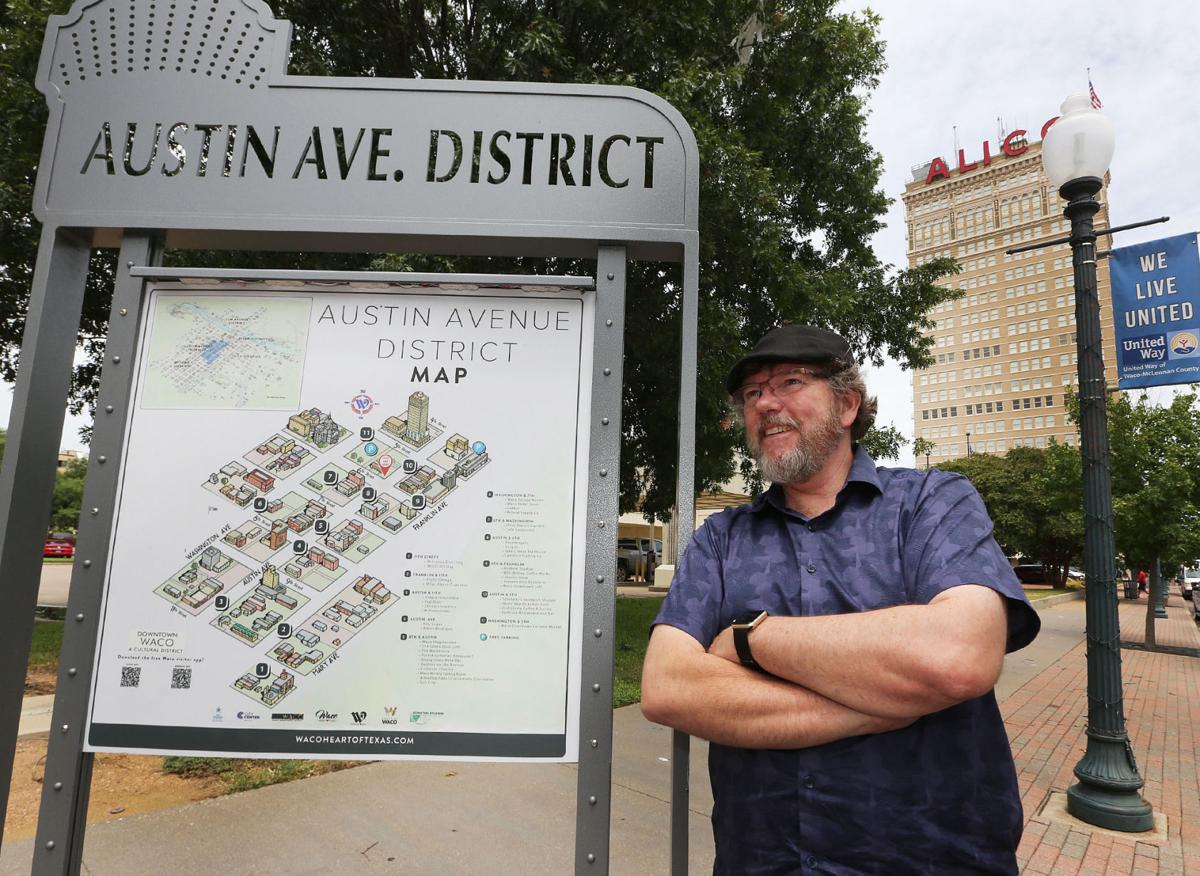 Bryant Stanton of Waco’s Stanton Studios drew up the kiosk plans, which has maps mounted in an aluminum frame bolted to the sidewalk, and illuminated by LED lights powered by a solar panel mounted behind the map. 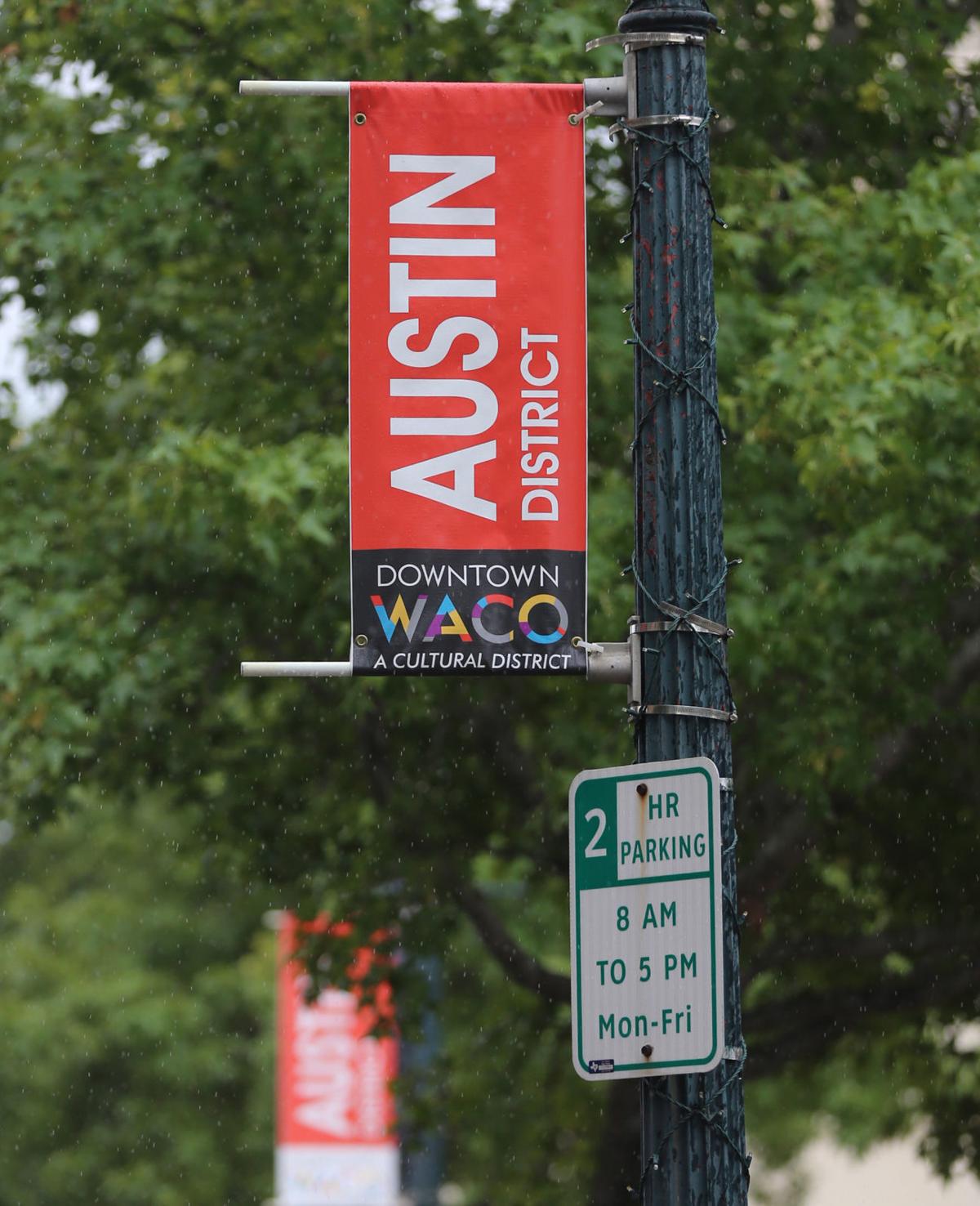 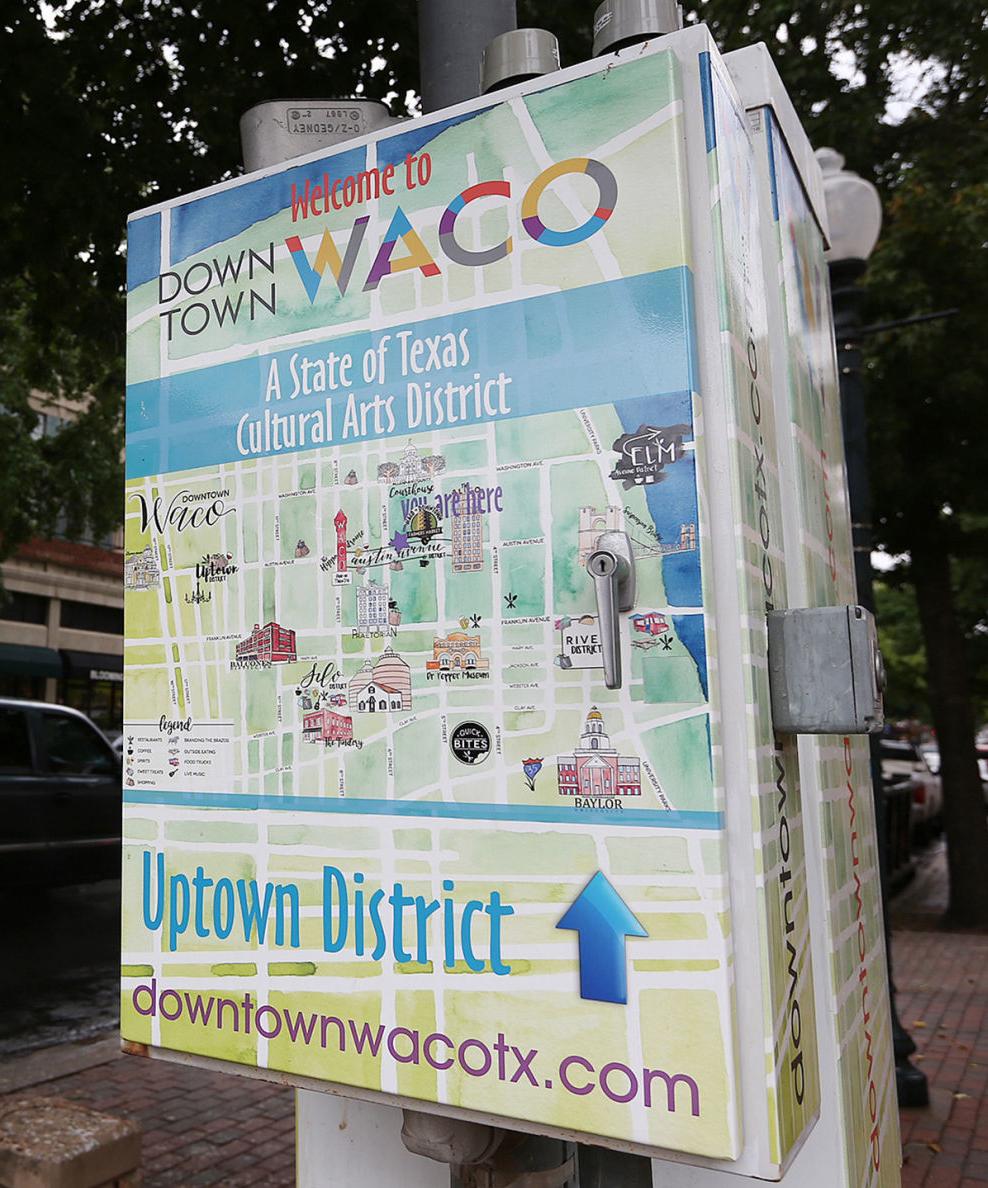 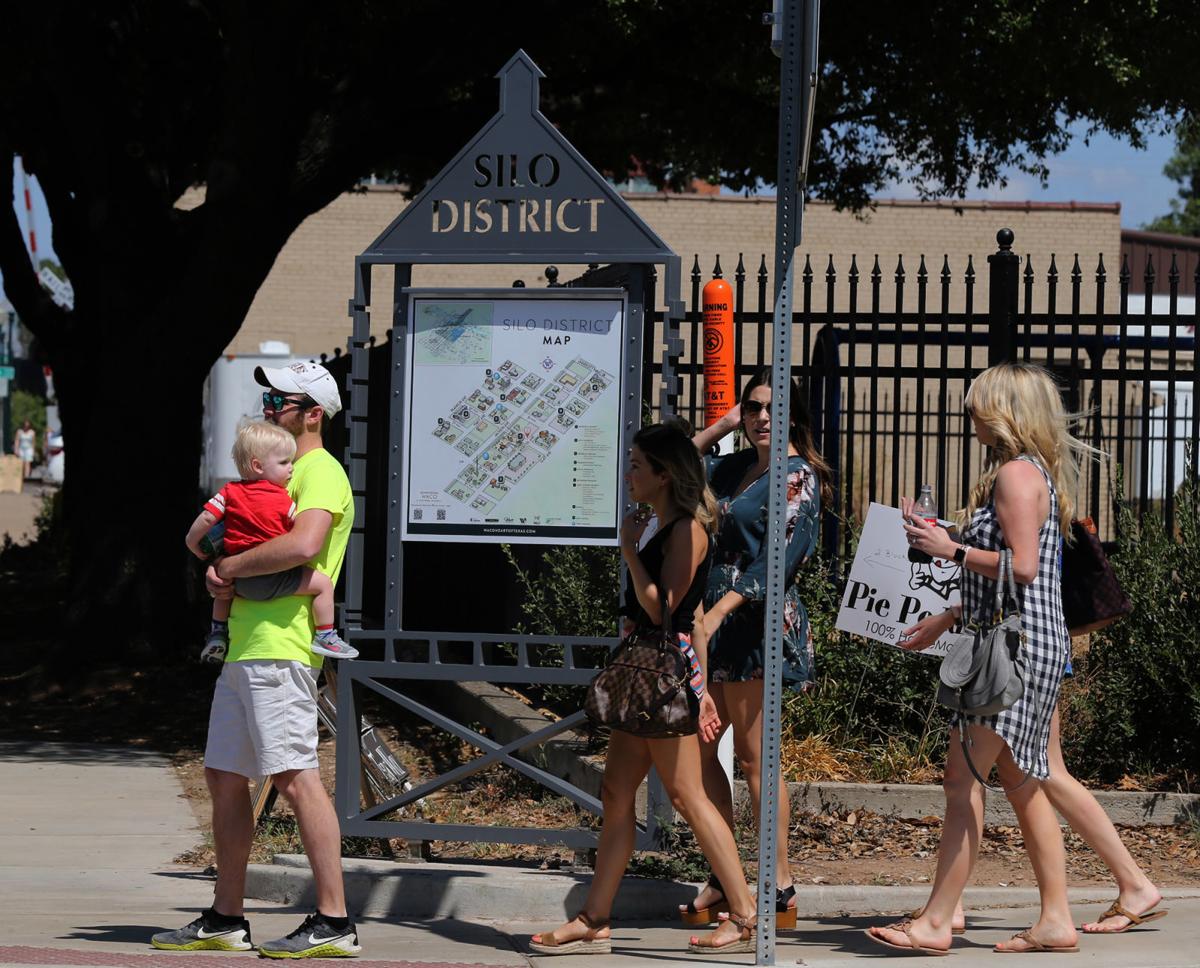 A group walks past one of the eight map kiosks that have gone up around downtown declaring five districts. More kiosks and other tourist-oriented district markers are planned. 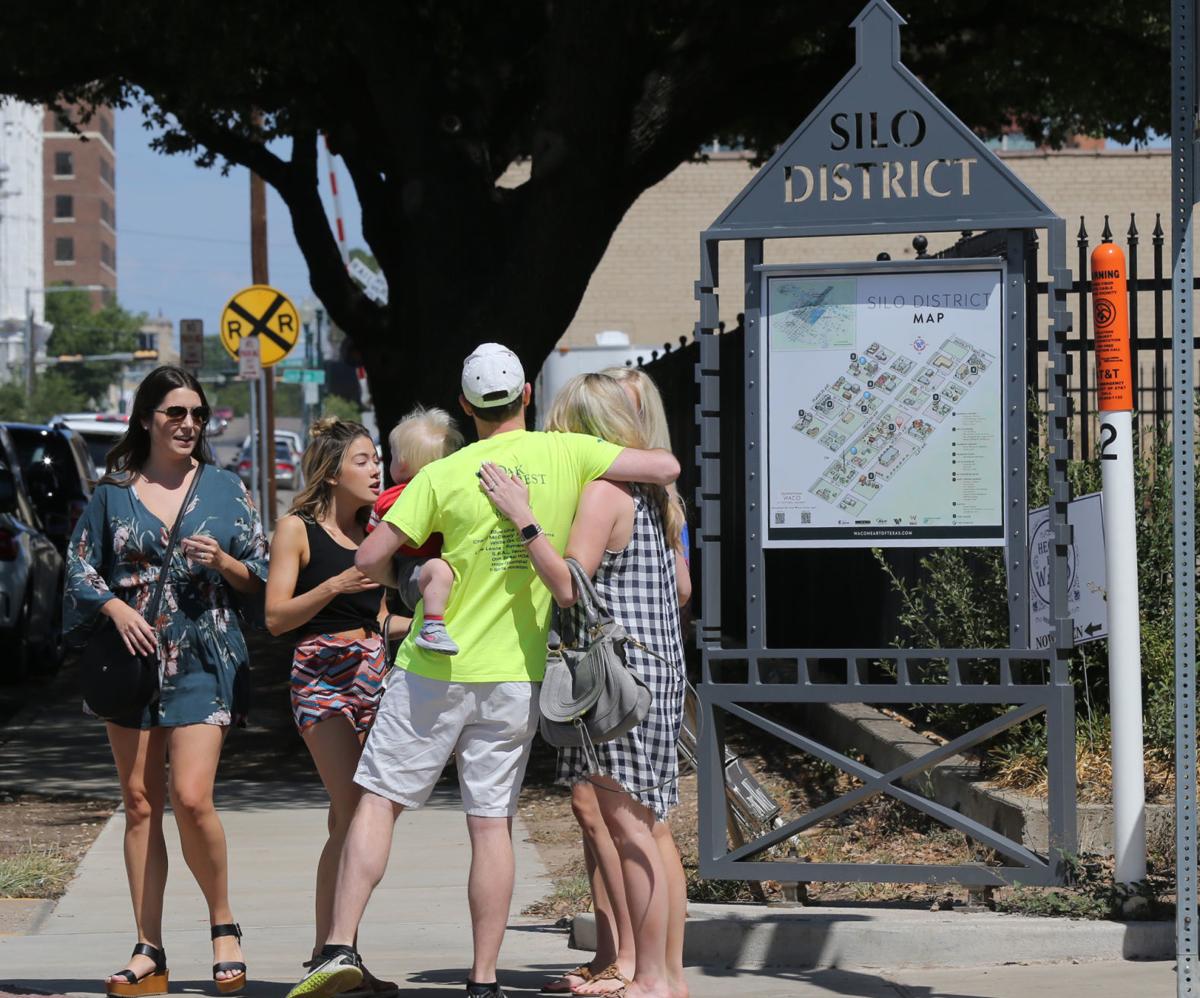 A group gathers near a map kiosk declaring the Silo District. 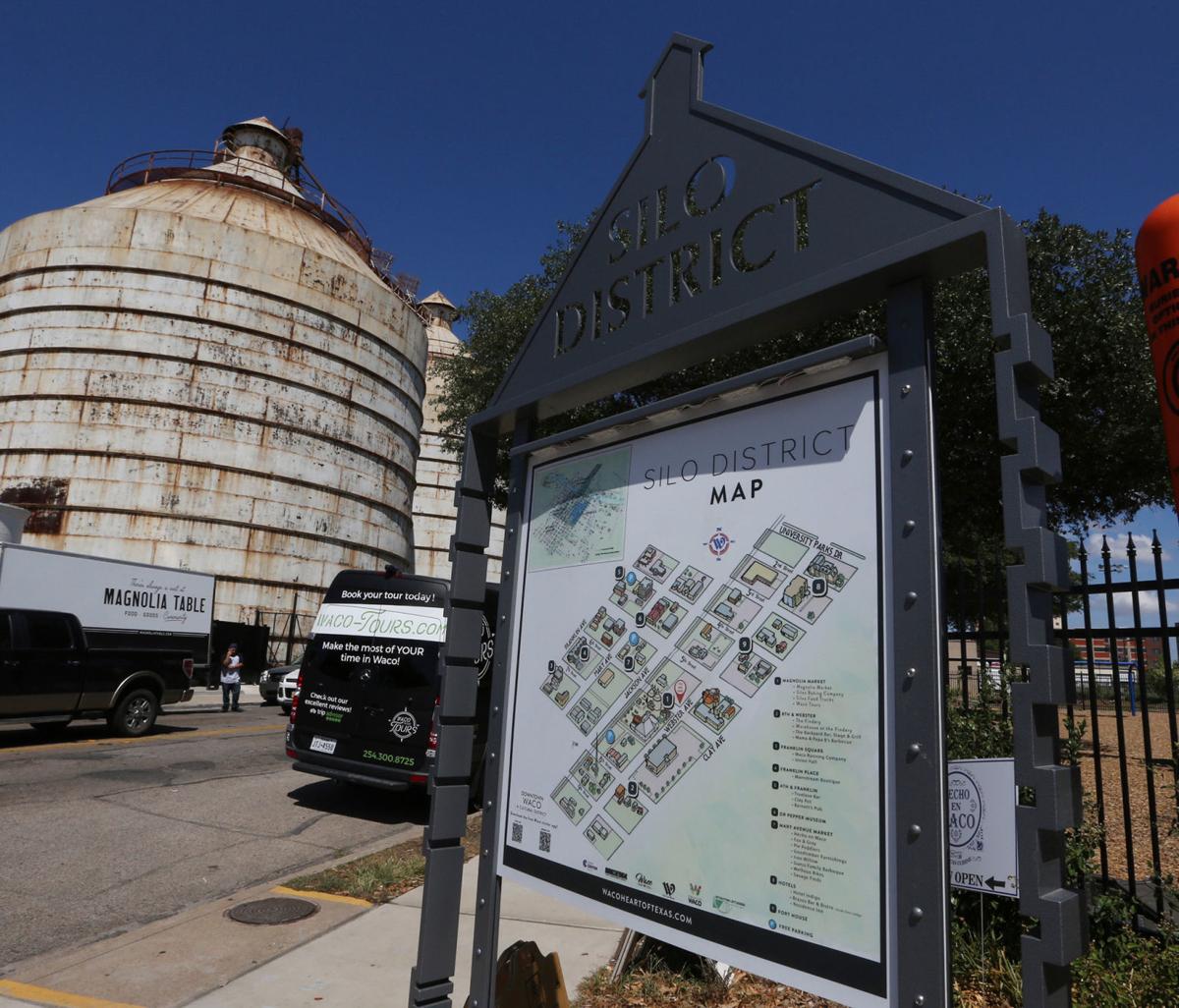 Kiosks declaring the Silo District are topped by a silo-like silhouette. 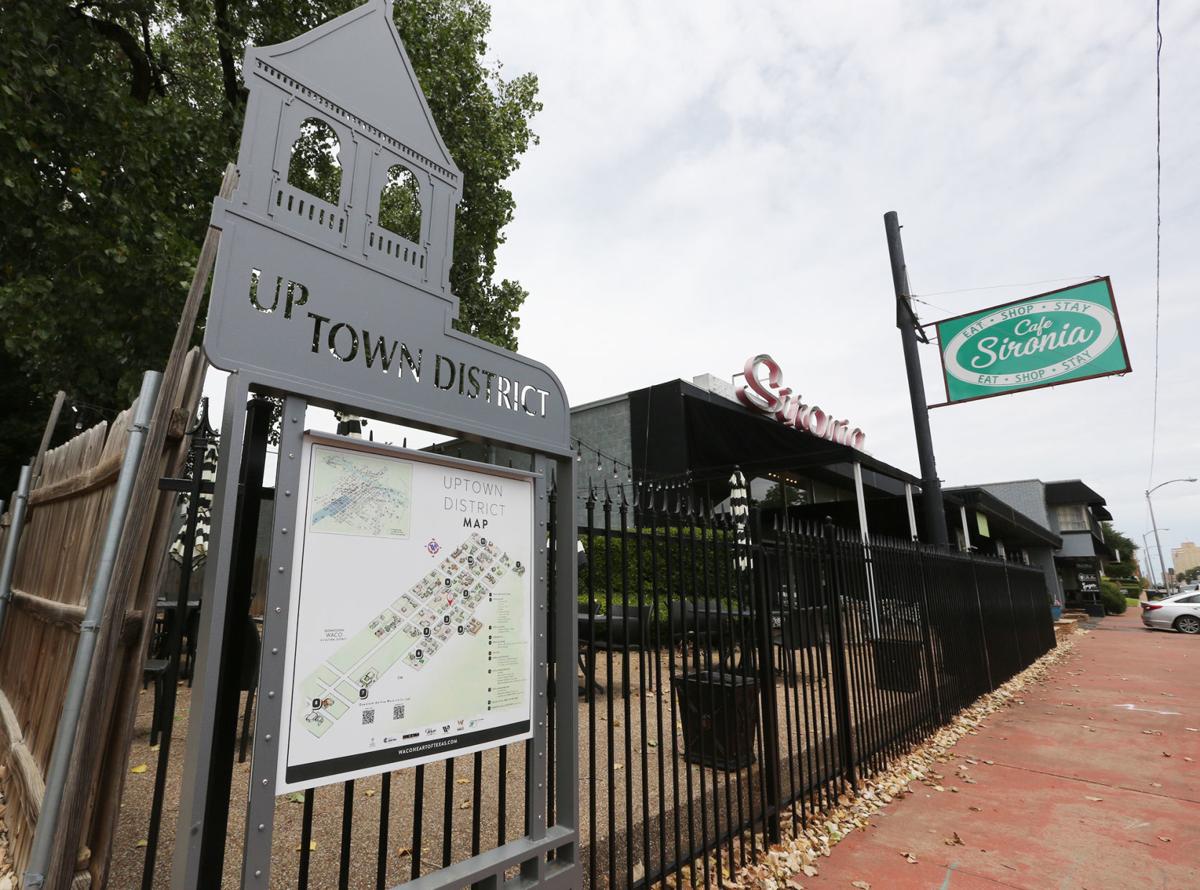 One kiosk so far has been installed for the Uptown District. It is topped by an image of a cupola representing the Cooper Foundation headquarters nearby. 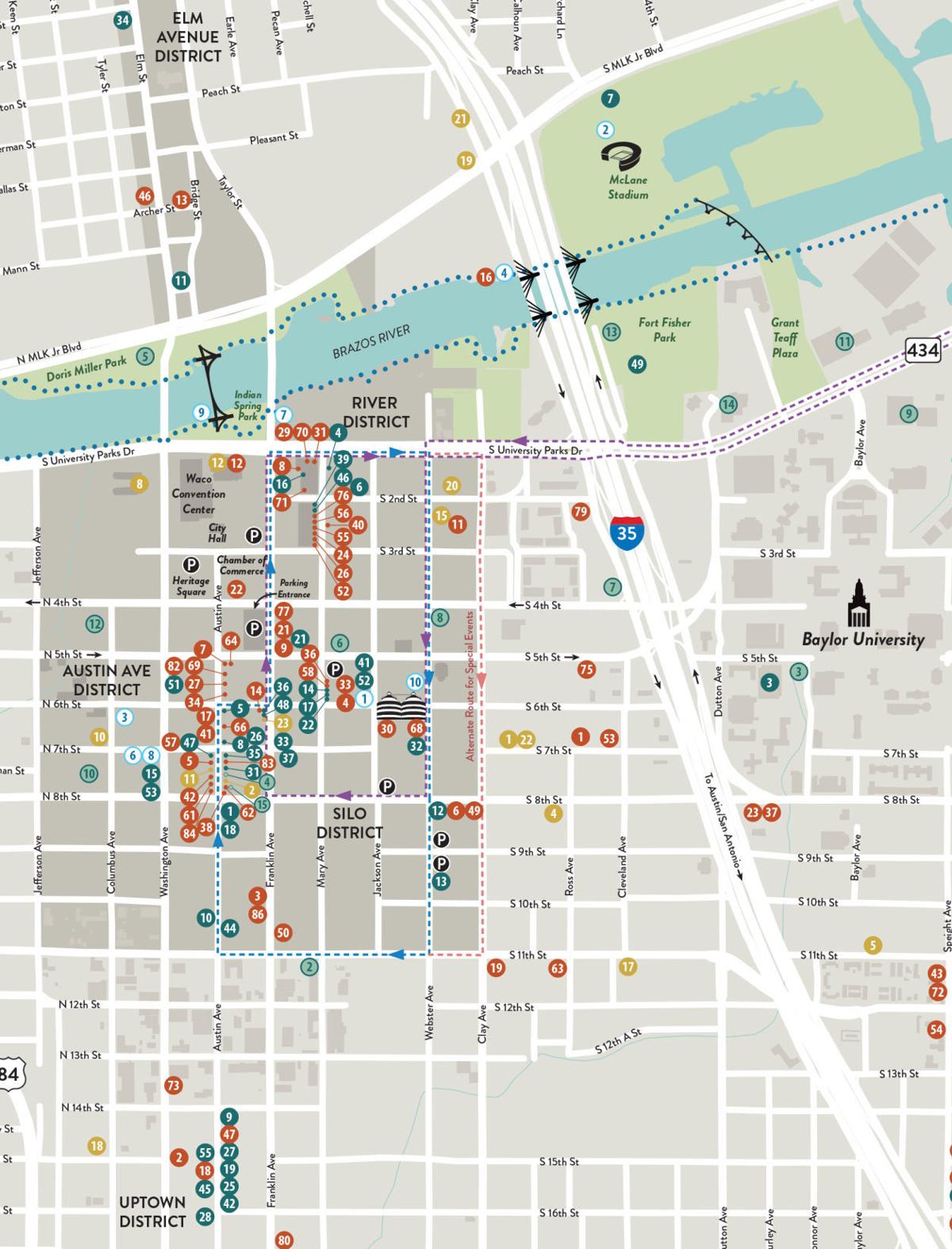 A map of Waco by the city tourism bureau shows the loose boundaries of the districts.

Bryant Stanton of Waco’s Stanton Studios drew up the kiosk plans, which has maps mounted in an aluminum frame bolted to the sidewalk, and illuminated by LED lights powered by a solar panel mounted behind the map.

A group walks past one of the eight map kiosks that have gone up around downtown declaring five districts. More kiosks and other tourist-oriented district markers are planned.

Art in the form of graphic and architectural design plus a splash of color is informing thousands of Waco tourists where they are in downtown and how to get where they want to go.

That artistic touch appears in commissioned map kiosks, utility box wrap-arounds and vertical banners hung on downtown lampposts, with more planned in the months ahead in the form of tinted lighting.

The eight kiosks, whose installation started in late spring, help orient out-of-town visitors to different downtown areas, but many longtime residents are learning something, too: Whoever put up the signs is convinced downtown now has districts.

Not to worry, said Carla Pendergraft, marketing director for the Convention and Visitors Bureau. The downtown districts are meant to make it easier for tourists to frame information about downtown.

“It’s hard for Wacoans to grasp, to really absorb, but this is not aimed at Wacoans,” Pendergraft said. “It’s aimed at the visitors wandering around downtown lost.”

The public maps, district designations and banners come as part of a combined effort by several city groups to market and develop downtown Waco, including City Center Waco, the Greater Waco Chamber of Commerce, the Waco Convention and Visitors Bureau, Creative Waco and the Texas Brazos Trail.

Waco’s recent explosion as a tourist destination, thanks in large part to the development of Magnolia Market at the Silos by “Fixer Upper” television stars and Waco-area residents Chip and Joanna Gaines, created a need for directional information, officials said.

While many were able to navigate to the Silos, going beyond that was a little trickier.

“Waco for its size has a fairly large downtown,” said Jeffrey Vitarius, director of finance and operations for City Center Waco, a city-initiated nonprofit that handles city planning in the downtown area.

An ad hoc solution came in a watercolor map with downtown points of interest, painted by Waco artist Shelby Pipken, and adapted as a cover for several utility boxes downtown. Those were supplanted by a $52,000 map kiosk project funded in part through $24,120 from the Waco Convention and Visitors Bureau, $23,500 from Center City Waco and $2,000 in artists’ design fees from the Texas Commission on the Arts through Creative Waco.

Bryant Stanton of Waco’s Stanton Studios drew up the kiosk plans, which has maps mounted in an aluminum frame bolted to the sidewalk, illuminated by LED lights powered by a solar panel mounted behind the map.

Each kiosk incorporates a symbol representing the district it shows: a silo for the Silo District, the Waco Hippodrome’s WACO sign for the Austin Avenue District, cable towers of the Waco Suspension Bridge for the River District, an elm tree for the Elm Avenue District and a cupola from the Cooper Foundation headquarters for the Uptown District.

Enclosed in each is a 3-D perspective map drawn by John Roman, an illustrator from Scituate, Massachusetts, whose clients have included the National Park Service, Marriott Hotels and Baylor University.

The maps shows the city blocks in each area, with restaurants, shops and other points of interest marked and indexed. A smaller inset map shows each area in relation to the rest of downtown.

Stanton said the kiosks’ purpose and location shaped their design: aluminum composition so they will collapse if hit by a car or truck but be strong and durable to withstand high wind and vandalism, and location on public property but oriented not to block drivers’ vision.

Though many know Stanton Design Studios for its work in stained glass, metal work and woodwork also fall within its design umbrella, and Stanton handed off his kiosk designs for frequent collaborator John Nickell’s Nickell Metalsmiths to execute.

George Johns, Nickell’s production manager, said the kiosk framing was relatively straight-forward work but the major difference in the project it that it is in public view.

“It’s a rewarding project,” Nickell said. “A lot of our work you don’t get to see on a daily basis.”

The Stanton-designed kiosks join the eye-catching “714 Green Door” at 714 Austin Ave. as downtown examples of the Stanton studio’s work. Bryant Stanton’s “Bats Taking Flight” sculpture is also set to be part of the Sculpture Zoo planned along the Brazos River.

Each downtown district has two kiosks installed except for Uptown and Elm Avenue, which have one each. Their second kiosks will come in early fall, and there’s a possibility more kiosks will be added, Pendergraft said.

Dovetailing with the district map kiosks are colored lamppost banners in red for Austin Avenue, purple for Elm Avenue, blue for River and black for Silos. Green banners for Uptown have not gone up yet.

The 37 banners, paid for by City Center Waco, are meant to help visually connect each area and persuade a pedestrian or driver that there’s more ahead to see, Vitarius said.

“There’s lots of space in downtown, and development is concentrated in pockets,” he said.

A touch of color seen a block or two ahead may lure a curious visitor farther into a district or on to an adjoining one.

Over time, officials hope the color-coded banners may strengthen a district’s identity as businesses use that with their customers or in their marketing, Vitarius said.

That chromatic branding may be amplified in the months ahead with plans to tint some of the light from the banner-carrying lampposts with the district color.

Pendergraft said the artistic touch found in the downtown signage also adds a Waco message for out-of-towners that goes beyond the directional or informational.

“I think it’s so friendly,” she said. “It makes you feel welcome.”

'Lightning in a bottle': Local impact of Magnolia could long outlive 'Fixer Upper'

On a Thursday afternoon at Magnolia Market at the Silos, tourists line up for $3.50 “shiplap…