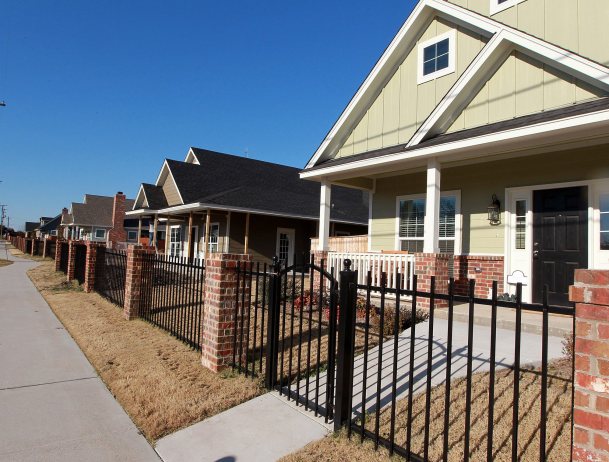 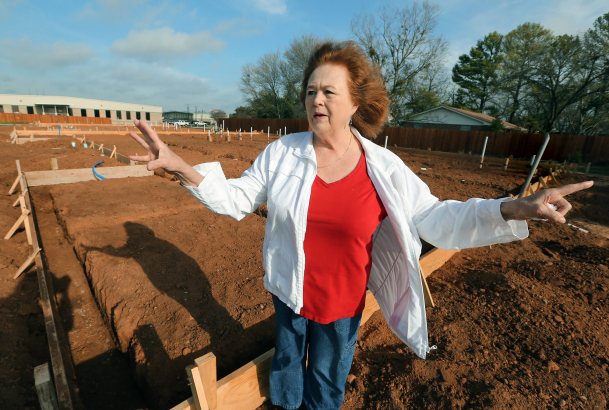 ABOVE: Marty Bush, who is developing the Waterford Village project with her husband, envisions an “old-timey” neighborhood with small lots and common spaces. BELOW: The Magnolia Villas subdivison off Bosque Boulevard and 46th Street offers closely packed homes with lawns maintained by a homeowners association. 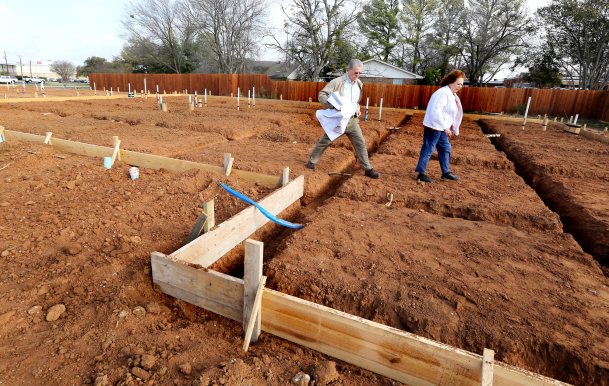 Marty and Jim Bush walk through the foundation sites of their Waterford Village subdivision, which is aimed at homebuyers who don’t need a house for a large family. 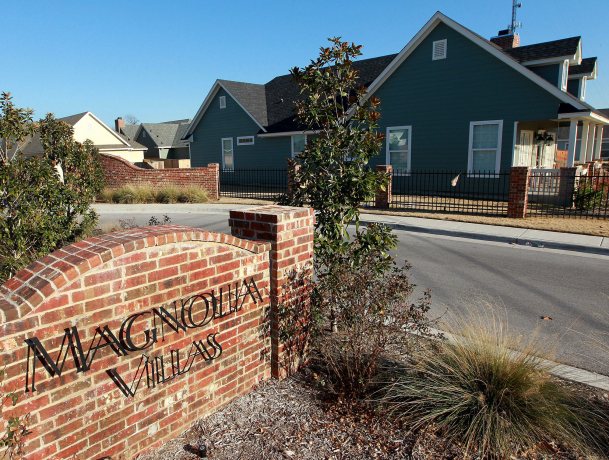 The entrance to Magnolia Villas off Bosque Boulevard and 46th Street. 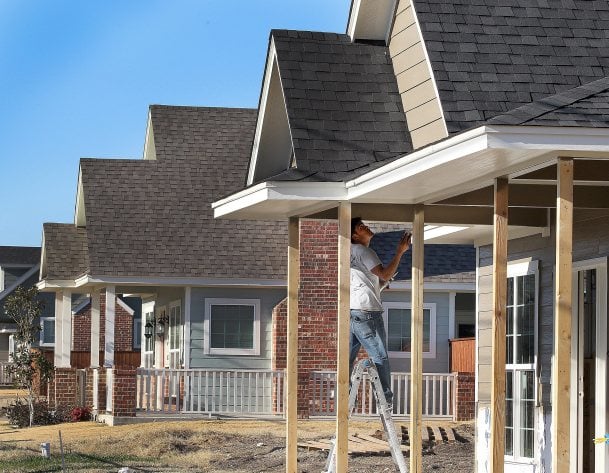 Staff Photo — Jerry Larson A worker looks over framing of a house under construction at the Magnolia Villas off Bosque Boulevard. 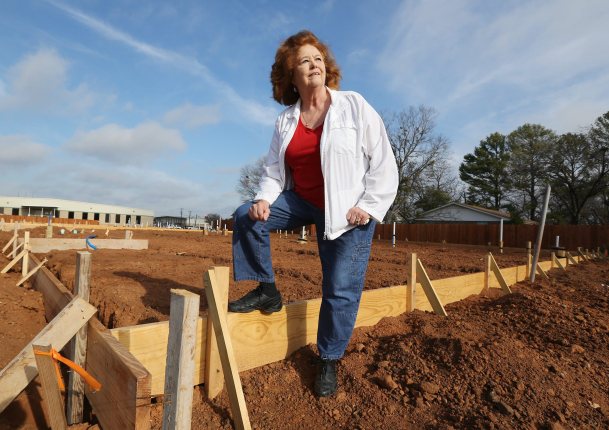 Staff Photo — Rod Aydelotte Marty Bush talks about her dream of Waterford Village, which is aimed at smaller households.

ABOVE: Marty Bush, who is developing the Waterford Village project with her husband, envisions an “old-timey” neighborhood with small lots and common spaces. BELOW: The Magnolia Villas subdivison off Bosque Boulevard and 46th Street offers closely packed homes with lawns maintained by a homeowners association.

Marty and Jim Bush walk through the foundation sites of their Waterford Village subdivision, which is aimed at homebuyers who don’t need a house for a large family.

The entrance to Magnolia Villas off Bosque Boulevard and 46th Street.

Staff Photo — Jerry Larson A worker looks over framing of a house under construction at the Magnolia Villas off Bosque Boulevard.

Staff Photo — Rod Aydelotte Marty Bush talks about her dream of Waterford Village, which is aimed at smaller households.

Before the housing bust four years ago, the  typical recipe for a subdivision was simple: Build the biggest house on the biggest lot your customer can afford.

But as the frozen housing market starts to thaw, some Waco developers are betting on an alternative: a “pocket neighborhood” with smaller houses, low-maintenance lots, with plenty of amenities and common spaces.

At least five such projects are in the planning or development stage in various parts of Waco, representing 317 homes if all are built out.

Magnolia Villas on North 46th Street is already partly occupied and expected to be built out with  37 closely packed homes by year’s end. Cameron Heights on North Fifth Street and Waterford Village on Alta Vista Drive are preparing to pour

foundations. Tinsley Place brownstones, a downtown rental development with a similar concept, is set to develop its first phase this year. Meanwhile, the nonprofit group Waco Community Development Corp. is proposing to develop a pocket neighborhood with 25 owner-occupied homes on the city-owned Sanger School property.

All five projects are nestled into older neighborhoods and are touted as community-oriented, with neighborly features such as porches, shared green space and pedestrian connections.

“I wanted to build a community, instead of building a house — it’s a big difference,” said Marty Bush, who is developing the Waterford Village project on land she owns with her husband, former Mayor Jim Bush. She said she wants an “old-timey community atmosphere” with a “lot of little houses and where everybody knows everybody.”

The pocket neighborhood concept is still a niche in the Waco housing market, but the trend has been growing for years in larger cities. Waco city planners say such developments could help repopulate a struggling inner city, and they’re looking at making regulations more friendly to denser developments.

Changing demographics and the economics of the housing recovery are helping drive the pocket neighborhood concept, developers and real estate experts say. They say lenders are still conservative after the housing frenzy of the mid-2000s, when many people got loans for more house than they could afford.

“The one I think most (urban) developers are going after are the over-55 semi-retired empty-nester who doesn’t want to have to mow the yard but wants quality development,” said James Gaines, a research economist at the Texas A&M Real Estate Center. “What they’ve discovered in these projects is that it’s about 50-50, with the other end being the young empty-nesters, urban professionals who are married or single but with no kids. They’re looking for convenience and a central location.”

Developer Steve Sorrells said he has heard interest from both ends of the age spectrum for his cottage development near downtown, called Cameron Heights.

He said both populations tend to be interested less in maintaining a house and more interested in the leisure activities available close to downtown, such as restaurants, Baylor games and Cameron Park.

“It’s good for both sides,” he said. “It hits the right price point for older folks who are done with mowing the big yard every Saturday. They want to travel and have fun, and at the same time they can watch out for their neighbors and wave and have a conversation.”

Sorrells expects to finish the first of his Cameron Heights homes by June.

The first phase includes 50 homes ranging in size from 900 to 1,500 feet, connected by green spaces and walkways. Units will be for sale or rent, but Sorrells said he ultimately hopes to turn them all into condos. A second phase would offer 19 more condos. The homes will sell for $120,000 to $170,000.

On the other side of downtown, developer Shane Turner hopes to draw the same mixture of young professionals and empty-nesters to Tinsley Place.

Turner expects by August to finish the first 30 units of a planned 154-unit rental “brownstone” development that will offer amenities such as private garages and landscaped green spaces, making them more like houses than apartments. The homes will be three stories high, allowing for true urban densities of 28 units per acre.

Turner has renovated several downtown buildings and sold them as high-end lofts. He lives in one himself.

He described Tinsley Place as an “urban village” that offers a similar experience without the commitment.

“We wanted to offer something for young professionals who want to experience downtown before making a decision to purchase downtown,” he said.

In the one pocket neighborhood that already is occupied, the main demographic so far is retirees.

So far, a single photographer is the only young adult homebuyer. More common are those who are downsizing after seeing their children grow and leave, Chip Gaines said.

“What we’ve learned is that couples have found it easier to travel and see the kiddos instead of keeping a 3,500-square-foot existence,” he said. “It’s a very freeing lifestyle. A lot of folks who move into this development have to let go of all this stuff, and it’s hard for them. But then you run into them later, and they say, ‘We were so weighted down with all these pieces of furniture.’ ”

Peggy Williams, 80, moved there in 2011, after her husband moved into a nursing facility and she was left alone in a large house on a 40-acre homestead on Highway 6.

“It was just too much for me to take care of,” she said. “My son bought my house for me, and I’ve loved every bit of living here.”

Williams was happy to hand over lawn care to the homeowners association, though she keeps some bougainvilleas on her porch. And she hasn’t minded trading down to a smaller kitchen.

“I gave away 10 boxes of mostly kitchen items, and I haven’t missed any of them,” she said.

The Waterford Village development that Marty Bush is developing in the Alta Vista neighborhood is similar to Magnolia Villas in size, price and concept. The small lots will be maintained by a homeowners association, and residents will have a common green space planted with fruit trees.

To maximize space, the homes will be built in pairs with shared walls.

Her husband, Jim Bush, a longtime builder who is involved in the project, said it fits in with the city of Waco’s goals of “infill development” rather than suburban sprawl. While he was mayor, the city adopted the “Imagine Waco” plan that called for a denser, pedestrian-oriented Greater Downtown.

But like the rest of the neighborhoods, Waterford Village had to jump through extra hoops to be able to develop more densely.

By contrast, Magnolia Villas has six units per acre, Waterford Village has seven, the proposed Sanger School redevelopment has eight, Cameron Heights has 16 and Tinsley Place has 28.

Developers can build with such densities only if they apply for “planned unit development” zoning.

That involves negotiations with city planners and requires case-by-case approval by the plan commission and city council. In the process, a high-density project can meet stiff opposition from neighbors, and council approval is never guaranteed.

Peters said a better process would set out criteria for higher-density projects to give developers more predictability. He said such measures could be included in the new Comprehensive Plan that will be drafted and approved this year.

“One of our goals is create more density and sustainability using existing infrastructure,” Peters said. “One tool to accomplish that is to restructure the zoning ordinances so the approval process isn’t so tedious.”

James Gaines, the research economist, said many cities say they want compact infill development but then discourage it by putting up regulatory hurdles. Those hurdles can add costs to urban development, causing developers to either give up or limit their projects to high-end housing.

“All developers are asking for is a fair shake: Tell me what the rules are and follow your own rules,” he said.

Sorrells said he has found Waco to be more flexible than some towns in working with developers on nontraditional projects, and he’s glad to see the city trying to simplify the process.

“It makes all the difference,” he said.

On a downtown block dominated by big construction, a tiny house is turning heads.