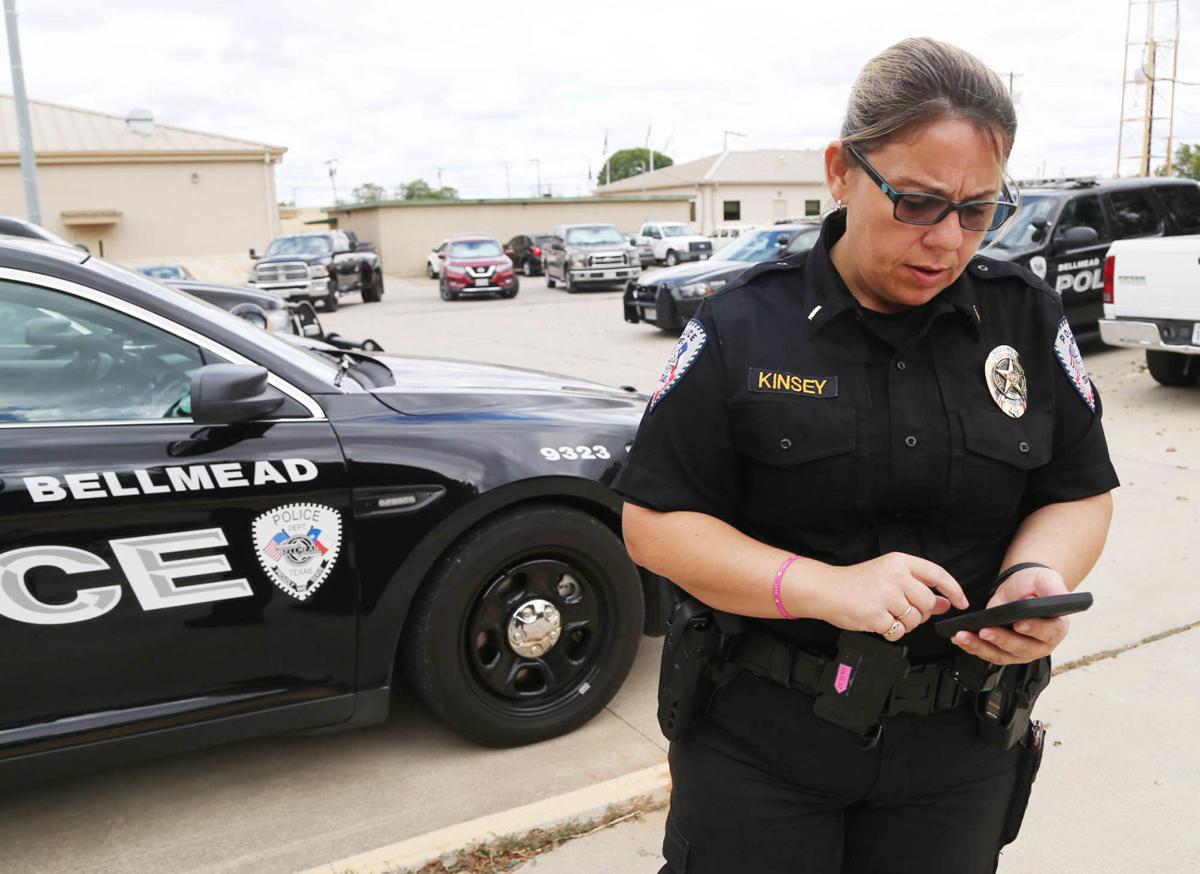 Bellmead police Lt. Brenda Kinsey checks her department-issued cellphone Tuesday. The department is pursuing more storage space to comply with a new law on maintaining public records, while other entities are simply banning certain types of communication for official business. 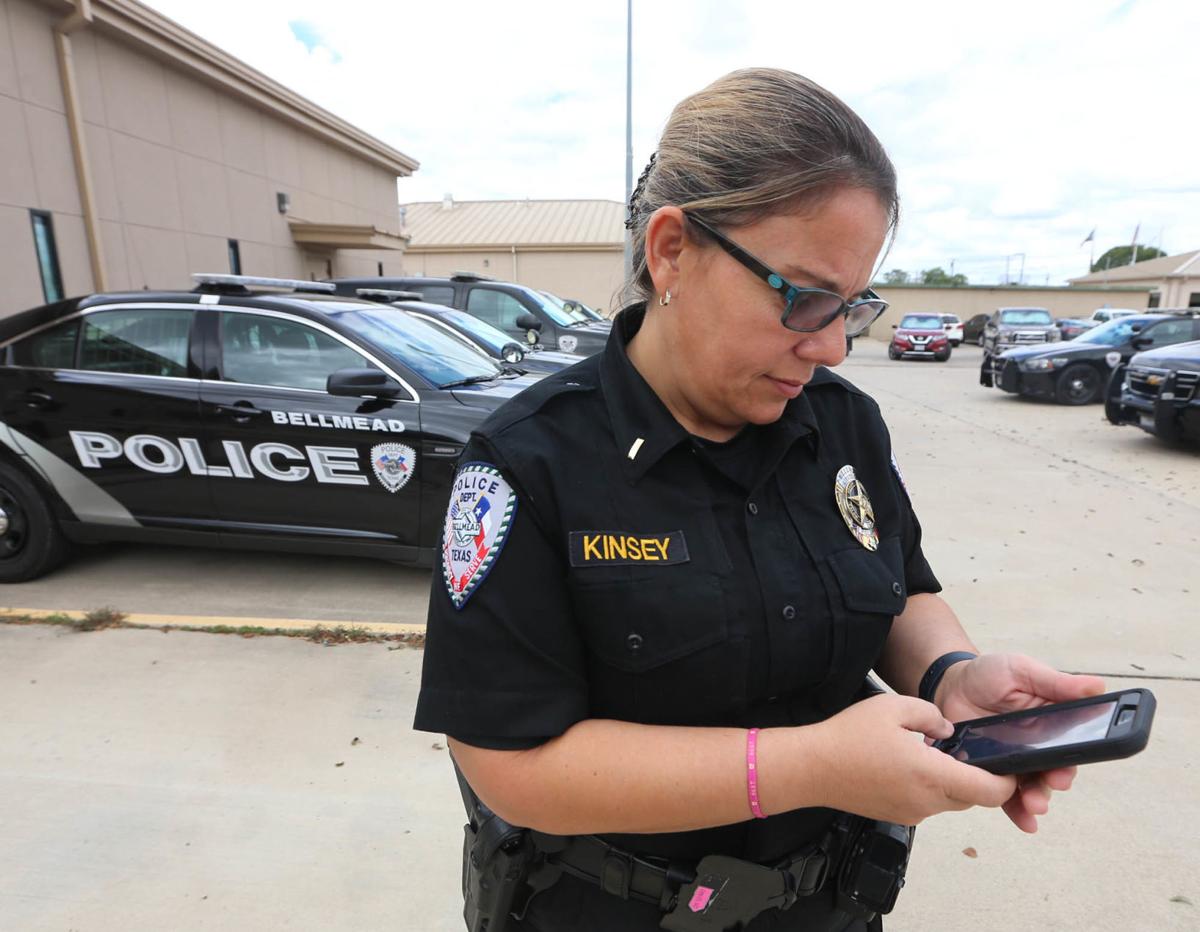 Bellmead police Lt. Brenda Kinsey checks her department-issued cellphone outside headquarters Tuesday. The department is pursuing more storage space to comply with a new law on maintaining public records, while other entities are simply banning certain types of communication for official business.

Bellmead police Lt. Brenda Kinsey checks her department-issued cellphone Tuesday. The department is pursuing more storage space to comply with a new law on maintaining public records, while other entities are simply banning certain types of communication for official business.

Bellmead police Lt. Brenda Kinsey checks her department-issued cellphone outside headquarters Tuesday. The department is pursuing more storage space to comply with a new law on maintaining public records, while other entities are simply banning certain types of communication for official business.

Dixon said a new state law that became effective Sept. 1 puts more clout in laws that make job-related text messages, even those delivered after hours or with personal phones, subject to public scrutiny.

Dixon later said he was only half-joking about talking instead of texting but maintained that would be his preferred means of communication on the job.

Cities, counties and other governmental entities around the state face sorting through the nuances of the new law and applying them locally, Dixon said. He provides legal counsel to McLennan County and several local municipalities.

“There are some changes to the law, but not many. Most important is having to archive all that information,” Kinsey said. “I have a city-issued phone, as do others. Getting one depends upon the duties of your job.”

Waco police are now prohibited from texting about official business, even on city-issued cellphones, according to a notice from Sgt. W. Patrick Swanton sent late last month. Officials will have to either make calls or send emails, Swanton wrote.

“It will no longer be appropriate for us to text official business through our personal or work cellphones,” he wrote. “Officers can now be charged with a Class A misdemeanor if they do not follow this new law as those formats are not properly archived.”

The law, which advanced as Senate Bill 944, does not necessarily break new ground but does go further in compelling compliance, Dixon said.

“We’ve always treated official conversation on personal devices as public information. We’ve made it clear that even if someone is using his or her own phone, the information may be public information,” Dixon said. “This law is a departure in that it places more emphasis on ensuring people do not run afoul of the law. The statute places a lot more responsibility, and the potential for a lot more punishment, on employees and officials themselves.”

Issues that officials must address include determining who would be responsible for storing text messages and emails, how often text messages from individual phones would be downloaded and stored, and how to safeguard and provide assistance to employees to ensure compliance with the law going forward.

“Dumping the contents of 90 phones every day would not be feasible. We couldn’t be having that,” Dixon said. “It would have to be a periodic deal.”

Accessing archived text messages also must be addressed, Dixon said. The county must have procedures in place to retrieve messages in a timely fashion as it complies with Public Information Act requests.

Then there is creation of a “records retention schedule,” he said.

“That is not very clear in the law. It varies based on the importance or nature of the correspondence,” Dixon said. “Was it merely a cover letter, an invitation to a meeting, or was it a letter proposing a policy change?”

The length of time the county, or another governmental entity, must keep a message on file will vary with the content of that message. But where and by whom the line of distinction is drawn remains subjective, Dixon said.

“Texas has the worst records retention policies around,” he said. “They are archaic and not anywhere close to being caught up with the modern world.”

Officials are continuing to work on producing a policy or guidelines, County Administrator Dustin Chapman said.

Records show the county has issued more than 100 cellphones to employees of the McLennan County Sheriff’s Office, the road and bridge department and to several constables who requested them, Chapman said.

“The Attorney General for 10 years has determined that county or city business discussed on a personal device is public information. That has not changed,” Dixon said. “This is going to be a little more of a hassle, but we want to let employees know we will be there for them, we’re looking forward to providing for them some technological assistance. We have to keep in mind that noncompliance could be determined to be a violation of the Freedom of Information Act, which involves some stiff penalties, including fines and possibly removal from office. We’re trying to make it as simple as possible.”