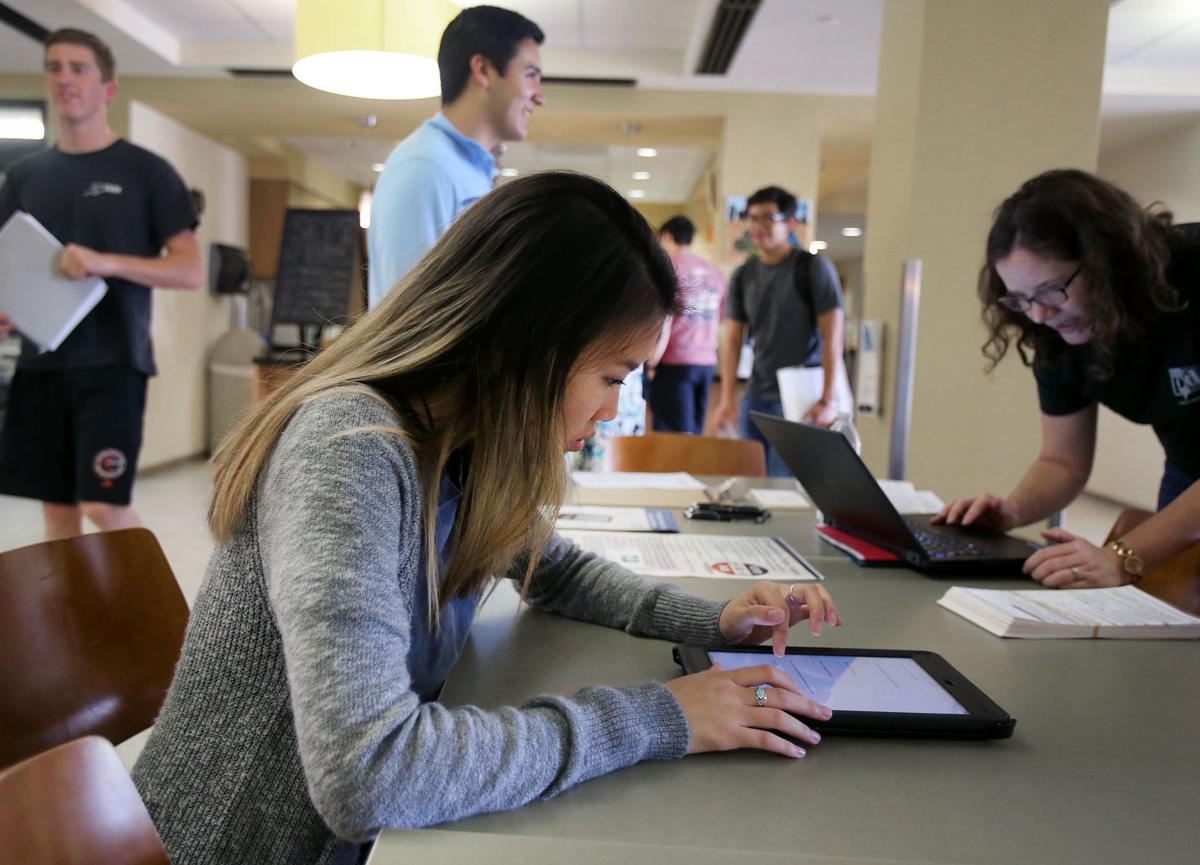 Baylor University student Hannah Walker fills out a pledge to vote during a voter registration event at North Russell Hall. 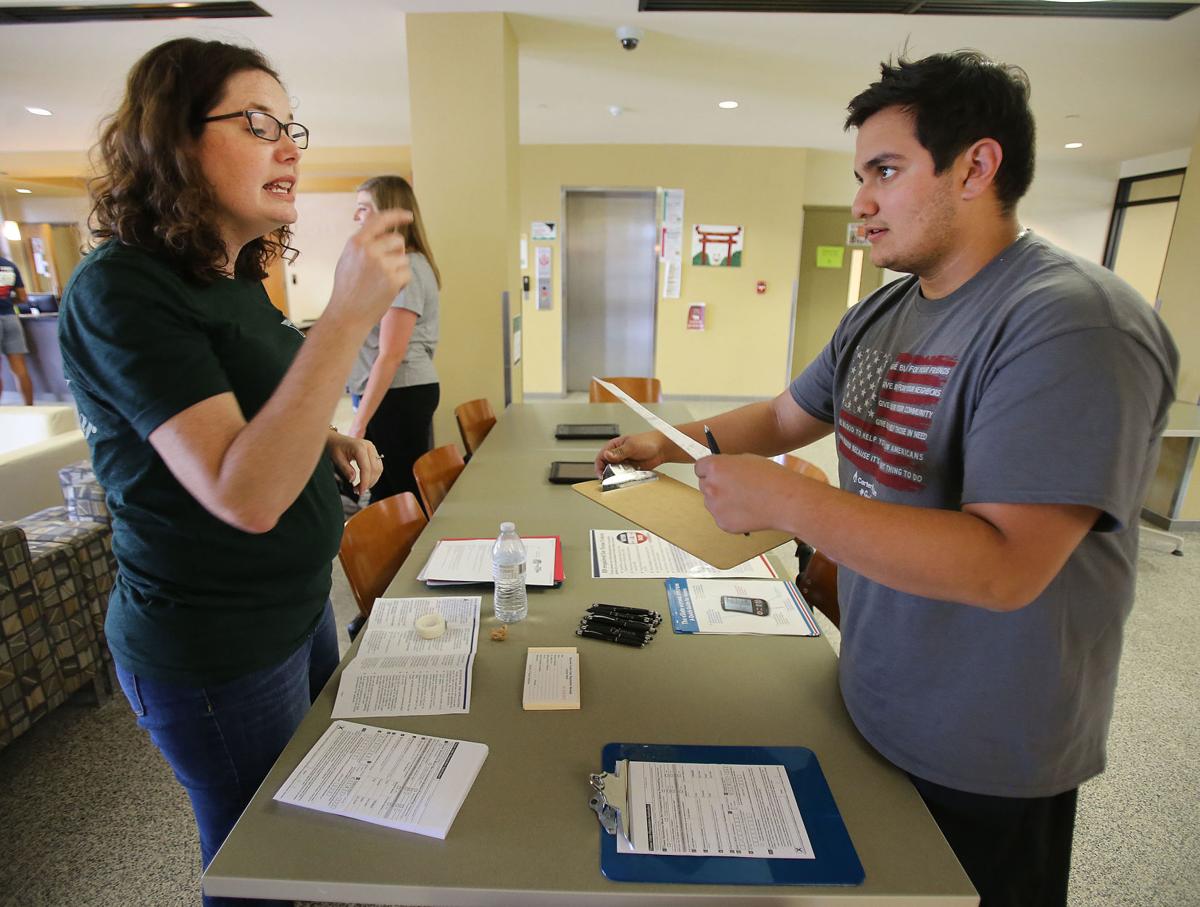 Baylor University student Antonio Cardenas listens to Erin Payseur Oeth as he takes a voter registration form to fill out. 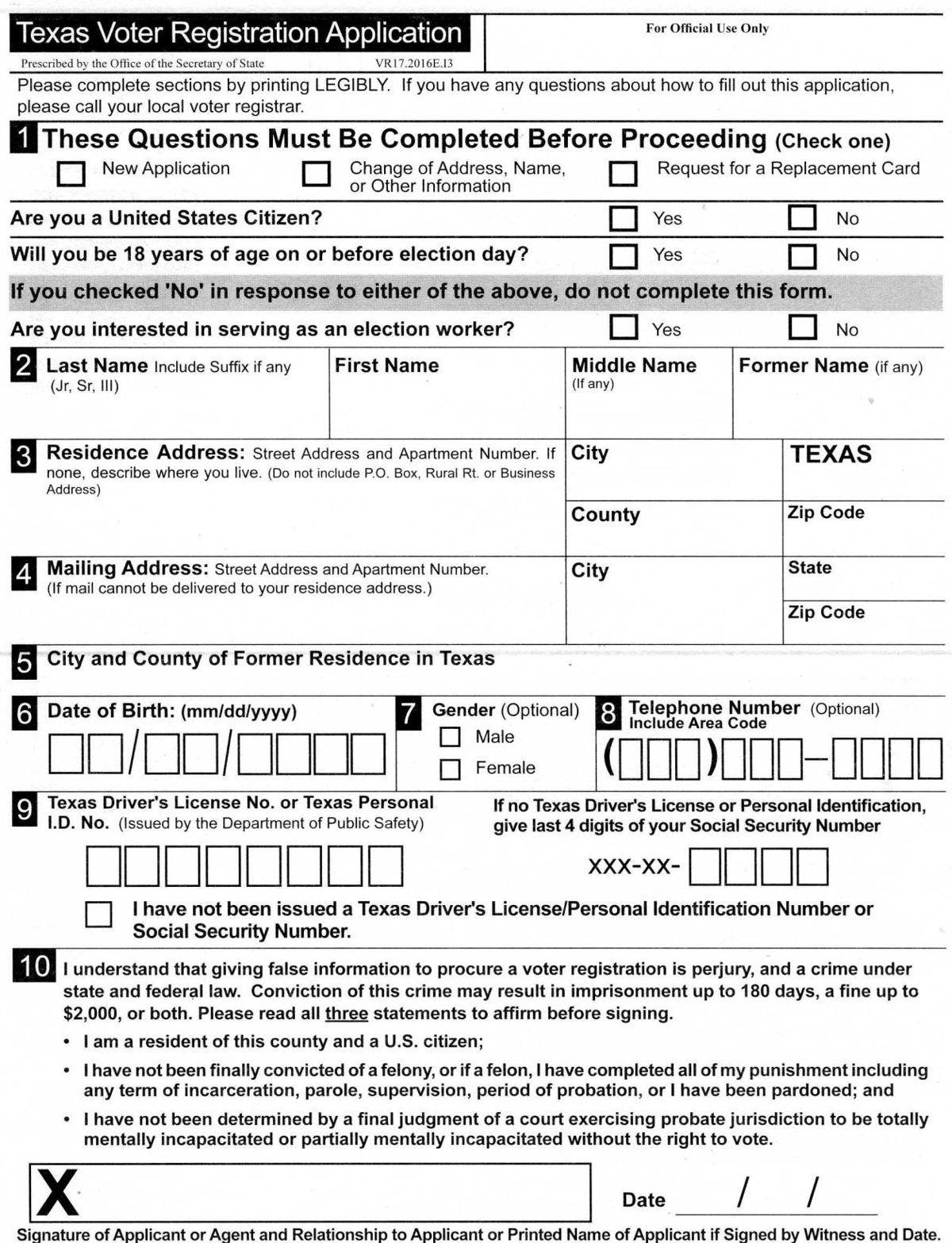 Another 1,000 McLennan County residents registered to vote over the past 21 days as voter registration efforts continue leading up to the Oct. 9 deadline for the Nov. 6. midterm election.

As of Friday, there were 138,509 total registered voters in McLennan County, the highest amount registered over the past decade. Meanwhile, the state of Texas last week set its own new record 15.6 million — for its highest number of registered voters, Texas Secretary of State Rolando Pablos wrote in a recent statement.

The November ballot includes city council and school district races and countywide positions, including the seat for county judge. The ballot also includes statewide races for governor, lieutenant governor and attorney general, and for the state’s two highest courts.

Voter registrars are also reminding people the last day to apply for a ballot by mail is Oct. 26. Residents are allowed to vote by mail if:

County Elections Administrator Kathy Van Wolfe said her office has seen a steady stream of people coming by to register and to become voter registrars. Van Wolfe said she’s seen the local Republican and Democratic parties hosting several events and efforts to get people registered along with officials with Baylor University, the NAACP, and the League of Women Voters, among other organizations.

“It’s always busy at this time of year when we’re getting close to any deadline,” she said. “People love a deadline.”

Van Wolfe said she expects to see foot traffic increase on Tuesday since it’s the last day to register.

“People here are the most affected by policy changes,” he said.

García Arreola said there is a lot of misinformation regarding voting and who can register to vote.

“We get a lot of people who are told oh I’m a felon I can’t vote,” he said. “Some have been off paper for 20 years and didn’t know they could vote.”

So many people still believe their vote doesn’t count or doesn’t matter, he said. The group often encounters new U.S. citizens that don’t know how to begin to register to vote, much less get involved politically, he said.

Janet Wallace said she’s in her second year as a voter registrar and she’s realized how many people don’t realize they need to keep their residential address updated on their voter registration. Often a lack of voting or keeping an address updated can put a voter on the state’s “suspense” list.

A suspense status is a step toward the Secretary of State’s Office removing that voter from the registered voter rolls. The Secretary of State’s Office removes voters from the registered voter rolls if a voter is in “suspense” status, meaning the voter’s record in the county’s system has an incorrect address, and the voter does not vote or correct their information in two federal election cycles.

An individual on the suspense list, however, is still a registered voter and has the same rights as a non-suspense list voter.

The areas of the county with the highest numbers of suspense voters are those who live largely around the Waco Convention Center, China Spring Independent School District administration building, the Lacy Lakeview Civic Center and the Hewitt Public Safety building, according to the latest voter count by precinct.

Wallace said she was originally motivated to become a registrar because she was concerned there were people being left out of the voting cycle. She said she spent this past Sunday at Pastor Jimmy Dorrell’s Church Under the Bridge registering those interested to vote.

Voter registrars are at the Doris Miller Department of Veterans Affairs Medical Center to help register any of the interested roughly 1,200 employees, said Nancy Bryant, with Local 1822 chapter of American Federation of Government Employees.

“We tell our employees vote as if your future depends on it because it does. Your livelihood, your families’ you’re trying to support, you retirees out there, that’s the rest of your life and your pension,” she said.

Bryant said the local chapter hasn’t held voter registration events in a few years and that’s changing now. The election of the new administration in 2016 has reinvigorated the group to encourage union workers and veterans to register, she said.

“I think everyone is, what is the term, everyone is now woke,” Duty said.

How to register to vote

How to register to vote

To be eligible for registration as a voter in McLennan County, a person must:

Be at least 17 years, 10 months of age to register and be 18 years of age by Election Day.

Be a United States citizen.

Be a resident of McLennan County.

Have not been determined by the court to by mentally incapacitated.

If having been convicted of a felony, have completed all punishment, including any term of incarceration, parole, supervision, period of probation, or have received a pardon.

Oct. 9 is the last day to register to vote for the Nov. 6 election.

The written application can be submitted to the Elections Administration Office in the Records Building, 214 N. Fourth St., suite 300, in Waco, between 8 a.m. and 5 p.m. Monday through Friday. The application must be delivered to the office, or postmarked, no later than Oct. 9.

The application requires a person provide a Texas driver’s license number or personal identification number issued by the Texas Department of Public Safety.

Anyone without those numbers can provide the last four digits of their social security number.

Anyone without a Texas driver's license number, personal identification number or social security number must check the box acknowledging so on the form.

Including a phone number is optional but encouraged in case handwriting is not legible.

Forms are also available at any city office, post office or city library and can be downloaded at: https://webservices.sos.state.tx.us/vrapp/vr17-print.asp.

Completed forms can be printed and mailed to:

Voter registration status can be determined by searching by Texas driver's license number, first and last name and birthday, or a Voter Unique Identifier, which appears on voter registration certificates.

November midterm to be Texas' last for straight-ticket voting

The November midterm is set to be the last general election in which Texans can cast a straight-ticket vote, choosing all candidates of a sing…