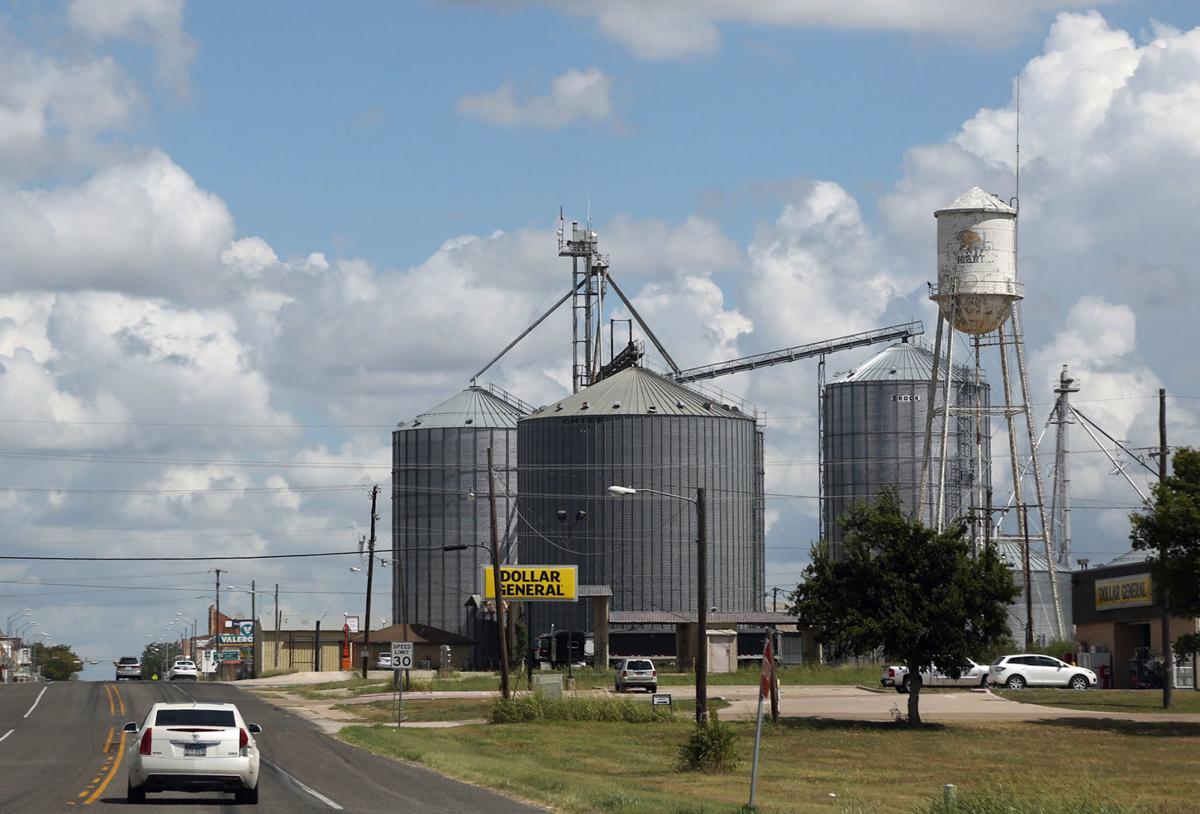 A long-awaited project to overhaul the city of Mart’s water system, and about 4.5 miles of its streets, is expected to start in December. 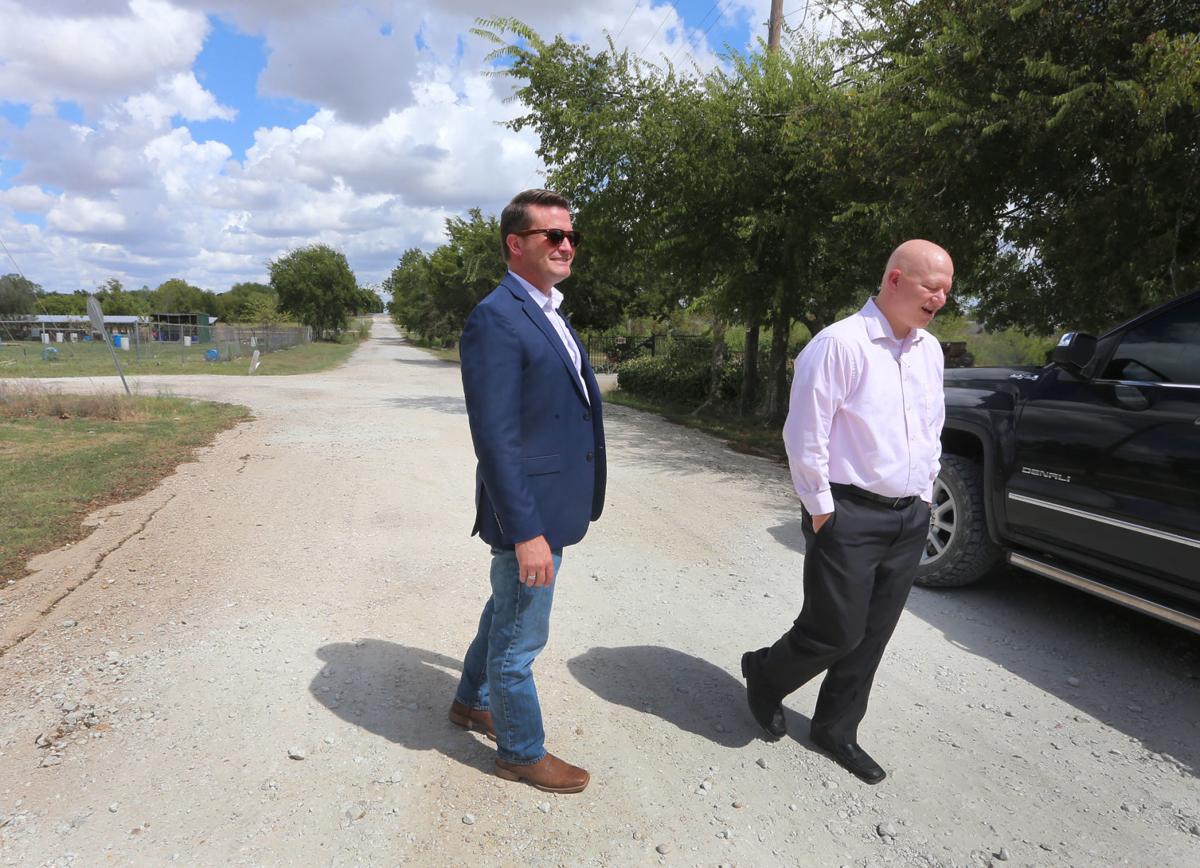 MRB Group project manager Henry Witt III (left) and Mart City Administrator Kevin Schaffer walk down Navarro Street on Tuesday afternoon. The street is one of several that will see improvements when the city overhauls its water system. 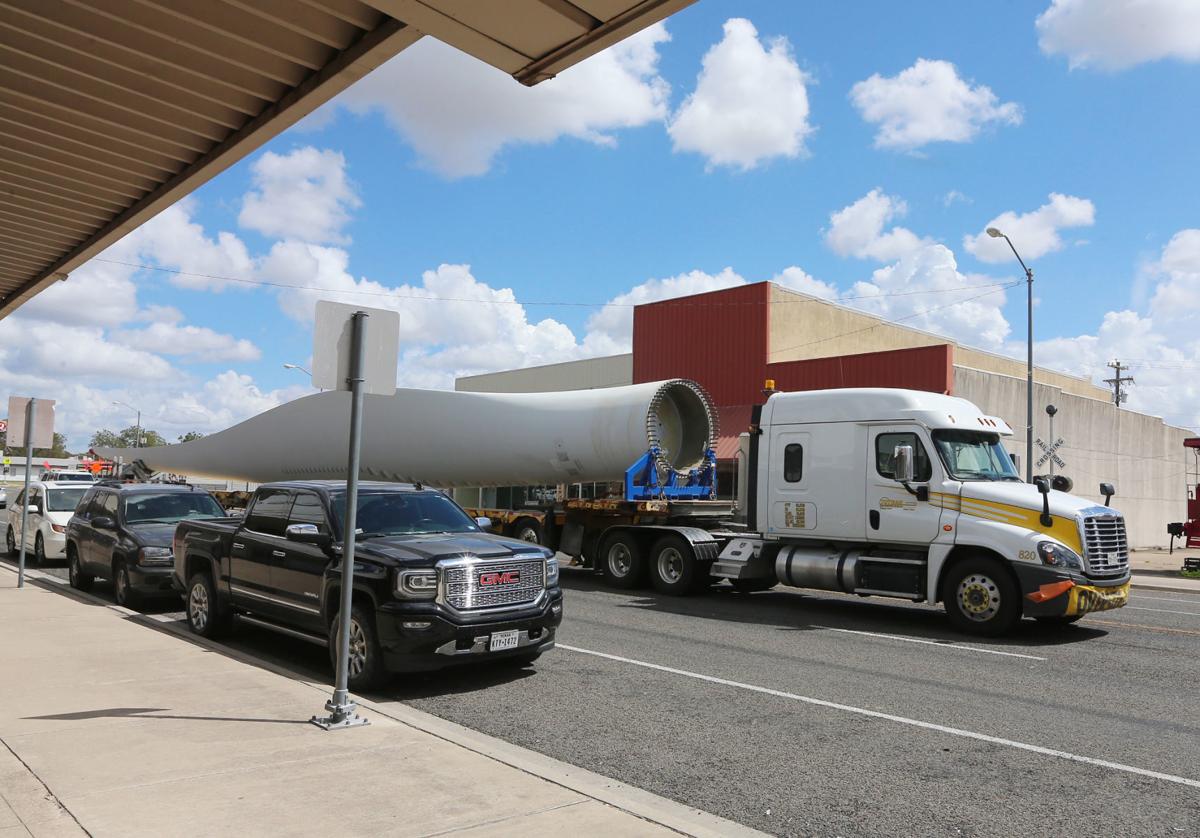 A wind turbine blade moves through downtown Mart on Tuesday. A 100-turbine wind farm is slated to be built in the Mart area, but this blade’s destination is unknown. 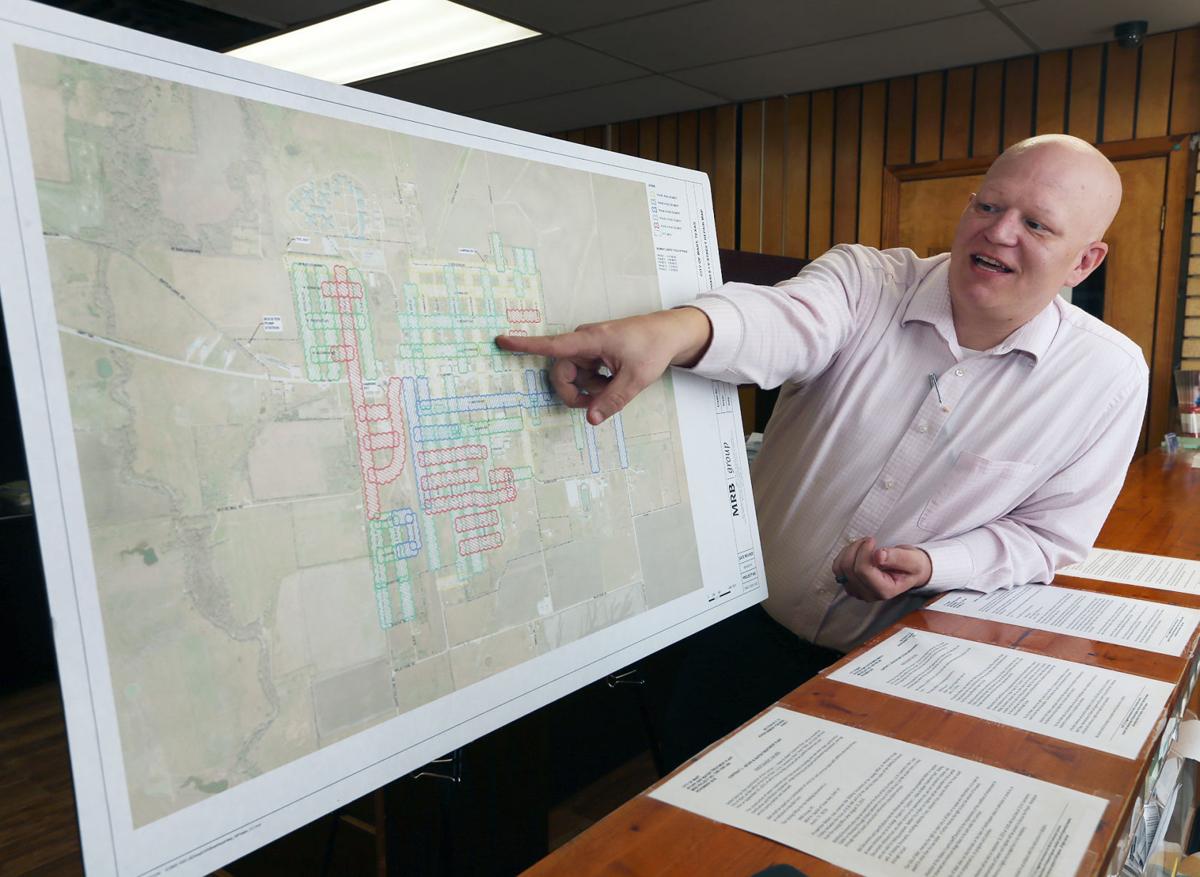 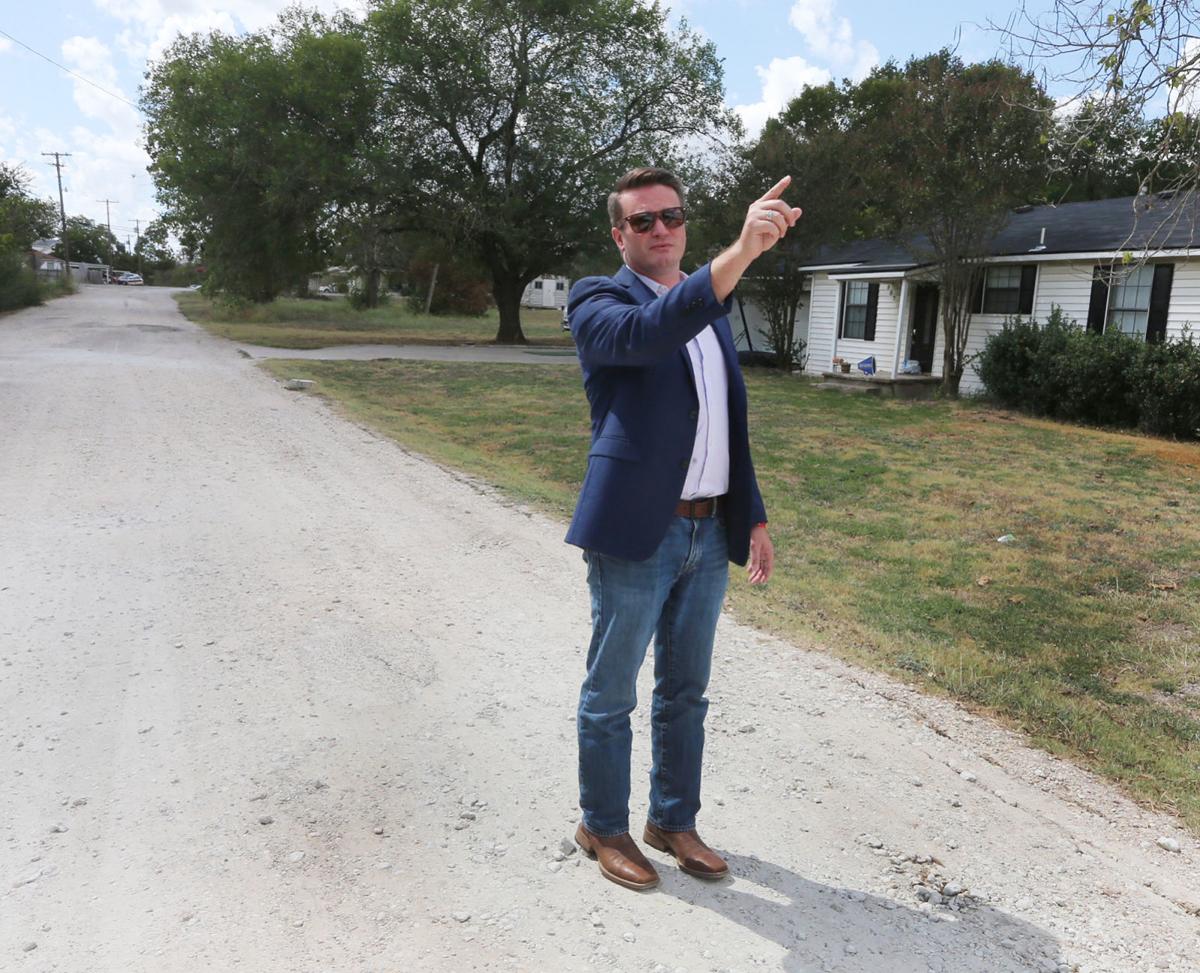 A long-awaited project to overhaul the city of Mart’s water system, and about 4.5 miles of its streets, is expected to start in December.

MRB Group project manager Henry Witt III (left) and Mart City Administrator Kevin Schaffer walk down Navarro Street on Tuesday afternoon. The street is one of several that will see improvements when the city overhauls its water system.

A wind turbine blade moves through downtown Mart on Tuesday. A 100-turbine wind farm is slated to be built in the Mart area, but this blade’s destination is unknown.

The small city of Mart is preparing for big improvements to start before the end of the year.

A long-awaited overhaul of the 2,200-person town’s water system and streets, backed by $17.5 million in U.S. Department of Agriculture funding, is slated to start in early December.

“There are not many towns the size of Mart that have as many great things going on as we do,” said Henry Witt III, a former city council member. “It’s taken six years of work behind the scenes, and everyone is about to see the fruits of our labor and the citizens’ patience.”

Witt, now a project manager with the MRB Group firm providing the city with engineering, architecture, development and planning services, is spearheading the project.

“This is a water project, but because waterlines are underneath our city streets, the streets will be repaired as an added bonus to the waterline work,” Witt said. “It will help with much needed street repair.”

The work is divided into four phases, but construction will take place simultaneously and could last about two years. The first phase recently went to bid, and the rest will follow in the next two months, Witt said.

The project includes about 4.5 miles of new 16-inch water main, 4.2 miles of new 6- to 12-inch waterlines, a new booster pump station and 500,000-gallon ground-level storage tank, and an overhaul of the water treatment plant, City Administrator Kevin Schaffer said. About 4.5 miles of Mart streets will be improved in the process, and valves, fire hydrants and service connections will be replaced.

“It is going to be a game changer,” Schaffer said. “It is an understatement that is is going to be impactful for every resident. People like living in Mart because it’s not a huge city, but we can’t grow as a city without the infrastructure in place to grow.”

Witt said the city is working to complete a contract with the Prairie Hill Water Supply Corp. to sell Mart water to the small rural water supplier nearby. Revenue from that contract, along with other changes, are expected to let Mart pay back its USDA funding without raising its tax rate, he said.

“On the first bid that came out today for the transmission main replacement we came in almost $700,000 under budget, so we are pretty excited about that,” Witt said. “All the phases will be constructed at the same time, so we are looking to start the project in December and it may last up to two years.”

In addition to the city’s water project, a wind farm is slated for the area, and talks are underway on a solar farm that would be situated between Riesel and Mart, Schaffer said.

The $330 million Prairie Hill Wind Project is expected to bring 100 turbines to McLennan and Limestone counties and provide a major boost for Mart Independent School District, Schaffer said. Officials from both counties and the school district have signed off on tax abatement deals for the wind project.

Plans for the solar farm are still pending, Schaffer said. Discussions between Mart, Riesel and McLennan County officials are scheduled, he said.

“We are building a new high school, we are getting a wind farm, we are getting a solar farm and big things are coming to our city,” he said. “I think these improvements are really going to help the city grow for the better.”