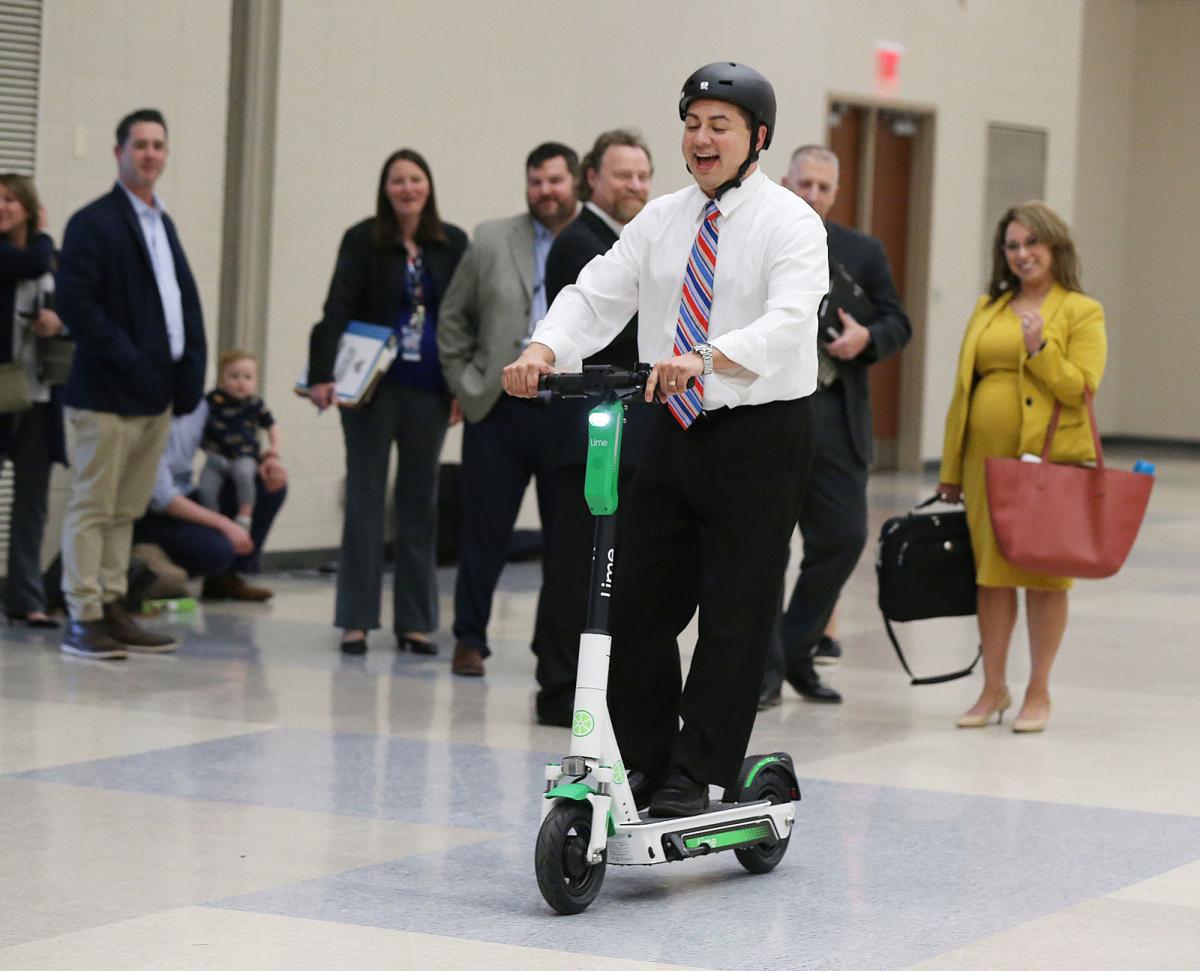 Waco City Councilman Hector Sabido tries out a Lime electric scooter before a presentation Tuesday. The scooters will be available in Waco soon. 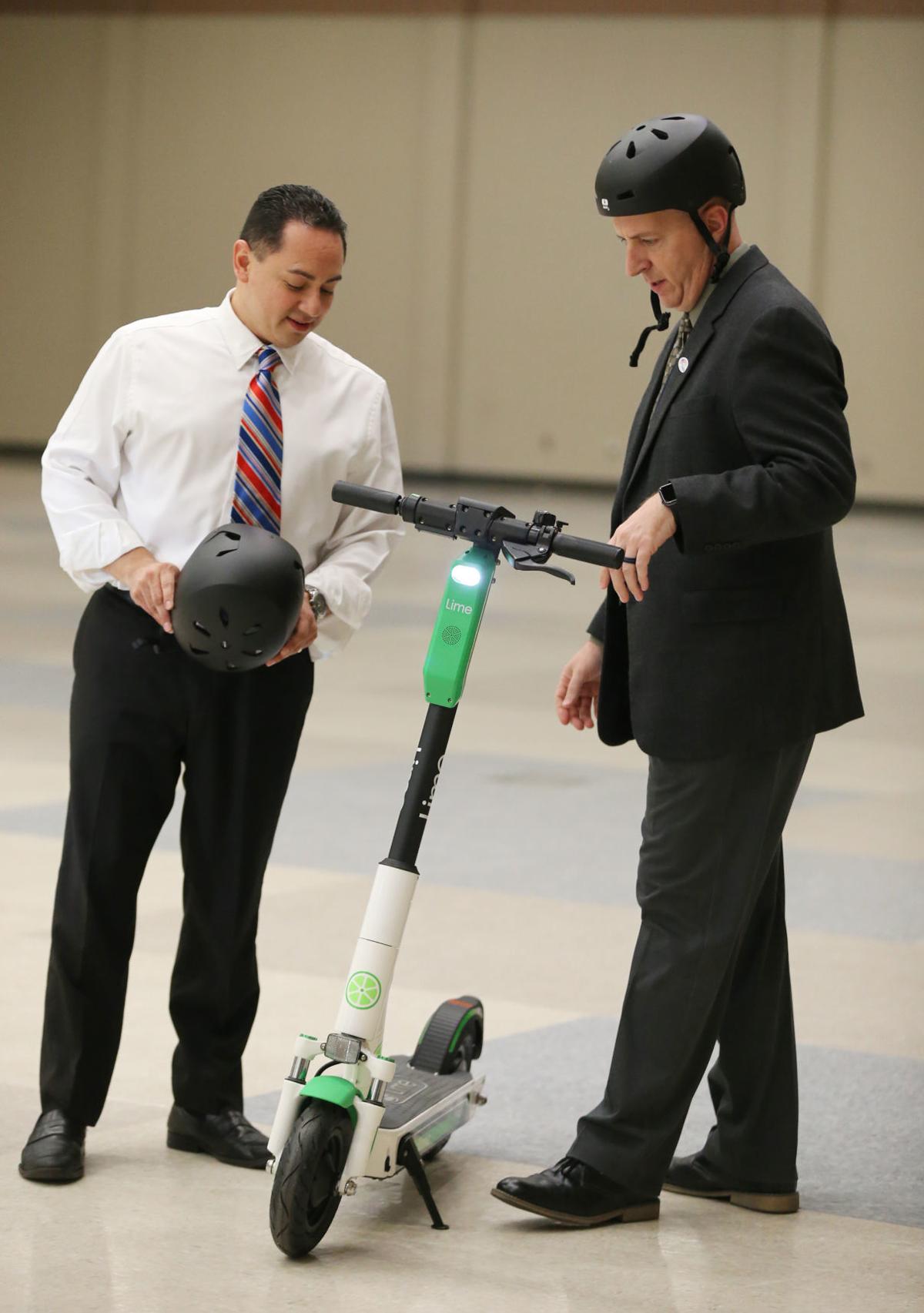 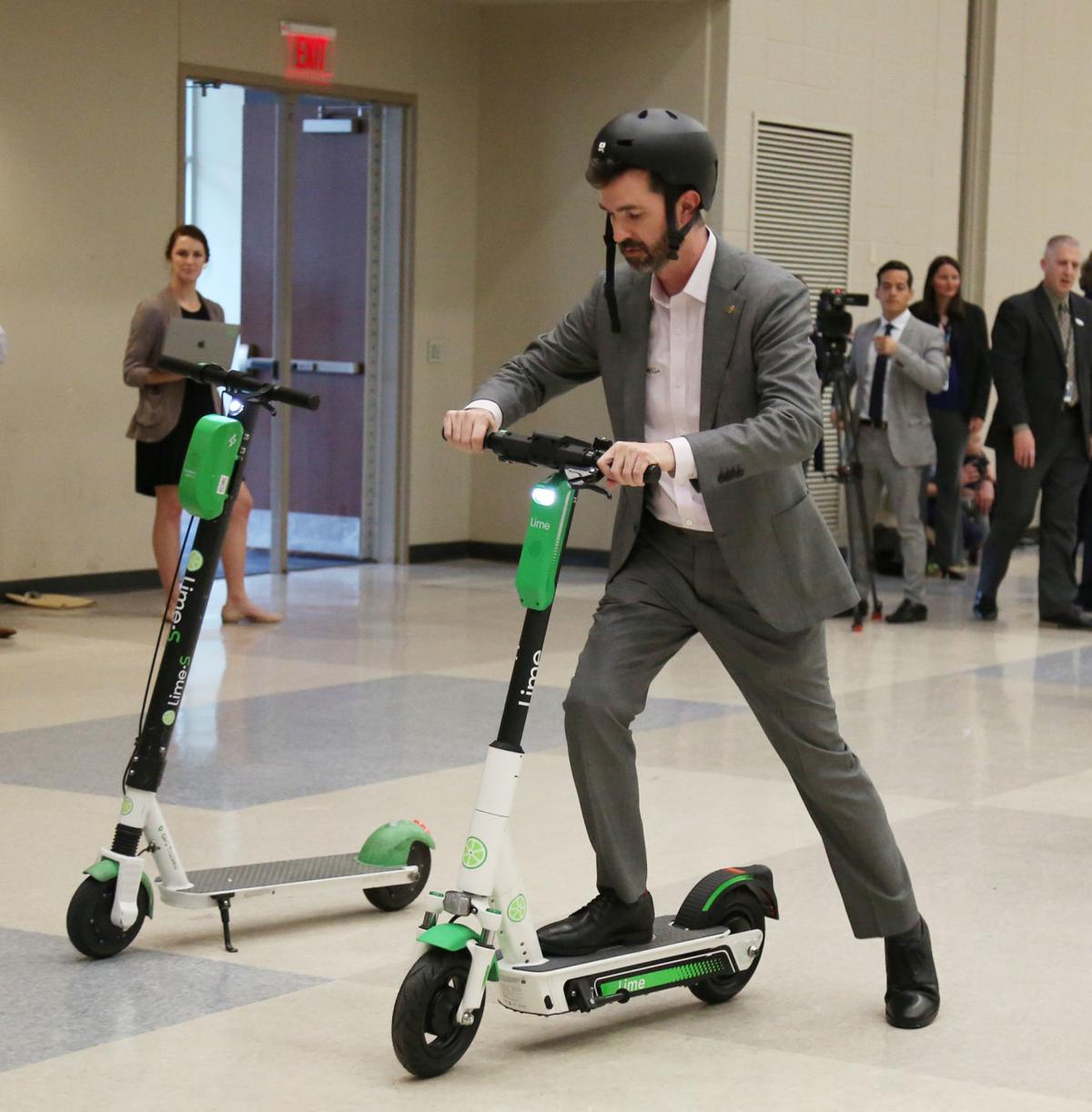 District 3 City Councilman John Kinnaird tests out a Lime scooter during a demonstration in the Waco Convention Center. 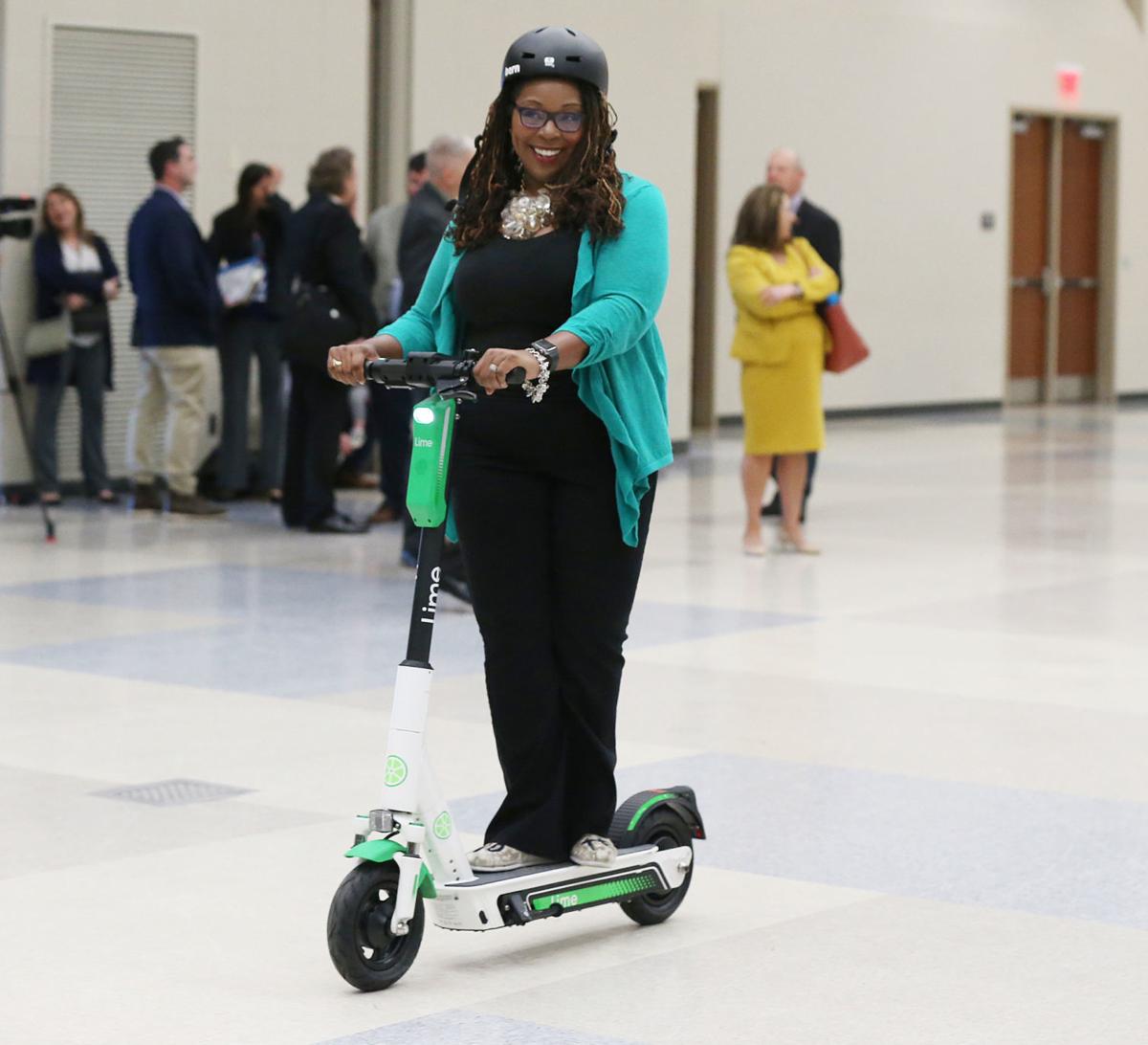 City Councilwoman Andrea Barefield takes an electric scooter for a spin at the Waco Convention Center. 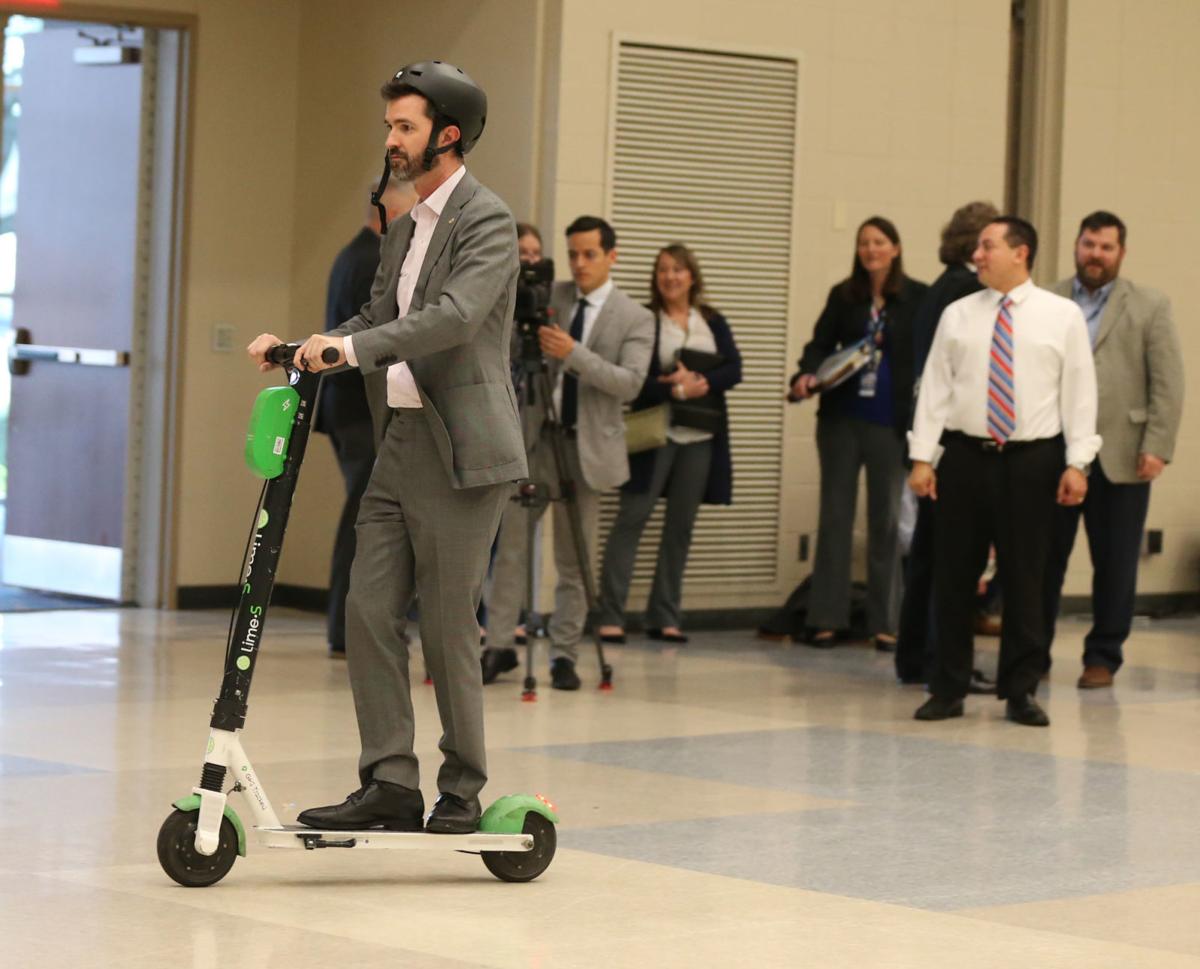 Waco City Councilman Hector Sabido tries out a Lime electric scooter before a presentation Tuesday. The scooters will be available in Waco soon.

District 3 City Councilman John Kinnaird tests out a Lime scooter during a demonstration in the Waco Convention Center.

City Councilwoman Andrea Barefield takes an electric scooter for a spin at the Waco Convention Center.

After fits and starts for about two years, Waco streets are once again set to host a fleet of electric scooters available for quick rentals.

A yearlong scooter pilot program could start late this month or early next month in a limited area, according to officials with Lime, the company city officials chose to allow to bring scooters to downtown.

The city reached an agreement with another company, Gotcha Bikes, in 2018 to bring electric bikes and scooters, but that deal fell through by last summer. The summer before that, yet another company brought scooters to town and started rentals, but the city kicked them out within two days.

Lime ranked highest out of nine companies that made bids in October to come to Waco. It operates in Austin and is now looking for a warehouse that can serve as a Waco headquarters. When operations start locally, there will be about 20 places to hop on a scooter downtown, but that number could increase if needed as the program catches on, Lime director of government relations Nico Probst told the city council Tuesday.

“Having a warehouse and facility in Austin allows us to quickly scale,” Probst said. “We’ve been looking for additional opportunities for growth in the broader Central Texas region because we have such a large facility and a great program operating in Austin, and Waco makes a lot of sense as a next step for us.”

The Lime phone app walks users through a tutorial, showing the rules of the road, the device, and a map of the areas where the scooter can and cannot go. Users must be at least 18, stay off sidewalks, wear helmets, and park the scooter responsibly when they are done.

The company reviews traffic patterns to guide scooter placement. A team in Waco will collect scooters at night to charge and prepare them for the following day.

Scooters will be available from 6 a.m. to 10 p.m. Parking will not be allowed at Cameron Park or in Cameron Park Zoo, and scooters will be barred from Sul Ross Skate Park and Baylor University. If a user brings a scooter into a no-parking area, the ride will not be allowed to end, and the user will continue to be charged. If someone brings a scooter into a no-riding zone, it will automatically slow to a stop.

“In some areas in the city we’ll use what we call ‘slow down zones,’” Probst said. “That’s where we actually reduce the speed to ensure the safety of pedestrians.”

The app will also reward parking the scooters in the proper place with raffles and credits.

District 5 Councilman Jim Holmes said Lime will be particularly important to tourism in downtown, but asked Chelsea Phlegar, a senior planner for Waco’s Metropolitan Planning Organization who has worked on the project, about the city’s safety ordinances for scooters.

She said the city code includes guidelines for where the scooters are allowed but does not include a helmet requirement or an age limit.

“It’s pretty much industry-standard for scooters to have an 18 and over requirement, and I think last year you also brought up the helmet question,” Phlegar said. “We did some research of our peer cities in Texas and there aren’t laws for adults to wear helmets. It’s not required in Texas.”

Phlegar said if the city council is interested in helmet laws, the laws should be about helmets in general and not just for the shared mobility program.

Councilman John Kinnaird said enforcing the rules aggressively when the program launches, possibly in the form of citations, would be key to making sure wayward scooters do not plague downtown.

“People will learn and they will stop doing it, but that’s something on us when we bring them in,” Kinnaird said.

Probst said when a lot of people consistently break the sidewalk rule in the same spot, it is usually an indication that the nearby roadways do not feel safe enough to the users.

The local office is hiring an operations manager, an operation specialist and independent contractors called Lime Juicers who get paid for each scooter they charge.

Lime will bring two models, the lighter Lime-5 gen 2.5 and the bulkier Lime-5 gen 3. District 2 Councilman Hector Sabido, who tested out the scooters in a demonstration just before Tuesday’s meeting, made his preferences clear.

“If I could just make a recommendation that we get the (gen 3) more than the 2.5. It seemed to be just a little more user-friendly and a smoother ride,” Sabido said. “I’m definitely a fan of it.”

A company pulled the plug on a pilot program that was supposed to bring electric bikes and scooters to downtown Waco this summer, prompting th…