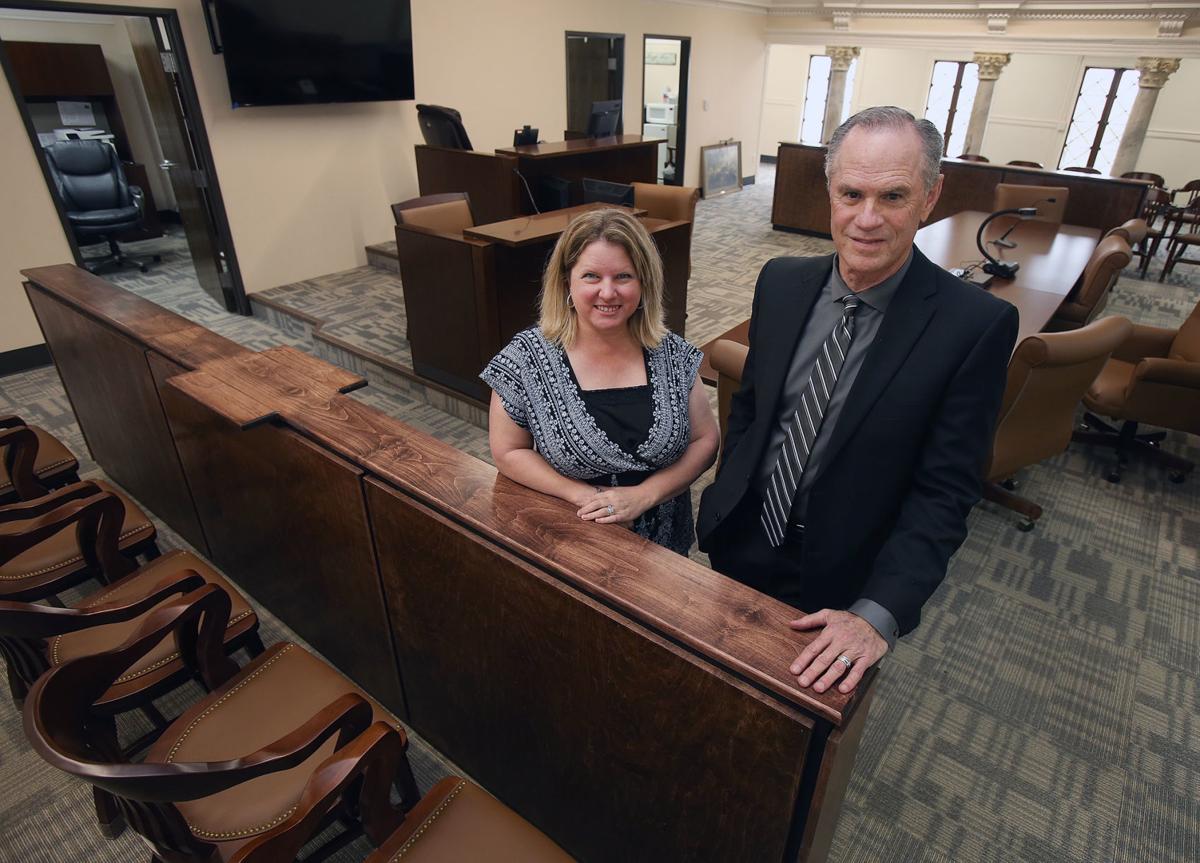 Judge David Hodges (right) and Amy Lowrey, court coordinator for McLennan County’s three specialty courts, stand in the newly renovated space that will become the new mental health courtroom on the fourth floor of the courthouse. 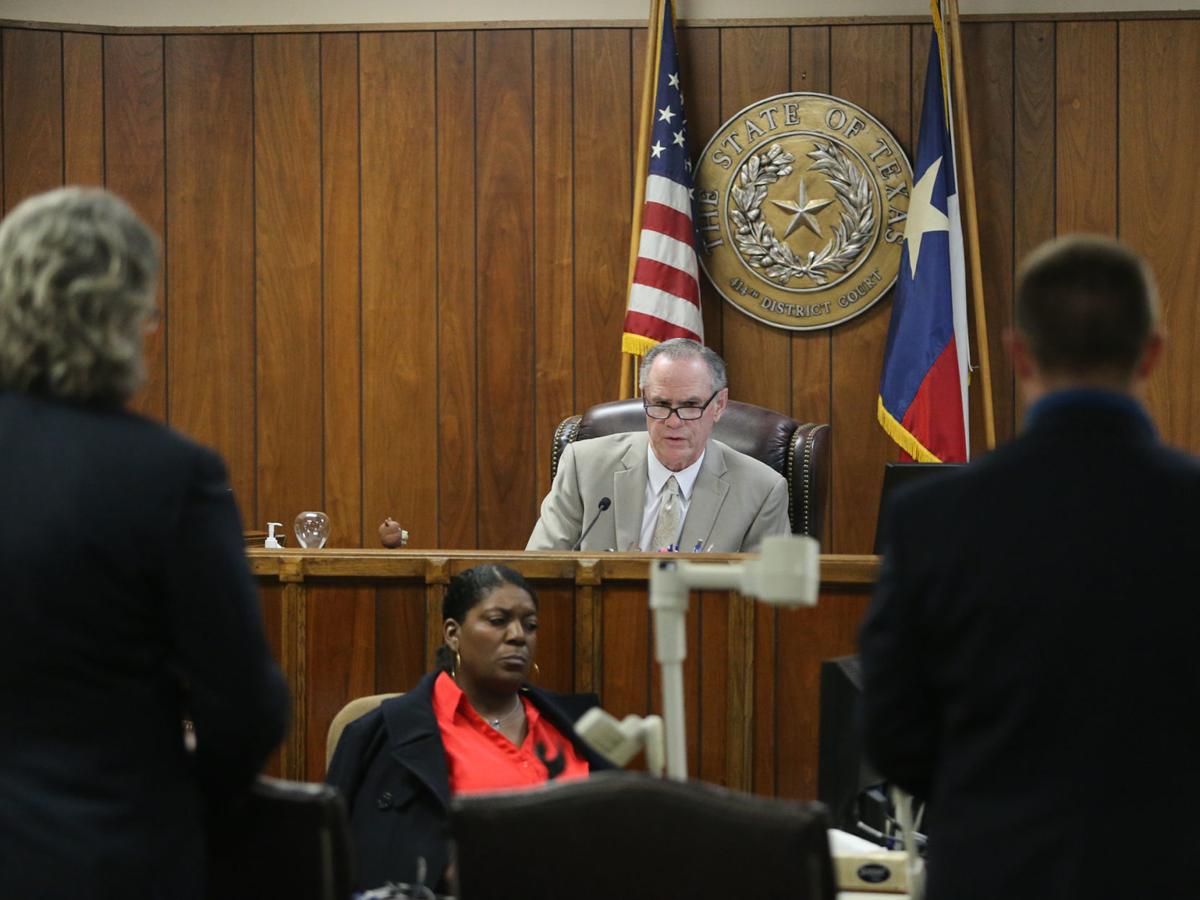 Judge David Hodges kicks off the county’s mental health court with a hearing for a man charged with criminal mischief. The court's first hearing was not held in its newly renovated space because Hodges had to use a court reporter from another court. 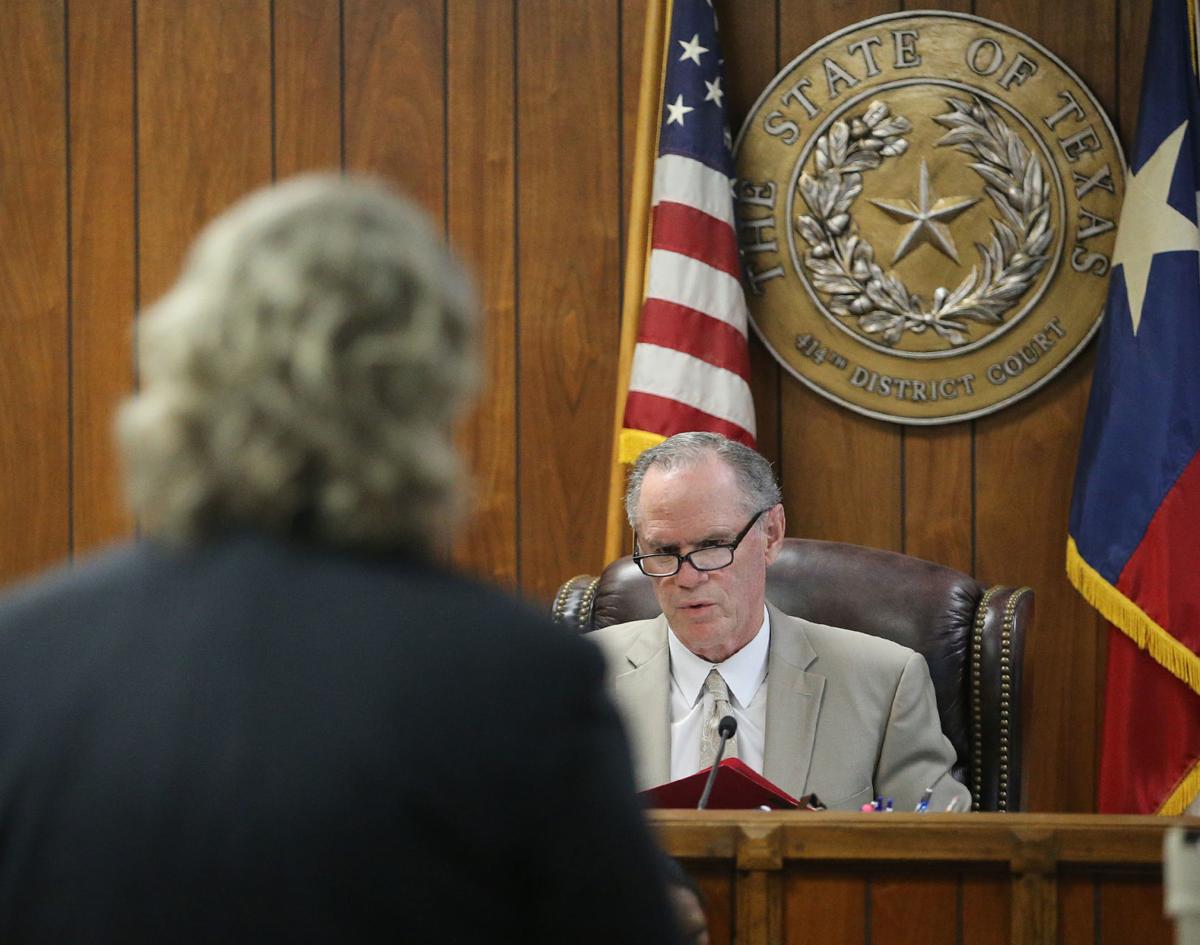 Judge David Hodges holds the first hearing Wednesday in the county’s new mental health court. The hearing was not conducted in the new courtroom because he had to borrow a court reporter from another court.

Judge David Hodges (right) and Amy Lowrey, court coordinator for McLennan County’s three specialty courts, stand in the newly renovated space that will become the new mental health courtroom on the fourth floor of the courthouse.

Judge David Hodges kicks off the county’s mental health court with a hearing for a man charged with criminal mischief. The court's first hearing was not held in its newly renovated space because Hodges had to use a court reporter from another court.

Judge David Hodges holds the first hearing Wednesday in the county’s new mental health court. The hearing was not conducted in the new courtroom because he had to borrow a court reporter from another court.

The 23-year-old Waco man does not know why he was in the parking lot of the McLennan County Jail and does not remember ramming his car into an Austin attorney’s vehicle.

The man was employed and had no previous brushes with the law or a history of mental illness. He was jailed Dec. 11 in the incident and has remained there since being found incompetent to stand trial and diagnosed with a mental disorder.

He also has the distinction of being the first defendant to have a hearing in McLennan County’s new mental health treatment court.

County officials, including Judge David Hodges, who presides over the mental health court, have been planning and establishing protocols for the new specialty court for a year or more. They also had to wait for the fourth-floor law library at the courthouse to be renovated so the court would have a place to call home.

Hodges has been accepting cases involving defendants with mental health issues from other courts this week and conducted his first hearing Wednesday, committing the man for up to 120 days to a local in-patient treatment facility.

Should the man gain competency before then, Hodges will deal with his state jail felony criminal mischief case and possibly place him on probation and into the specialty court’s intensive treatment program.

Hodges, county officials and defense attorneys say they are disappointed at the lack of state-run mental facilities and have grown frustrated that county jails have been forced to become the state’s largest mental health care providers.

Hodges said the new court will allow defendants with mental issues to be dealt with more promptly and more efficiently and save county taxpayers’ money by removing minor, nonviolent offenders with mental health problems from jails and getting them the treatment they require.

Hodges said about 170 of the 1,215 current county jail inmates in McLennan County are receiving medication because of mental illness.

“A regular jail inmate costs $65 a day,” Hodges said. “One being medicated for mental illness costs taxpayers $200 a day, so any of those we can get to out-patient treatment or to another facility, we are saving the taxpayers a lot of money.

“Our judge and commissioners court are very forward-thinking to establish this court. We are one of the smaller counties in the state to have a mental health treatment court, and while it may be overdue, I think it puts us ahead of the game.”

Hodges will work closely with prosecutors, defense attorneys and state MHMR officials, who team with county jail officials to care for and treat inmates with mental illnesses.

Lowrey is a licensed professional counselor, a licensed chemical dependency counselor and worked four years as an MHMR program manager in the behavioral justice division. She also has worked in district attorney’s offices in Coryell County and the 8th Judicial District, which covers Hopkins, Delta and Franklin counties.

The veterans treatment court is not up and running yet, but 74th State District Judge Gary Coley Jr. is putting the final touches on getting it going.

As judge of the new mental health court, Hodges will preside over three levels of misdemeanor and felony cases. He will accept no violent offenders into the program or those charged with sex crimes where probation is not an option.

“The first part is for people who are charged with criminal offenses who are not competent,” Hodges said. “They have a mental illness, they decompensated, they are off their medication, but they committed a criminal offense and they have to regain their competency before they can come to court and dispose of their cases.”

Once they become competent or regain their competency, Hodges will keep the case in his court and dispose of it either by a plea or jury trial. He envisions most of those then will be placed on probation or in a pretrial diversion program and “that will be our mental health treatment court.”

Offenders will be supervised closely to make sure they remain on their medication, receive counseling, if warranted, and comply with the court-mandated curriculum.

The third level involves offenders who previously were found not guilty because they were insane at the time of the offense. Judge Ralph Strother and Judge Matt Johnson, the county’s two felony court judges, each have transferred over about 30 cases to Hodges where defendants have been found not guilty by reason of insanity and been ordered to be treated at a state mental facility.

The law requires the court to have a hearing at least once a year for those in mental facilities to ensure they are where they need to be and in the least-restrictive environment suitable for their mental condition and level of danger to themselves or others.

“I think that we now have what will be a more efficient and expeditious pathway for mental health cases to go through the court system,” Tetens said. “Unfortunately, our county jails have become the state’s mental health facilities. The options are so limited, and if he had not responded as well as he did to the treatment in jail, the result could have been him sitting in jail for over a year waiting for a mental health bed at the state level. This is long overdue for the county.”

Waco attorney Rob Swanton, who has represented many clients with mental illnesses, also is glad to see the mental health court come online.