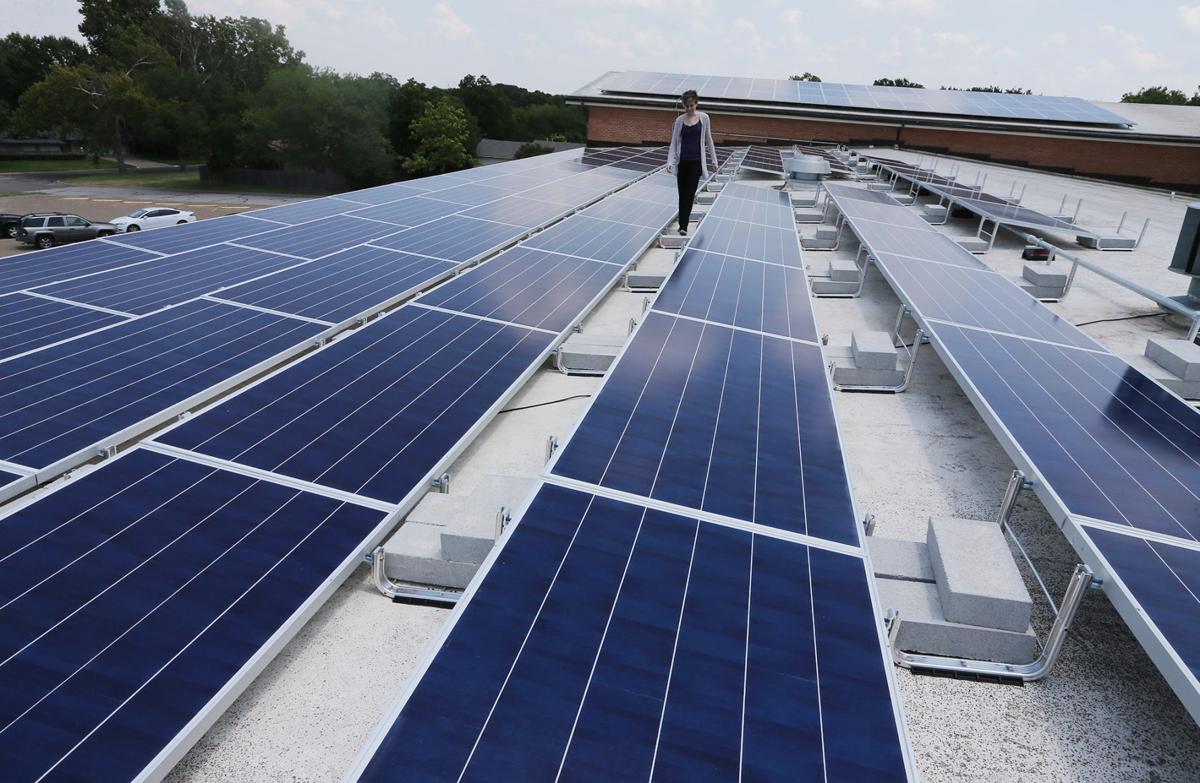 The Rev. Kyndall Rae Rothaus, of Lake Shore Baptist Church, walks between 140 newly installed solar panels on top of the church Friday. The church is the first in Waco to use solar panels to reduce its energy costs. 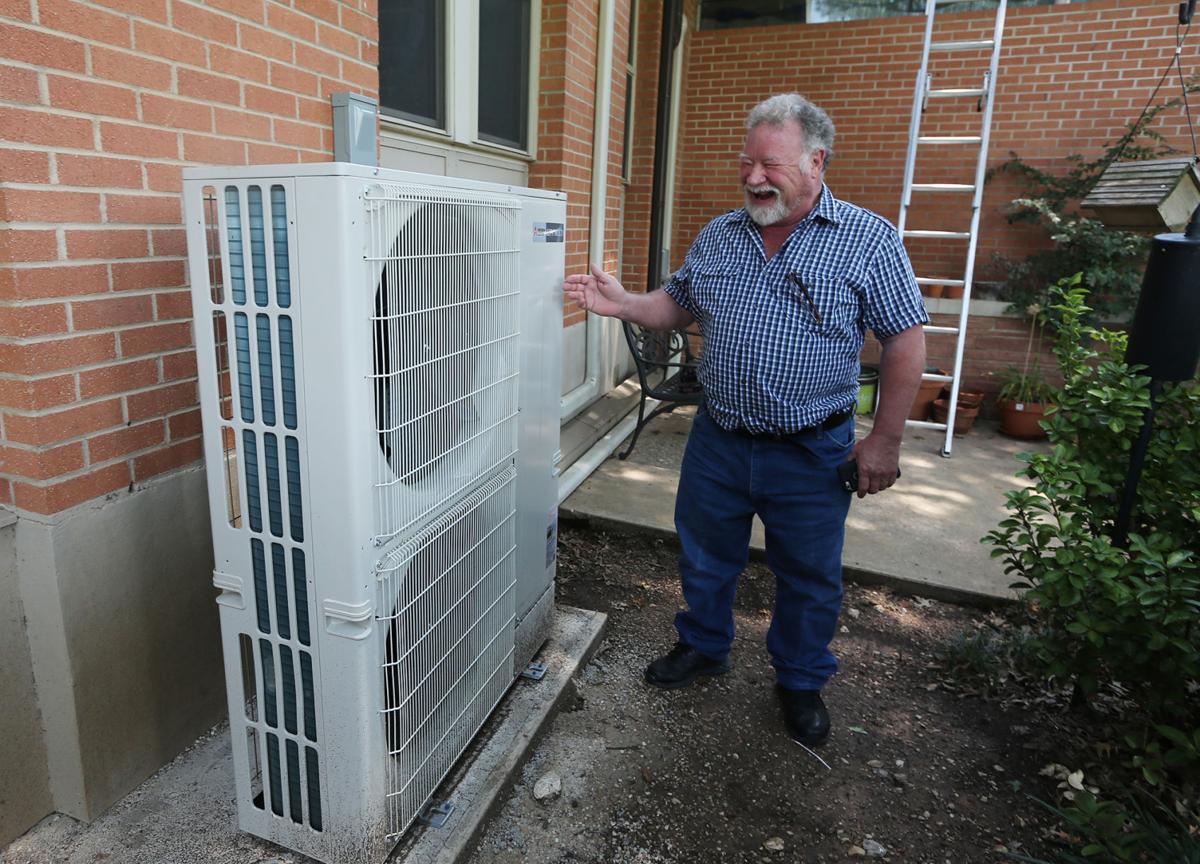 David Mosley shows off one of the new high-efficiency air-conditioning units to keep the congregation cool. 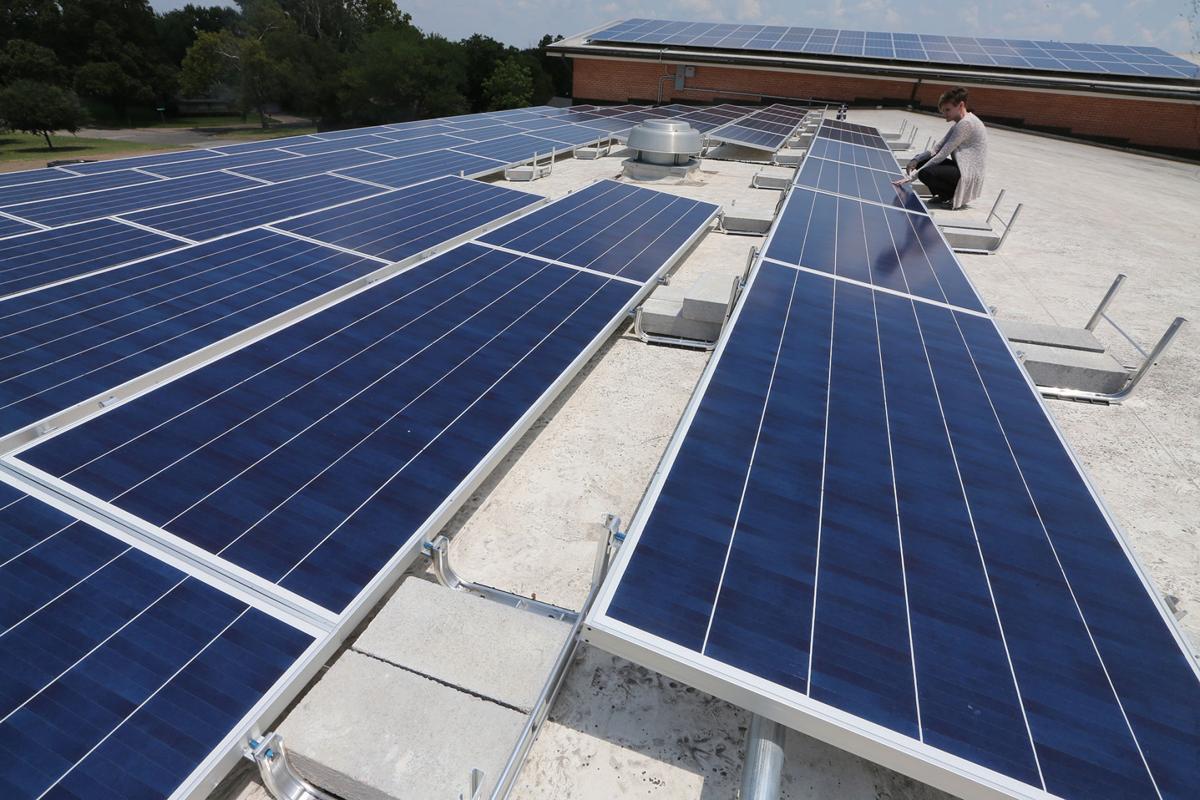 The Rev. Kyndall Rae Rothaus, of Lake Shore Baptist Church, crouches to touch one of the 140 newly installed solar panels on top of the church Friday. The church is the first in Waco to use solar panels to reduce its energy costs. 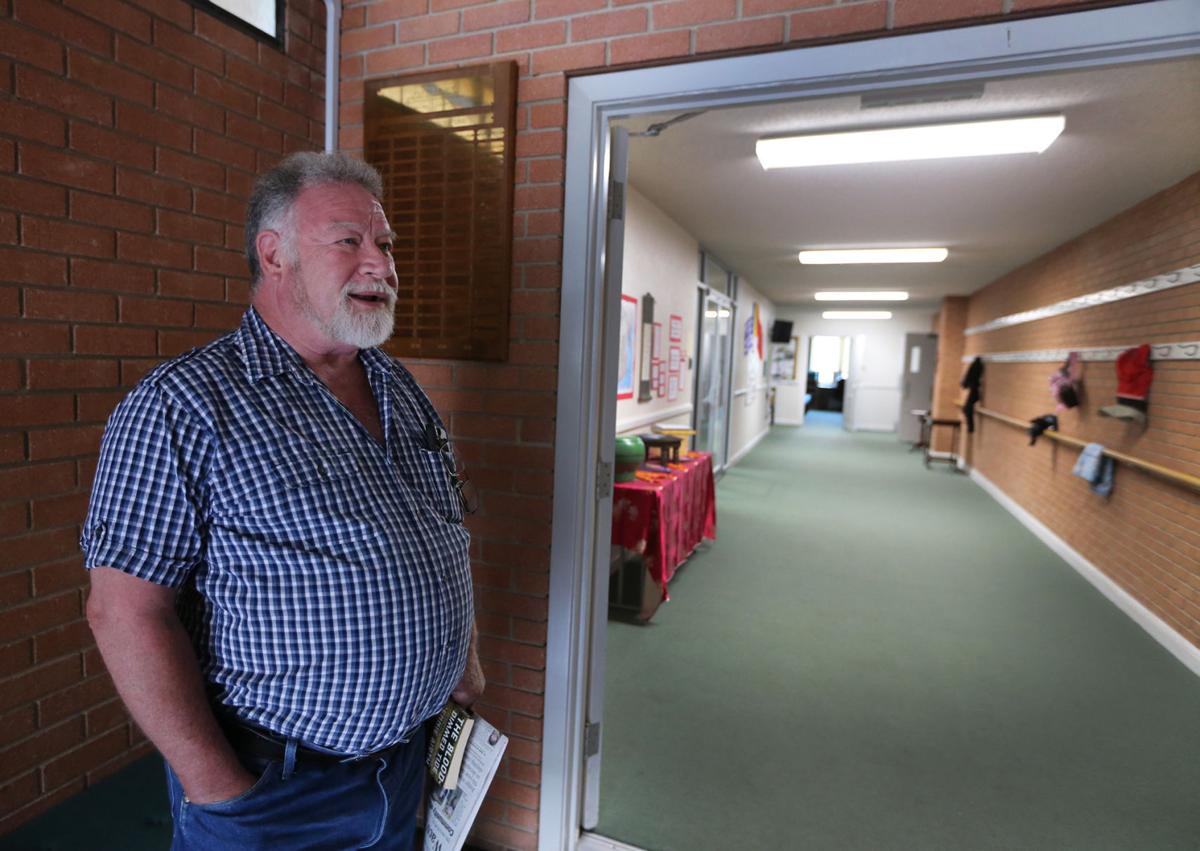 The Rev. Kyndall Rae Rothaus, of Lake Shore Baptist Church, walks between 140 newly installed solar panels on top of the church Friday. The church is the first in Waco to use solar panels to reduce its energy costs.

David Mosley shows off one of the new high-efficiency air-conditioning units to keep the congregation cool.

The Rev. Kyndall Rae Rothaus, of Lake Shore Baptist Church, crouches to touch one of the 140 newly installed solar panels on top of the church Friday. The church is the first in Waco to use solar panels to reduce its energy costs.

A local church congregation is trying to set an example for others by becoming the first in Waco to use solar panels to save money and protect the environment, Lake Shore Baptist Church officials said Friday.

Lake Shore Baptist Church’s congregation spent the past two weeks installing 140 separate panels on top of the 20th-century building, and making other energy-efficient upgrades throughout the building to bring it into the 21st century, said David Mosley, chairman of the church’s building and grounds committee.

The group committed about $180,000 to the entire project, also replacing all fluorescent lighting with LED lights and installing high-efficiency heating and cooling units to the most-used areas of the church, he said. Those areas include the front office, the daycare center and a multipurpose meeting room.

“A part of our church doing ‘the right thing’ these days is to be green,” Mosley stated in a press release. “Of course, we have to exercise wise stewardship in our efforts throughout the wider community and in reducing our carbon footprint. This project combines all of these.”

The group spent about a year and half studying the outcomes of the project before going through with it. The installation was done by the Austin-based company Freedom Solar Power, which has done about 30 major solar-panel projects throughout the state, Mosley said. He called about 10 leaders out of those 30 projects to get a better understanding of whether the installation would be worth it, he said.

The church expects to save about $6,000 a year on energy bills, because the changes will cover about 90 percent of the church’s needs for the next 25 to 35 years, Mosley said.

This will make the building last longer and what is saved will go toward Lake Shore Baptist Church’s mission, the Rev. Kyndall Rae Rothaus said.

“We’re really a service-oriented church, so there are lots of different things that money could potentially go to, which is exciting to think about,” Rothaus said. “It gives us the chance to dream a little.”

The energy project was inspired by church elders Skip and Sandy Londos and Alan Northcutt, the leader of the Waco Friends of Peace, an organization committed to climate-change activism, Mosley said. The Londos family worked closely with the group to propose the idea and start the discussion, Sandy Londos said.

The Londoses installed several solar panels on their home nine or 10 years ago, and the highest electric bill they’ve had since was about $155 at the peak of Texas heat in August, she said. They’ve been with the church for more than 40 years.

“I’m thrilled with the church going green, I really am,” Sandy Londos said. “It’s an investment in the long term. You know, I’ll probably be gone and Kyndall may be gone, but hopefully it’ll help the building and will help with posterity.”

The energy upgrades will start paying for themselves by year 16, Mosley said. But it helps that the church is expected to recoup some costs almost immediately with an energy rebate of about $28,000 from ONCOR Energy, and the resale of their previous light fixtures and two older air-conditioning units for about $2,500, Mosley stated in a release.

The church also got about $30,000 from a family who wanted to help the church kickstart the project and another $36,000 from private pledges before the project went up for an official vote by church leaders in March, Mosley stated.

“Scientists have been telling us we should be better stewards of our world for quite some time,” Rothaus stated in the release. “By taking these steps, we hope to show it is possible to ‘go green’ on a large scale — without the building collapsing.”