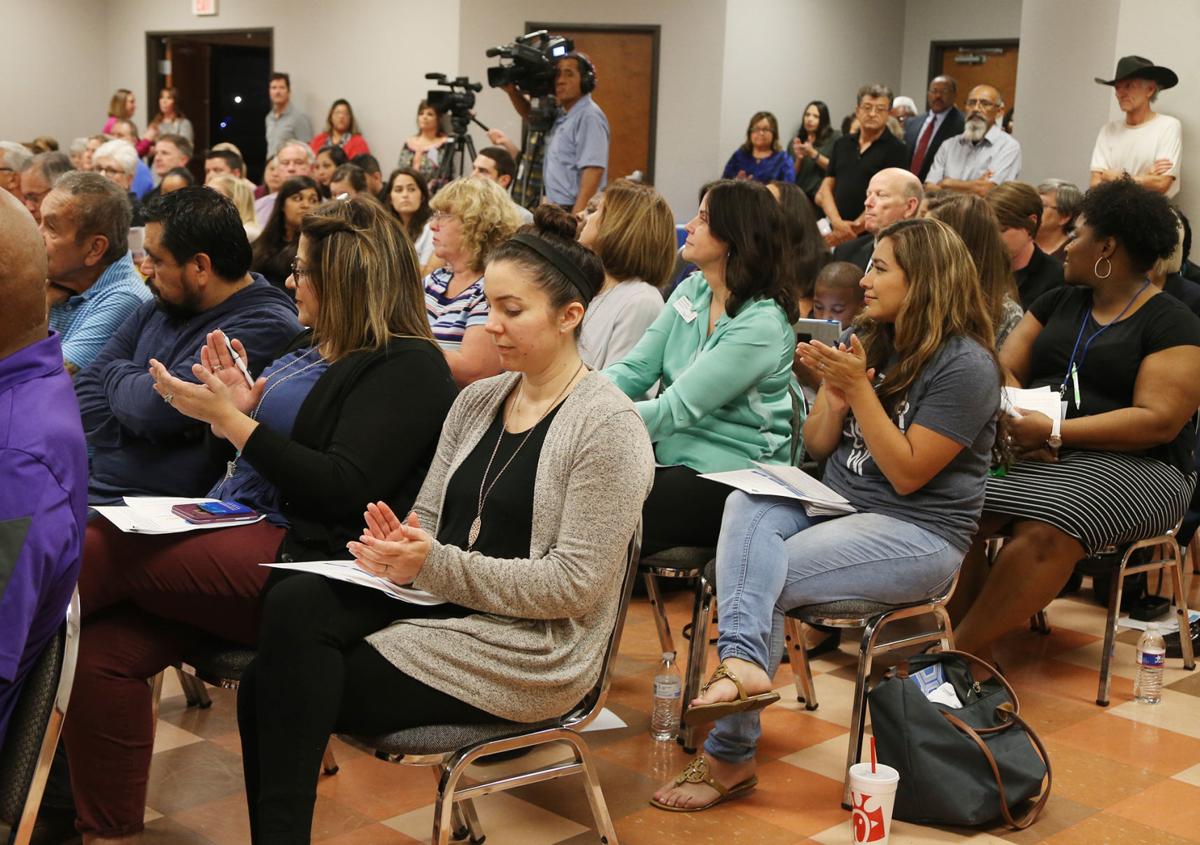 A large crowd attends the third community meeting about Waco ISD schools Monday at the Cen-Tex Hispanic Chamber of Commerce. 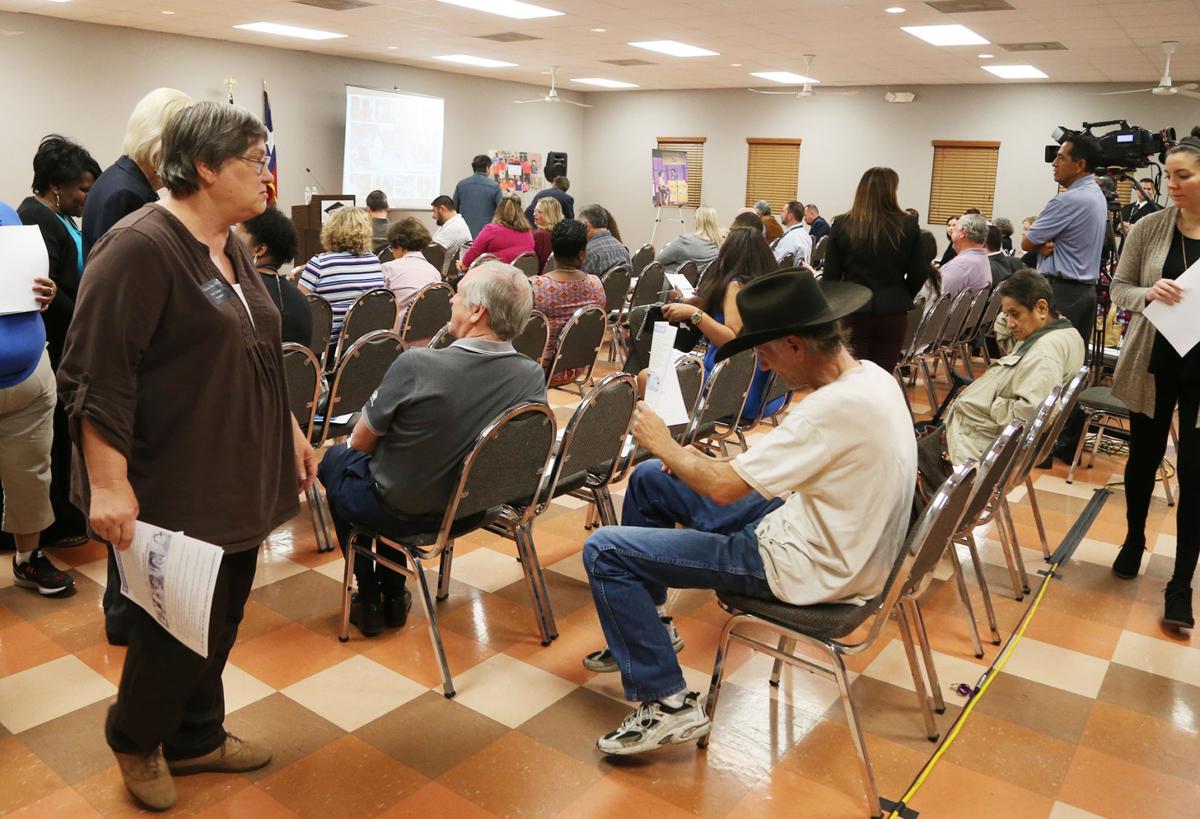 A large crowd attends the third community meeting Monday at the Cen-Tex Hispanic Chamber of Commerce to discuss alternative plans to save five Waco ISD schools on the verge of closure. 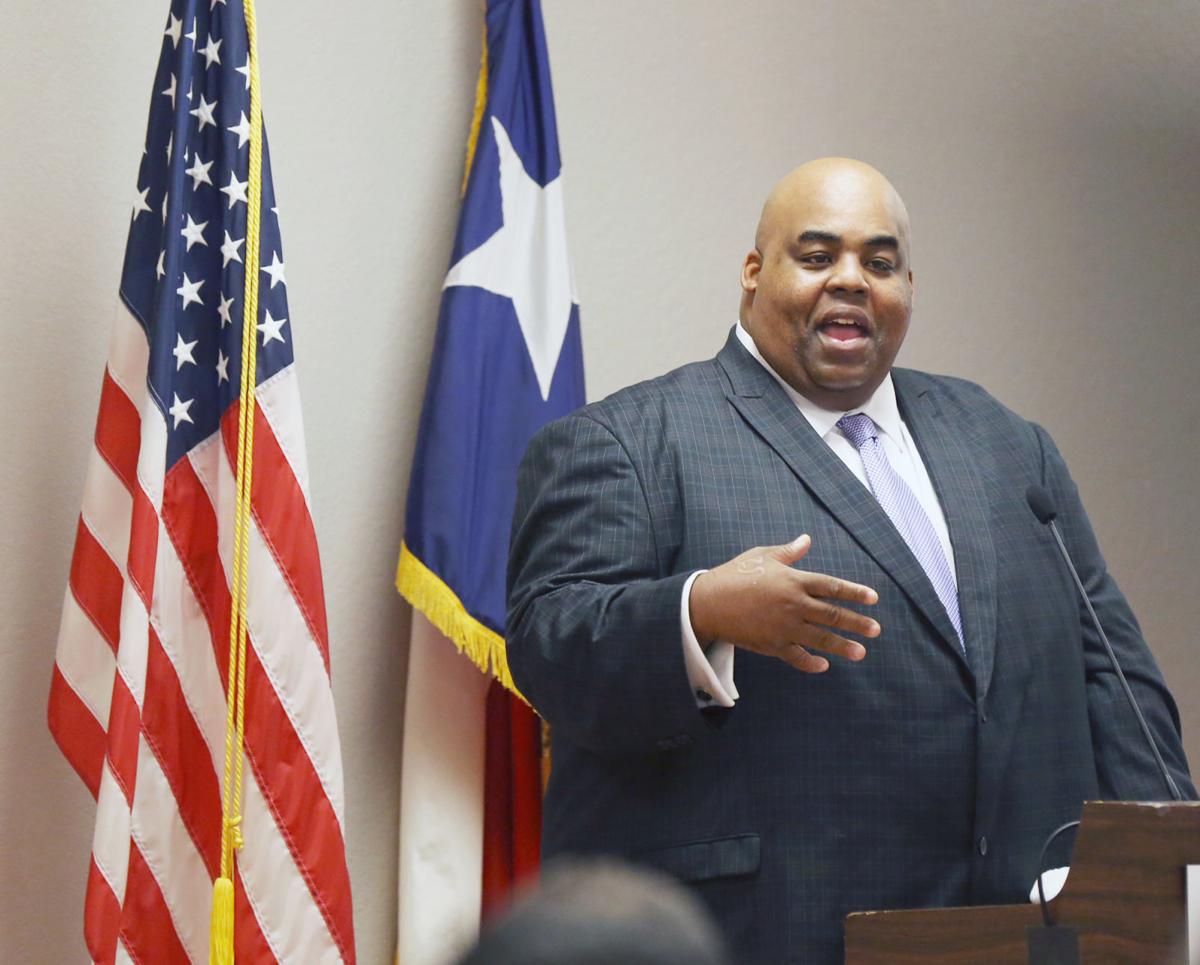 Superintendent A. Marcus Nelson begins the third meeting Monday at the Cen-Tex Hispanic Chamber of Commerce to discuss alternative plans to save five Waco ISD schools on the verge of closure. 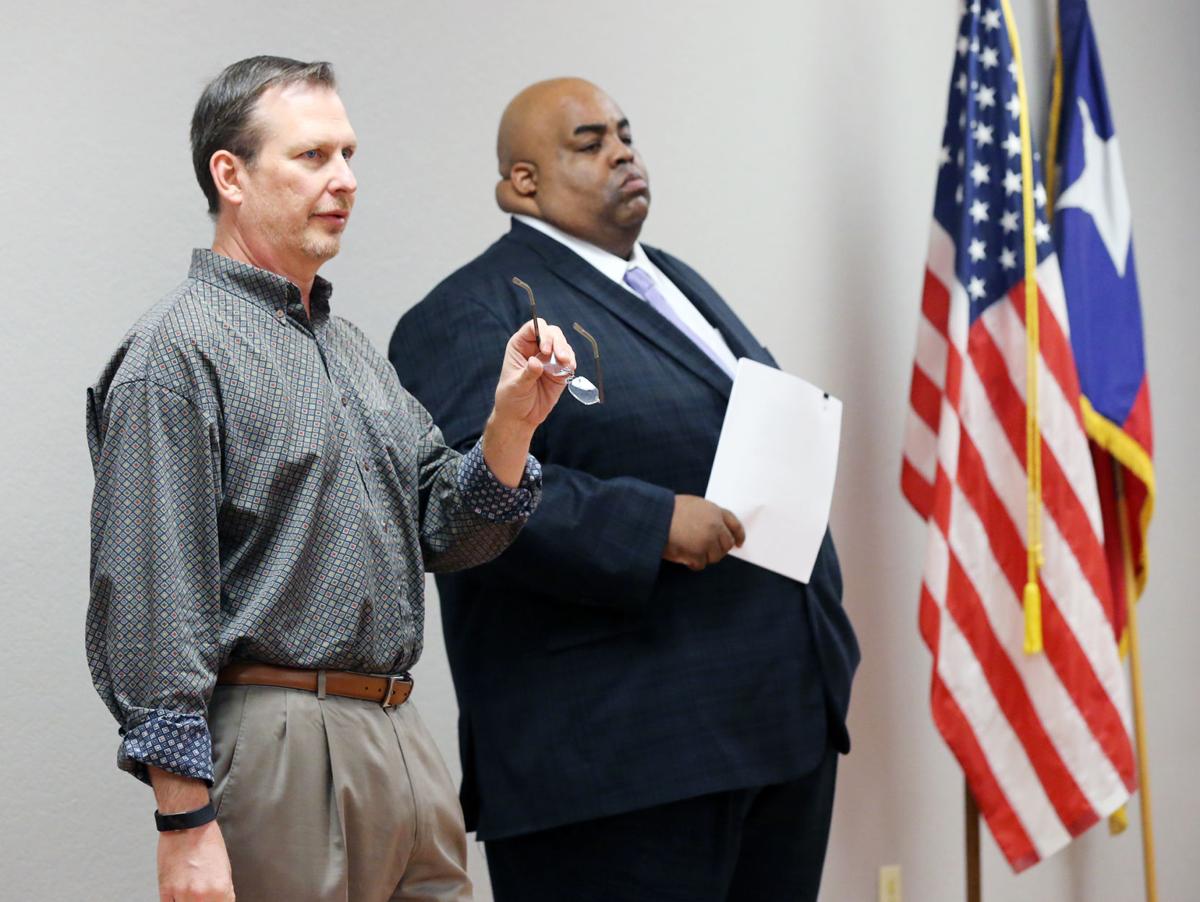 Waco ISD Board President Pat Atkins, left, and Superintendent A. Marcus Nelson, right, open the third community meeting Monday at the Cen-Tex Hispanic Chamber of Commerce to discuss alternative plans to save five Waco ISD schools on the verge of closure.

A large crowd attends the third community meeting about Waco ISD schools Monday at the Cen-Tex Hispanic Chamber of Commerce.

A large crowd attends the third community meeting Monday at the Cen-Tex Hispanic Chamber of Commerce to discuss alternative plans to save five Waco ISD schools on the verge of closure.

Superintendent A. Marcus Nelson begins the third meeting Monday at the Cen-Tex Hispanic Chamber of Commerce to discuss alternative plans to save five Waco ISD schools on the verge of closure.

Waco ISD Board President Pat Atkins, left, and Superintendent A. Marcus Nelson, right, open the third community meeting Monday at the Cen-Tex Hispanic Chamber of Commerce to discuss alternative plans to save five Waco ISD schools on the verge of closure.

As Superintendent A. Marcus Nelson started his last of three community meetings about contingency plans for five schools on the verge of closure, he dove into deeper details about what realigning campuses or nonprofit partnerships could look like if the schools don’t pass state standards again in May.

He reiterated the options under state law for a third time Monday at the Cen-Tex Hispanic Chamber of Commerce, and focused on what’s next for his administration and the Waco ISD school board between now and January.

“We want to be emphatically clear, there’s a change coming to Waco ISD and it is intended to improve the organization,” Nelson said. “No matter what school we have in our organization, all of our schools can do better. With these rising levels of accountability coming from the Texas Education Agency, urban school districts are going to have to be more fierce in our expectations and how we go about doing our business, but we’re not going to be able to do it alone.”

If the five schools don’t meet state accountability ratings in May, a 2015 law requires the campuses to close or the district’s elected school board to be replaced with state appointees. Again, Nelson said, Texas Education Agency officials told the district replacing the school board isn’t an option because the board is considered one of the top in the state. The district received the application for an alternative plan last week and administrators are looking over the application process, he said.

But a law passed this year gives districts a chance to come up with an alternative plan to keep the schools open another two years if approved by the state.

“They’re going to have to take these schools out of my dead, cold hands,” Nelson told a full crowd.

Waco ISD must come up with a plan for the school board to approve in January and submit to the state in February. If it doesn’t, the state will take it to mean Waco ISD isn’t proactively pursuing changes. Under the new law, Waco ISD can repurpose schools with a new campus ID number, effectively making them new schools, create partnerships with a for-profit charter school or create a partnership with a nonprofit group, Nelson said.

But Nelson has already said surrendering to a for-profit charter school system wasn’t an option, so the other options have included repurposing campuses.

“I’m looking at the community of Waco, and I’m like, ‘Do you understand how unacceptable it would be in Waco ISD if we just closed two middle schools next fall?’ ” Nelson said. “Where are they going to go? What the state of Texas wants me to do is put them on buses and send them to Tennyson (Middle School) and put portables up and send them to Tennyson.

In his first two meetings, he presented the initial idea of considering making both middle schools single-gender campuses, creating a sixth-grade center. But after community feedback, he said the district might be hesitant to pursue the option.

Nelson said he would give single-gender campuses 24 months to improve before possibly considering another change, but emphasized any plan the district goes with to change campuses would be a plan that would show improvement.

Bryan Dalco, pastor of One Fellowship United Methodist Church and volunteer at South Waco Elementary encouraged residents to take action in their schools on a regular basis. He also asked several questions on behalf of South Waco residents about the possible realignment plan, including why his campus was part of the discussion when it’s considered successful by the state.

“I challenge everyone here to not just show up to these meetings, but to be actively engaged in these schools,” Dalco said. “They really need you there. ... Everybody needs to be there. This is Waco’s problem, not just the school board’s and not just the superintendent’s problem.”

Nelson responded by saying South Waco would be involved in the realignment because its location would allow for a central location for help from nonprofits and to avoid the possibility of busing students across Interstate 35.

As for nonprofits, Nelson said he believes Waco has several viable options that could help the district accomplish its goals, including the United Way of Waco-McLennan County, Prosper Waco and others.

“I really don’t know how we’ll do this planning with a nonprofit, and then dealing with it once our schools make it. I haven’t got that far yet,” Nelson said. “But I know right now we spend every day working in our campuses as if our schools are going to make it. It’s just the administration at the senior level that’s working on some of these contingency plans in the event we don’t.”

Realistically, the effort would take the collaborative work of many organizations to support students and family, Prosper Waco Executive Director Matthew Polk stated in an email to the Tribune-Herald on Friday. If Prosper Waco is asked to formally partner with Waco ISD to help operate the campuses, the collaborative nonprofit would do so as a backbone organization that helps pull resources together in innovative ways, Polk stated.

“A significant part of the Prosper Waco effort over the last three years has been to partner with and support Waco ISD (and other local districts) in improving education outcomes for Waco kids. Our board has told Dr. Nelson that we’re ready to step up that partnership however needed to serve students on the campuses that could be closed if they fail to meet state standards this school year,” Polk wrote.

From here, discussion about an alternative plan for the five campuses will be on every school board agenda between now and January before the board makes a final decision, Nelson said. District officials will also reach out to transformation committee members for feedback.

Waco ISD is also pushing for more family engagement focused on improving literacy gaps at all levels, the district’s biggest challenge going into 2020, Nelson said last week. The district will host a literacy night 6 p.m. Tuesday at Waco High and University High for parents from feeder elementary schools to learn how they can help their children at home.

The next school board meeting is scheduled for 6 p.m. Nov. 16 at the at the Waco ISD Conference Center, 115 S. Fifth St.

“I knew what I signed up for, and I want this for Waco. I want Waco to want this as bad as I want this for us,” Nelson said. “I want us to boldly proclaim in the same newspaper that puts on the front page, ‘Closure looms,’ ‘Sky’s falling,’ – I want that same newspaper to put, ‘Oh my, they made it.’ Our principals and teachers will tell you, our kids understand this, and our kids want their schools to stay open. We need to help them. We need to help them accomplish that task.”