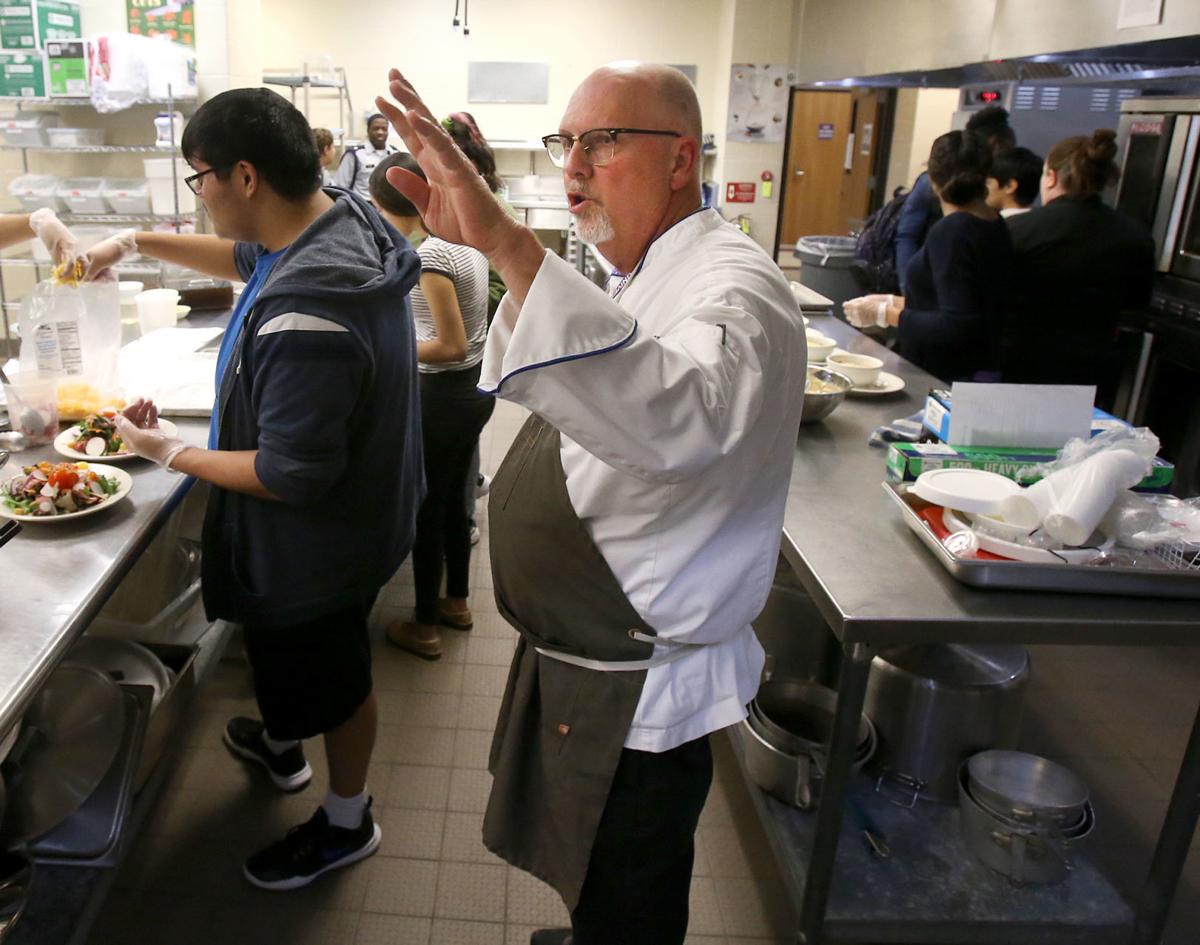 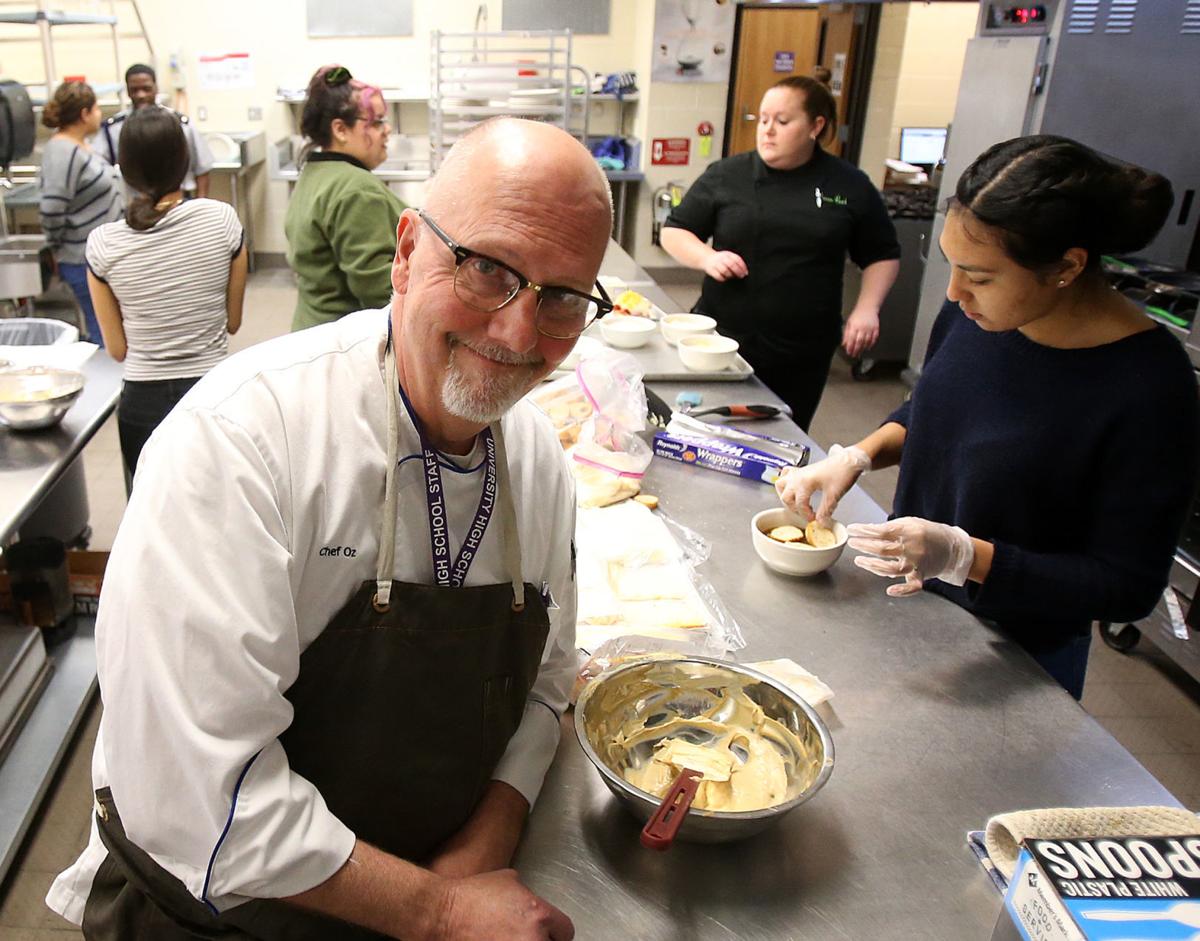 University High School culinary teacher and chef Michael Osborne spent more than 30 years in the restaurant business before uncovering a desire to mentor chefs-in-training while he attended the Culinary Institute of America in New York in his 50s. 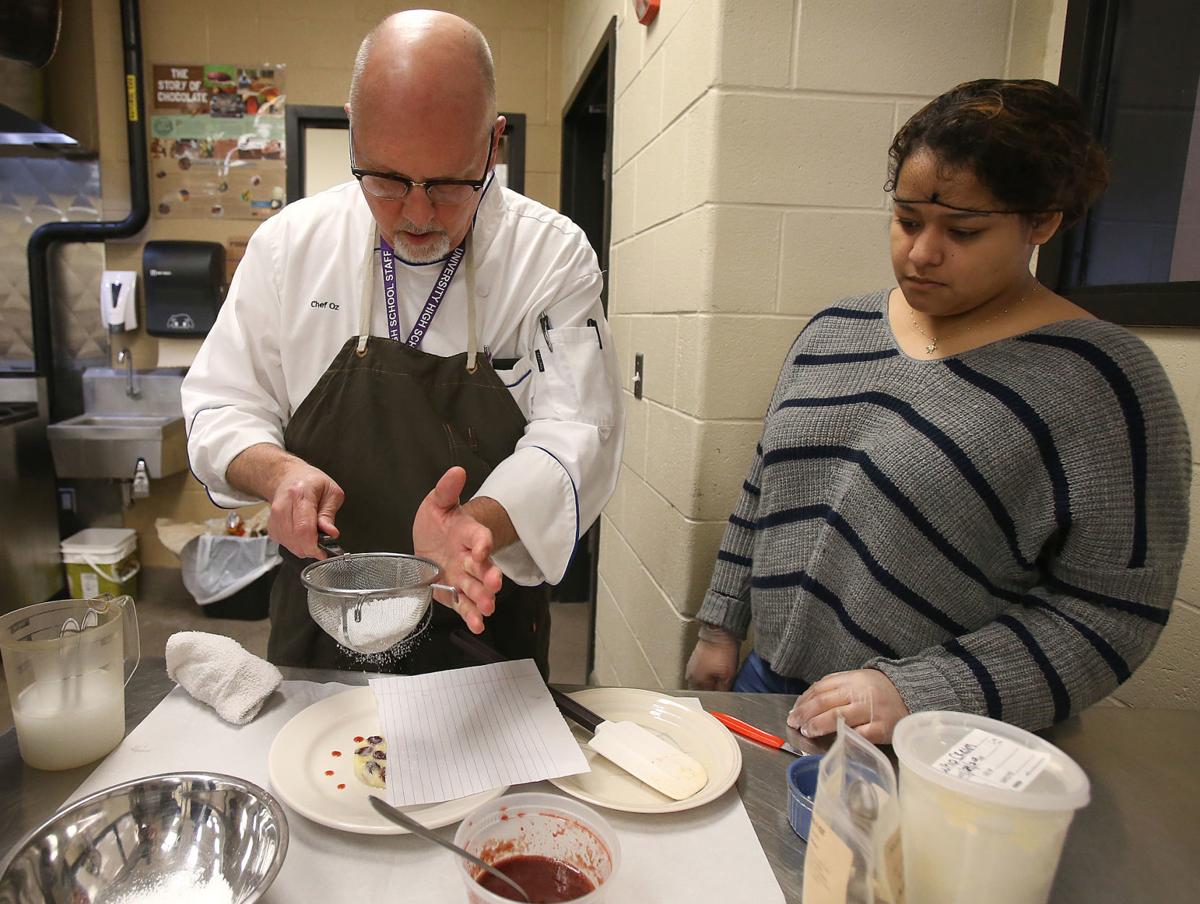 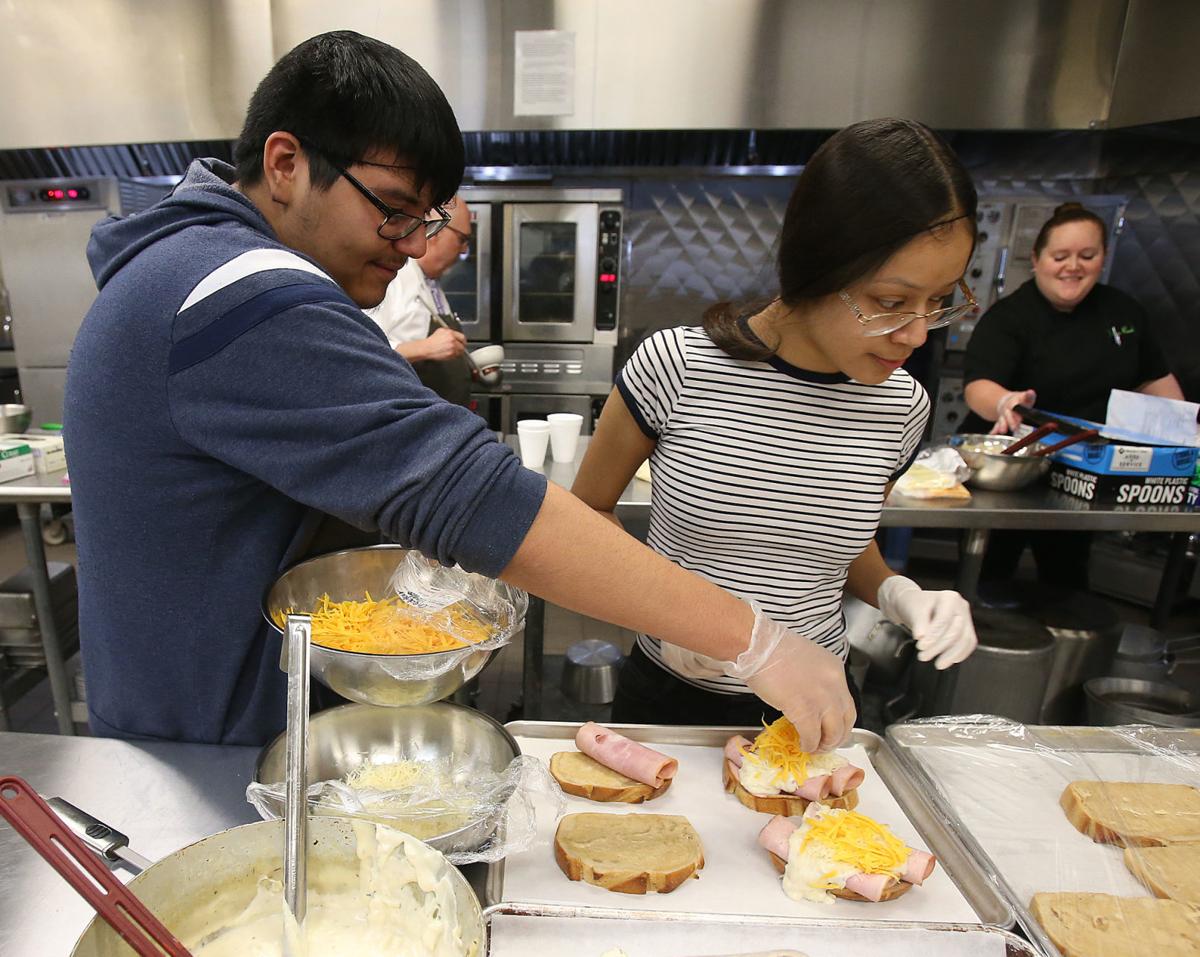 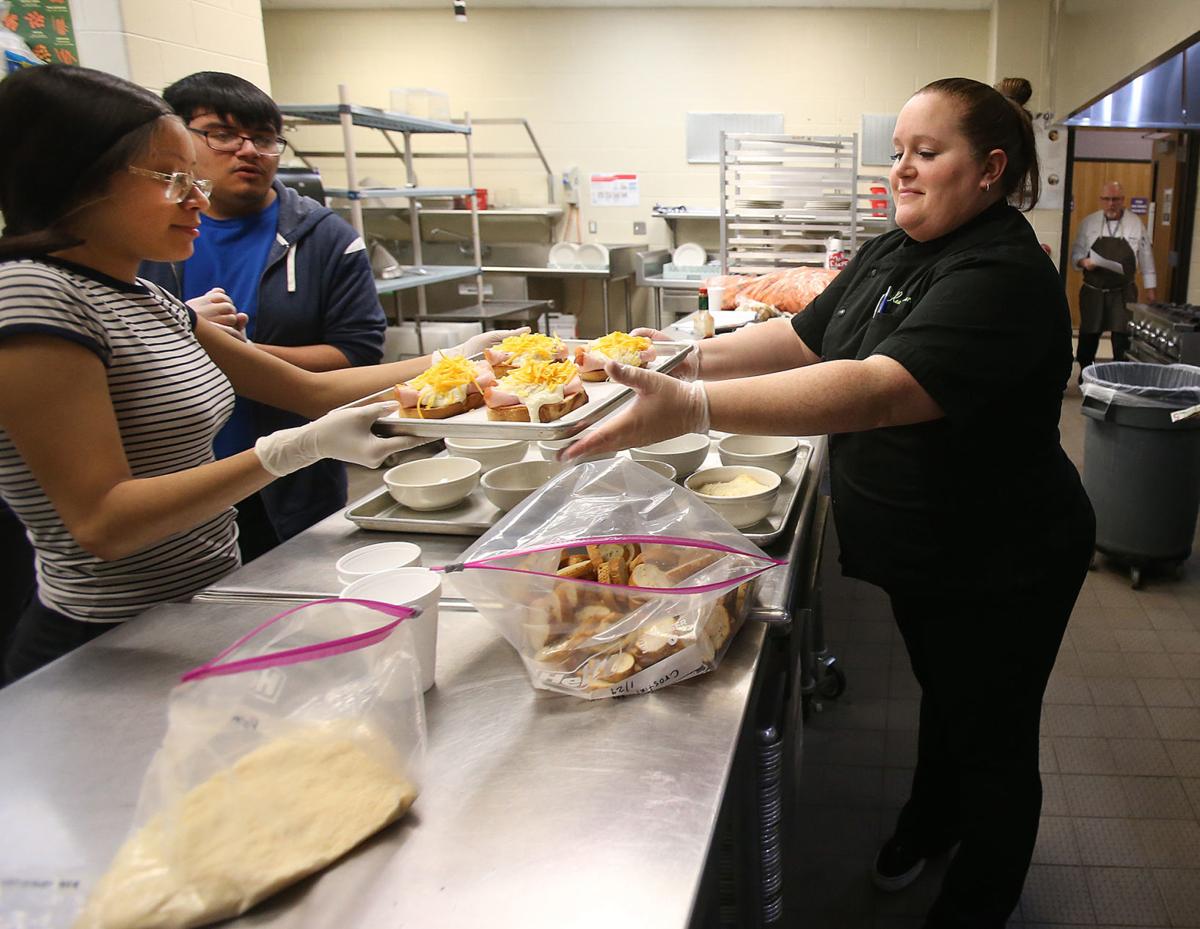 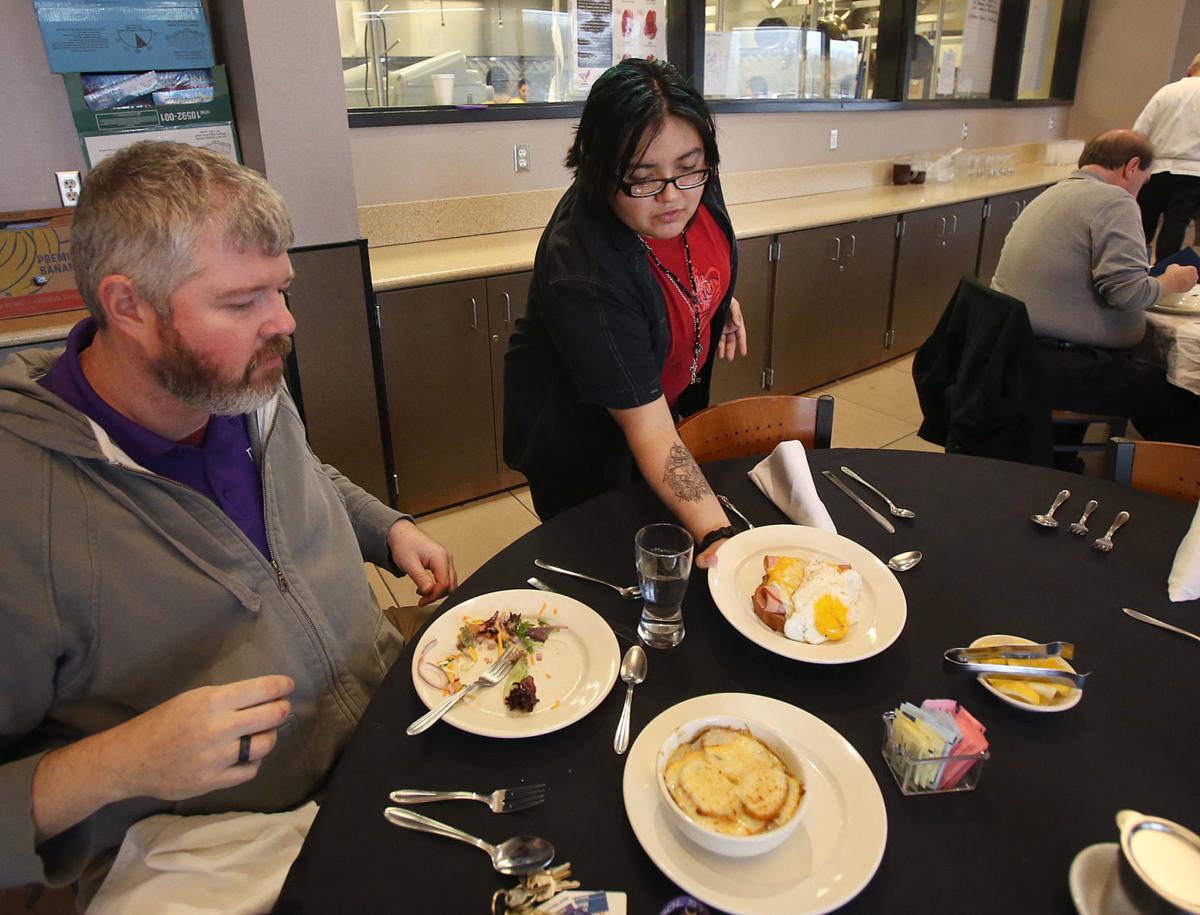 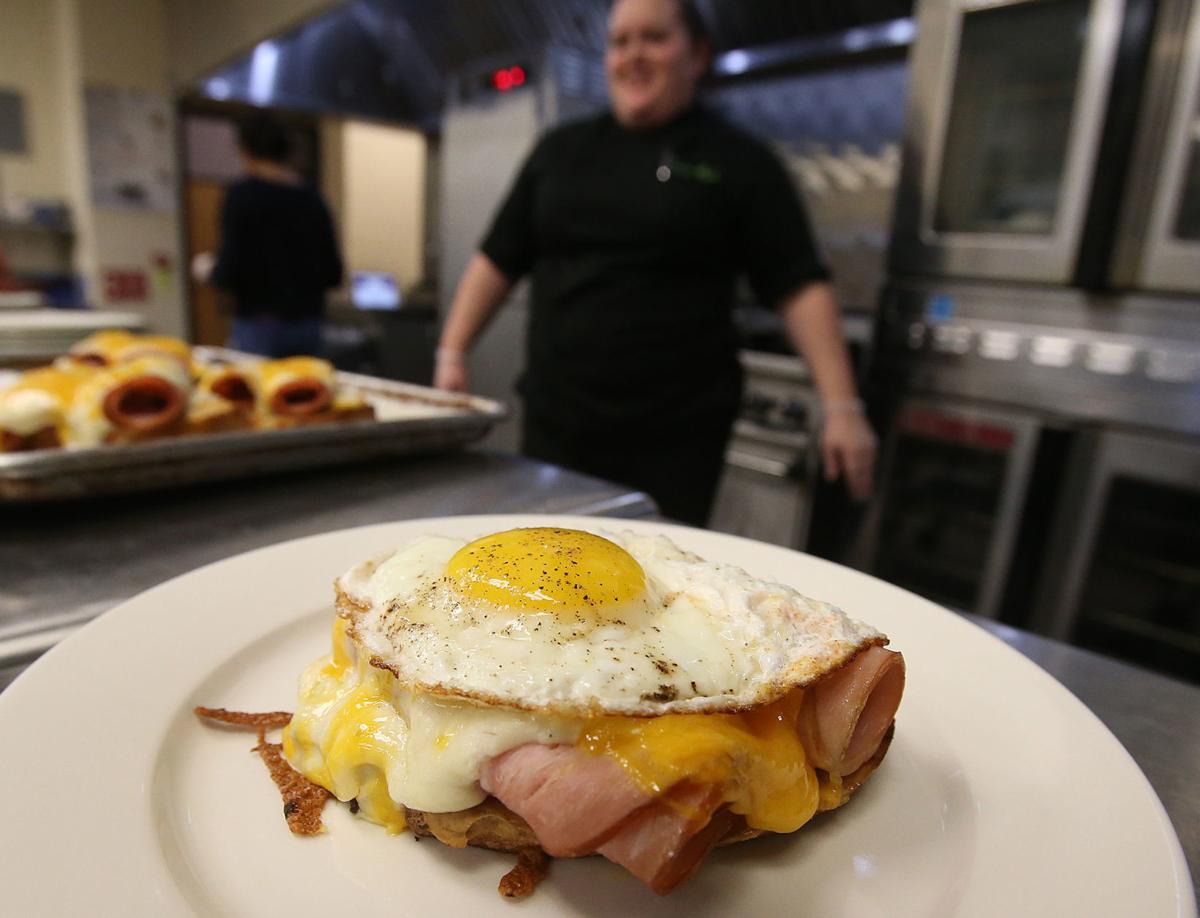 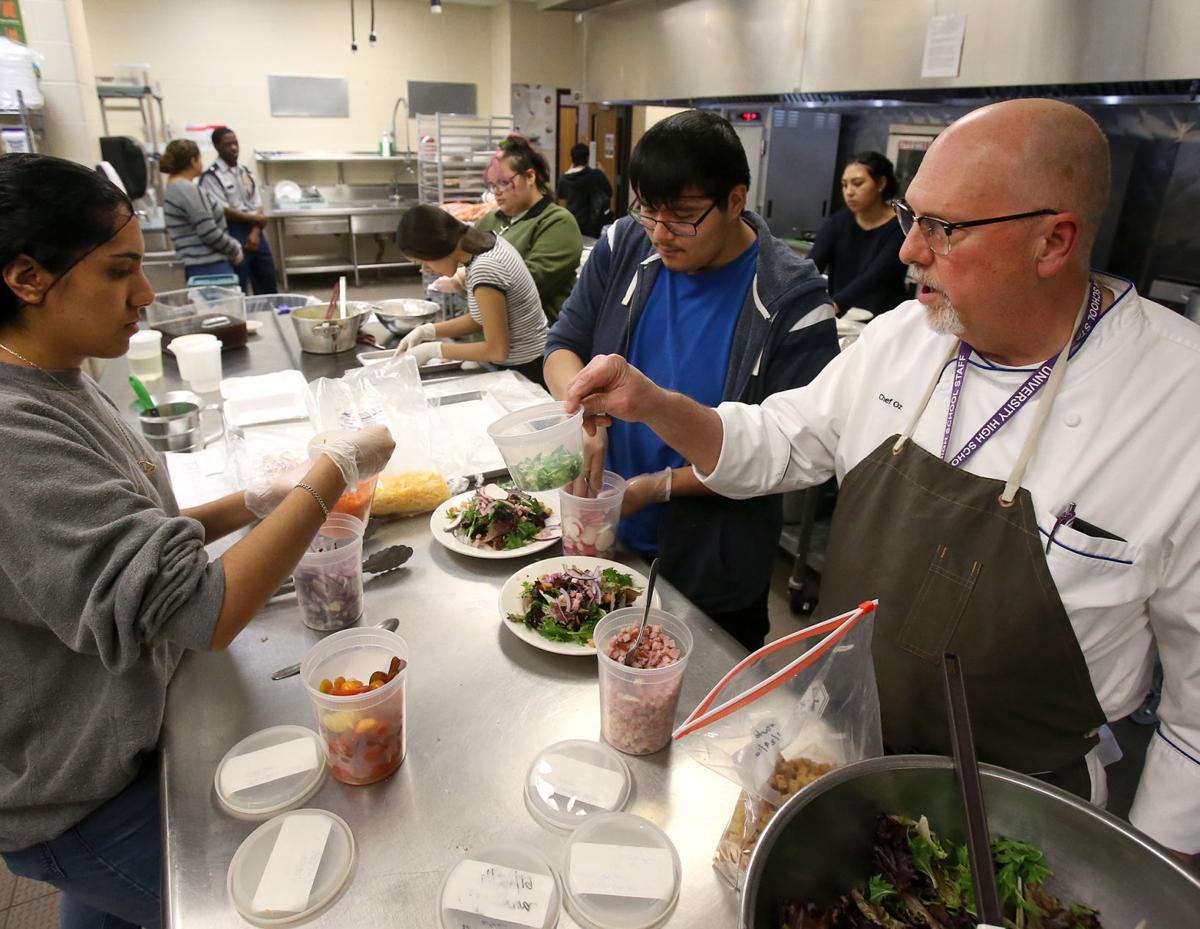 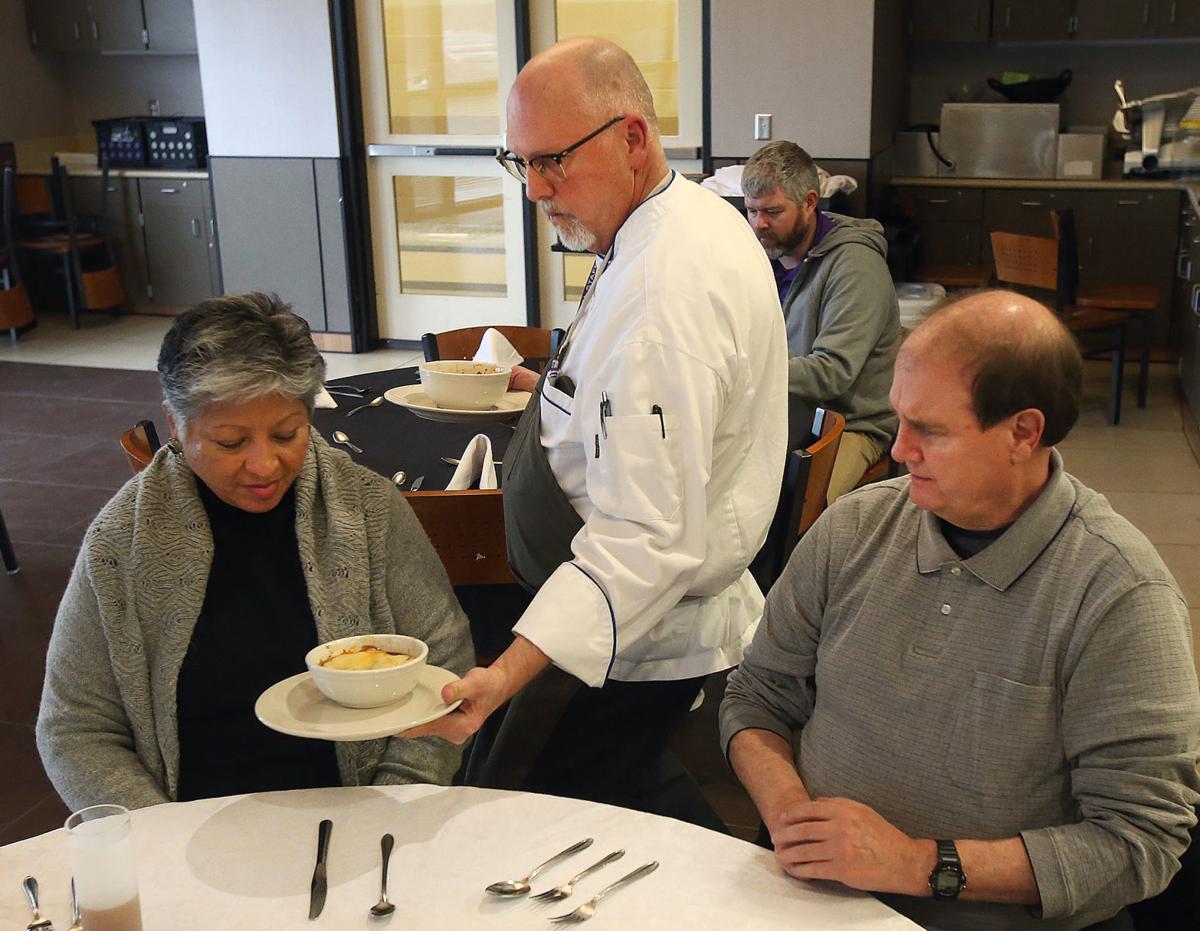 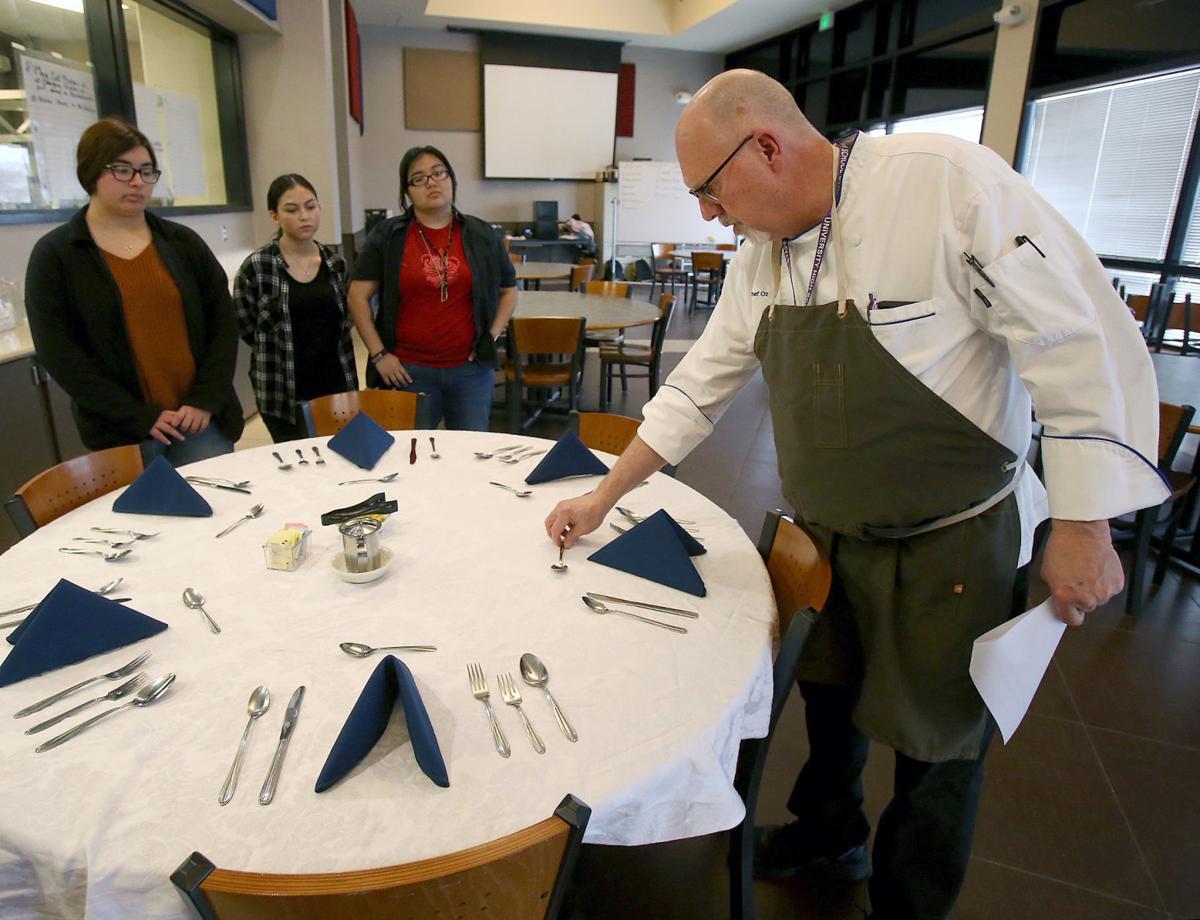 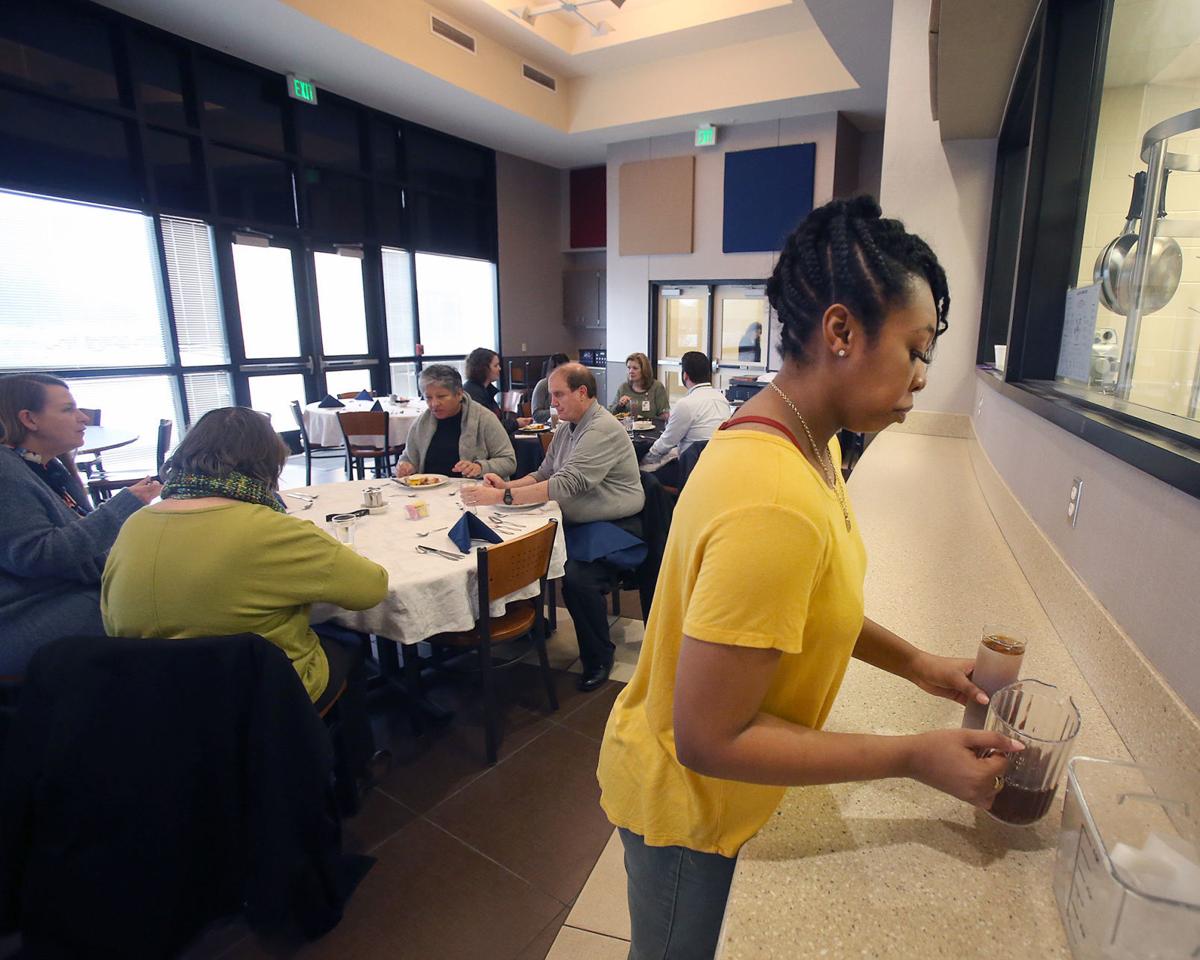 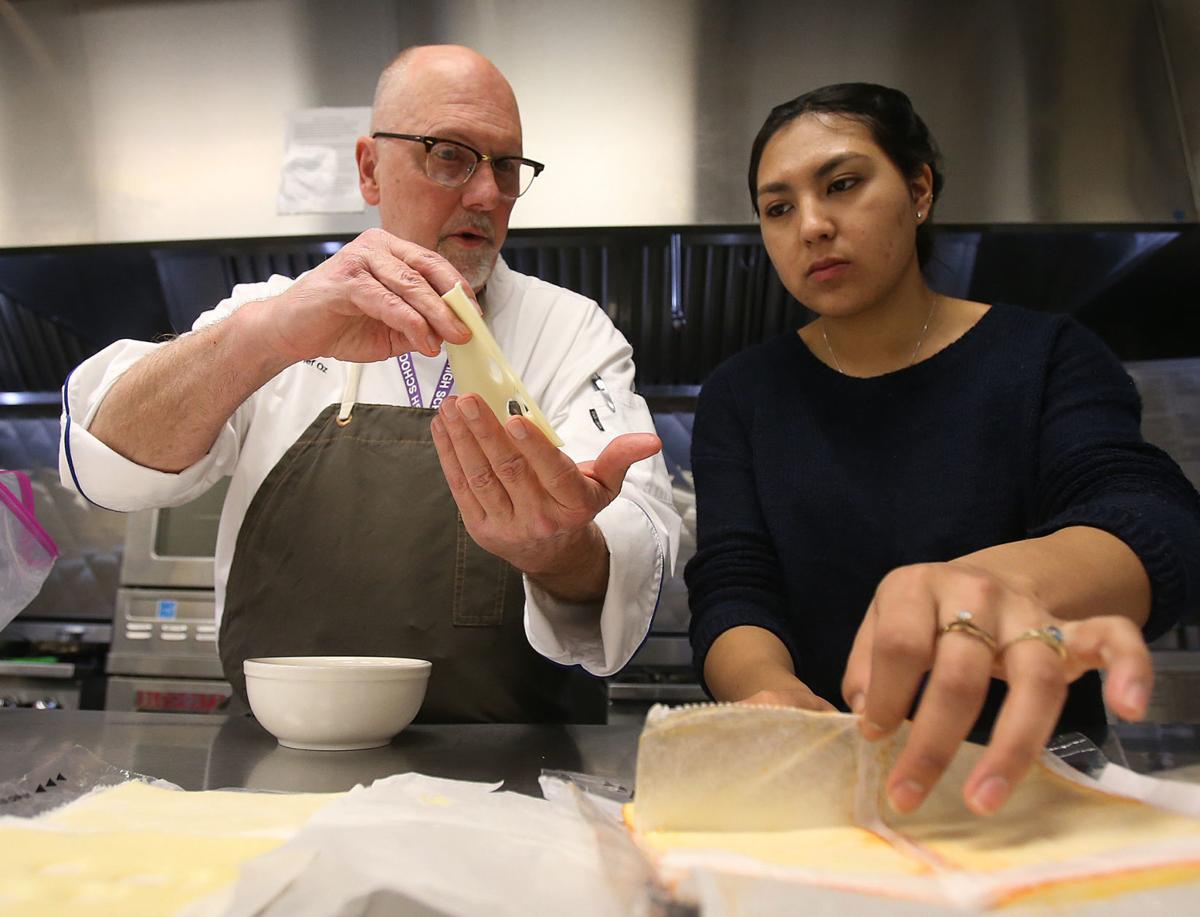 University High School culinary teacher and chef Michael Osborne spent more than 30 years in the restaurant business before uncovering a desire to mentor chefs-in-training while he attended the Culinary Institute of America in New York in his 50s.

Shouts of “Chef!” ricocheted off the stainless steel appliances in University High School’s Academy of Culinary Arts kitchen on a Thursday afternoon, as dozens of students prepared a four-course French meal for the class’ bimonthly cafe day.

Chef Michael Osborne responded to each student by name, answering their queries quickly but patiently, as if they really were working in a restaurant kitchen on a busy night, not a high school class in the middle of the day.

The students displayed no horse play. Their hands in clear, plastic gloves, they focused on the tasks before them, whether they were preparing the salad, French onion soup gratinee, croque madame sandwich or the cherry clafoutis, a classic French dessert.

On the other side of the large windows in the kitchen, Waco Independent School District administrators sat at circular tables covered in white tablecloths, as other students carried out the various dishes and refilled glasses of iced tea and water.

Osborne emerged from the kitchen to check on the lunch guests. Did they like the soup? How was the sandwich? He quietly instructed a student to serve a guest from the left before moving on to the next student, never quite standing still.

In 2016, Osborne and Chef Reannon Ruark joined the staff of University High School after district Career and Technical Education Director Donna McKethan and her staff decided the program needed to be refined, with a focus on the culinary arts instead of general hospitality. She knew the students needed to learn from professional chefs to be successful in the culinary field.

“Now, students are being exposed to things they never would have been exposed to before,” McKethan said.

In the Academy of Culinary Arts, students can take up to four courses that range from an introduction to culinary arts to a practicum class in which they cook and serve lunch almost every week, work catering events and prepare meals for the Salvation Army. The goal is to give students “real world experience” so they can decide if they want to pursue a career in culinary arts, McKethan said.

“In a career and technology program, the goal is to find out what you want to be or what you don’t want to be,” she said.

McKethan knows the students are in good hands with “Chef Oz,” as the students refer to Osborne, and that it benefits them to receive instruction from the same teacher each year as they progress in the program to maintain a continuity of learning.

Osborne, a self-taught chef, worked in the restaurant business for more than 30 years before he attended the Culinary Institute of America in New York in his 50s, where he earned a bachelor’s degree in restaurant management. He worked for a while at a club in New York and spent a year in Los Angeles. In 2013, he returned to Waco to teach at Texas State Technical College, and now at 65, he is passing down his knowledge to high school students.

In culinary school, Osborne realized he wanted to help mold and mentor the younger students who embraced the older man in class, so he felt ready to move to the college and high school level when the opportunities arose. Plus, he said, he would rather test recipes with high school students than work 80-hour weeks and handle the “brutal workloads” executive chefs must deal with daily.

“We try to get them exposed to various types of regional cooking,” he said. “It’s amazing to me how well these kids can do. They can crank out some amazing stuff.”

His students enjoy the class, even the students who have no plans to pursue a culinary career. Their laughter and the clanging of dishes echoed in the small kitchen as they cleaned up Thursday afternoon.

For senior Dazha Stewart, the class will help her as she pursues a degree in health and nutrition upon graduation. She and her classmate Bianca Rivera enjoy the experience of learning new things, although Rivera plans to have a career in the catering business. Despite their different directions after high school, the program has benefited both.

To reserve a seat at the school’s bimonthly cafe days, visit www.wacoisd.org/Page/10574. Each cafe day menu has a regional cuisine theme. The next cafe day is 11 a.m. to 12:40 p.m. Thursday, and the students will prepare Cuban cuisine.