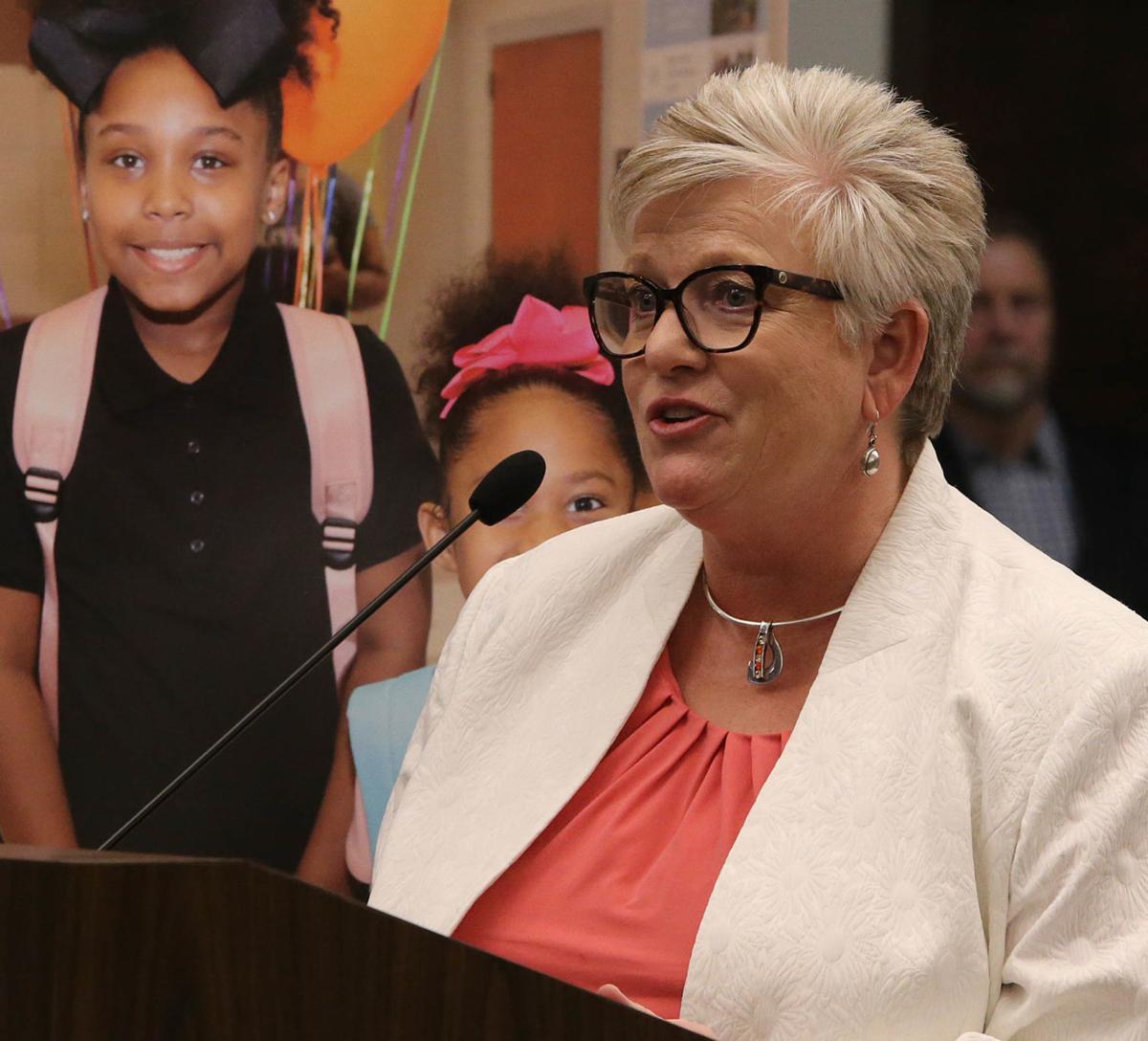 New Waco ISD Superintendent Susan Kincannon addresses the school board Thursday. The board hired Kincannon in a 5-2 vote. 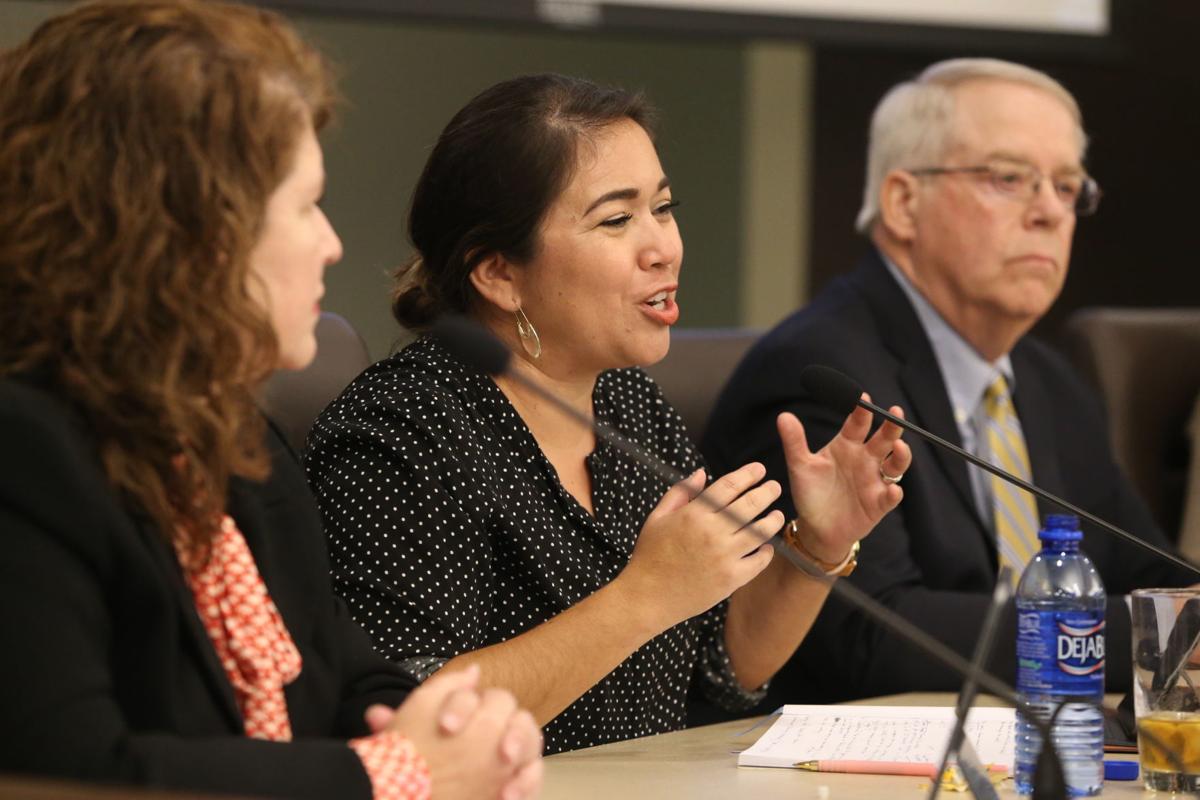 Waco ISD board member Stephanie Korteweg addresses new Superintendent Susan Kincannon during the meeting. Korteweg voted against hiring Kincannon but said she will support her fully in the new role. 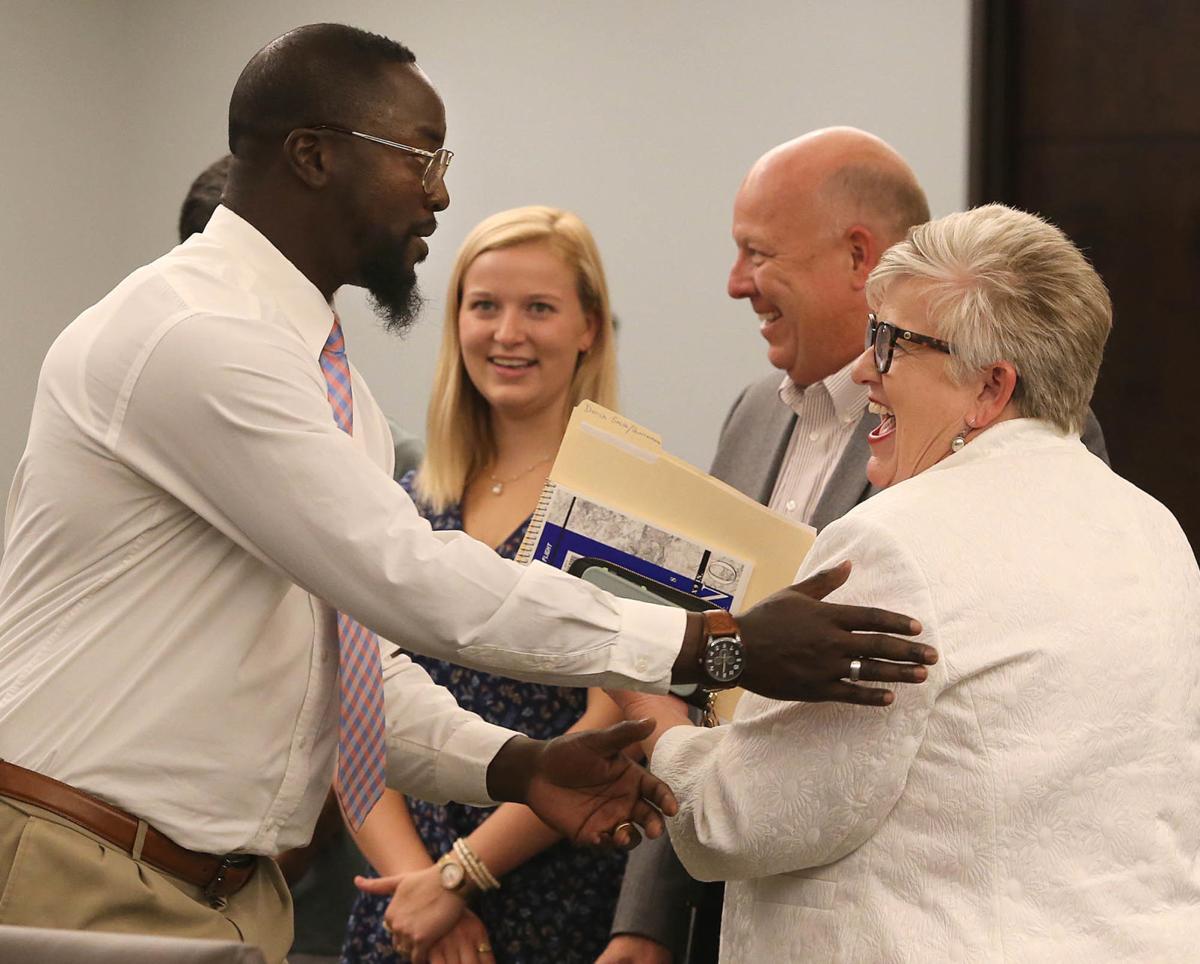 The Waco Independent School District Board of Trustees voted 5-2 Thursday to hire Susan Kincannon as superintendent, snagging her away from the nearby and fast-growing Belton ISD.

Trustees Norman Manning and Stephanie Korteweg cast the dissenting votes. Manning said in his comments before the vote that Kincannon is not the right person for Waco ISD and referred to his previous comments in the Tribune-Herald in which he expressed concern about Kincannon’s lack of experience with a student population as diverse as Waco’s.

Kincannon said after the meeting that she is excited about the opportunity to serve the students and families of Waco ISD.

“I was ready for a change, ready for a new challenge, and I’m ready for some professional growth,” she said of wanting to come to Waco from Belton. “I’m really excited to do it here in Waco ISD.”

She said she wants to spend the next three weeks on campuses, walking the hallways and getting to know students, teachers and facilities. She also want to sit down with each principal and have a conversation about their needs and formulate a plan based on discussions with the staff.

Before the vote, board President Angela Tekell took the opportunity to publicly address her professional and personal relationships with Kincannon. She said she has known Kincannon for 12 years, since Tekell began working at Belton ISD as their attorney, and the two developed a lasting friendship.

“That relationship has given me an opportunity to get to know her, to get to know her work and most importantly, to get to know her why. Dr. Kincannon became an educator because of the difference public education made in her life,” Tekell said. “There’s more than meets the eye. Over the last week especially, assumptions have been made about who this woman is based on how she looks and where she comes from, and I think we’ve all experienced times in our lives when people have either underestimated us or people have attributed certain thoughts or biases to us that were not fair, that we didn’t personally experience and that were hurtful.”

Tekell said she did not recuse herself from the vote after discussing that possibility with board members. She went on to tell a story about how Kincannon was placed in foster care at age 3 and did not realize her love of learning until her fourth grade teacher took an interest in her. That is why Kincannon became a teacher, Tekell said, because she wanted to instill a love of learning in every student.

Board member Allen Sykes agreed with Tekell that Kincannon has the skill set to lead Waco ISD.

“The selection of the superintendent is the most important role of the board of trustees,” Sykes said. “My decision to support Dr. Kincannon is based on her extensive work at the highest educational and administrative levels for an extended period of time, in addition to the site visit, which validated her broad knowledge and experience with strategic planning, curriculum and instruction, as well as her personal interviews.”

Korteweg expressed concern about how the only Belton ISD school to receive a D rating from the state this year has a student population that looks a lot like Waco ISD.

Both Manning and Korteweg told the Tribune-Herald last week they worry Kincannon does not have enough experience with a student population that looks like Waco ISD’s.

Additionally, seven Waco ISD schools received an F rating from the state this year, while no Belton schools did. One Belton campus, Southwest Elementary School, received a D.

“We can’t afford to let students slip through the cracks,” Korteweg said at the meeting. “I want and hope that you prove me wrong more than anything. I will do whatever it takes to support you in this endeavor in this district because the bottom line is it’s the students that matter.”

Manning also voiced concerns over Tekell’s 11-year working history with Kincannon as Belton ISD’s school board attorney and their accompanying friendship. The Tekells and the Kincannons share ownership of a house on the Brazos River with a couple of other people. The group rents out the house on Airbnb for $295 a night, according to the website listing.

Parent of four Waco ISD students Marlon Jones said at the meeting that he has submitted a complaint to the Texas Education Agency “regarding conflict of interest with board president and incoming superintendent.”

“The concern is that there is both business and personal relationships that create a conflict of interest and, I believe, cloud judgment in making decisions,” Jones said during public comments. “My hope is that item is not simply there as a formality but that we are truly considering what really goes into making the decision to choose someone as a leader. But when you have business dealings in terms of representing a district as an attorney, when you have personal business dealings that is owning a home that is rented out as an Airbnb, those, without a doubt, cloud vision.”

Jones also said he is upset because he sat in the same boardroom at the close of last school year with many community members and talked about what they were looking for in a superintendent.

“The things that we shared are not reflective of the superintendent that has been selected,” he said.

The board voted 5-1, without Korteweg, to name Kincannon the lone finalist for superintendent Aug. 7. Manning cast the sole dissenting vote. Korteweg said she did not attend the meeting when the board named the lone finalist because she needed more time to process her choices.

When the board announced the decision at the Aug. 7 meeting, no one from the school district or board publicly brought up for discussion Tekell’s working relationship with Kincannon.

With a goal of hiring a new superintendent before the start of this school year, the board decided to open a one-month window for applications, using the Texas Association of School Boards’ Executive Search Services firm to assist with the superintendent search. Applications were due June 19. The board had five days to review 84 applications before meeting to discuss their top five candidates.

Robin Battershell, the former top administrator for the Temple and Salado school districts, will serve as interim Belton ISD superintendent, while Belton searches for a new leader, the Temple Daily Telegram reported.

At least two Waco Independent School District trustees have raised concerns about the school board’s pick for superintendent, including her ab…

Let me get this straight. WISD’s Board - in a split decision - has hired a new superintendent (Kincannon) who shares a property interest with the current Board President (Tekell), after she (Kincannon) bought the share of the property from the immediate past Board president (Atkins). Wait, wait: it gets better... Despite the entwined business interests of these three parties - that of the current Board President (Tekell), the former Board president (Atkins) and the new superintendent (Kincannon) whom they pushed to have hired - the current Board President (Tekell) refused to recuse herself from the deliberation or the vote for her (Tekell’s) dear friend, the superintendent candidate (Kincannon). All of this, despite the fact that Kincannon - a Caucasian, just like the two Board presidents - lacks experience leading a district such as Waco’s, WHILE THE CANDIDATE POOL CONTAINED A HIGHLY EXPERIENCED PERSON OF COLOR WHO POSSESSES such experience? Have we lost our ability to call out corruption when it stares us in the face? Good God, people. Where is the NAACP? MALDEF? LULAC? The Texas Education Agency? Every Caucasian in Waco who cares about fairness, public ethics or the law? Where are the social justice warriors of Baylor University? Oh, I suppose they concluded that having their own graduate as superintendent will lead to even more insider business, where the Board is expected to funnel additional sweetheart deals and money to the school. This is deplorable.