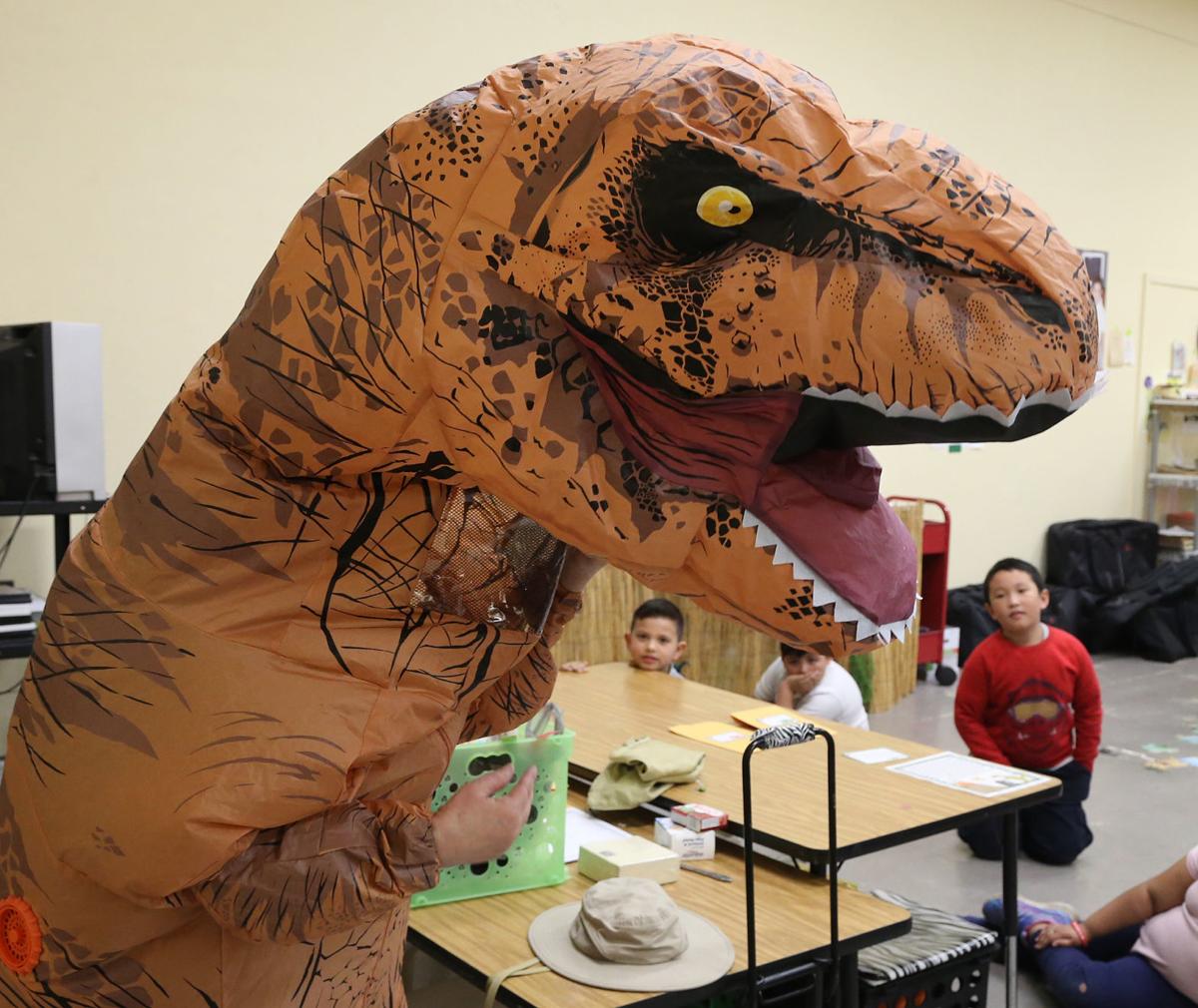 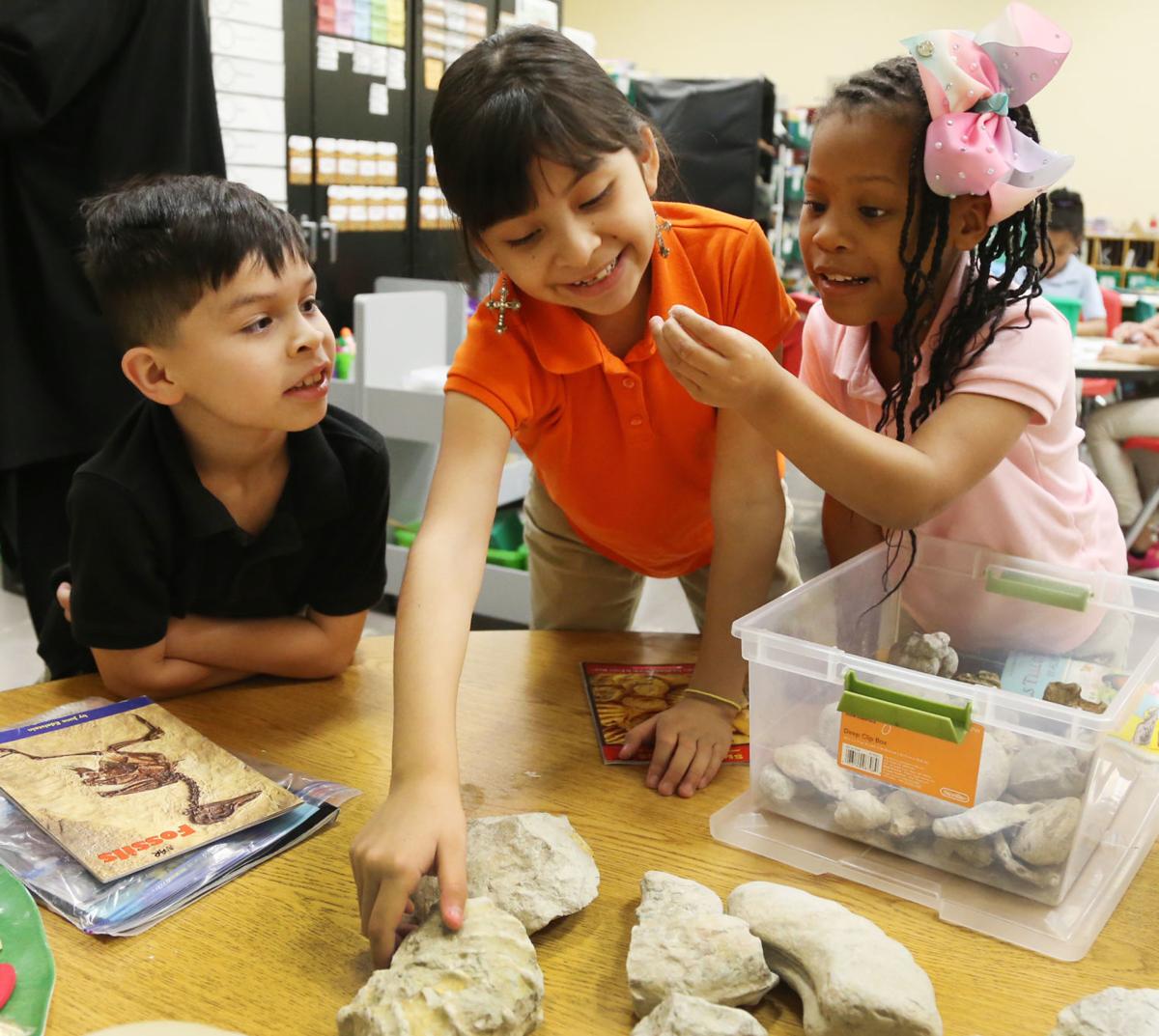 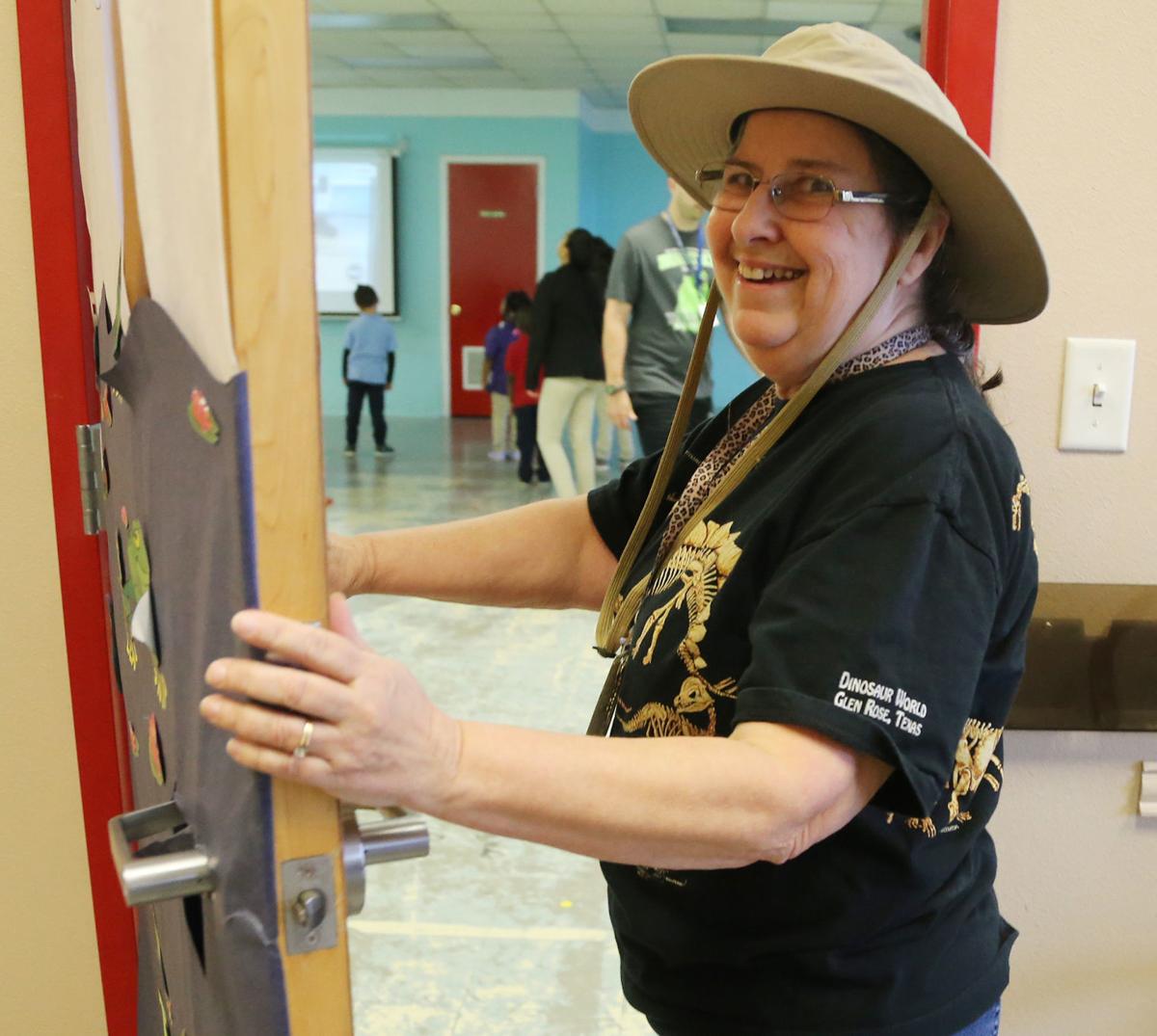 Waco Charter School second-grade teacher Janet Roller dresses as a paleontologist Tuesday for “Dinosaur Camp,” a day dedicated to all things dinosaur. Roller has been putting the camp on for eight years. 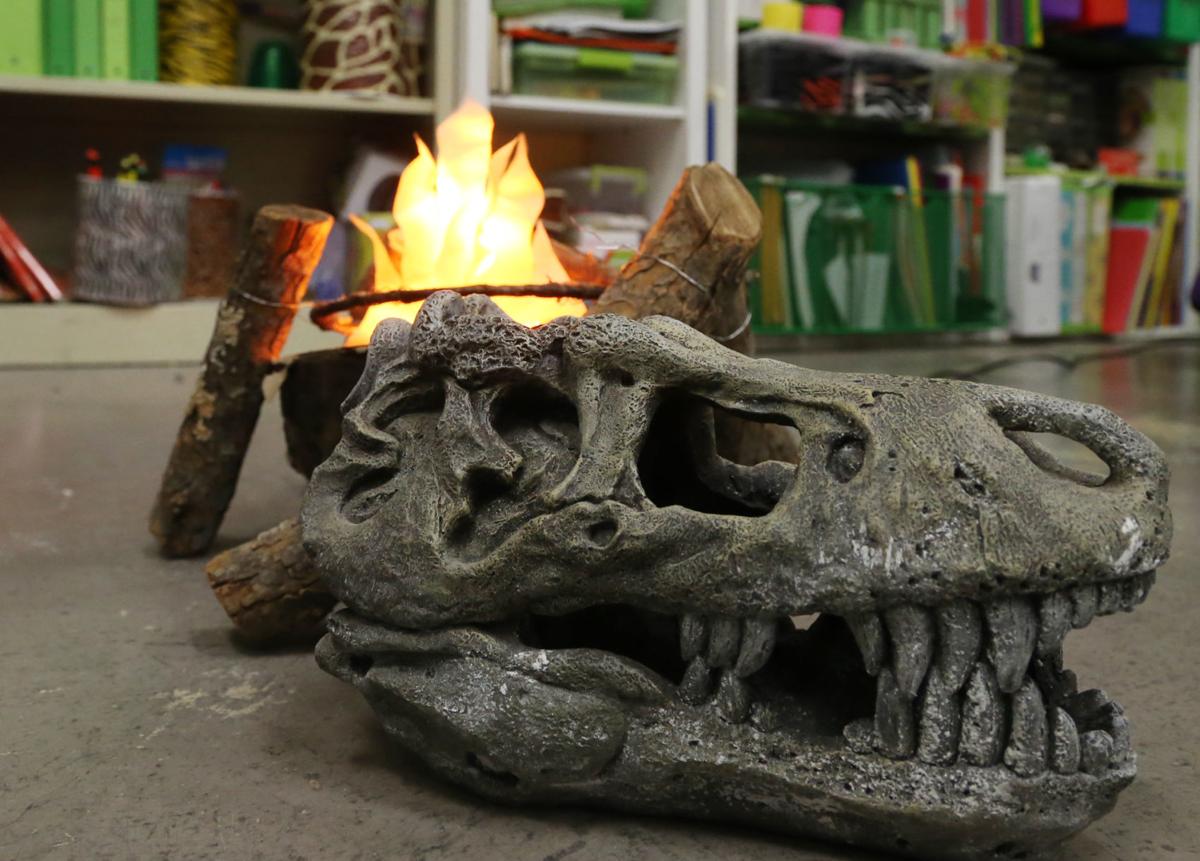 A model dinosaur skull sits next to a toy campfire Tuesday during second-grade teacher Janet Roller’s “Dinosaur Camp,” a day dedicated to learning about all things dinosaur. She has been doing the camp for eight years. 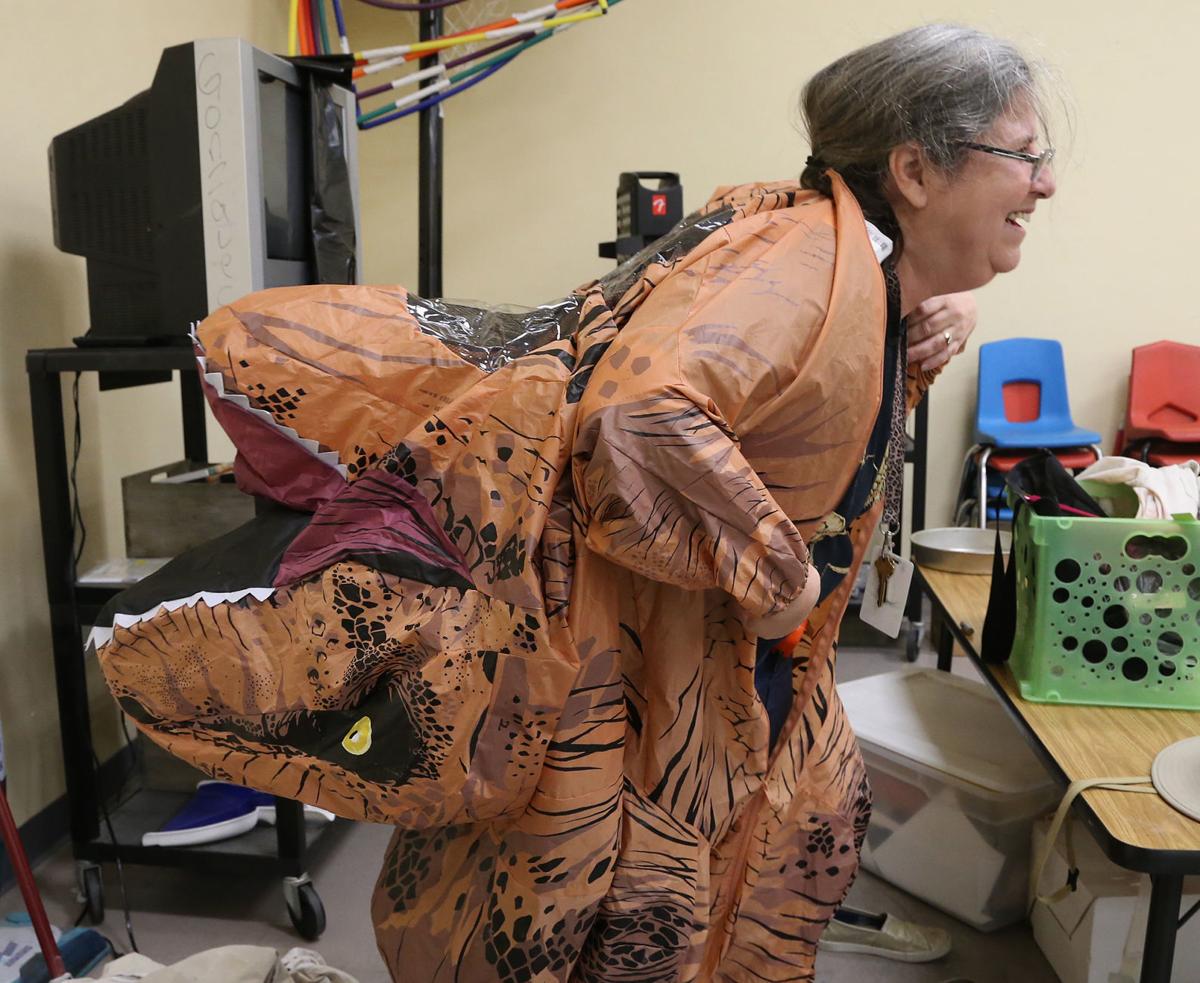 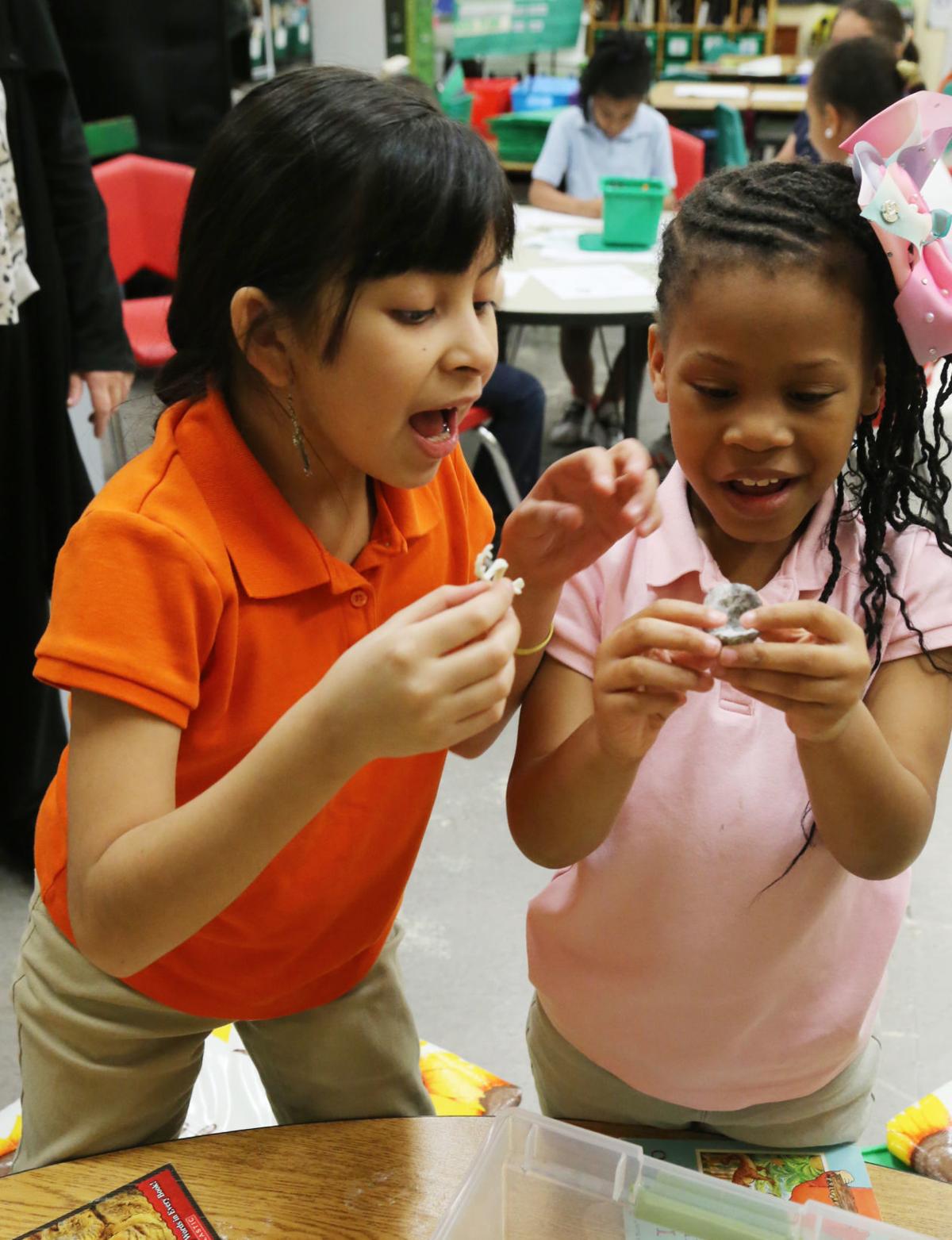 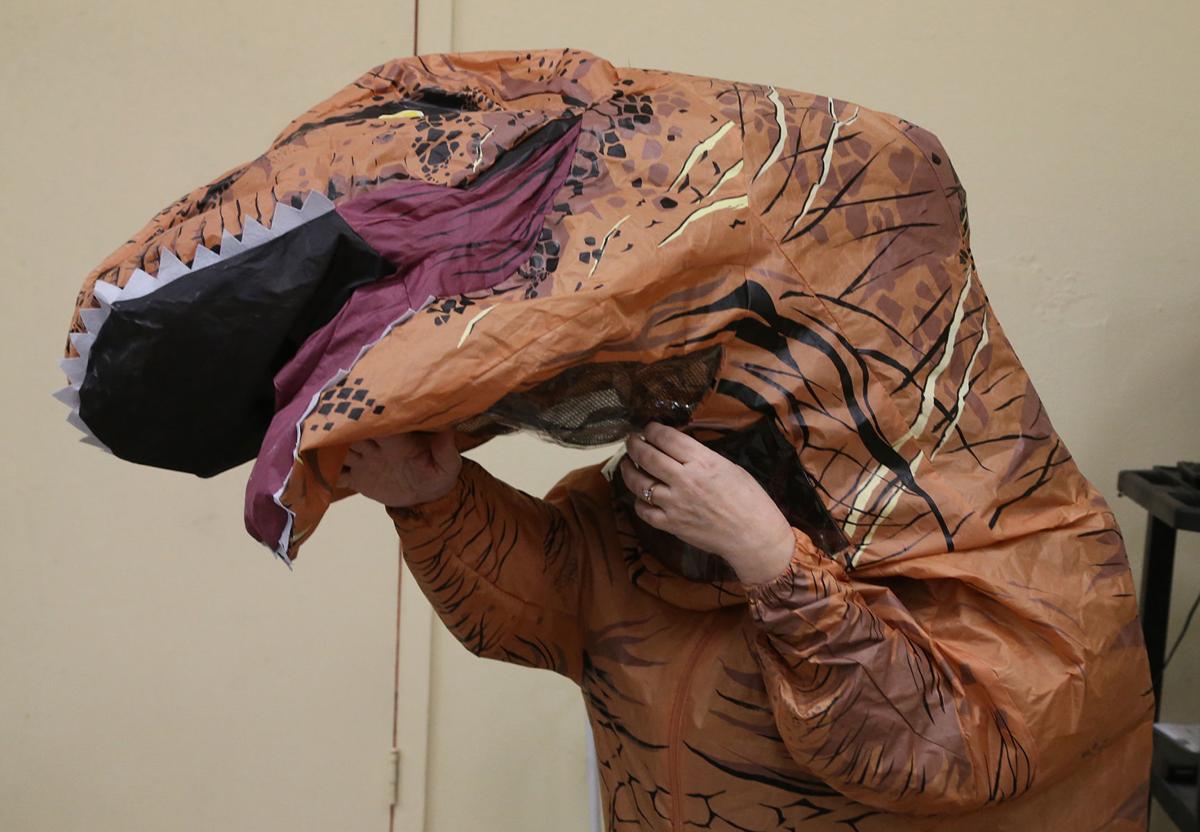 Waco Charter School second-grade teacher Janet Roller dresses as a paleontologist Tuesday for “Dinosaur Camp,” a day dedicated to all things dinosaur. Roller has been putting the camp on for eight years.

A model dinosaur skull sits next to a toy campfire Tuesday during second-grade teacher Janet Roller’s “Dinosaur Camp,” a day dedicated to learning about all things dinosaur. She has been doing the camp for eight years.

They tried to poke and prod the creature and just as they were close enough to find out whether the orange Tyrannosaurus rex was real, their teacher, Janet Roller, jumped toward them with as much of a dinosaur growl as she could muster.

For eight years, Roller has dedicated a day each year to building her own “Dinosaur Camp.” The costume has only been added within the last two years, but she often spends the day dressed as a paleontologist and sets up eight stations for two classes of second-graders to rotate through and learn about the extinct creatures from millions of years ago.

“She has it down to a science, literally,” instructional specialist Brian Howard said. “One thing I’ve noticed about Ms. Roller is she brings things to life so students can have opportunities they wouldn’t normally have.”

Roller starts each spring by putting up a small tent and toy fire in her room, because most of her students are not familiar with camping experiences, she said.

Her room, decorated with green, jungle-like backdrops and cardboard cutouts, brings the concept of a field trip indoors with hands-on lessons based on dinosaur facts, math, science and language skills, Howard said.

“It’s just fun. It’s just something they’ll remember,” Roller said. “I have fifth-graders who still come back to me and say, ‘I remember dinosaur day. I wish I could go back to it.’ ”

Most of her ideas come from Pinterest, her many trips to Dinosaur Valley State Park in Glen Rose or from the love of dinosaurs she has shared with her now fully grown daughter throughout her life, she said.

Students go from playing with dinosaur figurines once owned by her daughter to becoming young paleontologists at a small dig site for bones laid out in the middle of her classroom. They learn about fossils through board games and read about types of dinosaurs in the tent turned reading nook.

“I hope they walk away with a better understanding of how dinosaur fossils are found and what they are and how much work goes into it, not just digging them up but for them to form,” said Barbara Fuller, Roller’s fellow second-grade teacher. “Right now, they don’t really think about the times it takes — millions of years.”

There is even an Indiana Jones-like scavenger hunt based on measurement skills, with clues hidden around her room, Roller said.

And once the day is over, her students celebrate by digging into an erupting volcano chocolate cake, she said. The next day, her students will write an essay about their adventure, she said.

“It helps education come to life. It helps the lessons move from the textbook to reality,” Howard said. “Really, it just gives them the experience they otherwise wouldn’t have. The words coming from the teacher’s mouth don’t always materialize into something real, whereas they do on days like this.”