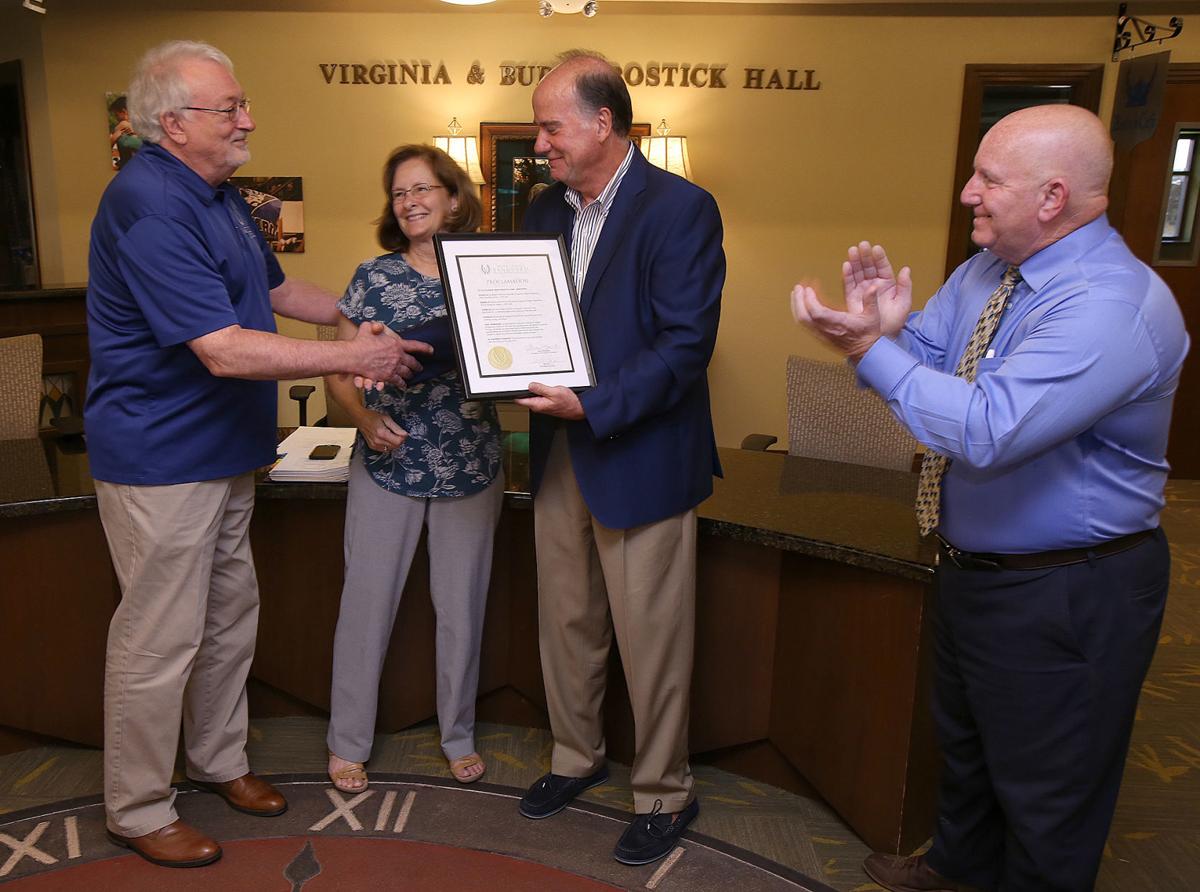 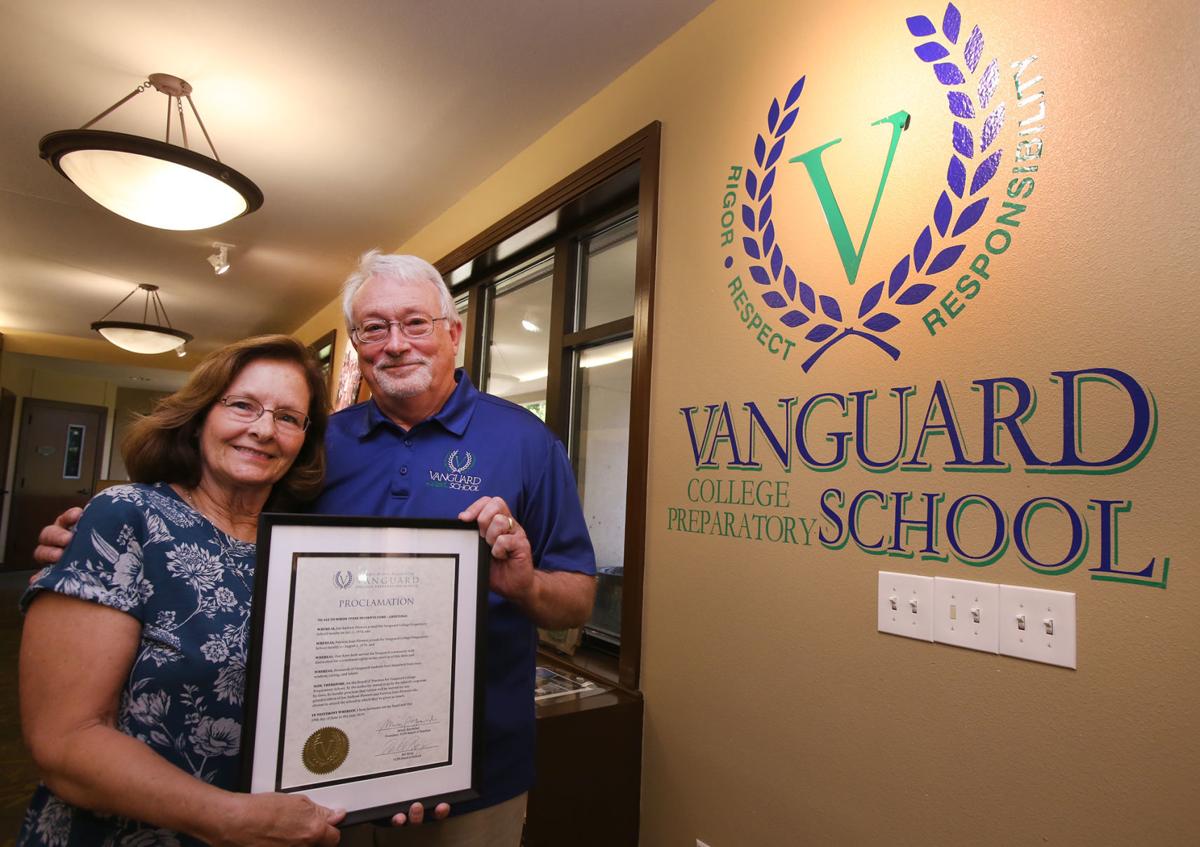 Patty and Joe Flowers, who have taught at Vanguard for a combined 87 years, received a proclamation from the school recognizing their service. 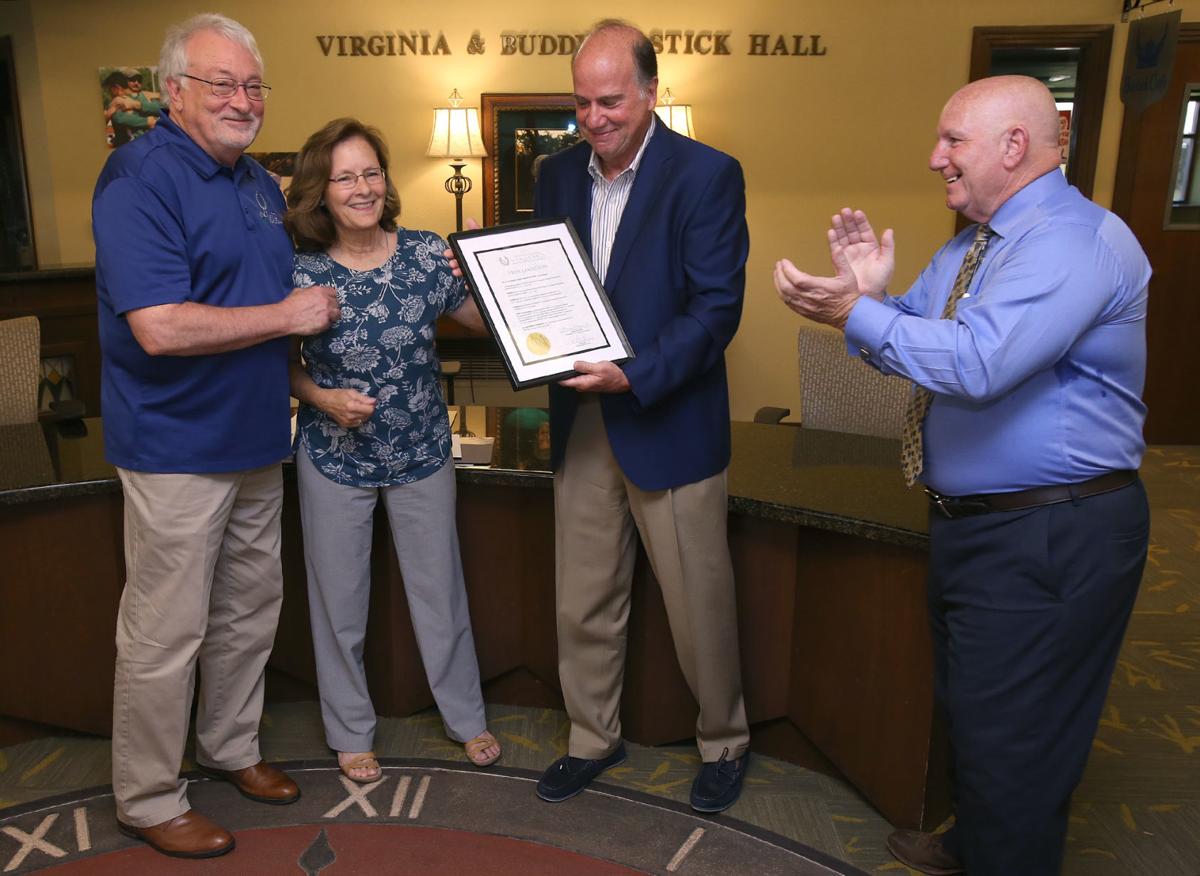 Patty and Joe Flowers, who have taught at Vanguard for a combined 87 years, received a proclamation from the school recognizing their service.

In the combined 87 years Joe and Patty Flowers have taught at Vanguard College Preparatory School, they have educated a motley crew of Waco notables, including country music star Pat Green and Waco Mayor Kyle Deaver.

The Flowers have watched the school and its students flourish, and they have observed various educational trends come and go, while the school’s mission to prepare students for life after high school has remained constant. They are a part of the foundation of the school that brought them together, with Joe Flowers joining the original Vanguard staff in 1973 and Patty Flowers coming on board five years later in 1978.

The Vanguard board of trustees honored the couple during its meeting Wednesday with a proclamation that describes how “thousands of students have benefited from their wisdom, caring and talent.” As an added plus, the couple’s grandchildren will receive free tuition to the private school that serves seventh through 12th grades.

“We just both love the school, and we love what it does for kids,” Patty Flowers, 63, said. “And we love being a part of it. That’s where we have common ground.”

Before he joined the original Vanguard staff as a math teacher and technology director, Joe Flowers, 70, worked as a systems analyst for the Western Institute for Science and Technology, a joint project between Baylor University and Texas State Technical College designed to create “cutting edge technological projects,” he said.

Patty Flowers came along five years later, after graduating from the University of Northern Colorado in Greeley, Colorado. Vanguard hired her as a physical education teacher and basketball coach. Her major was in science education, but her minor was in physical education.

“At the time, I was hired to coach basketball and did not know we didn’t have a gym,” she said with a laugh. “I did not ask.”

For the first year and a half, the students practiced at nearby Mountainview Park, leaving the school’s scuba diving, water skiing and golf equipment to gather dust in a room.

“Those were the sports being taught back then,” Patty Flowers said. “It was not my idea of what the regular physical education program was like.”

Joe Flowers said the school vision’s was to hire experts in their fields to teach various subjects.

“They got people to teach that were authorities,” he said. “They had degrees in the field they were teaching, so we had a certified diving instructor on staff. He was a coach. We tried to go with the people that had the expertise in their areas, so we were given that flexibility.”

Vanguard founding member Louis Bright, who taught at Baylor, told Joe Flowers they were going to take a computer to Vanguard and teach students how to use it.

“I’m proud that we’ve had technology here since day one,” Joe Flowers said. “That was the ‘70s, not like today. You had to have a direct phone line from wherever the campus was to the computer system. It’s totally different now.”

It did not take long for Joe and Patty Flowers to notice one another. They bonded over chaperoning end-of-quarter trips for students, taking them on canoe trips down from the Lake Whitney Dam.

“We had the same interests, and she’s definitely the better half,” Joe Flowers said. “Everybody always asks me ‘how did you get to deserve her?’”

On spring break in 1980, the couple married in a simple ceremony in Colorado Springs, Colorado, where Patty Flowers’ parents lived.

“Joe is a person who can do anything he wanted to do ever. He’s that talented. He’s like a magnet. He attracts people because he’s so smart,” Patty Flowers said. “I was attracted to his responsibility, his caring personality.”

The couple have met some of their best friends at Vanguard, and both of their children graduated from the private school.

“That’s one reason Vanguard is so special is because we’ve made some wonderful ties with our colleagues,” Patty Flowers said. “We have roots here.”

But the students make it all worthwhile. Joe Flowers recalled one bad week he had at school. When he returned home one evening, he checked the mail and found a copy of a former student’s doctoral dissertation in there.

“In the front, he just said ‘thanks for the help,’” he said. “You can’t put into words what that means.”

Mayor Deaver said he had both Joe and Patty Flowers as teachers when he attended Vanguard in the late ‘70s and early ‘80s. His children also had the teachers when they attended the private school years later.

“They’re great teachers,” Deaver said. “They’ve always been really committed to the kids and trying to help them learn not only their school subjects but also learn some character skills. They’re great people.”

But the couple have had many students over the years, all of whom they consider their “kids.”

“That’s the way you think of all the students that graduate,” Joe Flowers said. “We’ve watched them accomplish amazing things, things I wouldn’t have dreamed of.”

In addition to educating the mayor of Waco, the couple taught country music star Pat Green, who returned to Vanguard years after graduation and fame had settled in to perform at the school. Patty Flowers said Green would wonder what his former English teacher, Mrs. Davis, would think of his lyrics.

“It’s rewarding to see that the kids still remember,” she said.

When asked how Deaver and Green were as students, Joe Flowers paused and said: “Everybody grows and changes. They turn out fine. They just take different paths to get there.

“The one thing I told Pat Green was that at least we know that you’re not going to be a mathematician,” he said with a laugh.