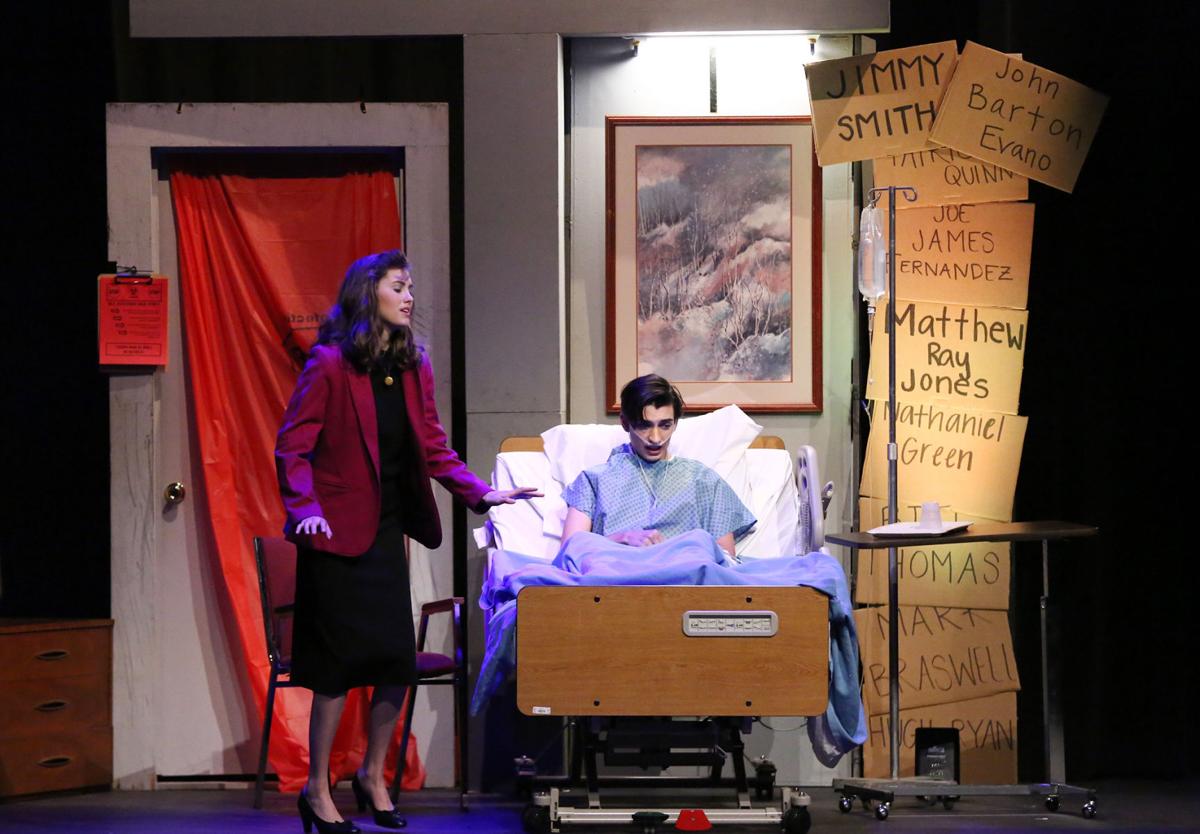 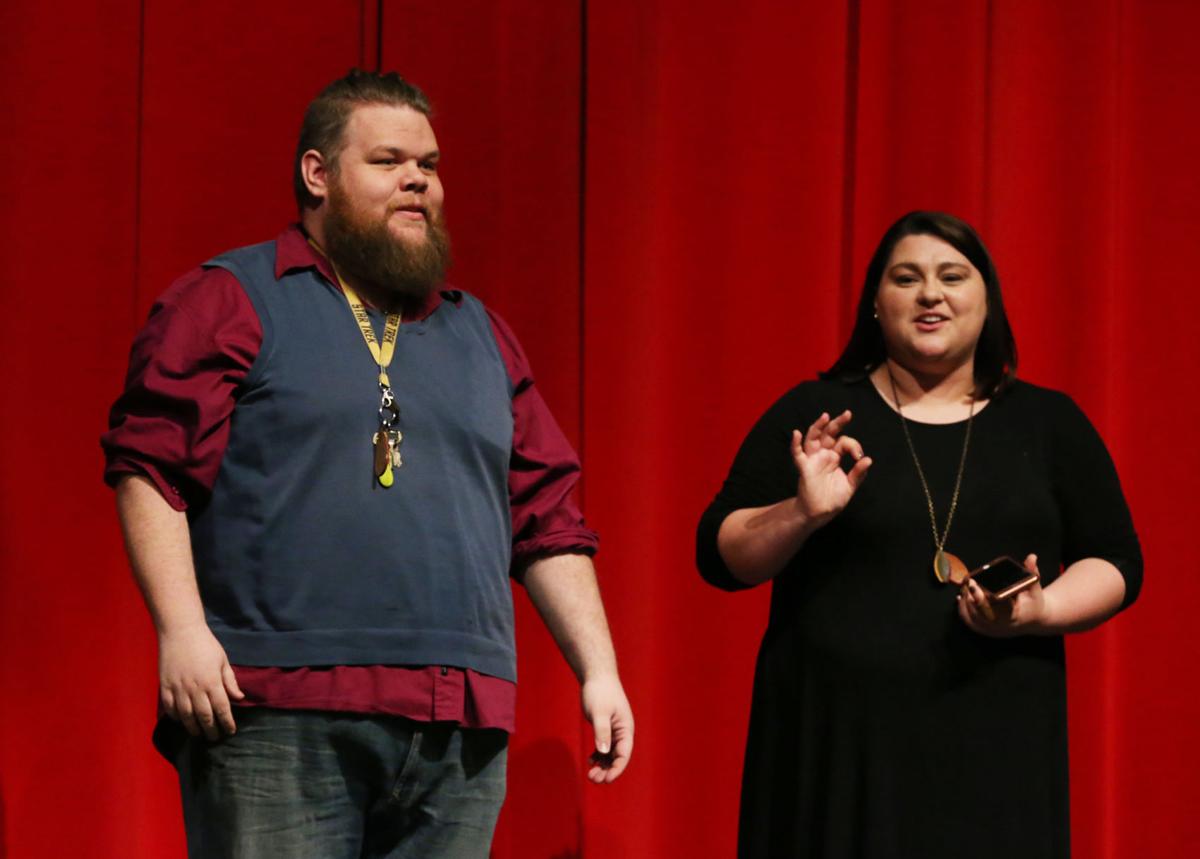 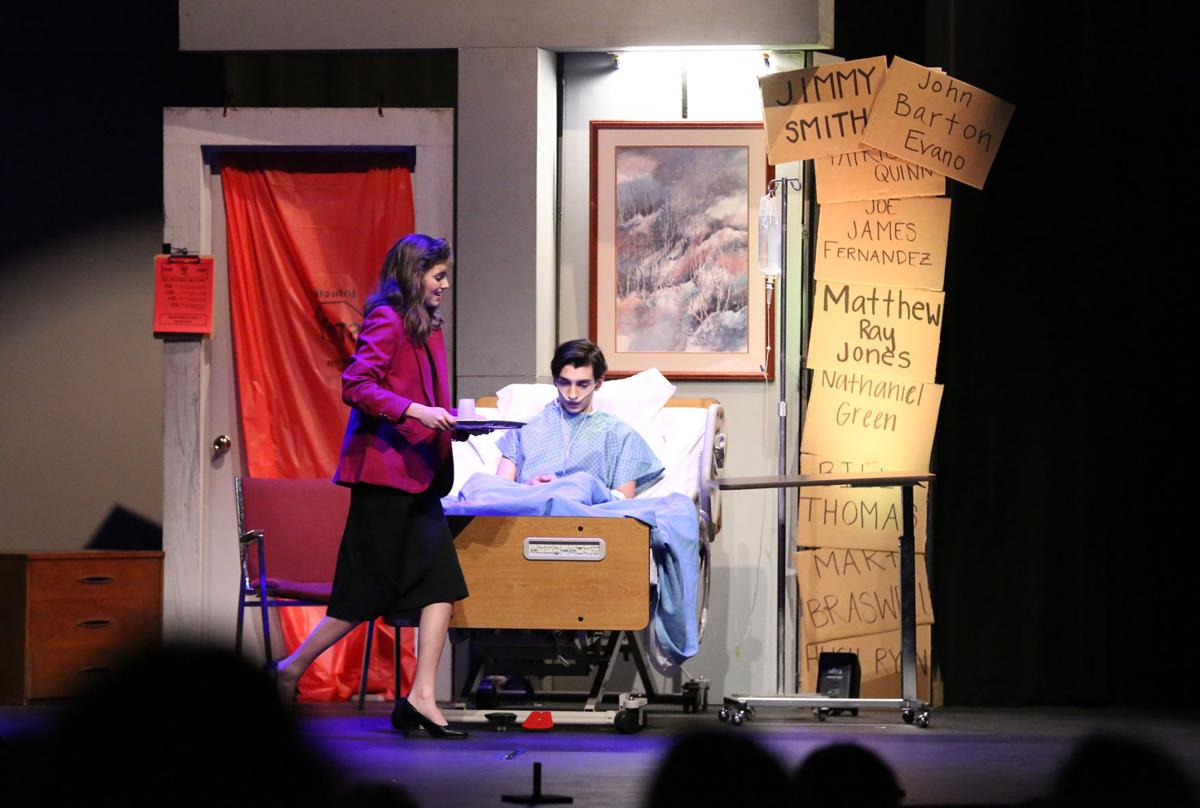 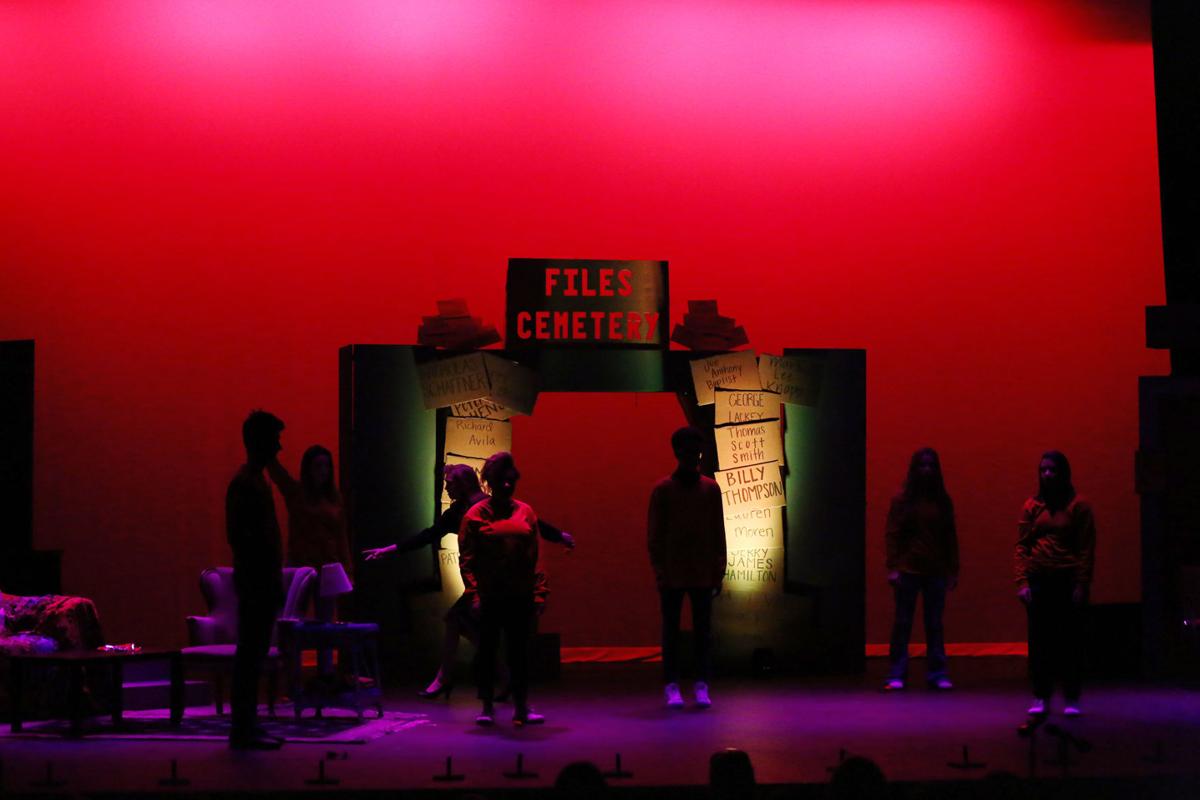 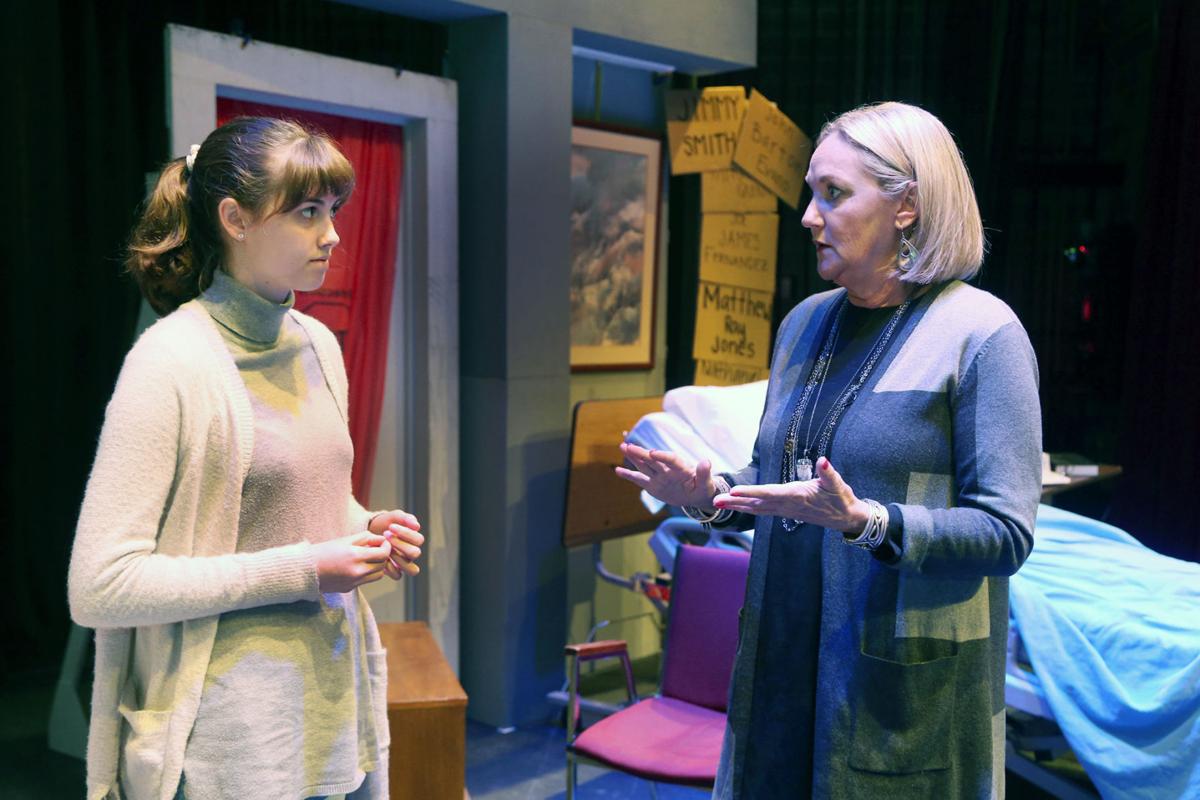 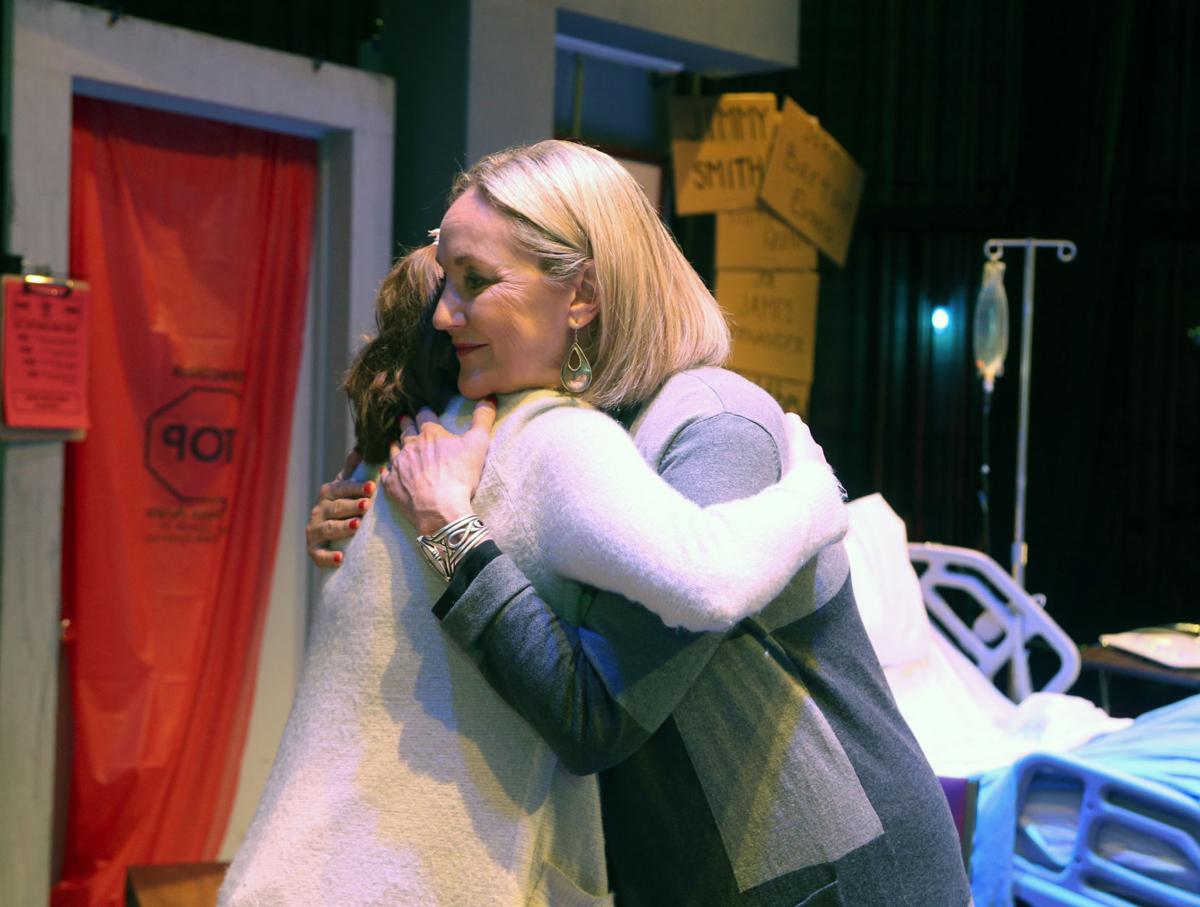 Leaning all his weight on a cane, Billy reached for Ruth’s shoulder and asked how she did it.

How did she have the ability not to break down after watching friend after friend waste away?

How did she have the ability to sit at someone’s bedside on their dying day, when no one else would?

Ruth shrugged, looked into the young 20-something female impersonator’s eyes and said, “I do it, so you can do what you need to do.”

In the scene painted by Waco High School senior Nick Atkins and junior Emily Hines, the two students and at least a dozen of their peers portrayed Burks’ story more than 20 years after it started.

Burks helped hundreds of people rejected by their families in Little Rock, Arkansas, during the height of the AIDS epidemic in the 1980s and early ’90s, before advances in medication and care.

Waco High’s technical director, Cory Garrett, wrote the script. He intertwined news broadcasts of Burks between scenes and wanted to develop something that would reach an audience well beyond the competition stage, whether the cast wins or loses, Garrett said.

“Since we can’t control whether or not we’re going to advance, we’re just going to have fun and give the kids the experience of creating a new work,” Garrett said.

“Originally, we had this idea about a circus trainer in 1918, so it was this creepy circus thing. We were working on that, and almost a year ago now, we were sitting in the classroom when we saw on Facebook, there was an article about her.”

What Garrett didn’t entirely know of is the likelihood that Burks would be sitting on the front row of their first local, live performance to see her life played before her. They had planned for it from the beginning, by connecting to Burks through Facebook, but donations from other high school one-act play directors and teachers made the dream a reality just in time for the curtains to open, director K’Lynn Childress said.

“They told me she was here when she first arrived, but I wanted to meet her afterward. But in the last scene of the show, I actually started crying,” Hines said. “And when we came out, I immediately saw her sitting in the front row. I waved to her and immediately started crying all over again. I’ve been nervous this entire time to meet her because I wanted to make her proud.”

Hines, Atkins and other cast members met with Burks after the show for the first time. Their jaws dropped and they applauded when she entered the room, and she immediately told them how grateful she was for the honor.

“You all did an amazing, amazing job. You hit the nail on the head,” Burks said to the students. “When I was in high school, no one would even mention the word ‘gay,’ and no one even knew anything about it. If you knew, you couldn’t talk about it at all. It just blew me away how comfortable you were with the subject.”

Burks continues to serve in an advocacy role, speaking at colleges across the nation and raising awareness about HIV and AIDS, she said. But as she shared stories from her past with the students, she said “The Red Door” brought back memories of the struggles her friends in the LGBT community face.

“I have a dear friend, and it was so obvious to me, to everybody. Johnny was really picked on. It was horrible what people said and did, and it was just awful,” Burks said. “The other night, I was talking to him on Facebook, and he asked if I was going to a reunion. I said I didn’t know if I am or not, and he’s 57 years old and afraid to go home because he’s afraid of what people will say and do because he’s gay.”

Burks’ efforts started in 1984 while she paced a hospital hallway in Little Rock, waiting for a friend who was being treated for cancer. She noticed a door with a red bag over it, meant to quarantine an AIDS patient named Jimmy Cook who had been in the hospital for six weeks and wasn’t getting any better.

Back then, six weeks was the average life span of a person once they had been diagnosed with AIDS, she said. Nurses argued who would treat Cook during rounds for fear of contracting the illness themselves. When Cook asked for his mother in his last days, a nurse slipped his mother’s phone number to Burks. Cook’s mother told Burks her son died a long time ago because of his lifestyle choices.

After that, Burks took on the role of managing AIDS patients’ doctor’s appointments, picking up medication, giving men and women a shoulder to cry on when necessary and even delivering Christmas cards and decorations when they had no one.

And when they passed on, she buried their bodies in her family’s cemetery of 262 plots passed down from her mother after a family disagreement, she said. She often prayed over them, citing the power of God’s forgiveness during funerals. Burks, who is also a childhood friend of former President Bill Clinton, served as a White House consultant on AIDS education after Clinton was elected, according to the Arkansas Times.

Garrett said the reaction to the play from the audience has been as reassuring as that of Burks.

“The amount of storytelling that happened last night, the people telling their stories of the people who are gay or died of AIDS in their lives after the show was really special,” Garrett said.

For each life lost during the performance, the Waco High actors donned white shirts and handed Hines a rose to place in a holder onstage, representing each person Burks helped.

Though Atkins said he didn’t know much about the AIDS epidemic before auditioning for the show, he recognized the opportunity to show how many different kinds of people the crisis impacted, he said.

The lessons Waco High students were able to learn by telling Burks’ story are still just as important as they were in the ’80s, Burks said. Medical advances have made HIV and AIDS easier to address, but the nation still deflects on conversations about understanding the LGBT community, she said.

“We couldn’t have done this in Arkansas. It wouldn’t have happened. They would’ve gotten their federal funding pulled. But I was shocked and so delighted at how it turned out and how it was so accurate,” Burks said. “We’ve gone backwards in education, because now it’s like: ‘Don’t talk about it. Abstinence only.’ That’s great if it was a fairy tale we lived in, but it’s not, and the rate of new HIV infection is so high in young people.

“I get people all the time who call me, and they’ve just found out they’re (HIV-) positive and thought it was an old man’s disease. I think part of what happened is everyone died, and there wasn’t anybody to teach the young people and to warn them.”

Burks buried more than 40 AIDS victims in her family’s cemetery, and others would call her and tell her a lover had died and asked for permission to bury them in one of the plots, she said. But she doesn’t know how many people may have ultimately buried someone there, because she would tell people to “just go pick a spot,” she said.

The moments played out onstage involving Billy’s life define it all, she said. Those memories hit her the hardest, down to the scene where Billy handed her his slim, red dress he often donned for shows at a local club and the time she took him to ride an elephant at Little Rock’s zoo a few weeks before his death, she said.

“I called a friend last night at like midnight when I got back to the (hotel) room and I said: ‘These kids are so brave and so talented. They took it to heart,’ ” she said. “We need to educate everyone.”