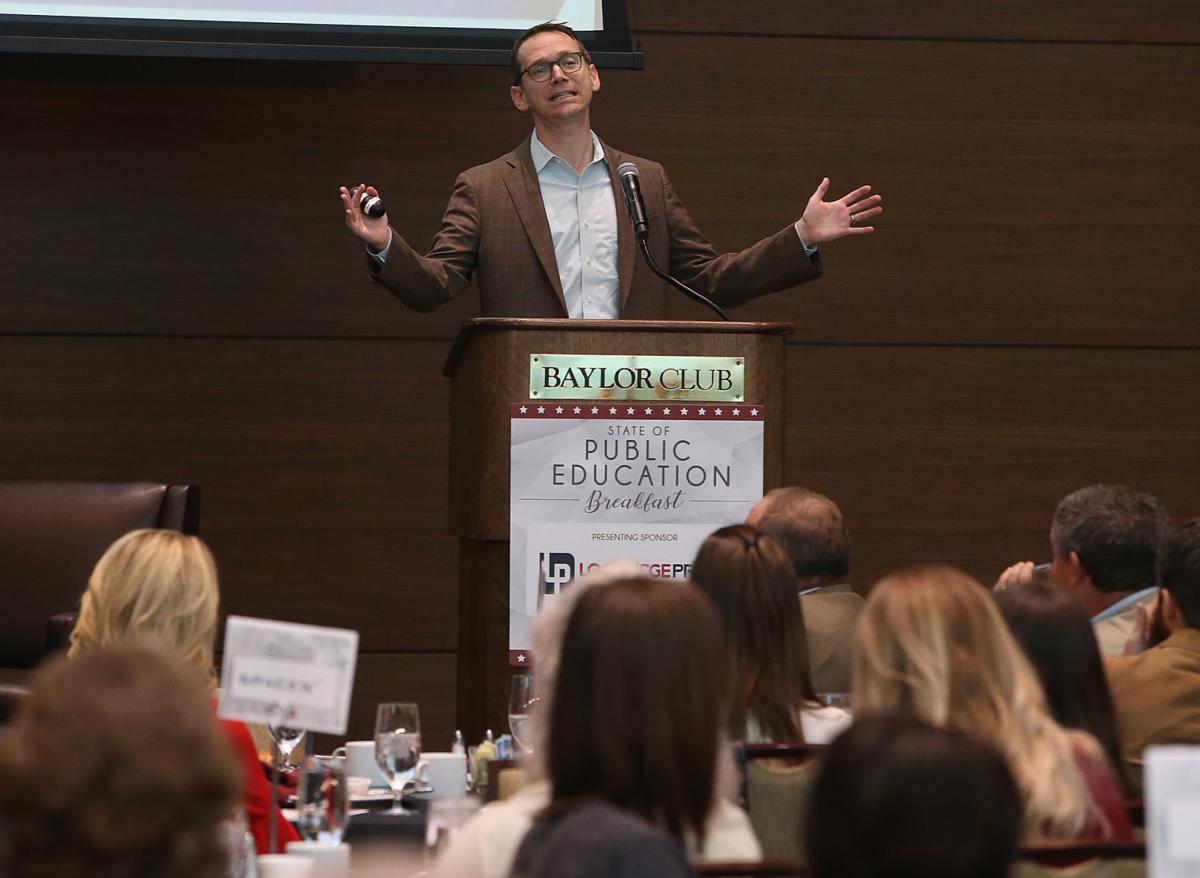 Texas Education Commissioner Mike Morath speaks at the State of Public Education breakfast at the Baylor Club on Wednesday. 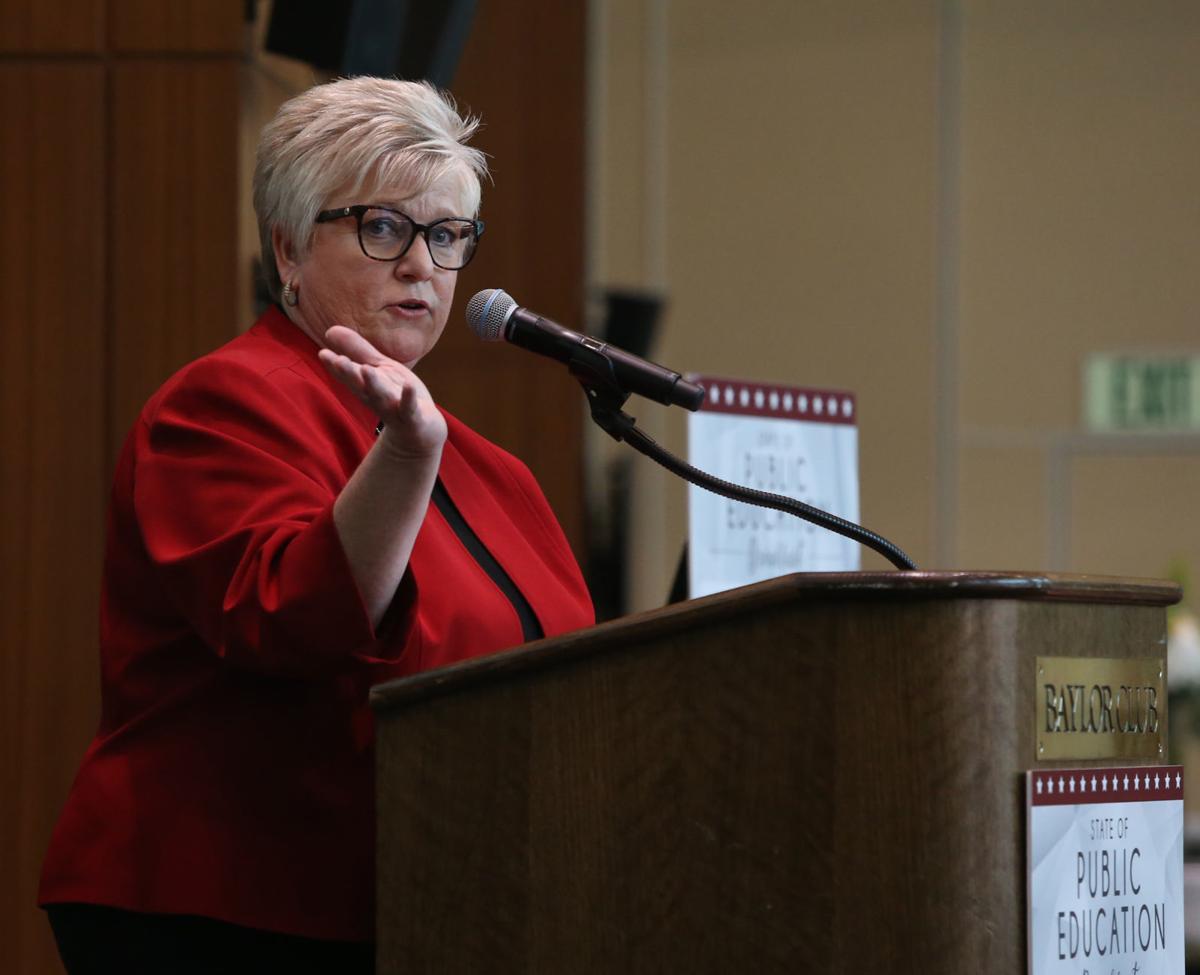 Waco ISD Superintendent Susan Kincannon speaks at the State of Public Education breakfast at the Baylor Club on Wednesday. 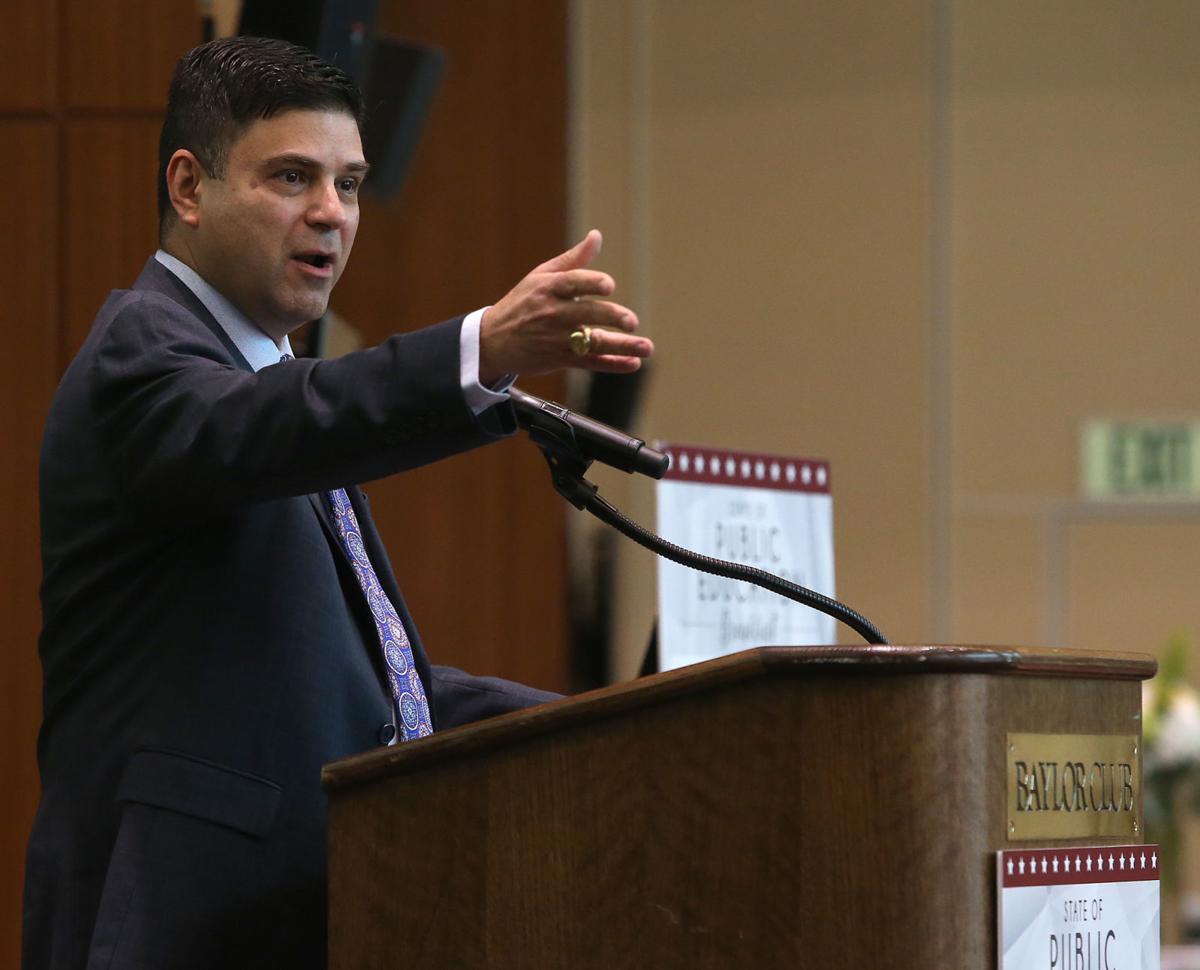 Midway ISD Superintendent George Kazanas speaks at the State of Public Education breakfast at the Baylor Club on Wednesday.

Texas Education Commissioner Mike Morath speaks at the State of Public Education breakfast at the Baylor Club on Wednesday.

Waco ISD Superintendent Susan Kincannon speaks at the State of Public Education breakfast at the Baylor Club on Wednesday.

Midway ISD Superintendent George Kazanas speaks at the State of Public Education breakfast at the Baylor Club on Wednesday.

Texas Education Commissioner Mike Morath emphasized the importance of investing in high quality educators to spur student academic achievement during his keynote speech for the State of Public Education breakfast held by the Greater Waco Chamber of Commerce on Wednesday.

The commissioner focused his remarks on a recently passed school finance reform law and a new accountability system that rates campuses and districts by a letter grade, from A through F. He touted the law’s $6.5 billion in new public education spending, which includes money to give teachers raises, fund free full-day pre-K for eligible 4-year-olds and allow districts to start merit pay programs that give better rated teachers bonuses between $3,000 and $12,000.

“We know without question that the teacher in the classroom is the single most important in-school factor that drives all these outcomes,” Morath said, “and if we’re going to get serious about improving our system, we’ve got to seriously love on those who love on our kids. The work that we do to improve our support for teachers is more important than anything else we will do.”

There are 750,000 more economically disadvantaged students in Texas public schools than there were 20 years ago, which presents teachers with a different set of challenges, Morath said. Students easily can jump those hurdles with the right assistance, he said.

“Just because you happen to be born to a low-income family does not mean you do not possess the ability to read, write and do math at high levels. Poverty is not passivity,” he said. “But if you have a huge number of kids who walk into school and bring in massive numbers of challenges from home, it doesn’t make it easy to make that school an atmosphere and ecosystem that delivers high levels of achievement, that changes cyclical and sometimes multi-generational circumstances of poverty.”

Often, in the U.S. race is a proxy for class, Morath said, but there are districts with 80% of students who are economically disadvantaged that are delivering “life-changing, community-changing excellence.”

“We have educators who have proven that this myth that ‘demography is destiny’ is a lie,” he said.

There are 296 campuses across the state with extremely high concentrations of poverty that demonstrate high academic success for all students, Morath said. The question is how to replicate what those schools are doing.

To improve student outcomes, districts and the state must focus on how to better train and retain teachers to help every student to be prepared for what comes after high school, Morath said. But right now, the view of the teaching profession is “fundamentally broken.”

Morath said only 4% of Texas high school students want to be a teacher in 2019, “an all-time low.” According to a survey of American adults, last year was the first in 50 years in which survey respondents said they did not want their children to become teachers, he said.

“It is work that requires a tremendous amount of preparation and skill and reflection. It is work that is, in fact, brain surgery,” he said. “That is what our teachers do. They walk into an operating room, and they are operating on 20 brains, molding, and there’s no anesthesia in that surgery. The kids are awake. They’re giving feedback throughout the operation.”

The audience laughed. Morath added: “The work that our teachers do makes the work of neurosurgeons look easy.”

That is why the state raised teachers’ minimum salaries with the new school finance reform law and allowed districts to create their own merit pay structures, he said. But Morath expressed support for merit-based pay raises, instead of salary increases based on years of experience. He said regular raises each year sends an “insidious message” to teachers that their work does not matter.

Morath touted the Accelerating Campus Excellence program, which Dallas ISD launched in 2015 to save seven failing schools. Other districts including Fort Worth ISD and Garland ISD also have implemented the program in hopes of helping their struggling schools, but the program is not without controversy because of its reliance on test scores.

The program works by placing a district’s best teachers and principals in its lowest performing schools, based on state standardized exams, and devoting additional funding to the campuses.

“You’ve seen those schools basically go from F to B almost overnight, sort of proving the lie that ‘demography is destiny,’ ” Morath said.