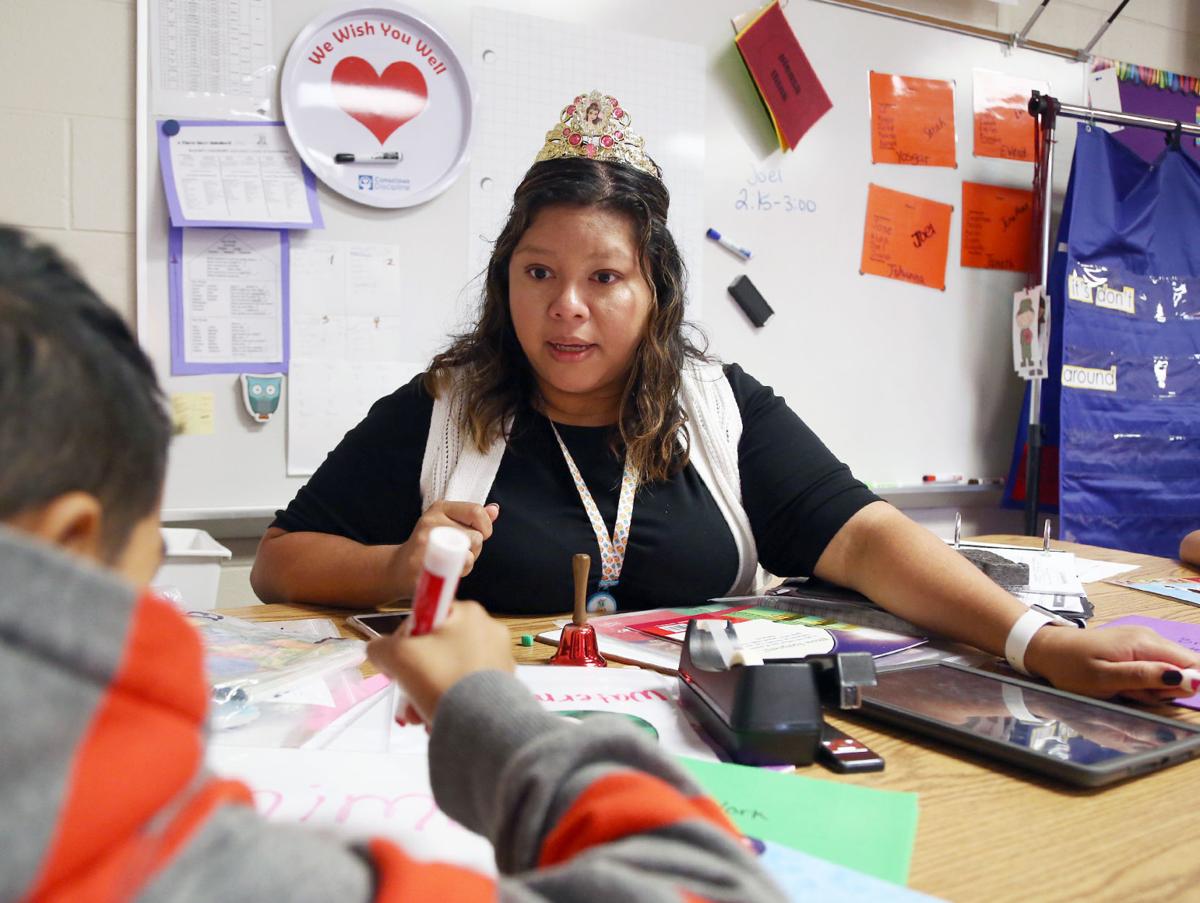 Guadalupe Zuniga, a Brook Avenue Elementary second grade teacher, works with students in this photo from 2017. A new staffing study includes a recommendation for Waco ISD to add several teachers at the elementary level. 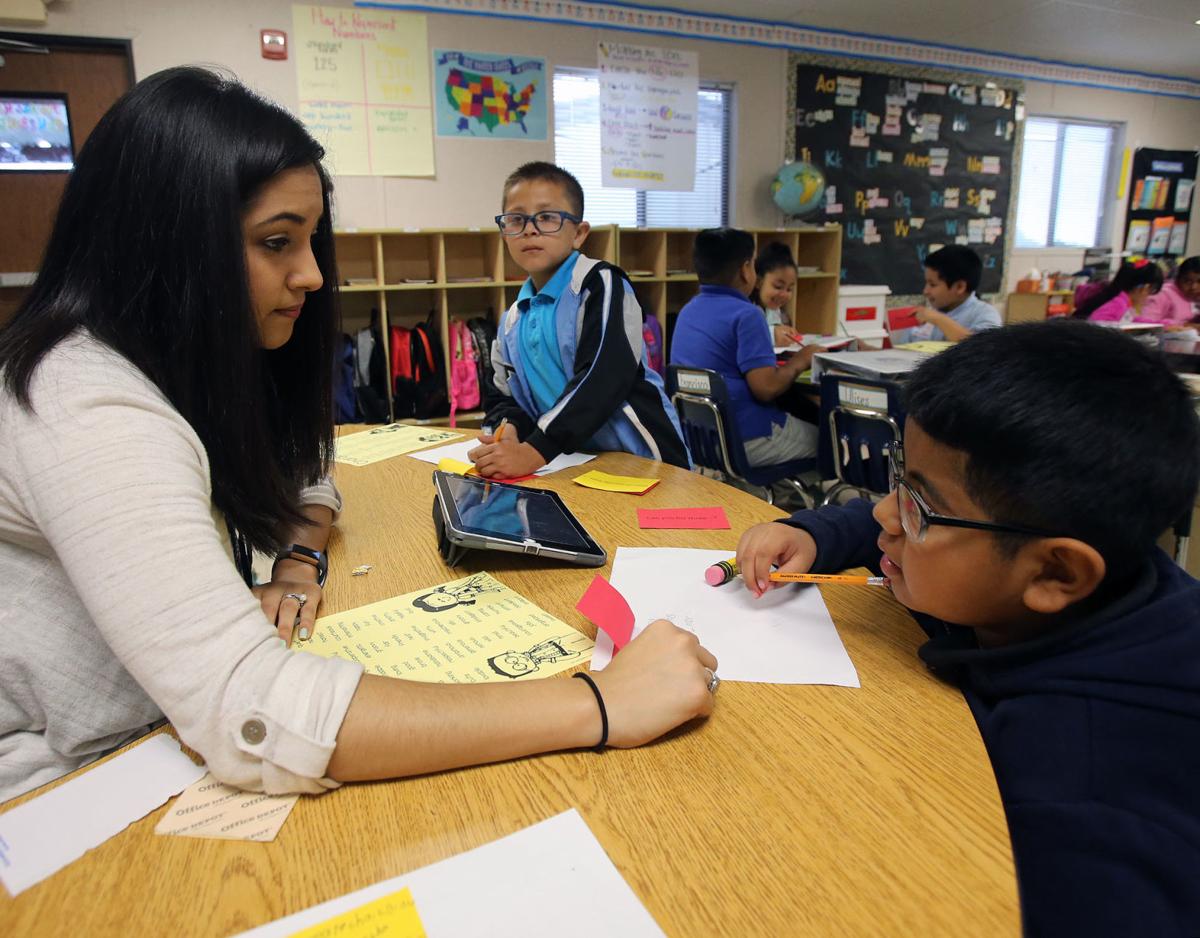 Cedar Ridge Elementary teacher Grecia Chavira works with her students in this photo from 2018. A new staffing study includes a recommendation for Waco ISD to add several teachers at the elementary level.

Guadalupe Zuniga, a Brook Avenue Elementary second grade teacher, works with students in this photo from 2017. A new staffing study includes a recommendation for Waco ISD to add several teachers at the elementary level.

Cedar Ridge Elementary teacher Grecia Chavira works with her students in this photo from 2018. A new staffing study includes a recommendation for Waco ISD to add several teachers at the elementary level.

The Waco Independent School District could save more than $3.6 million in the next few years by eliminating several administrative and assistant principal positions, while adding more elementary and special education teachers, according to a staffing study.

The Texas Association of School Boards’ study recommends Waco ISD restructure multiple administrative departments, such as finance and human resources, to streamline those areas and add many campus-level workers, such as counselors, librarians and teachers so there are enough for every student in the district.

But it is unlikely Waco ISD will implement every recommendation in the TASB study, especially considering the uncertainty about what school will look like in the fall, Superintendent Susan Kincannon said during a special school board meeting Thursday night. The Texas Education Agency has not yet provided school districts with guidance on how to plan for the upcoming school year in light of the COVID-19 pandemic.

“It could take some time,” Kincannon said. “It’s likely we’re going to need extra staff this fall if we have to have 11 or 15 kids in a classroom. It’s strategic, so we have to decide what recommendations we want to take and when we want to implement them.”

Waco ISD is not cutting jobs but would eliminate the positions in the report through attrition, meaning the district would cut the recommended jobs as people leave them.

TASB looked at Waco ISD’s student enrollment and staff and compared them to districts of similar sizes with comparable student demographics, or peer districts, said Zachary Hobbs, TASB human resources services assistant director. The report used last year’s rate of Waco ISD students who are considered economically disadvantaged by the state, 76.9%, but the district’s rate for this past school year was 90.5%.

Some of the 10 peer districts included in the study are Brazosport, Bryan, Crowley, Duncanville, Harlandale and Wichita Falls ISDs.

The report also compares Waco ISD to TASB’s salary survey data and guidelines from various professional associations, such as the Texas Counseling Association and the National Association of School Nurses.

Among the report’s findings, it states that Waco ISD’s student enrollment dropped 1.3% from the 2015-16 school year to the 2018-19 school year. In that same time frame, total personnel increased about 6.4%.

Hobbs said most districts take two to three years to implement these staffing changes through attrition, but that process could be sped up if the district wanted to go ahead and eliminate non-contract positions.

“This is just information for the district to make decisions going forward,” he said. “You may have a different initiative than some other districts in certain areas, and you may want to staff heavier or lighter in certain areas because of that initiative. It’s going to force you, as a district, to look at these areas and evaluate them.”

Kincannon said the district will have to look at the “big picture,” including its budget and specific needs. She said she knows Waco ISD needs more counselors and special education teachers.

Trustees Cary DuPuy and Stephanie Korteweg both said the district should take the report’s recommendations and tailor them to Waco ISD’s needs.

Board Secretary Norman Manning agreed, saying he believes the district’s elementary schools need more support, while the Waco ISD administration is “top heavy.” He emphasized the need for all Waco ISD schools to perform better according to state academic standards and to do that in a way that works in Waco, not somewhere else.

“We have to look at what Waco ISD is doing,” Manning said. “Until we close that graduation gap and get schools better rated, we have to do things differently here. Until we reach a level of success, some of these staffing guidelines will not work for us.”