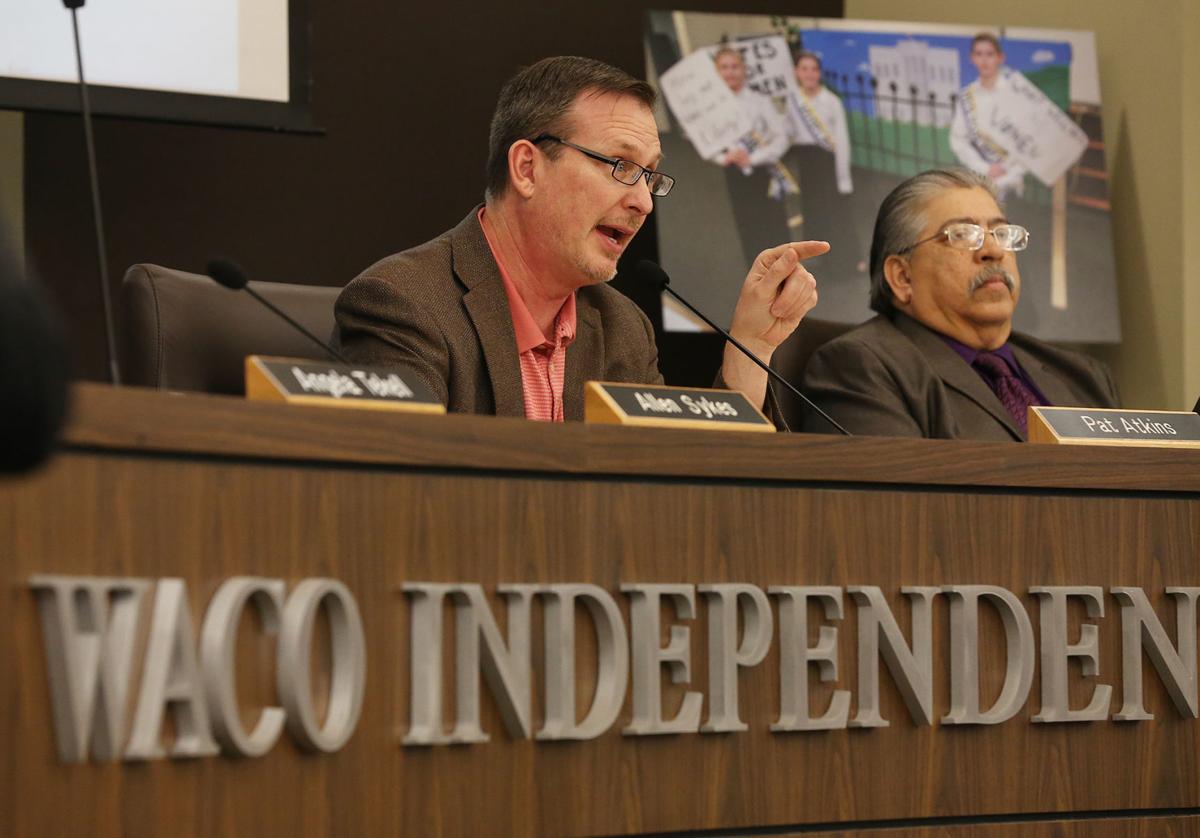 Waco ISD board President Pat Atkins discusses the resignation of Superintendent A. Marcus Nelson during a meeting Thursday. 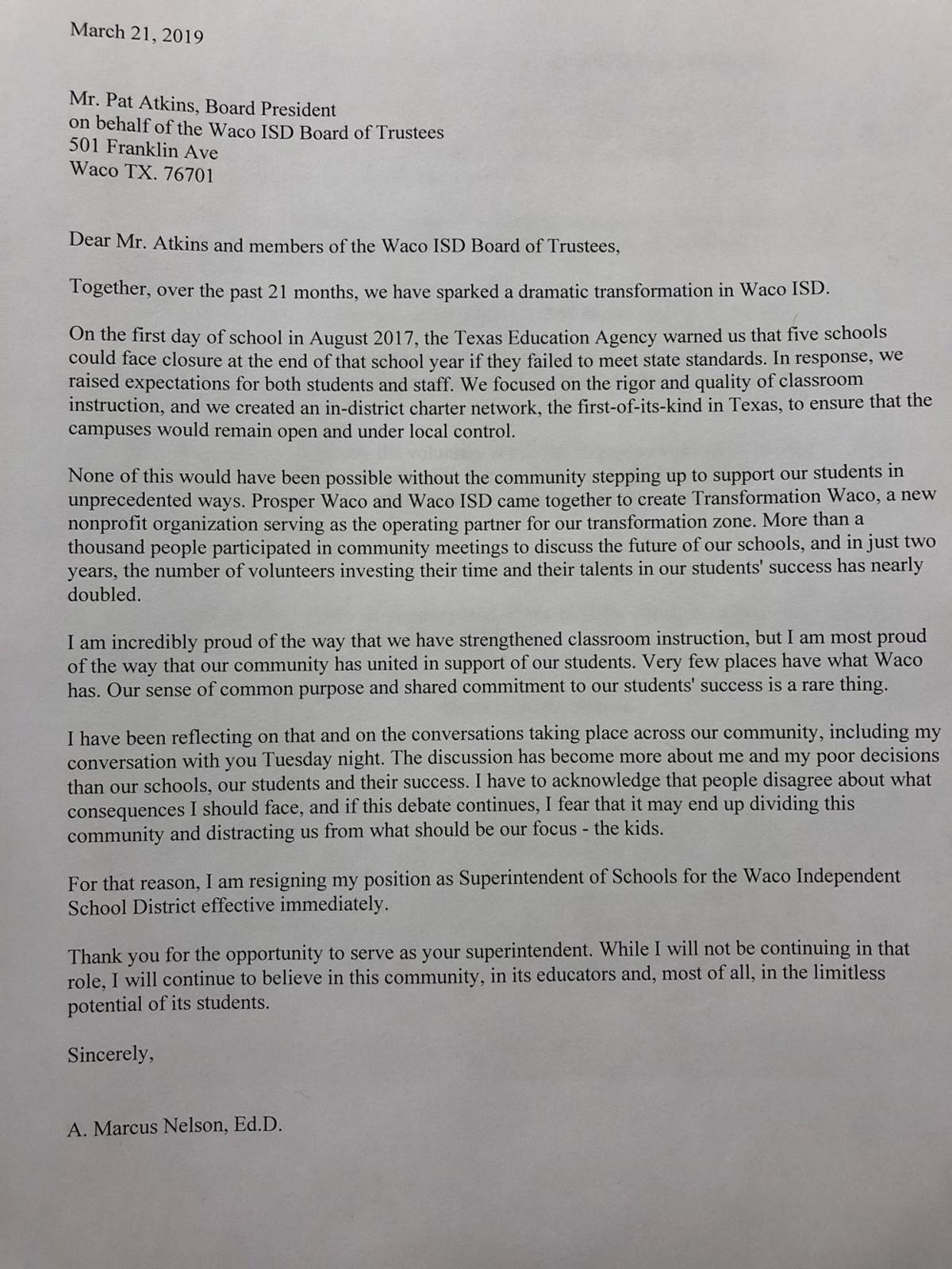 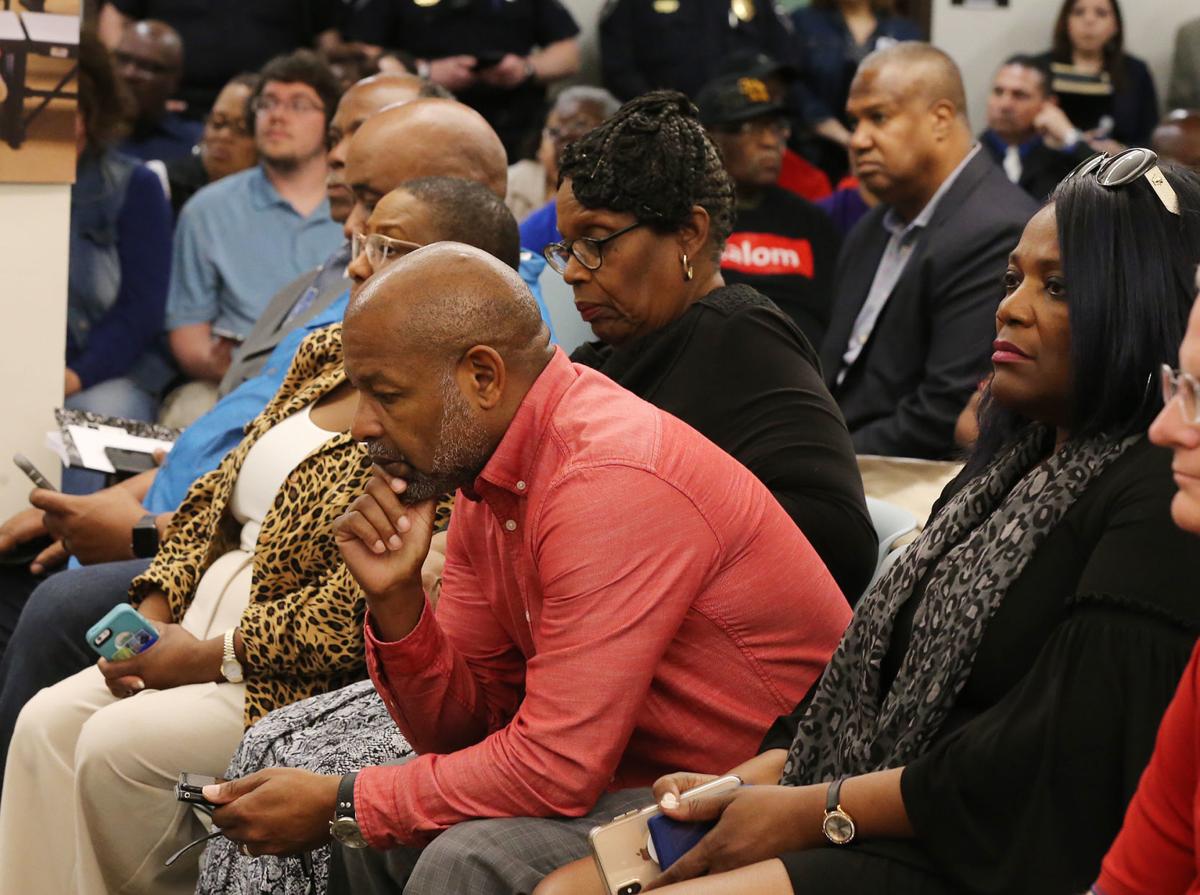 Residents reflect on the announcement of Superintendent A. Marcus Nelson’s resignation Thursday in response to his March 6 arrest on a misdemeanor marijuana possession charge. 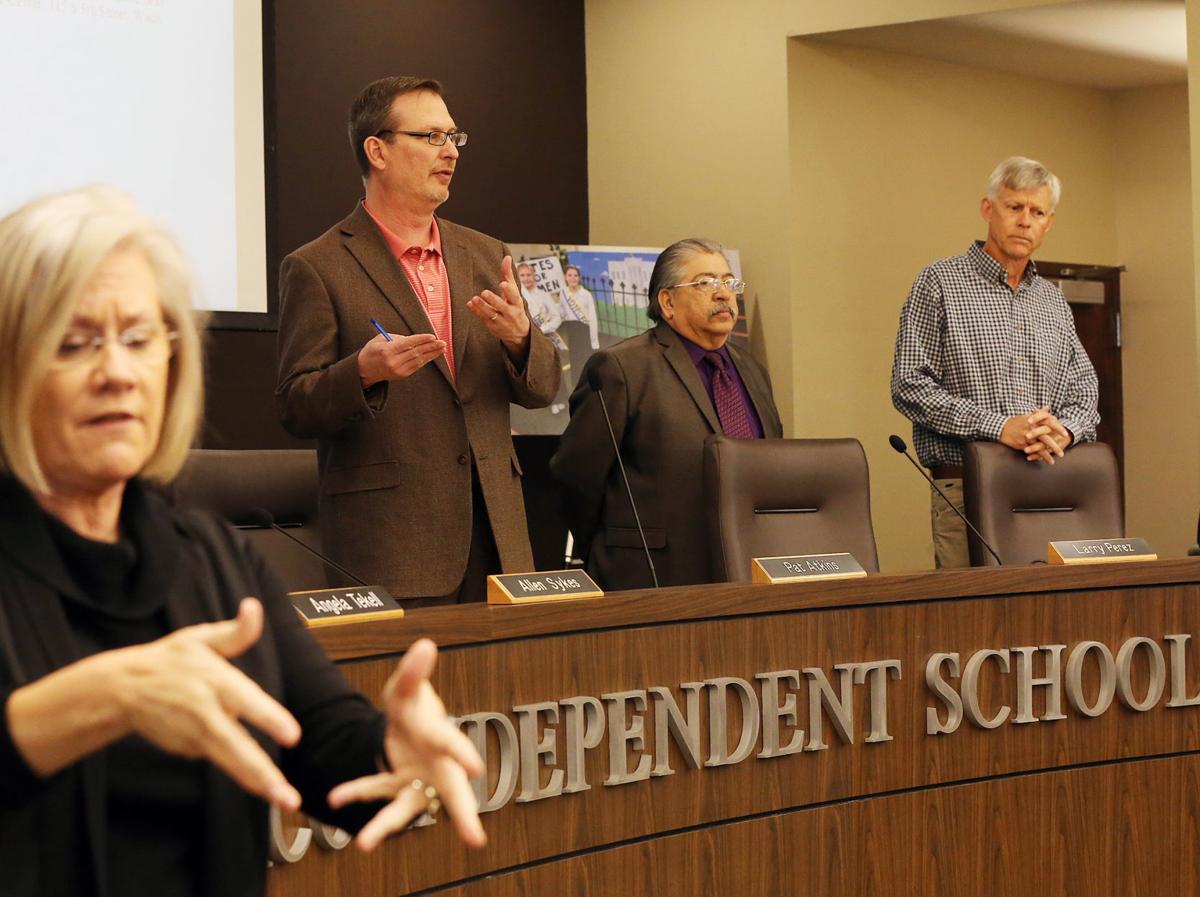 Waco ISD board President Pat Atkins addresses the crowd gathered for Thursday's meeting before heading to executive session to discuss Superintendent A. Marcus Nelson, who was arrested March 6 on a misdemeanor marijuana possession charge. Board members Larry Perez and Cary DuPuy are at the right, and a sign language interpreter is at the left. 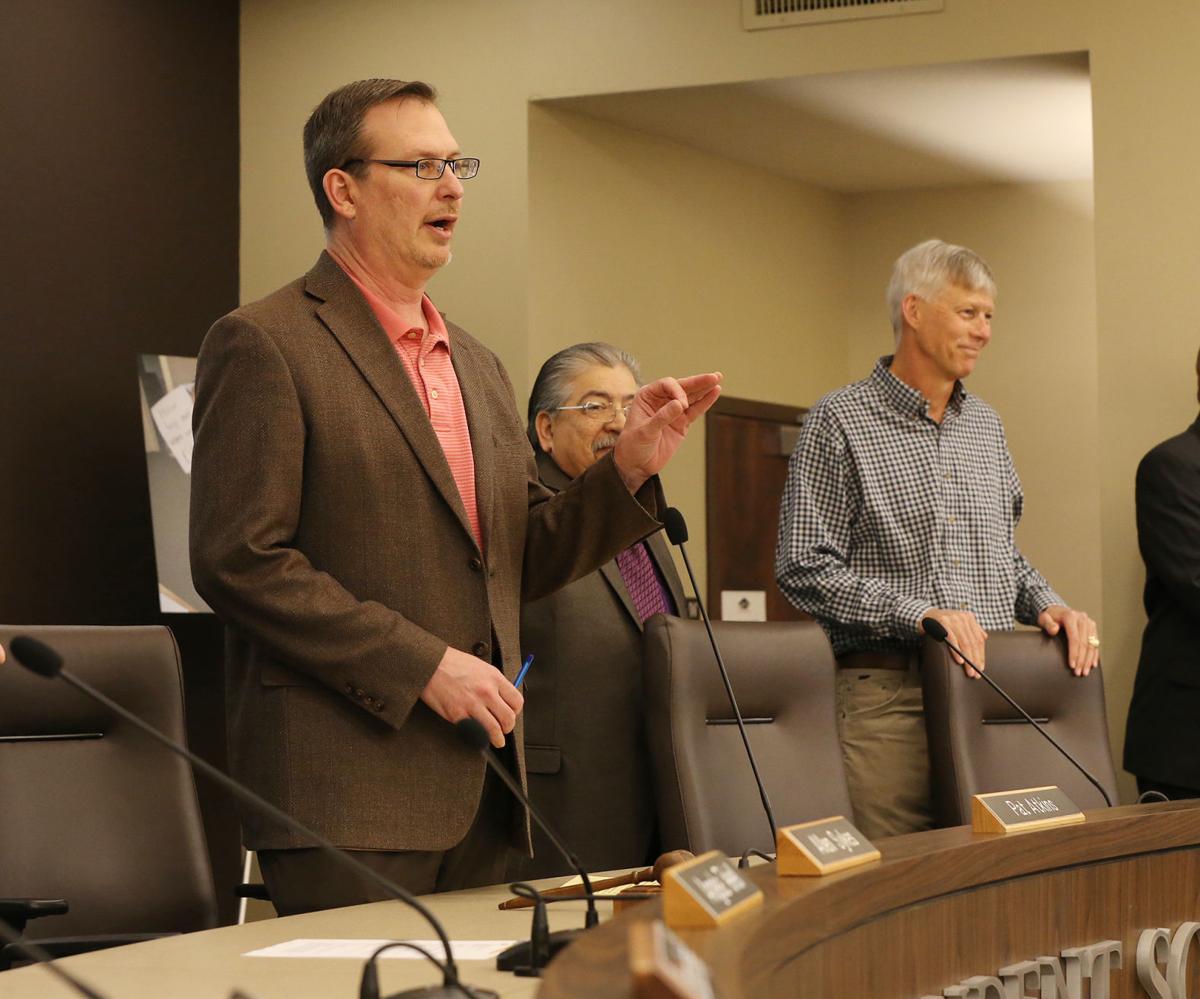 Waco ISD board President Pat Atkins addresses the crowd gathered for Thursday's meeting before heading to executive session to discuss Superintendent A. Marcus Nelson, who was arrested March 6 on a misdemeanor marijuana possession charge. Board members Larry Perez and Cary DuPuy are at the right.

Waco ISD board President Pat Atkins discusses the resignation of Superintendent A. Marcus Nelson during a meeting Thursday.

Residents reflect on the announcement of Superintendent A. Marcus Nelson’s resignation Thursday in response to his March 6 arrest on a misdemeanor marijuana possession charge.

Waco ISD board President Pat Atkins addresses the crowd gathered for Thursday's meeting before heading to executive session to discuss Superintendent A. Marcus Nelson, who was arrested March 6 on a misdemeanor marijuana possession charge. Board members Larry Perez and Cary DuPuy are at the right, and a sign language interpreter is at the left.

Waco ISD board President Pat Atkins addresses the crowd gathered for Thursday's meeting before heading to executive session to discuss Superintendent A. Marcus Nelson, who was arrested March 6 on a misdemeanor marijuana possession charge. Board members Larry Perez and Cary DuPuy are at the right.

The board unanimously voted to accept a separation agreement with Nelson after meeting in closed session for two-and-a-half hours Thursday and four-and-a-half hours Tuesday. Nelson will receive $96,000 in four payments over the next four months, according to the agreement.

The board plans to name an interim superintendent next week.

Board President Pat Atkins read a statement from Nelson to the board before the vote. In the statement, Nelson recalls the Texas Education Agency’s 2017 warning that five schools could face closure if they failed to meet state standards again that school year. He also praises the efforts of the community to turn around four of those schools and the creation of the in-district charter system known as Transformation Waco.

“Our sense of common purpose and shared commitment to students’ success is a rare thing,” Nelson wrote. “I have been reflecting on that and on the conversations taking place across our community, including my conversation with you Tuesday night. The discussion has become more about me and my poor decisions than our schools, our students and their success. I have to acknowledge that people disagree about what consequences I should face, and if this debate continues, I fear that it may end up dividing this community and distracting us from what should be our focus — the kids.”

One of those kids, Brigitte Eichenberg, spoke at the Tuesday meeting and said Nelson ought to be held to the same standards as students, who would be put in an alternative school if they were caught with marijuana on campus.

“It makes me really sad to see Dr. Nelson go because he did so many great things for our district and for our students,” the Waco High School junior said Thursday. “But I do believe that the school board and Dr. Nelson ultimately came to an agreement or decision that they probably thought would be best for the district and the students.”

Eichenberg said she interacted with Nelson several times, including when he attended a tennis match she played in when the team made it to a regional competition.

“I felt like I really had a relationship with Dr. Nelson, and that’s why this whole situation just makes me so sad,” she said. “I wish it all could have never happened.”

Waco NAACP President Peaches Henry said this was not the outcome she was hoping for but that she wants the community to move forward together.

“We have spent almost two years working with Dr. Nelson, and he has worked with the community to improve the academic performance of the kids, to get the community engaged in the district and to give the entire community a strong, positive vision of what our children can do,” Henry said. “We want to continue to work as a community to maintain the progress that we’ve made and to move forward with our children, particularly as they face the upcoming STAAR test. We want to continue working with them so that the morale of the teachers and the administrators in this district will be high as these children are working through this next testing period.”

Atkins said some board members were concerned about the facts surrounding Nelson’s arrest and some comments the former superintendent made during interviews this past weekend. Some board members had “concerns about the consistency of the version of events that took place that night,” he said.

“There were others that were very sensitive to his supporters in the community and those who recognize his success in really uniting this community and its support of the Waco schools,” Atkins said. “It was time spent balancing those two and discussion about different options moving forward. The discussions between the board never became contentious. It was always board members very seriously taking their responsibility to this district and to this community.”

A state trooper stopped Nelson at about 9:25 p.m. March 6 on U.S. Highway 190/State Highway 6 outside of Hearne, about 55 miles southwest of Waco, for driving in the passing lane, according to an arrest affidavit.

Nelson said the arrest occurred when he was driving back from an interview with the Houston Independent School District board, although he said he was never a formal applicant for the superintendent position there. Before leaving Houston, he stopped at a friend’s house, and in conversation, he mentioned he had chronic back pain, Nelson said.

The friend suggested Nelson try marijuana, and Nelson smoked “a small sample” at the house, he said. He said he was not under the influence hours later when the trooper stopped him.

Nelson was booked into Robertson County Jail in Franklin and released the next day on his own recognizance. On Friday, Nelson signed a plea agreement with the Robertson County District Attorney’s Office and paid $500 to enter a pretrial diversion program. The charge will be dismissed if Nelson avoids trouble for 90 days.

Since his arrest, Nelson’s supporters have rallied to his defense. More than 5,800 people have signed a petition to keep him in the position, and a group of pastors held a news conference last week to support him.

The school board hired Nelson in April 2017. He served as Laredo Independent School District superintendent from 2009 until he started in Waco in June 2017. The Texas Association of School Boards named Nelson the 2014 Superintendent of the Year.

The Waco school board renewed Nelson’s contract in December, extending it through June 1, 2024. His annual salary is $272,000, plus benefits.

Nelson’s contract states the board may suspend him without pay or terminate his contract for “good cause.” The contract outlines multiple reasons that constitute “good cause” for suspension without pay or termination, including “illegal use of drugs, hallucinogens or other substances regulated by the Texas Controlled Substances Act” and “conviction of a felony or crime involving moral turpitude.”

A tip from officers: Yes, it is a violation to linger in the left lane

Superintendent Nelson to seek forgiveness from WISD board for pot arrest

The subdued, somber tone that filled the WISD boardroom when the board of trustees announced the resignation of A. Marcus Nelson lingers among his supporters long after the meeting.