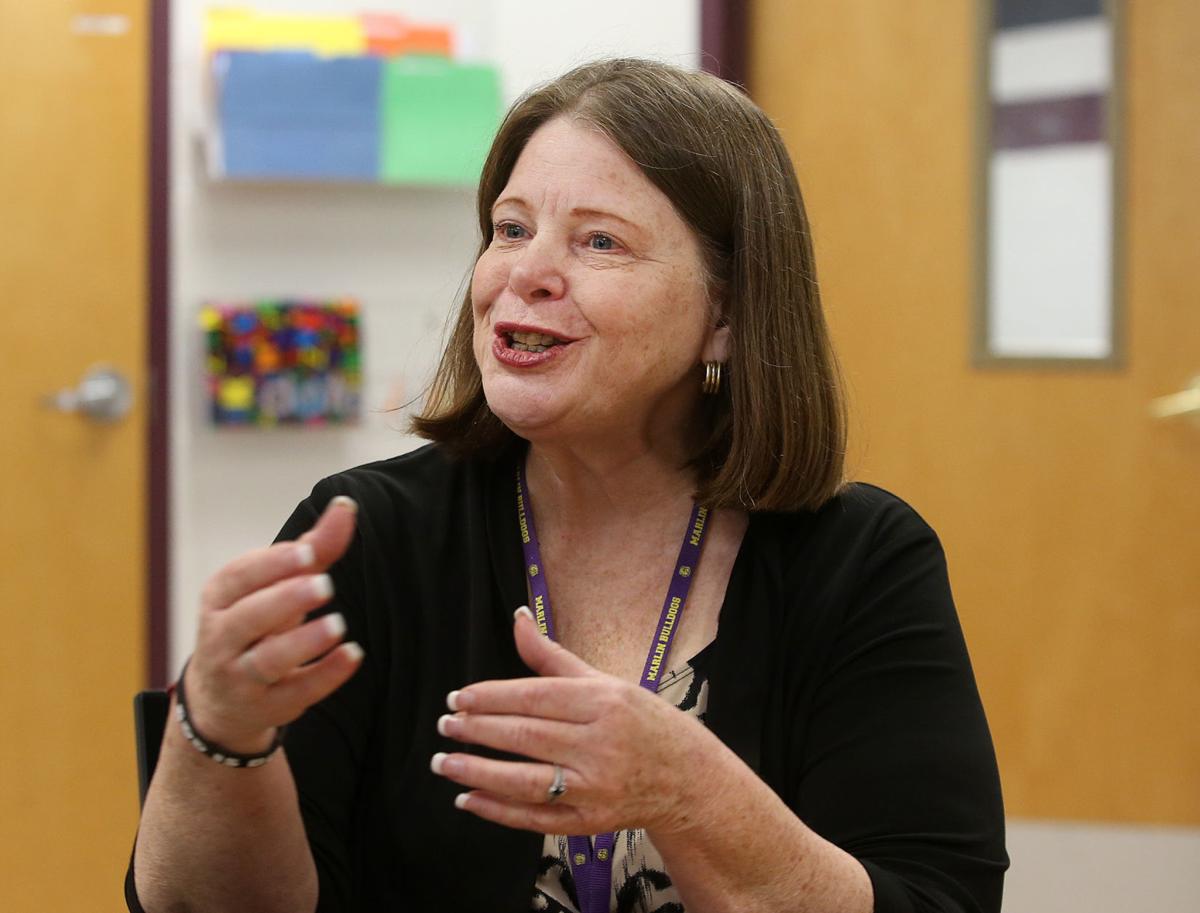 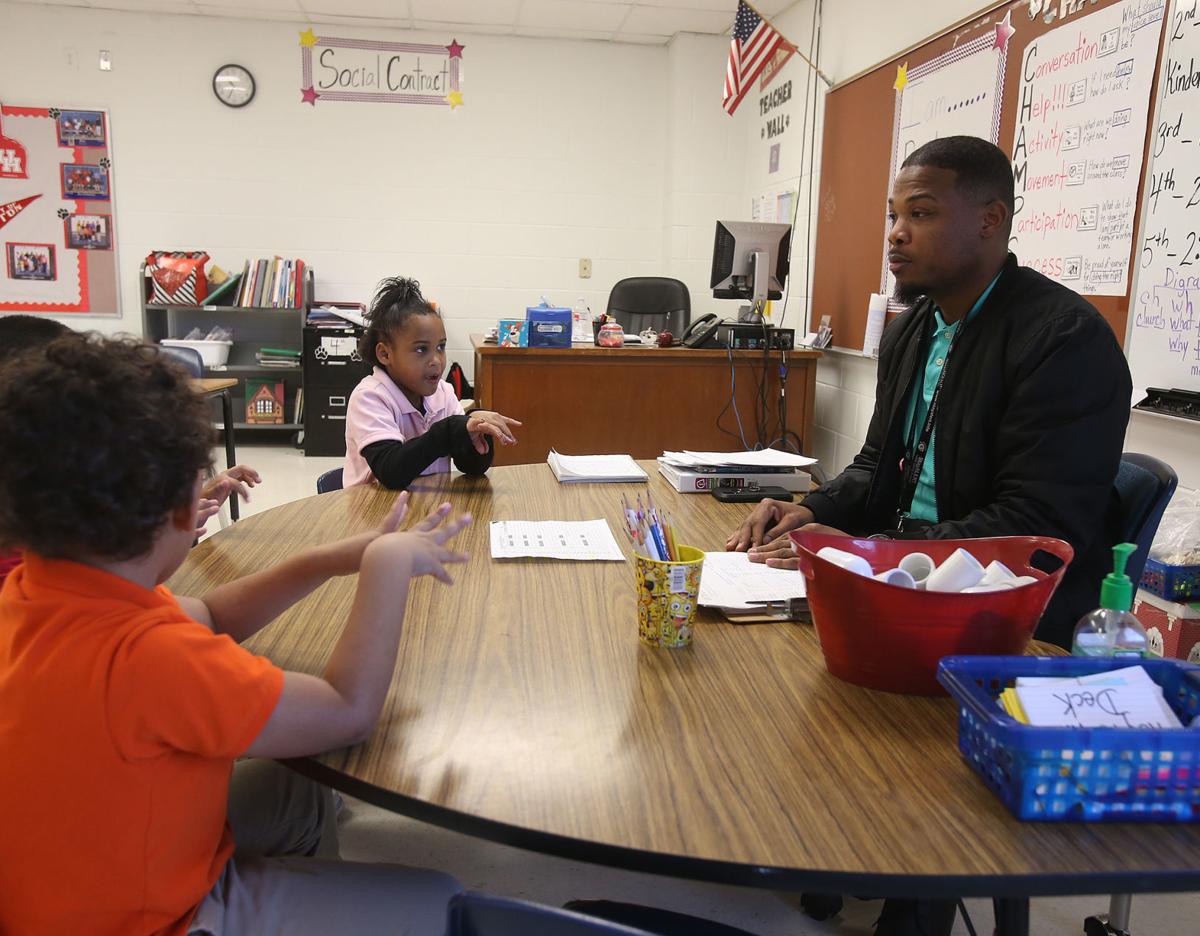 Marlin Elementary School reading specialist Demetrium Smith works with his students on learning how to pronounce letters properly, which enhances their reading skills. 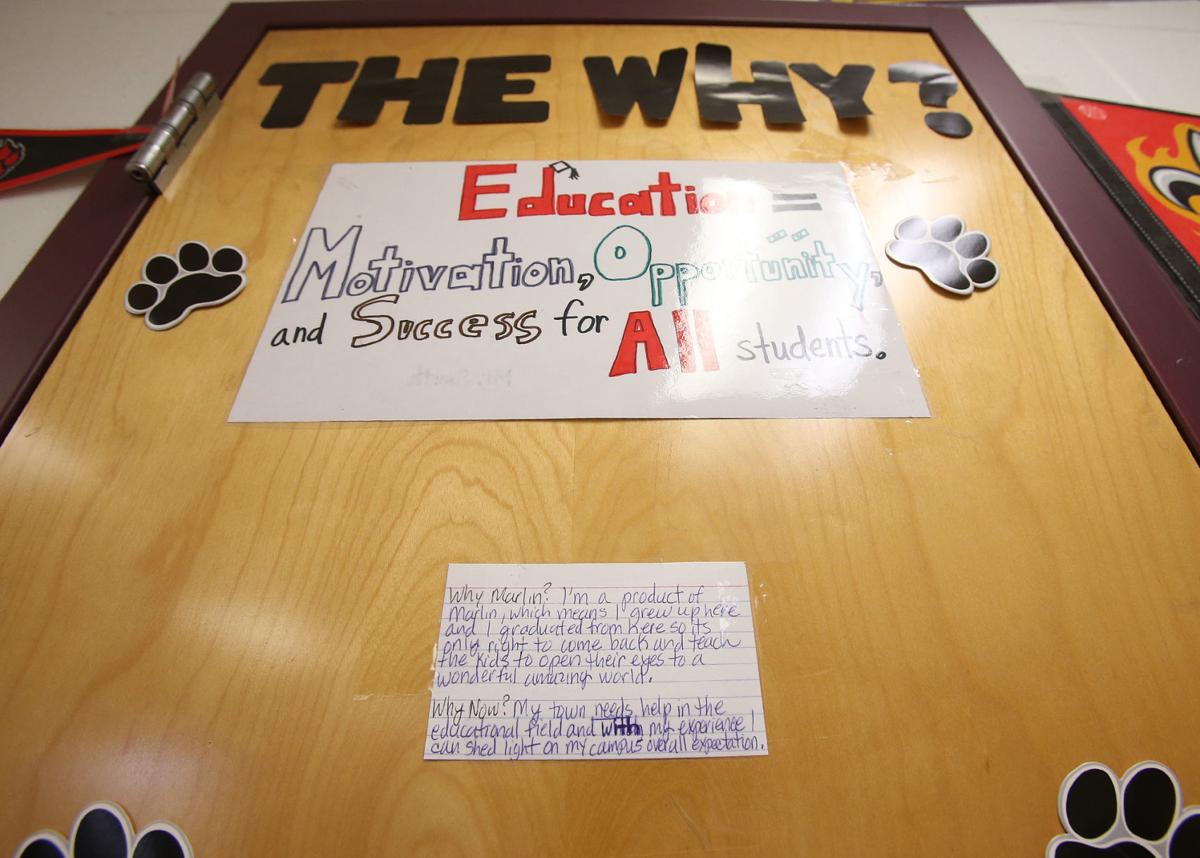 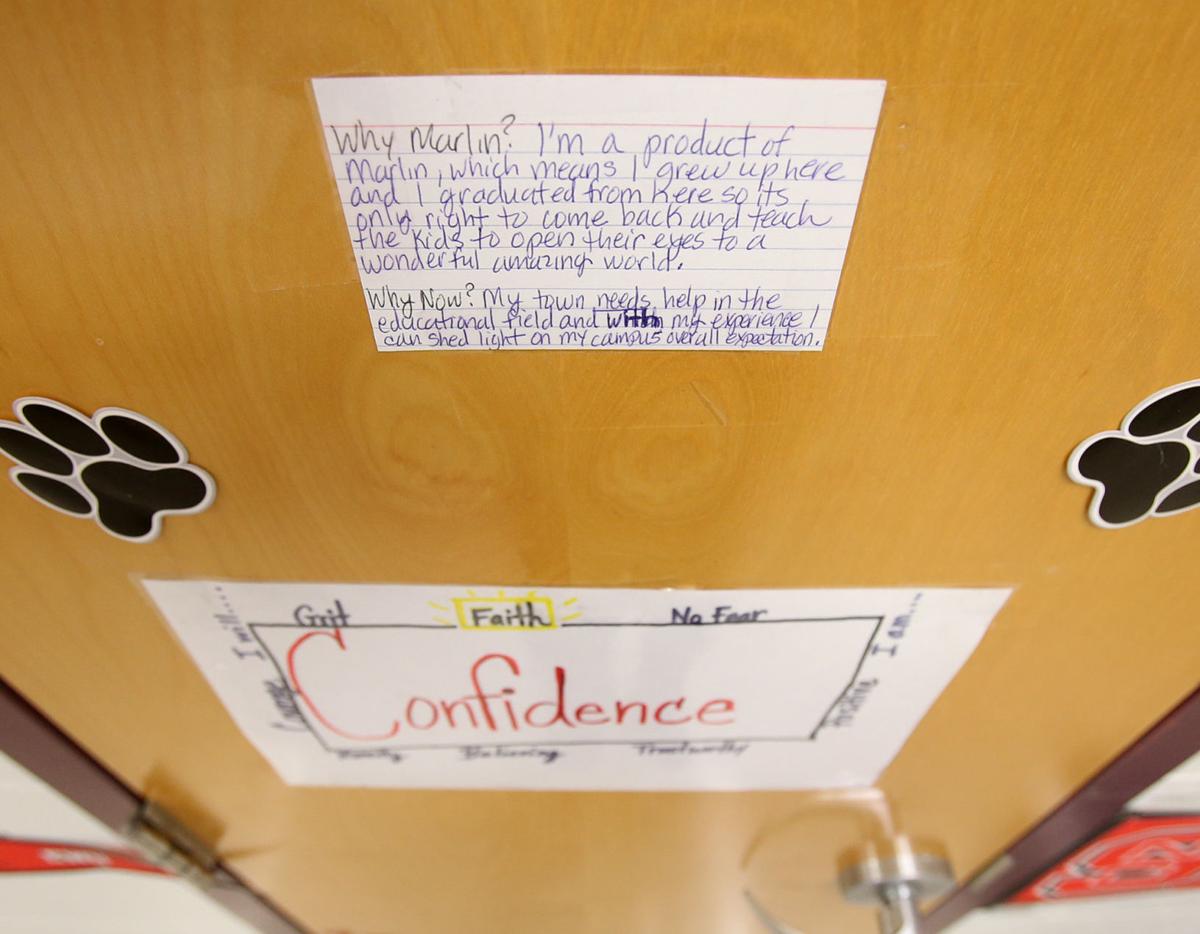 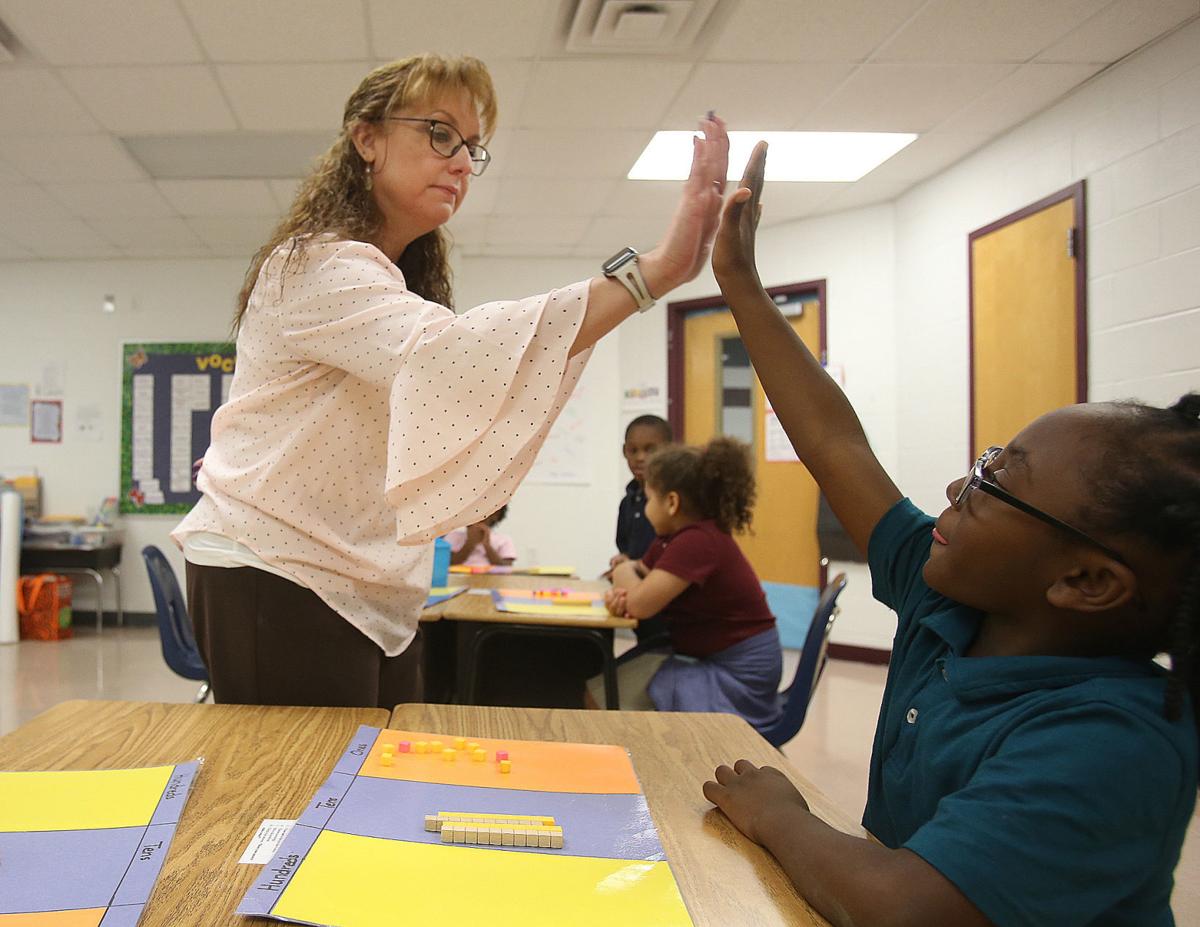 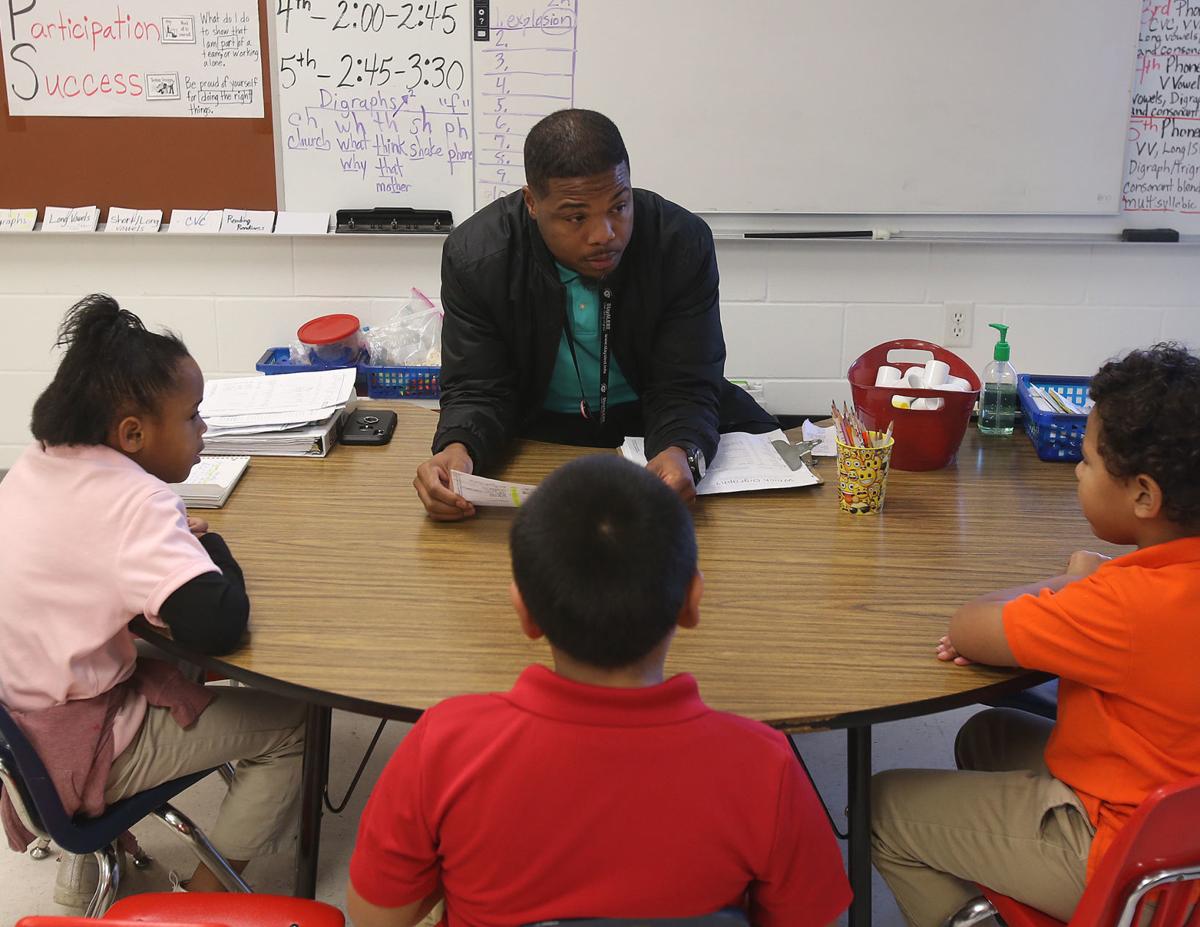 Marlin Elementary School reading specialist Demetrium Smith works with his students on how to pronounce letters properly, which enhances their reading skills. 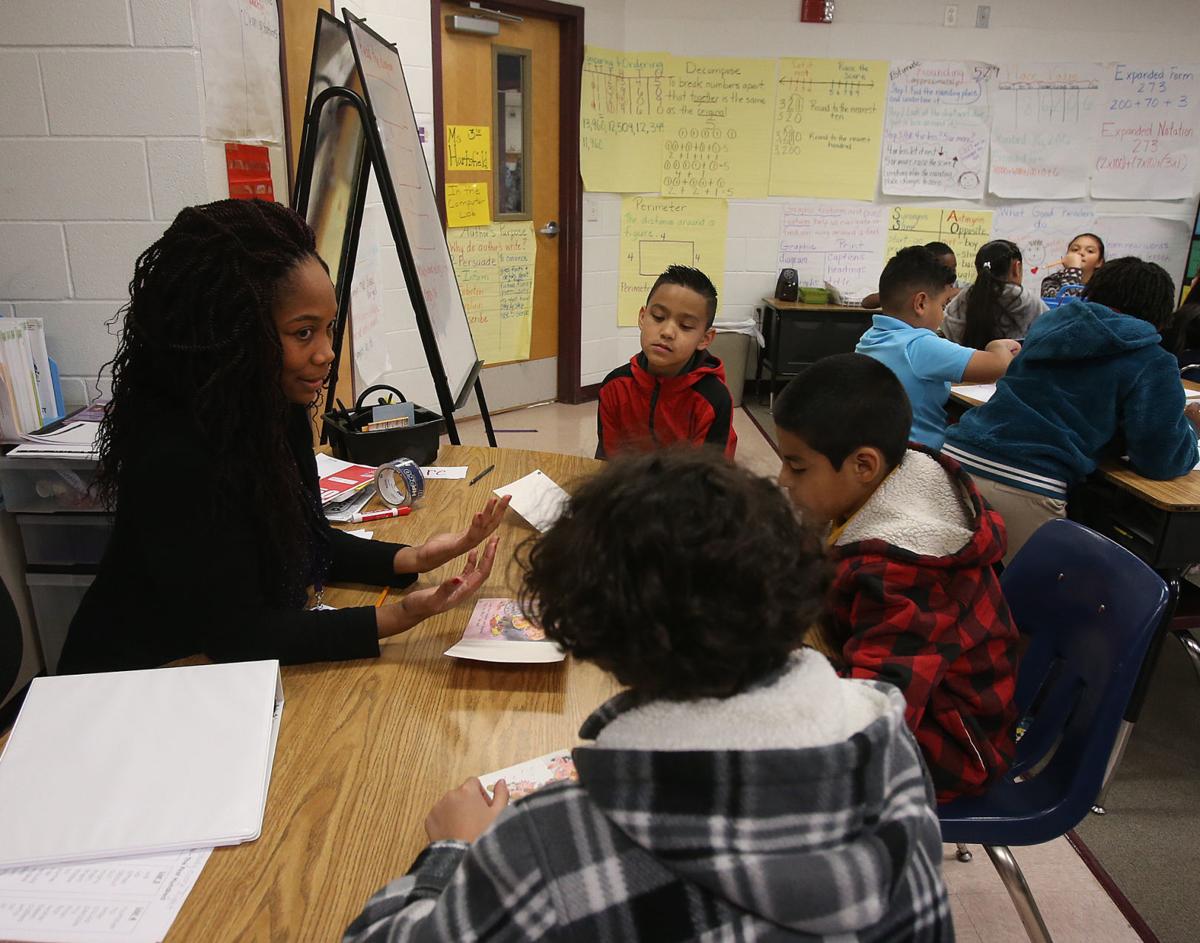 Marlin Elementary School reading specialist Demetrium Smith works with his students on learning how to pronounce letters properly, which enhances their reading skills.

Marlin Elementary School reading specialist Demetrium Smith works with his students on how to pronounce letters properly, which enhances their reading skills.

The Marlin Independent School District has not met state student academic standards since 2010, longer than any other school district in Texas.

Since then, the district’s student population has shrunk by more than 200 students, while more students transfer out of the district each year. The Texas Education Agency has intervened in an effort to improve student academic performance, beginning in 2015 with an agreement between the agency and the district to keep Marlin ISD open, despite failing standardized test scores.

On Nov. 20, the state-appointed board of managers that replaced the elected board of trustees in 2017 unanimously approved another abatement agreement to keep Marlin schools open for at least one more school year.

But that does not give state-appointed Interim Superintendent Jean Bahney and the teachers in Marlin ISD much time to prepare students for the State of Texas Assessments of Academic Readiness, which begin in the spring. How students perform on those tests could determine whether the district closes.

The decision rests with Texas Education Commissioner Mike Morath, who was appointed to the position by Gov. Greg Abbott in January 2016 and unanimously confirmed by the Texas Senate in March 2017.

Morath visited Marlin ISD schools Monday with a team of TEA staff. The TEA is currently evaluating the accreditation status of the district based on students’ performance on last year’s state standardized exams. The district received an F rating in August based on last year’s scores.

Morath revoked Marlin ISD’s accreditation for the 2018-19 school year in February based on the prior year’s ratings, but the abatement agreement puts that accreditation revocation on hold, pending the district’s 2019 academic and financial accountability ratings, the agreement states.

“These issues all stem from inadequate instructional leadership at the administrative level,” he said. “My team saw very large gaps in student knowledge for kids, regardless of age. My team also saw evidence of actions taken in the last few months by the interim superintendent to address those gaps.”

Only Kendleton ISD was closed based solely on academic issues. It merged with Lamar Consolidated Independent School District, but Kendleton had 75 students enrolled in grades prekindergarten through fifth at the time of its closure, which is not comparable to Marlin, which had an enrollment of 880 last school year.

Meanwhile, Bahney has focused on improving teacher professional development and standardizing and updating curricula throughout the district. She said the district is employing “diagnostic teaching,” which means teachers use student performance data to determine how they teach the next lesson or whether students understood the lesson just taught.

One room in Marlin Elementary School is dedicated to displaying this student performance data so teachers can compare and share techniques — something that has never been done in the district before, Bahney said.

The interim superintendent sent Demetrium Smith, who is in his third year in Marlin, to training at the Neuhaus Education Center in Bellaire for dyslexia training, where he learned tips to help students read better. Smith works with students in kindergarten through second grade with phonics, or how to properly pronounce letters and syllables.

“Once they have that down, they can then get pushed back into the classroom,” he said.

Smith also helps older students in the elementary school who need the additional lessons, whether they have dyslexia or just need assistance with their reading skills. As a reading specialist, he works with other elementary school teachers, as well, by sharing his new set of skills, particularly with phonics because that is the foundation of how students learn to read, he said.

“This is so much more intensive than anything ever done in Marlin before,” Bahney said.

Smith said he wants other teachers to receive the same training he did so everyone is working toward the same goals using the same methods.

“It’s going to take some time. If everybody gets on the same program and everybody is teaching the same way, I believe that we can definitely move forward in a more productive way,” he said. “I feel like all the teachers just need to be praised for doing the best they can do because I know from the beginning of the school year until now, we’ve been working very hard. Most of the outside community that’s looking into Marlin just have to realize that this is all new to a lot of teachers here.”

On Tuesday, the elementary school will hold a literacy night from 5 to 6:30 p.m. Students and their families can curl up with a good book and hot chocolate and visit the school book fair.

Kristina Sanchez may be new to Marlin ISD, but this is her 30th year teaching. She previously taught in California and Austin, but when she heard about Marlin’s new math program, she was eager to put her skills to use in a smaller district. She serves as the math instructional specialist at the elementary school.

On a Wednesday morning, Sanchez helped a small group of first grade students learn how to represent two-digit numbers with blocks. Other days she works with fourth and fifth grade students who struggle with double-digit multiplication. She said she sees students make progress every week.

Like Smith, Sanchez works with other teachers on how to implement the best practices to teach students math skills during teachers’ professional learning community periods, which are also new to the district. A professional learning community is a group of teachers who regularly meet to share expertise and work together to improve student academics.

“Change is scary sometimes, but the teachers here are very committed,” Bahney said. “They’re really working hard to learn other things that will benefit our students.”

According to a new tool developed by Stanford University, Marlin ISD had the lowest average tests scores in the state from 2009 to 2016. The district’s average test scores were 2.93 grade levels below the national average, according to the report.

Sean Reardon, professor of education at Stanford who helped develop the Educational Opportunity Project, said that means Marlin ISD students do not receive many educational opportunities prior to third grade. Marlin’s average test scores are worse than districts with similar socioeconomic status. Almost all students in Marlin ISD are considered economically disadvantaged by the state.

But Marlin ISD students learn about 3% more each grade than the U.S. average, according to the report. In general, the district’s learning rates are 9.52% higher than those of districts with a similar socioeconomic status.

“The learning rates are relatively average for the country. What that means is that kids in Marlin in third grade come in with very low academic performance, and in eighth grade they have low academic performance,” Reardon said. “It isn’t clear if you should attribute the really low test scores to the schools or other factors, but doing an average job doesn’t help them catch up to their peers in other places.”

“That runs the risk of either blaming the schools for larger problems in kids’ lives or maybe absolving schools of problems,” he said. “It runs the risks of mischaracterizing schools’ quality.”

Regardless, Marlin ISD must meet state accountability standards this school year, which are largely based on standardized exam scores. But for Bahney and other teachers, the daily mission of educating is what matters.

The TEA 2018-19 student transfer report shows 319 students transferred to other school districts or charter schools, with most students transferring to Riesel or Chilton ISD. That is about 27% of Marlin ISD's student population base.