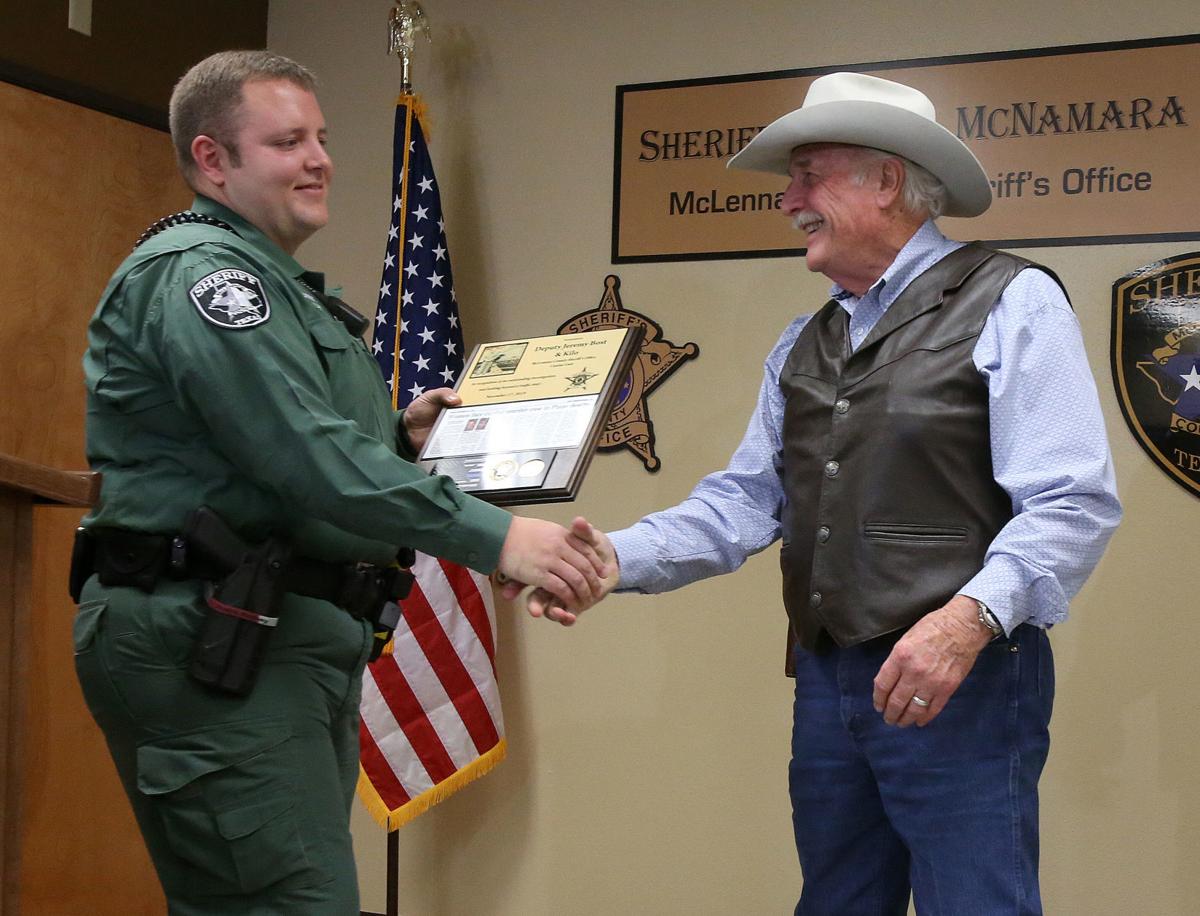 Deputy Jeremy Bost (left) shakes hands with McLennan County Sheriff Parnell McNamara after he was honored Friday with an award for his work that led to the arrest of two Plano murder suspects. 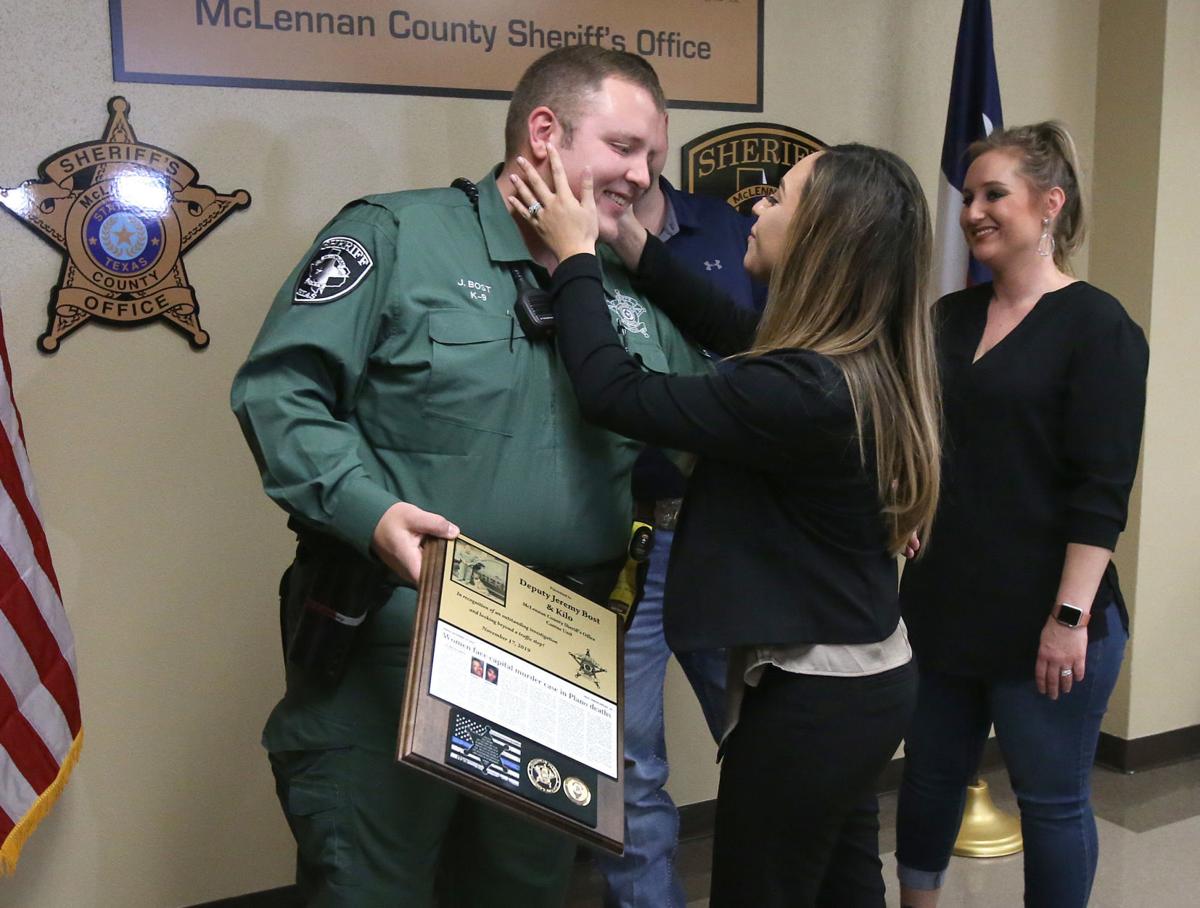 McLennan County Sheriff’s Office Deputy Jeremy Bost is embraced by his wife, Ermelinda Bost, after a ceremony at the sheriff’s office Friday. Bost was recognized for the November traffic stop that led to the arrest of two women suspected of killing two people during a robbery in Plano. 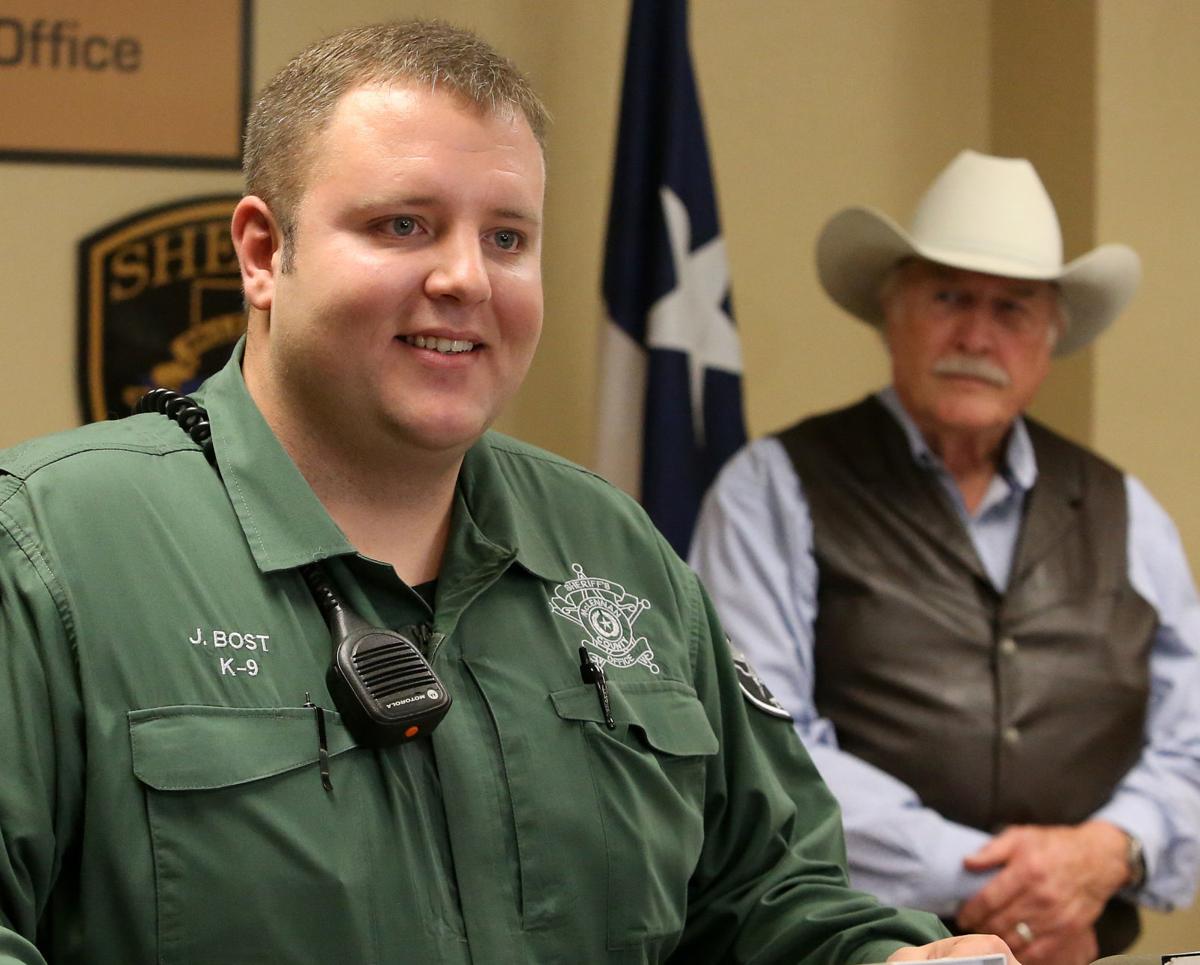 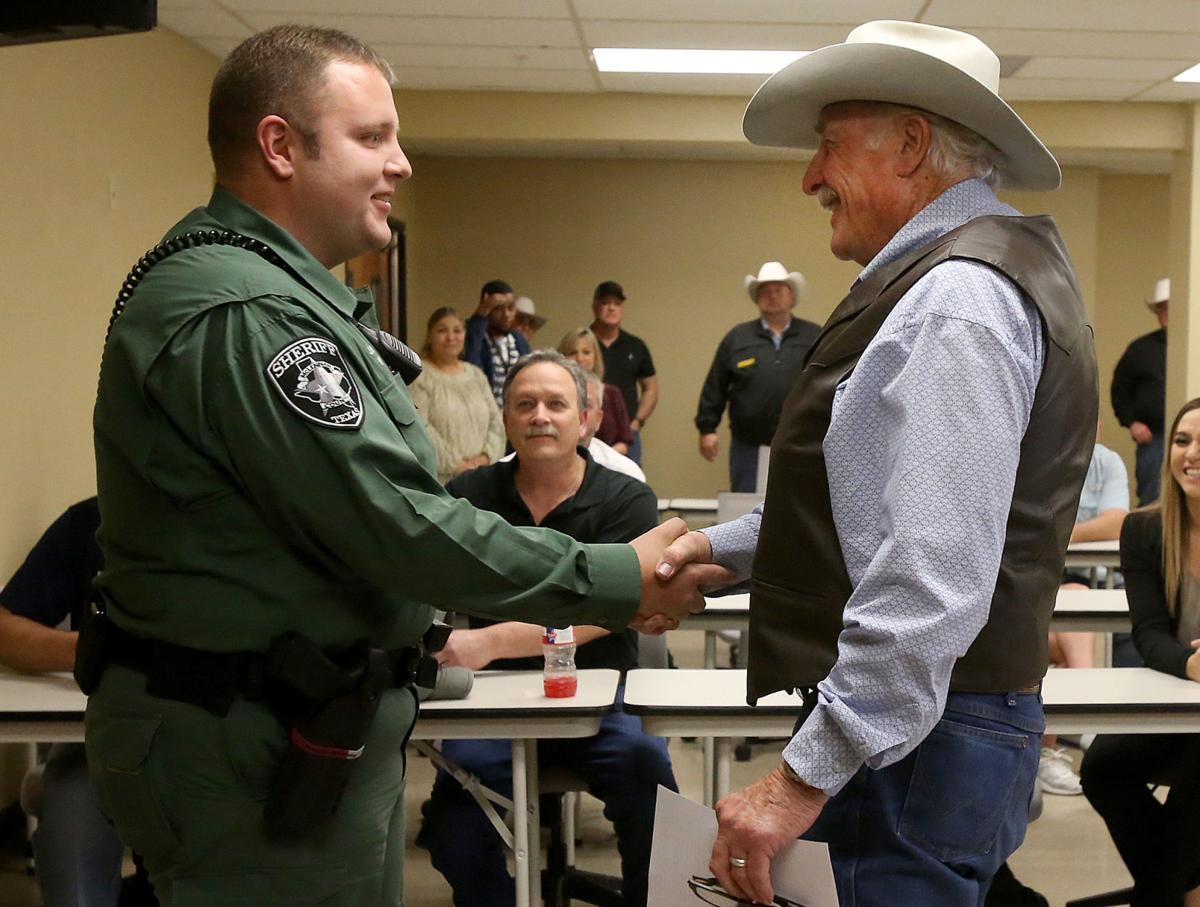 Deputy Jeremy Bost (left) shakes hands with McLennan County Sheriff Parnell McNamara after he was honored Friday with an award for his work that led to the arrest of two Plano murder suspects.

McLennan County Sheriff’s Office Deputy Jeremy Bost is embraced by his wife, Ermelinda Bost, after a ceremony at the sheriff’s office Friday. Bost was recognized for the November traffic stop that led to the arrest of two women suspected of killing two people during a robbery in Plano.

Call it luck or police intuition, but McLennan County Sheriff’s Office Deputy Jeremy Bost said he is thankful the biggest traffic stop of his tenure thus far led to the arrest of two Plano murder suspects in November.

“It was all luck,” Bost said. “I was in the right place at the right time and I saw some things that stood out to me.”

McLennan County Sheriff Parnell McNamara and the Sheriff’s Law Enforcement Association of McLennan County gathered Friday and honored Bost for his police work in the Nov. 17 apprehension of Cynthia Alixandra Wingate, then 29, of Mission, and Carmen Abigail Moreno, then 23, of Rio Grande City. Both women have been charged with capital murder in the deaths of Theresa Ann Coomes, 71, and Jimmy Michael Farris, 72, who were found dead in their Plano apartment.

McNamara credited Bost with uncovering the double homicide in Plano before the bodies of Coomes and Farris had been found.

“Both of them had been brutally slaughtered, multiple stab wounds, their throats slit, a horrible murder scene,” McNamara said. “The Plano police got back with our guys on the side of the road, they made the arrest, they interrogated these individuals and they basically solved two horrible murder cases that night before anyone had even known they had happened.”

Bost initially stopped Wingate on Interstate 35 near Bruceville-Eddy for committing a traffic violation in a vehicle that turned out to be registered to one of the victims. He placed Wingate in handcuffs after seeing blood on her jacket. Moreno pulled up a short time later in a second vehicle, and deputies also observed blood on her.

“I told my corporal something wasn’t right, and it turns out there were two things not right,” Bost said. “I am still speechless, really, about what occurred and how it played out.”

Bost, the office’s K-9 handler, and other deputies assisting in the traffic stop uncovered evidence including the bloody clothing, a bloody knife and documents from the two victims in Plano.

Bost, who has been with the sheriff’s office 3-and-a-half years and in law enforcement 9 years, arrested both women the night of the traffic stop on on various charges, and Plano police later field murder charges.

“Excellent police work, along with a lot of luck, was involved in this,” McNamara said. “There were cold-blooded killers that had possibility killed just 2 hours before.”

Plano authorities reported that the slayings happened during the commission of a robbery, making the alleged offense capital murder.

Bost was allowed to serve the capital murders warrants on Wingate and Moreno on behalf of Plano police, he said.

“I’ve talked to several people who said that this was probably my career bust, you’ll never find anything better,” Bost said. “My only response was I’m going to try.”