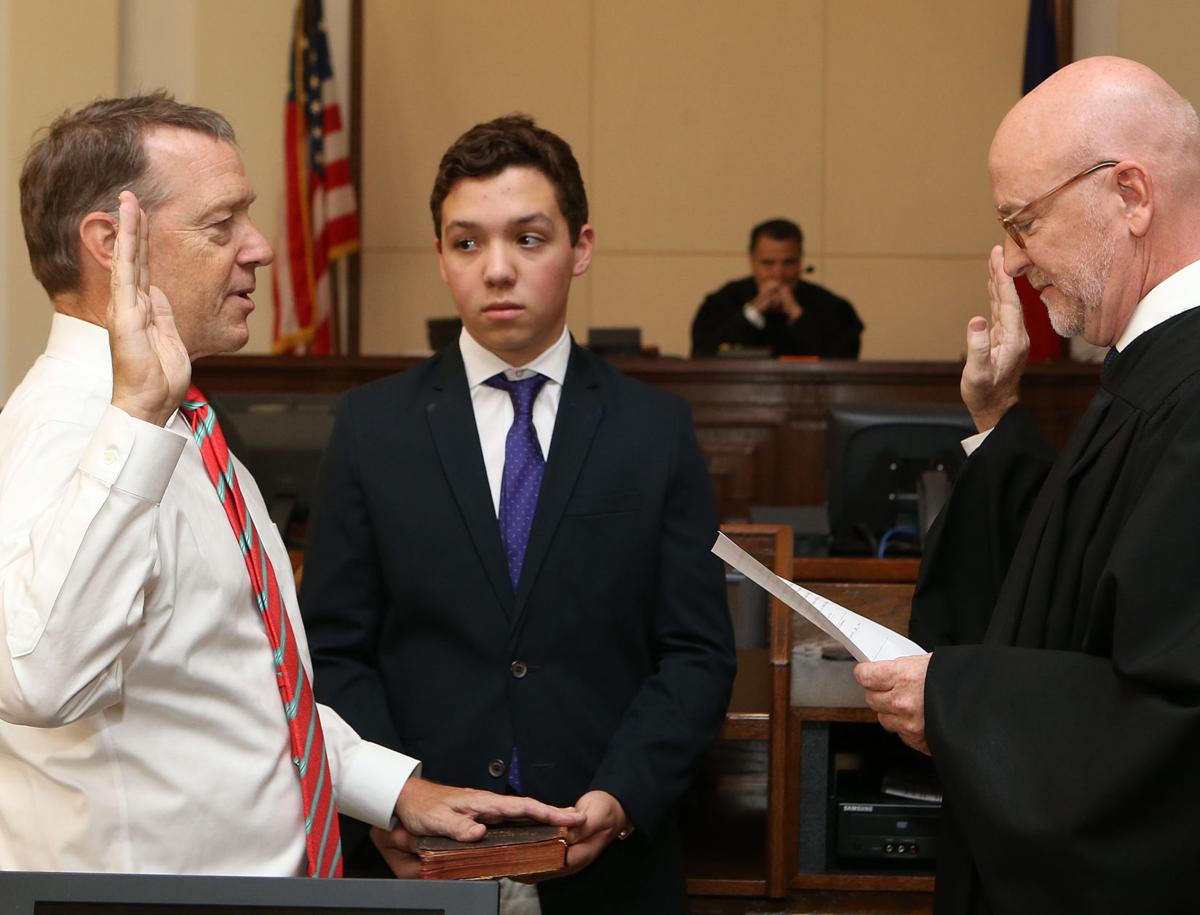 Alan Albright (left) takes the oath of office from U.S. District Judge Robert Pitman as one of Albright’s sons, Grayson, watches Tuesday at the federal courthouse in downtown Waco. 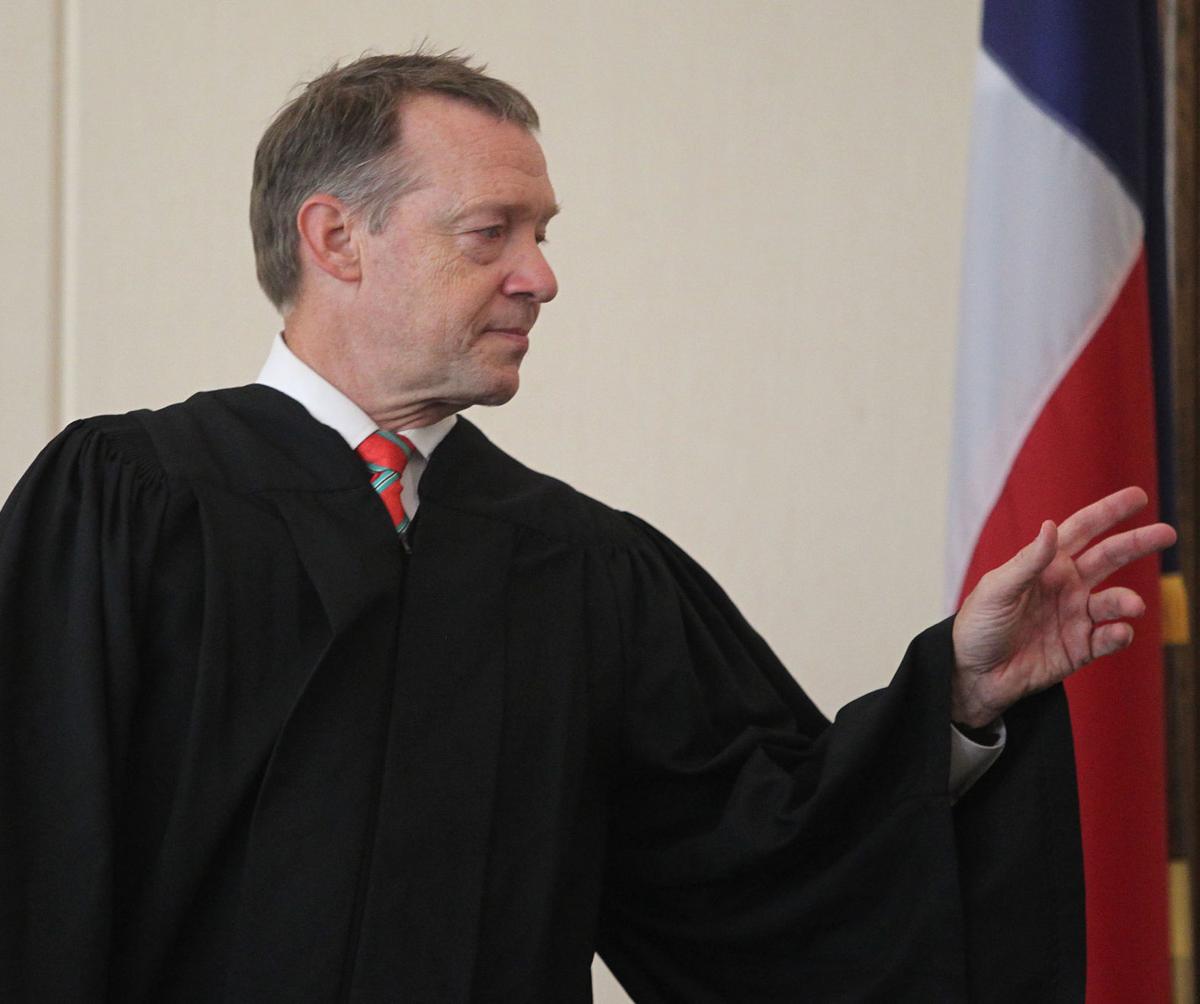 Judge Alan Albright looks over to his two sons while speaking to guests at his swearing-in ceremony Tuesday. 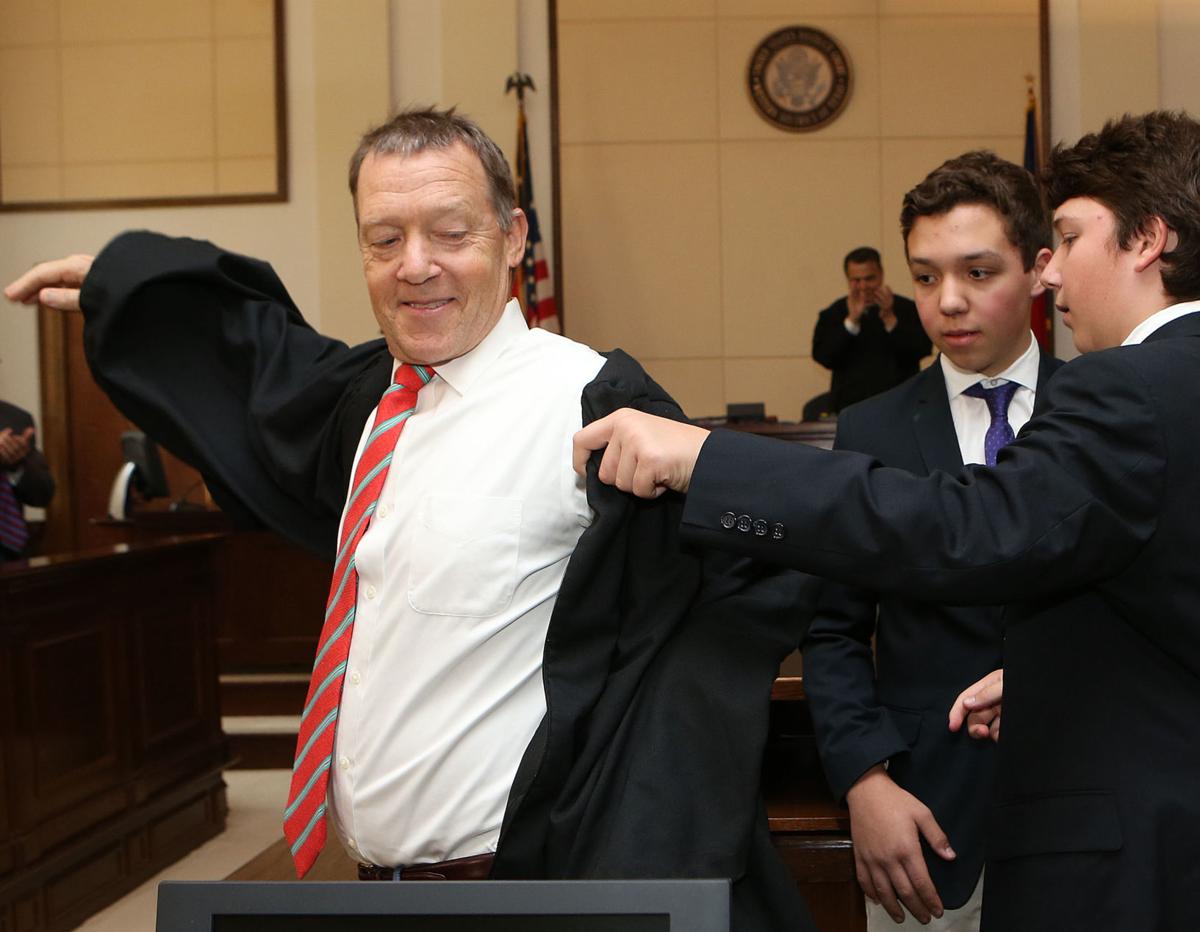 U.S. District Judge Alan Albright gets help putting on his robe from his sons, Grayson (center) and James, after he was sworn in Tuesday.

Alan Albright (left) takes the oath of office from U.S. District Judge Robert Pitman as one of Albright’s sons, Grayson, watches Tuesday at the federal courthouse in downtown Waco.

Judge Alan Albright looks over to his two sons while speaking to guests at his swearing-in ceremony Tuesday.

U.S. District Judge Alan Albright gets help putting on his robe from his sons, Grayson (center) and James, after he was sworn in Tuesday.

Alan Albright paused a moment to gather his emotions Tuesday before joking to the crowd gathered to welcome him as Waco’s new federal judge that it was “actually a very happy moment.”

He was sworn in by U.S. District Judge Robert Pitman before a standing-room-only crowd in the main courtroom at the federal courthouse in downtown Waco.

Pitman, who served as U.S. Attorney for the Western District of Texas while Albright was a federal magistrate in Austin, was probably the second happiest man at the ceremony. Pitman has been driving back and forth from Austin to handle the majority of the Waco federal court docket since the retirement of U.S. District Judge Walter S. Smith Jr. in September 2016.

Smith, who served 32 years as Waco’s federal judge, retired after he was sanctioned by the 5th U.S. Circuit Court of Appeals, which concluded Smith made unwanted sexual advances against a female court employee in his chambers in 1998 and lied to investigators about it.

Albright, 58, said he is “unbelievably honored” to be appointed to the federal judiciary and said he is pleased his two sons, James, 17, and Grayson, 16, were on hand for his swearing in.

“I know this is an incredibly important position,” Albright said. “The Senate certainly made sure I knew that. But I want you to know that I am just holding this position. I serve you all.”

He said the first question he was asked by a room full of 35 lawyers who were vetting his nomination was what a “carpetbagger” such as himself could do to win the acceptance of the Waco community. He said he hopes that acceptance will come by the way he comports himself and treats people inside and outside his courtroom.

“I want every lawyer to think this is the kind of place they want to try a case,” Albright said. “I want to be known as a trial lawyer’s judge and I pledge to be fair, unbiased and impartial. I plan to live here the rest of my life and I look forward to serving this community very much.”

Albright will get to work immediately, meeting with Pitman the rest of this week to work out schedules and caseloads. Albright said Pitman will continue presiding in Austin over the multi-plaintiff Title IX lawsuits brought by women who allege they were sexually assaulted while students at Baylor University.

Albright said he likely will commute from Austin to Waco for the next couple of years until his sons graduate from high school. After that, he plans to move to Waco.

Judge Orlando Garcia, of San Antonio, chief judge for the Western District of Texas, presided over the swearing-in ceremony and thanked Pitman and U.S. Magistrate Jeffrey Manske, of Waco, for taking on extra duties to keep the Waco docket moving after Smith’s retirement.

He said Albright is a man of “honor, great integrity and judicial temperament.”

Albright, a partner with the Bracewell law firm in Austin, was born in Hershey, Pennsylvania, and moved to San Antonio with his family when he was 5. He grew up in San Antonio and graduated from Trinity University and the University of Texas Law School, where he also was an adjunct professor.

He served as a federal magistrate in Austin from 1992 to 1999 before going to work at Bracewell, where he specialized in patent litigation.

While in law school, Albright worked as a law clerk for Senior U.S. District Judge James R. Nowlin, of Austin.

“Alan is exceptionally smart,” Nowlin said after Albright’s confirmation. “He is a voracious reader and, yes, he is a pretty normal person. He is a big runner. When he worked for me, he ran, he rides bikes, he is a big exercise freak. But above all, he is a really good guy with a great sense of humor. He has a very even temper and he is exceptionally bright in the law. I think he will be a great judge.”

“An experienced civil litigator and former federal magistrate judge, Alan Albright will be an excellent addition to the district court,” Cornyn said in a statement after the confirmation.

As the dust settles from the 2018 midterm elections, a potential shake-up of unprecedented proportions is brewing quietly around the historica…