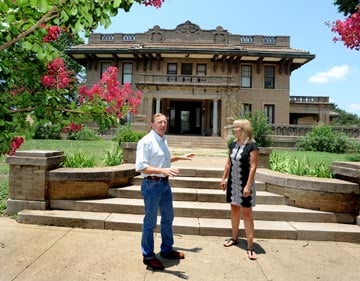 Robert and Kitty Tunmire stand in front of the Migel house at 1425 Columbus Ave., which they bought Friday along with the old Shear-Callan house next door. The couple plans to turn the Migel house into a reception center and inn. 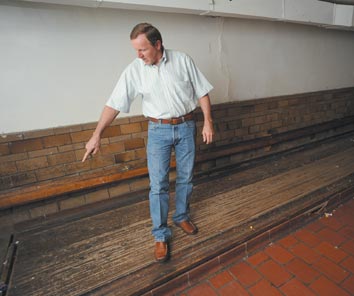 A large basement in the Migel House features a compact bowling alley, which new owners Robert (above) and Kitty Tunmire said they plan to restore. 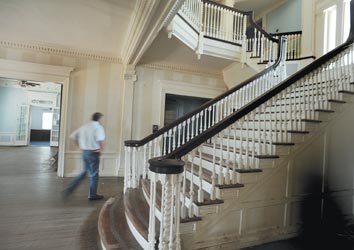 The Migel house was built in 1910 for Nelson Smith.

Robert and Kitty Tunmire stand in front of the Migel house at 1425 Columbus Ave., which they bought Friday along with the old Shear-Callan house next door. The couple plans to turn the Migel house into a reception center and inn.

A large basement in the Migel House features a compact bowling alley, which new owners Robert (above) and Kitty Tunmire said they plan to restore.

The Migel house was built in 1910 for Nelson Smith.

Some might have written off the twin mansions recently vacated by the Freeman Center drug treatment program as white elephants: too big and needing too much renovation for anyone to buy them.

But Robert and Kitty Tunmire just proved them wrong.

The Tunmires closed Friday on the Louis Migel and Shear-Callan houses on the 1400 block of Columbus Avenue, which together offer more than 24,000 square feet of space and a trove of historic architecture.

Robert Tunmire, executive vice president of The Dwyer Group, said they will begin renovating the tan-colored Migel house this summer.

The couple plan to create a reception center on the first floor and upscale lodging upstairs that would be managed by the nearby Camille House Bed and Breakfast.

“I’d say it’s in part a business deal, but also a project my wife and I feel we would enjoy doing,” Robert Tunmire said. “I do believe downtown Waco in the future is going to be a very good place to invest in and be around.”

The Tunmires gave a brief tour of the Migel house Friday afternoon after the closing.

“It’s going to be fun,” said Kitty Tunmire, turning the corner of a staircase under a giant stained-glass window.

She added, jokingly, “We’re going to wake up in the morning and say, ‘What hit us?’ ”

The Tunmires haven’t decided what to do with the Shear-Callan house at 1401 Columbus, which is the larger of the two houses at 13,000 square feet and in need of more renovation.

Robert Tunmire said the seller, the Houston-based Cenikor Foundation, was determined to sell both houses.

“They made it so attractive that we couldn’t walk away,” he said.

Cenikor took over the houses after it teamed with the Freeman Center to create a new substance abuse rehab center at the former Hillcrest Baptist Medical Center campus in North Waco.

Coldwell Banker Jim Stewart Realtors had listed each house at $199,000, but Robert Tunmire said the final price was much lower. Still, he expects renovation costs will be several times the selling price.

Both houses are considered among Waco’s historic jewels, designed by notable architect Milton Scott in the prosperous years before World War I. Around the same time, Scott designed landmark buildings such as the Dr Pepper plant and the old Waco High School.

The Migel House was built in 1910 for Nelson Smith, who quickly sold it to Louis Migel, co-owner of the Goldstein-Migel department store.

Robert Tunmire said he and his wife were dreaming of buying a house in downtown Waco and fell in love with the Migel house.

The interior of the house is richly detailed with carved oak walls and doors, hand-painted canvas wallpaper and marble fireplaces upstairs and downstairs. A large basement features a compact bowling alley the Tunmires plan to restore.

“There are a lot of special homes in Waco, but this is one you have to walk through so many times before you notice everything,” he said.

Freeman Center officials operated the homes with a meager budget but took care to preserve the architectural details and made sure whatever additions they made were reversible.

“I was shocked when we walked in here,” Tunmire said. “I thought the inside would all be demolished.”

The Tunmires at first considered living at the house, but in recent weeks decided they’re not ready to leave the 20-acre spread off Gholson Road where they raised their four children.

They decided to turn the upstairs into a residential space where they would want to live but lease it out as suites.

They talked to Ronnie and Michael Fanning, who converted another former Freeman Center rehab facility into the Camille House Bed and Breakfast a couple of years ago.

They agreed to let the Fannings lease out the upstairs rooms for events such as weddings and to run the downstairs for receptions.

“It’s a great location for weddings and receptions because of all the different churches around,” Michael Fanning said. “If you did wedding receptions and had the ability to stay there overnight, it would work well. It’s such a pretty area. You could have outside weddings or inside weddings.”

Fanning said he was pleasantly surprised to see the houses pass into the hands of someone with the vision and means to make them something special.

“Our concern was what was going to happen to those properties,” he said. “They were so big and had so much potential. We were afraid they were going to sit there decaying and not being revitalized. . . . We’ve walked through the house with Robert and Kitty, and our opinion is that they could make this a beautiful place again with a little bit of money.”

Historic Migel mansion under contract to be sold

The Migel House, built in 1910 at 1425 Columbus Ave. and fresh off a $1 million upgrade, is under contract to be sold to an out-of-town buyer.

The grand mansion at 1425 Columbus Ave. in Waco is a stunning example of the years when opulence included a carriage house, a bowling alley in…