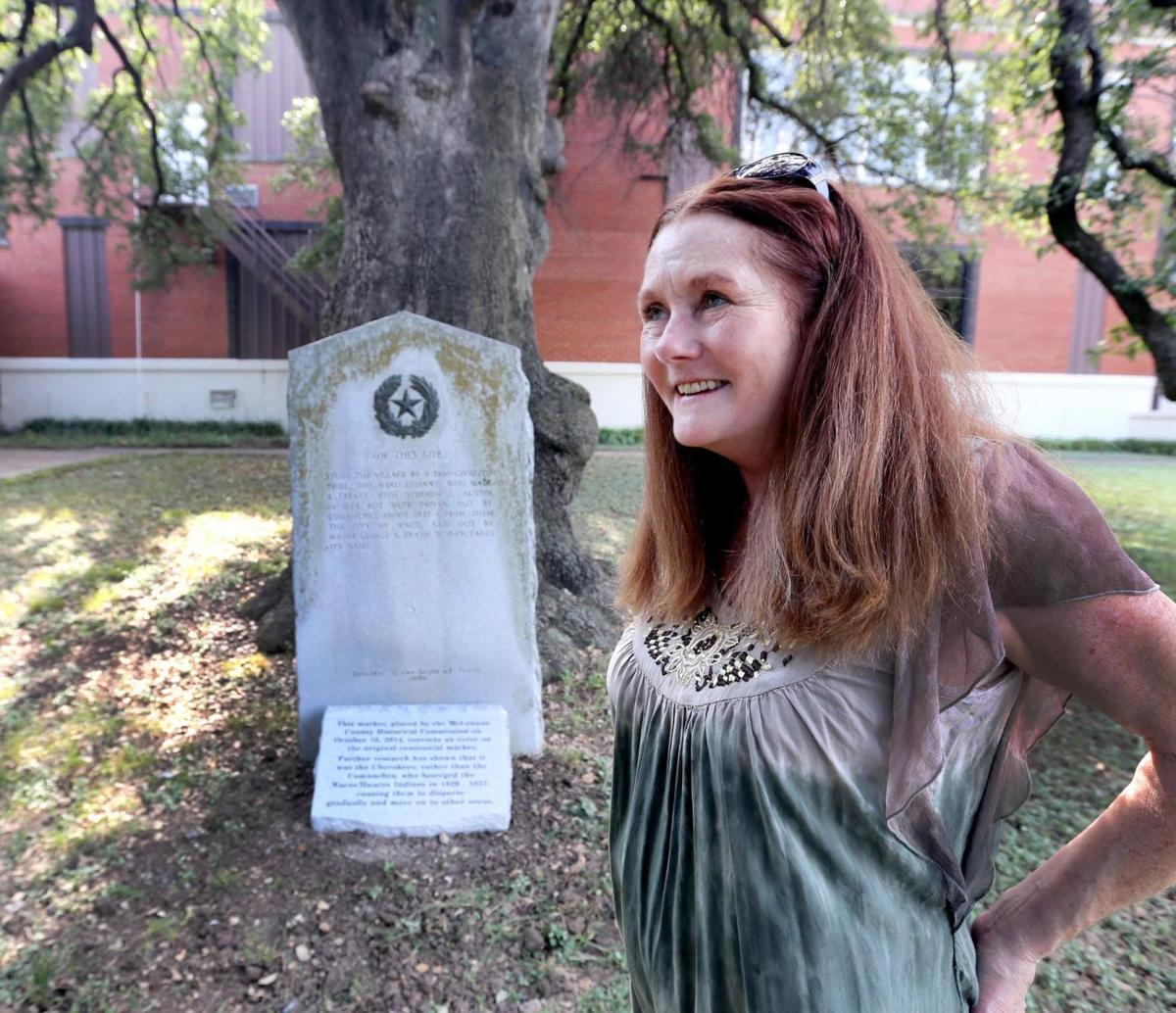 Linda Pelon, a McLennan Community College history instructor who is involved with the visit of the Wichita tribal leaders, says the new stone at the bottom of the old Waco Indian historical marker helps set the record straight. 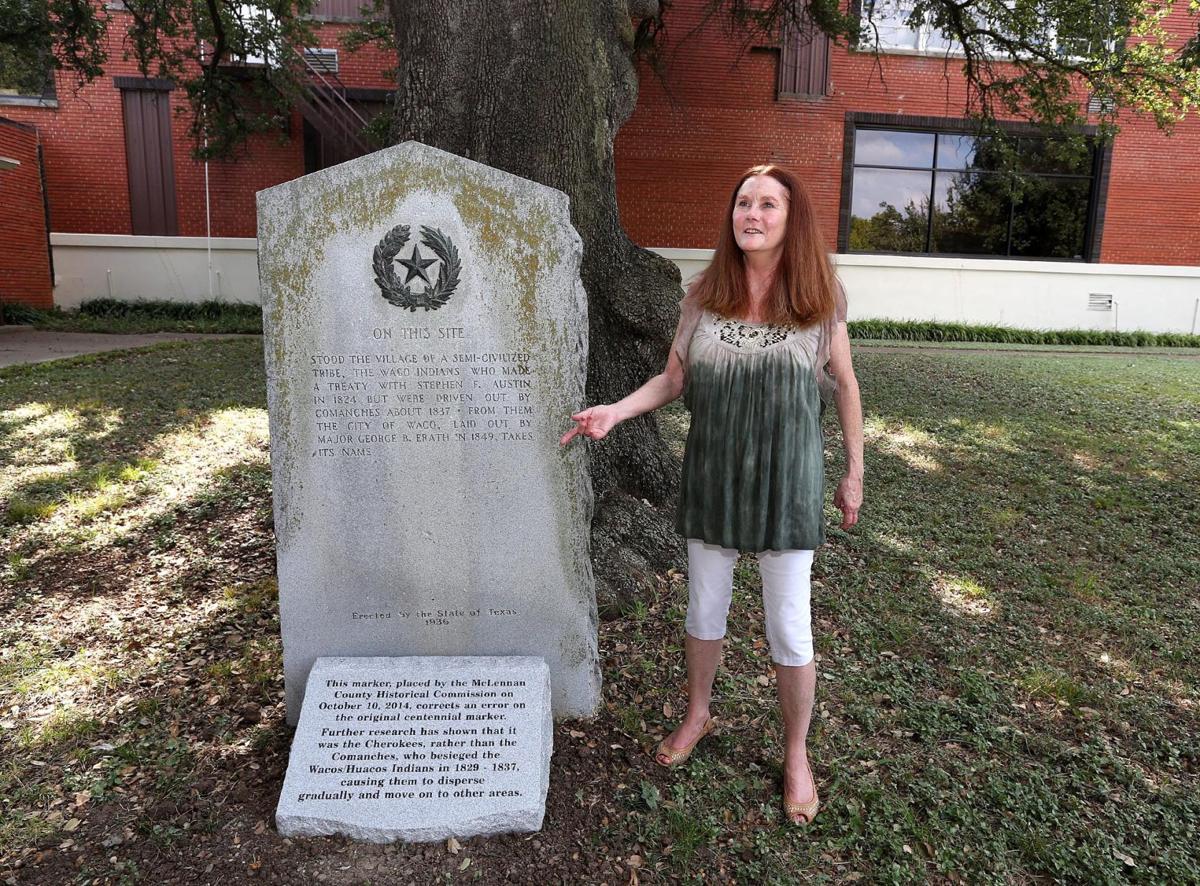 MCC historian Linda Pelon talks about errors in the original Waco Indian village marker and about the new marker added to the base. Pelon is helping to host Wichita Indian tribal leaders who will participate this week in the site’s rededication. 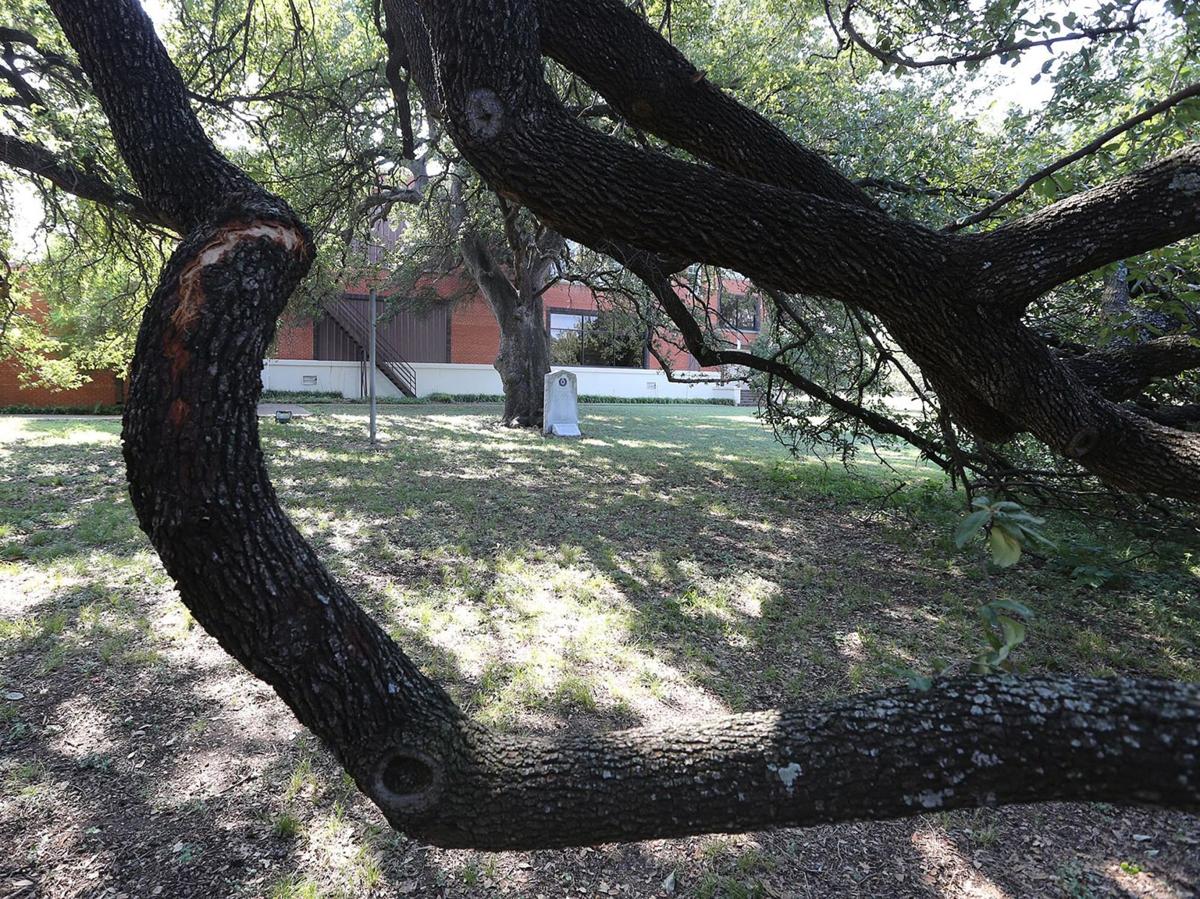 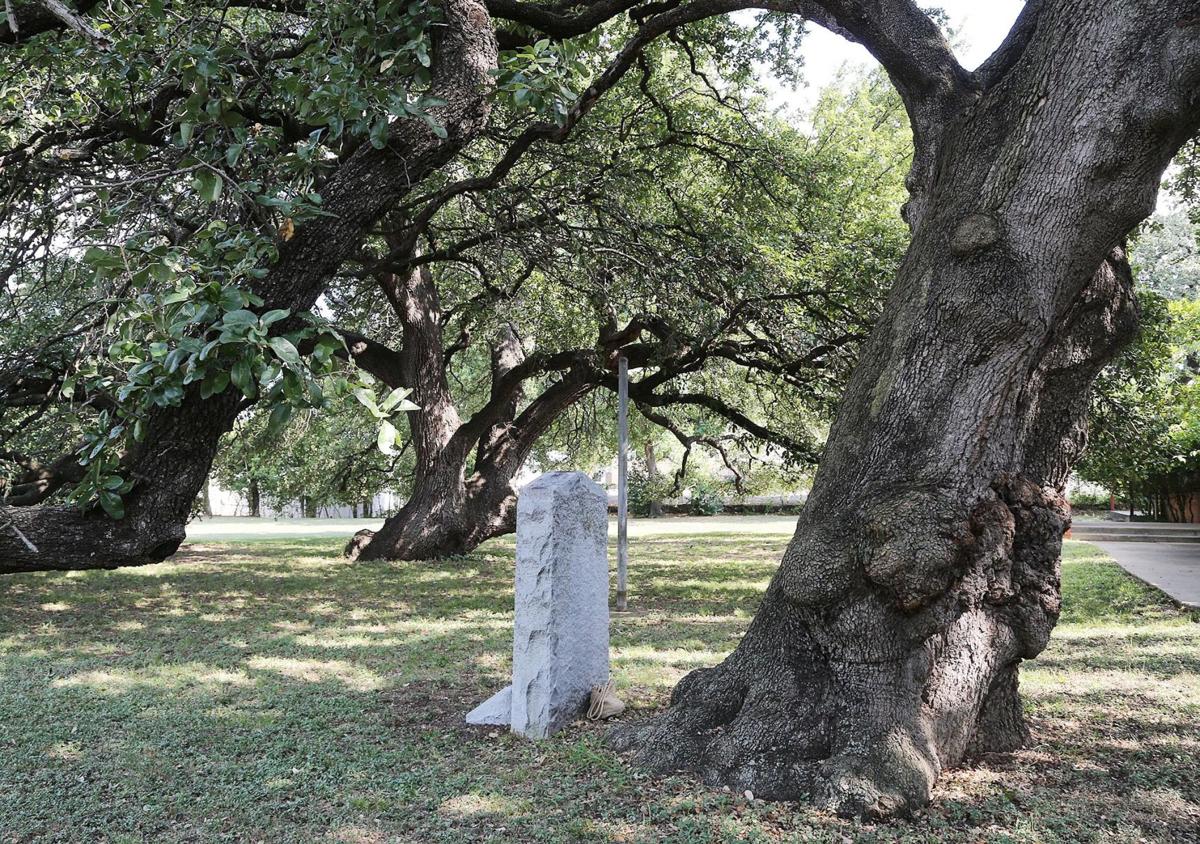 A grove of majestic live oaks at the Waco Indian marker site will be dedicated as historic trees during a ceremony on Friday.

The original 1936 Texas historic marker incorrectly states that the Comanche Indians drove out the Wacos. A new marker installed at the base of the old marker corrects that statement.

Linda Pelon, a McLennan Community College history instructor who is involved with the visit of the Wichita tribal leaders, says the new stone at the bottom of the old Waco Indian historical marker helps set the record straight.

MCC historian Linda Pelon talks about errors in the original Waco Indian village marker and about the new marker added to the base. Pelon is helping to host Wichita Indian tribal leaders who will participate this week in the site’s rededication.

A grove of majestic live oaks at the Waco Indian marker site will be dedicated as historic trees during a ceremony on Friday.

A historical error etched into stone 78 years ago at Waco’s most ancient site is finally getting fixed.

A state historical marker below massive oaks at 701 Jefferson Ave. memorializes the village of the Waco Indians, stating that the “semi-civilized tribe” was “driven out by Comanches about 1837.”

That didn’t sound right to a Comanche official who was touring Waco a couple of years ago. Though widely feared as “Lords of the Plains” in 19th-century Texas, the Comanches were trading partners with the Wacos.

It was a very different tribe, the Cherokees, that feuded with the Wacos and caused them to abandon their village here, according to several historical accounts.

Now the McLennan County Historical Commission has set the record straight with a corrective marker installed this week just below the old granite marker. The commission will join Waco-Wichita tribal leaders from Oklahoma to dedicate the new marker at 11 a.m. Friday, following a 10 a.m. dedication of the ancient live oak grove by the Texas Historic Trees Coalition.

The site is on the grounds of the Helen Marie Taylor Museum of Waco History. Taylor, the museum’s benefactor, is expected to attend the event.

Ken Brittain, vice president of the county commission, said the group is working to fix errors on other markers and to rescue or replace markers that have been damaged, stolen or forgotten.

Brittain said he’s interested in meeting Wichita tribal leaders at Friday’s ceremony. The Wacos were among several tribes in the “Wichita Confederation” and merged with the Wichitas in the mid-19th century before the Wichitas were expelled to Oklahoma.

“At this point, I’d like to know how much they remember about that situation, and if they had anyone in that organization (whose ancestors) actually lived in the Waco area,” Brittain said.

The process started in 2012, when a Comanche tribal preservation officer, Jimmy Arterberry, of Lawton, Oklahoma, was visiting Waco as part of an archaeological event at McLennan Community College.

Linda Pelon, an MCC historian who helped host the Comanche visitors, took Arterberry to various sites of interest to Comanches, including the Waco Indian village marker that mentioned the Comanche driving out the Wacos.

“We had Jimmy going: ‘Hey, we didn’t do that. Those people were our friends,’ ” Pelon said. “One thing for him as a tribal preservation officer is that he wants history to be accurate. So do I. We have a lot of wrong markers and a lot of racially biased markers.”

The old marker reads as follows:

“On this site stood the village of a semicivilized tribe, the Waco Indians, who made a treaty with Stephen F. Austin in 1824 but were driven out by Comanches about 1837. From them the city of Waco, laid out by Major George B. Erath in 1849, takes its name.”

The facts of the Wacos’ departure from their village here is still somewhat mysterious, said Earl Elam, a historian at Hill College and author of “Kitikiti’sh: The Wichita Indians and Associated Tribes in Texas, 1757-1859.”

Elam said the Wacos migrated up the Brazos River and joined forces with related Wichita Confederation Indians, but it is unclear whether it was sudden or gradual.

“The historical record is silent as to what happened,” he said. “I was not able to pinpoint the precise time when movement away from that Waco site began. My conclusion is that they were pretty much gone by 1830 or 1831.”

But he said the marker is clearly wrong to blame the Comanches. Also, contrary to the marker, he has seen no evidence that the Wacos ever signed a treaty with Austin, the founder of the first Anglo-American colony in Texas.

An 1824 letter to Austin from an early colonist, Thomas Duke, described the Waco village as having about 100 warriors and fields with “about 400 acres planted in corn, beans, pumpkins and melons, and that tended in good order.”

By the time Austin sent an expedition of Texas Rangers here in 1837 to establish the short-lived Fort Fisher, the Rangers reported that the village was vacant.

Historical accounts from the 19th century, drawing largely on oral sources, allege that a band of Wacos wandered north to a Cherokee encampment on the Red River and stole their horses in winter of 1828. The Cherokee recently had arrived from the Southeast, a few years ahead of the tribe’s forcible removal by the U.S. government.

In spring 1829, the Cherokees retaliated by sending 55 warriors armed with guns to attack the Wacos, according to “Indian Wars and Pioneers,” written in 1896 by John Henry Brown.

The Wacos suffered 55 deaths, but they were saved by mounted warriors from a neighboring village of Tehuacana Indians, to whom they were kin.

Elam said the Waco village was among several villages of related Wichita-group Indians, and they appear to have been practically indistinguishable from the Tehuacana.

By 1855, those groups had merged with the Wichita at a reservation upstream on the Brazos River, but Confederate officials soon exiled the Wichita to Oklahoma during the Civil War. Today, tribal leaders refer to the period between the 1820s and 1930s as the “days of darkness.” Since the 1930s, the Wichita and Affiliated Tribes have been organized under a tribal government in Anadarko, Oklahoma.

Tribal president Terri Parton and former president Gary McAdams will join Elam for a panel discussion on Waco Indian heritage in Central Texas at 6 p.m. Thursday at MCC’s Michaelis Academic Center, followed by the marker dedication the next day.

Pelon said she is pleased to see Texas communities reconnecting with the tribes that once inhabited the state.

“This is the first generation of scholars who can bring Indians back to Texas,” she said.

What: Dedication of historic trees and addition to Waco Indian Village marker

The site of the old Torrey’s Trading Post No. 2 is today nothing more than a brushy hilltop five miles east of Waco, visited by more buzzards …

It didn’t take James “Bunny” Ross long in Waco to recognize it as sacred ground.