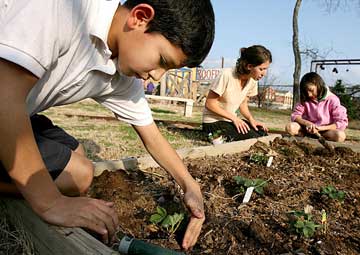 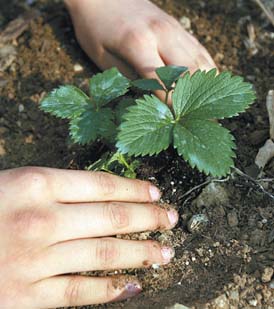 If you’re without a car in the Brook Oaks neighborhood just north of downtown, buying a head of lettuce can be a daunting task.

From the Villages apartments at 1100 N. Sixth St., it’s two miles to the nearest grocery store, the SuperPlaza on North 25th Street.

A round trip on a city bus will take an hour of travel time if you time it just right. Walking would take longer and might mean lugging groceries in the Texas heat.

Hunger advocates said people in such areas are in a food desert.

The 2008 Farm Bill defines a food desert as a residential area, usually low-income, with “limited access to affordable and nutritious food.”

“It has entered the vocabulary,” she said. “It may be an ill-defined term, but everybody can identify areas that are food deserts, and you know what they’re talking about.”

Herbert and Mayor Jim Bush are part of the McLennan County Food Planning Task Force, which is studying hunger and food access issues. The task force includes the Greater Waco Chamber of Commerce and various charities.

Meanwhile, some community groups are pushing for farmers markets in downtown and other urban areas.

The Heart of Texas Urban Gardening Coalition has expanded its community gardening efforts at inner-city schools and churches.

And the Family Health Center is planning a small food store as part of its expanded campus on Colcord Avenue, now under construction. The store would supply patients fresh, healthy food and cooking classes.

Brook Oaks isn’t the only neighborhood in Waco lacking a grocery store nearby. Some new neighborhoods in China Spring are more than five miles from the nearest supermarket, the North 19th Street H-E-B.

But the term “food desert” usually applies to lower-income areas where people might not have adequate transportation.

A 2009 U.S. Department of Agriculture study on food deserts found that about 2.3 million households live more than one mile from a supermarket and have no vehicle, or about 2.2 percent of the U.S. population.

In McLennan County, the issue appears especially acute in parts of North Waco and East Waco, where supermarkets are distant and people are more likely to be poor and not own a vehicle.

Census Tract 12, which takes in much of Brook Oaks between Waco Drive and Herring Avenue, fits those criteria. Of 3,572 residents, 44 percent are under the federal poverty line, according to the Census Bureau’s American Community Survey.

And 29 percent of occupied homes in the neighborhood have no vehicles available.

Elsie Watson, a longtime resident of the Villages Section 8 apartments in that area, said getting to the store can be a struggle for those without cars.

“It’s difficult when you don’t have access to a nice grocery store,” she said. “I know people who go to the store maybe once a month . . . Of course, most of them buy canned and frozen food. They might get fresh food right around the first of the month, but they know it’s not going to last the whole month.”

Watson said some residents take public transportation, while others pay $5 to $10 for a ride to the store. Others walk to convenience stores.

“Those little neighborhood stores, if they have fresh things, it’s so high,” she said. “It would be nice if we did have a grocery store.”

Herbert said because traditional grocery corporations don’t seem to be interested in the area, there might be an opportunity for entrepreneurs to open food co-ops or small urban grocery stores.

He said there are 18,000 people in the 7.5-square-mile area the city has identified as “Greater Downtown,” but only one supermarket, a small H-E-B on South 12th Street and Speight Avenue.

“The No. 1 thing I hear from people interested in downtown development is that we need a grocery store,” McGowan said. “Those kinds of neighborhood services are essential to promote residential development.”

In the meantime, the chamber is supporting efforts to create farmers markets in downtown and elsewhere.

“I don’t think providing local, healthy items needs to be prohibitive for anyone,” he said.

The Family Health Center’s new 24,000-square-foot medical building that will include 8,000 square feet for its nonprofit food store and health center may also be part of the solution.

The Family Health Center is the leading provider of health care to McLennan County’s low-income population, and more patients come from North Waco than any other area, CFO Allen Patterson said.

He said the center aims to change patients’ lifestyles to manage or prevent diseases such as diabetes and heart disease.

The food store will offer vegetables, fruits, meats and other staples, with a discount for low-income patients. It will include a kitchen for hands-on cooking classes that teach patients how to make food healthy, quick and tasty.

Meanwhile, the Heart of Texas Urban Gardening Coalition also is working in low-income areas to make fresh food not only more accessible, but more popular. The group works to promote gardens at homes, schools and churches and is part of the farmers market initiative.

In her past experience as a social worker, she found that low-income clients at food banks would often pass up locally grown produce for refined, high-calorie foods that elevate diabetes risks.

“Clients would often not take it because they didn’t know what to do with it or didn’t have the capacity for preparing or cooking it in the house,” she said.

Erickson said her group is trying to teach residents to grow and prepare their own food, beginning with inner-city after-school programs.

“With the youth, we’ll ask what their favorite food is, then we’ll take the things they’ve grown and make our own version of a french fry,” she said. “Through the process of growing and cooking food for themselves, they learn that they can make their own food.”