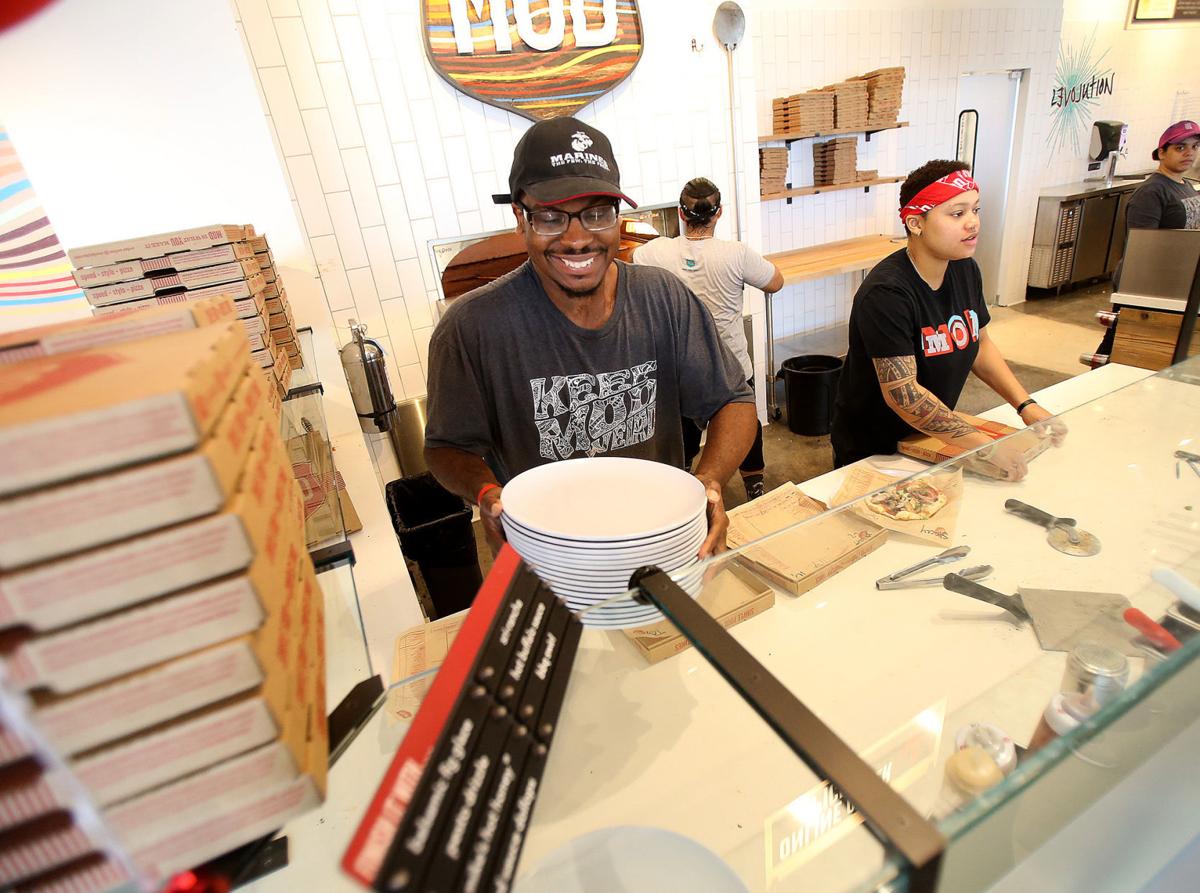 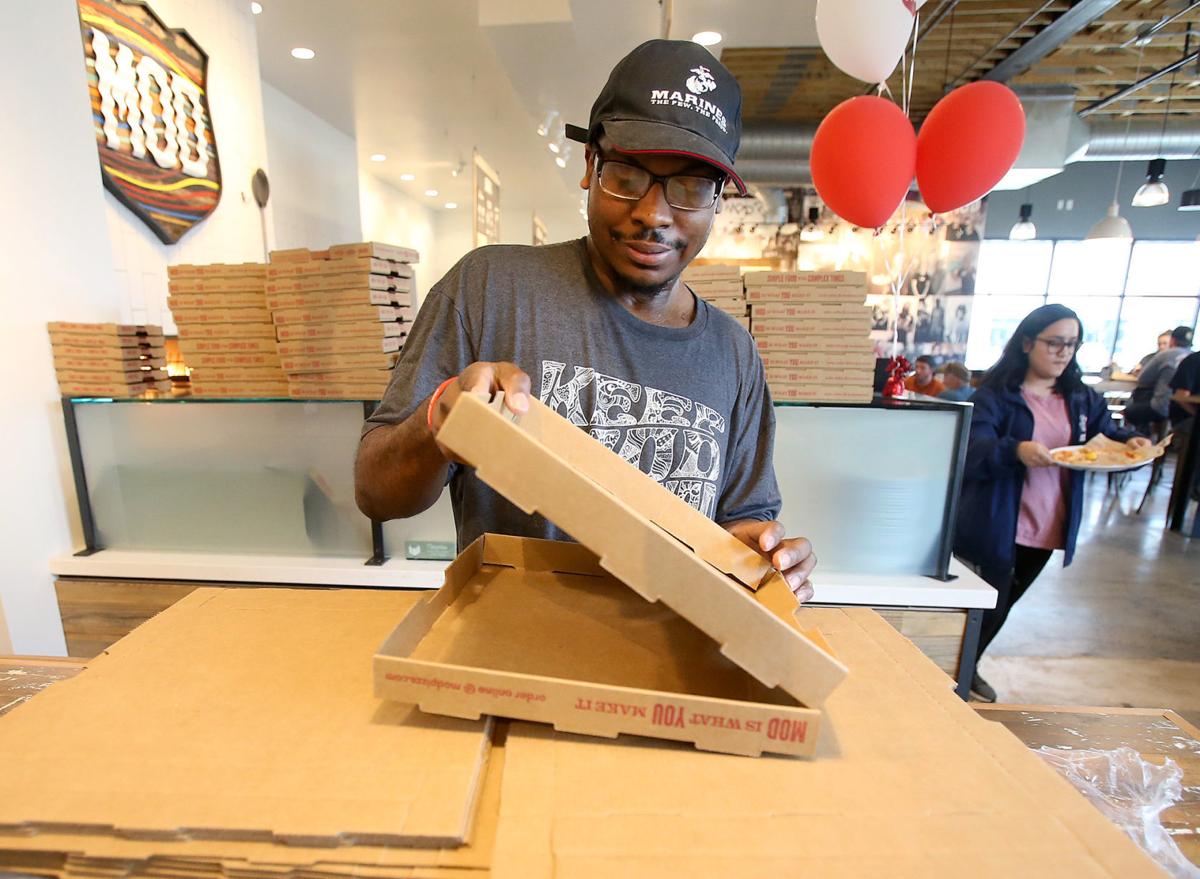 James Edward Counts III is a success story. He assembles pizza boxes at the new Mod Pizza location in Waco. Occasionally he will veer outside his lane and apply elbow grease to a table top or remove streaks from window glass.

He is a model employee, Mod general manager Jason Guehler said. He typically arrives 30 minutes before his shift starts and gets along well with others at the pizzeria that hugs the I-35 frontage road near 11th Street. It is Waco’s first Mod, where customers customize their pies, the music is thumpingly loud and the vibe and artwork, a psychedelic butterfly for example, hearken to the 1960s.

For Counts, the beat goes on. He is making the best of a life that tossed him a curve when he was 15. Riding his bicycle with cousins along Waco Drive bound for his grandmother’s house, his bike was struck by a car from the rear. Flipped backward, the young Counts’ head smacked against the windshield.

He suffered a traumatic brain injury, he said matter-of-factly.

Recovery and therapy became constant companions. He bagged groceries at the H-E-B on Wooded Acres Drive. Now he is part of the Mod family.

Though she calls herself “job coach” or “mama bear,” Donaldson’s Work Ready Texas business card says employment specialist, and she is paid to champion causes for clients including Counts. She is also employed in a psychiatric facility.

“I’m open with them,” Donaldson said. “I don’t sugar-coat anything. But I also watch over them. No one is going to hurt them.”

She will visit Counts on the job once or twice a week, unannounced, to monitor his progress, and she expects good reports.

Donaldson said she became sold on Mod Pizza long before the Seattle-based chain chose Waco for expansion. Her territory includes the Temple-Belton-Killeen corridor, and she knew of Mod’s laid-back and upbeat corporate persona. She praised the “morals of the company,” and its dedication to offering more than lip service to being inclusive and dedicated to second chances.

“We hire you, and we don’t forget about you,” Donaldson said, giving a mantra she believes reflects Mod’s core values.

Jimmy Dorrell said he agrees, and he knows something about second and third chances as founder of Mission Waco/Mission World, a ministry and nonprofit that targets the homeless, hungry and marginalized.

“They are truly unique in their business model,” Dorrell said in an email response to questions about Mod.

The chain pledged its first-day profits to Church Under the Bridge, which Dorrell founded.

Dorrell said he remembers speaking during a service in The Woodlands in 2017 that the Mod director of Texas operations attended.

“He was deeply moved by the message I preached about the poor and marginalized,” Dorrell said. “He decided then that if/when Mod came to Waco, that we would be their charity for the first day.”

Like Donaldson, he said Mod creates a fun work environment, “giving significant dignity to the workers and even empowering them with choices to bless certain customers with a free pizza or drink, especially if the customer has had a bad day,” Dorrell wrote in his email. “They encouraged individuality, the only guide was a Mod T-shirt, in the midst of teamwork.”

Husband and wife Scott and Ally Svenson founded Mod in 2008 after ventures that include launching Seattle Coffee Co. and later selling it to Starbucks.

“We believe that our society is at a tipping point,” Mod CEO Scott Svenson told Forbes magazine in February last year. “Companies can no longer focus solely on enriching their shareholders. They need to consider the impact they make on their employees, their communities and society at large.

“People increasingly expect this, and our society needs it.”

Mod spokeswoman Charlotte Wayte said corporate culture aside, the company offers a good product. Customers can build their own pies or salads and complete their dining experience with house-made lemonade and iced teas, craft beer and wine, handspun milkshakes and “No Name Cake.”

Wayte said Mod targets three groups in its approach to impact hiring: People with felony convictions and those formerly incarcerated; low-income 18- to 24-year-olds not in school and not working; and people with “significant intellectual, physical and/or development disabilities.”

She said Mod, which has more than 400 locations nationwide, donated $5,761 to Church Under the Bridge and proceeds from the first two in-store training days to its employee assistance fund.

Kyle Citrano, operating partner at George’s Restaurant & Bar on Hewitt Drive and Waco Restaurant Association president, said he can relate to Mod Pizza. He hired a young autistic man a couple of years ago who became a crowd favorite with George’s customers and his fellow staffers, Citrano said.

Another veteran employee joined George’s after brushes with the law.

“He was somebody looking for a second chance, having served a little time and wanting to be a better father and gain custody of his children,” Citrano said. “He was remorseful, made a change for the better, so we gave him an opportunity. He tells me all the time how much he appreciates it. Now he does everything. He’s a waiter, bartender, makes deliveries, everything.

“It feels good to give someone a second chance, to not have their life ruined. We’ve found most are willing to bust their butt for you if you’ve busted your butt for them. But it takes two to tango. It’s not always going to work out, but at least you’ve tried to help, to become a mentor.”

As for Counts, his father provides a place to live and a lift to work at Mod. He follows football, his favorite team being the Baltimore Ravens. He reads his Bible pretty often, loves to paint, enjoys pizza, of course, and has developed a fondness for Bush’s Chicken. His body aches occasionally, he said, though he does not blame the steel needed to patch him up.

He once considered walking to work, or to the bus station, but “flashbacks” of that day nine years ago intruded on his thoughts. He smiles often, makes good conversation and said people need to learn to relax.

“What if it didn’t happen?” Counts said, repeating a question.

His T-shirt delivers another message: “Enjoy the Journey.”