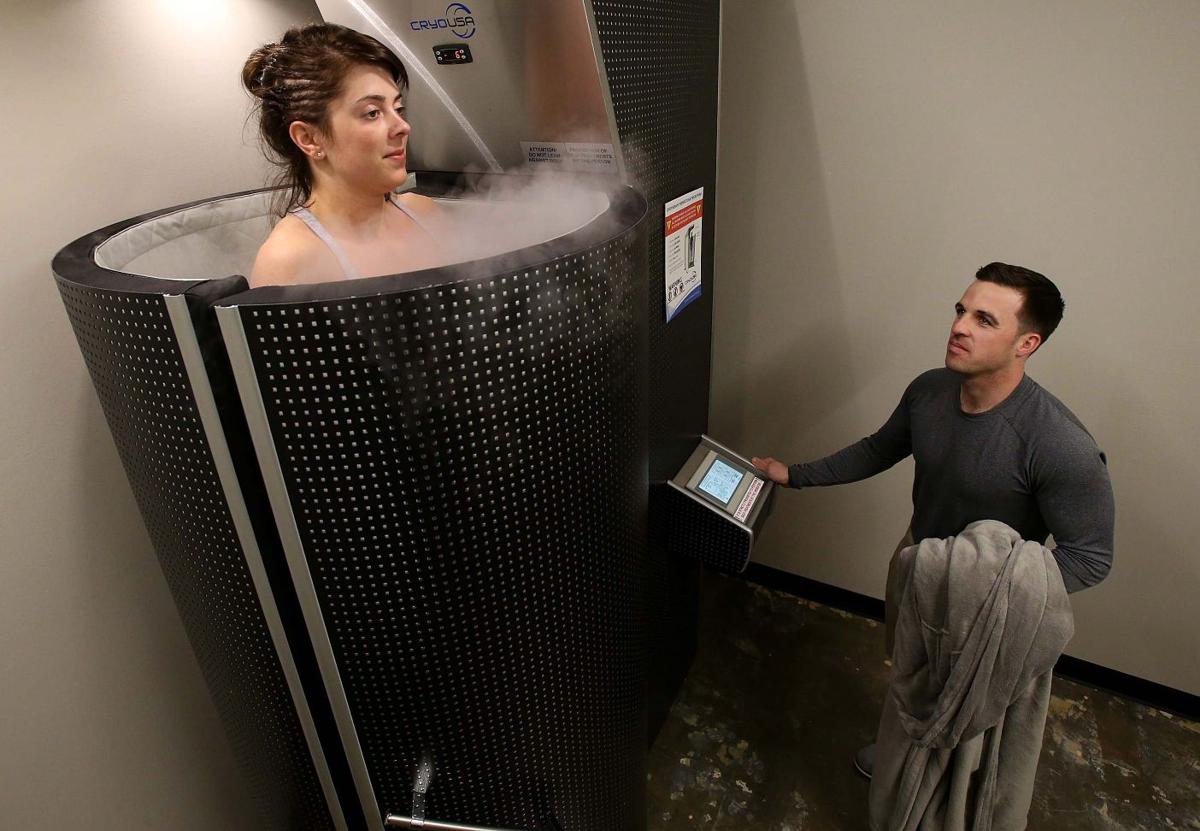 Madison Jurrius (left) and Chris Goss, co-owners of Elysian Cryotherapy, demonstrate the use of a machine that creates good feelings by causing temperatures to plummet. 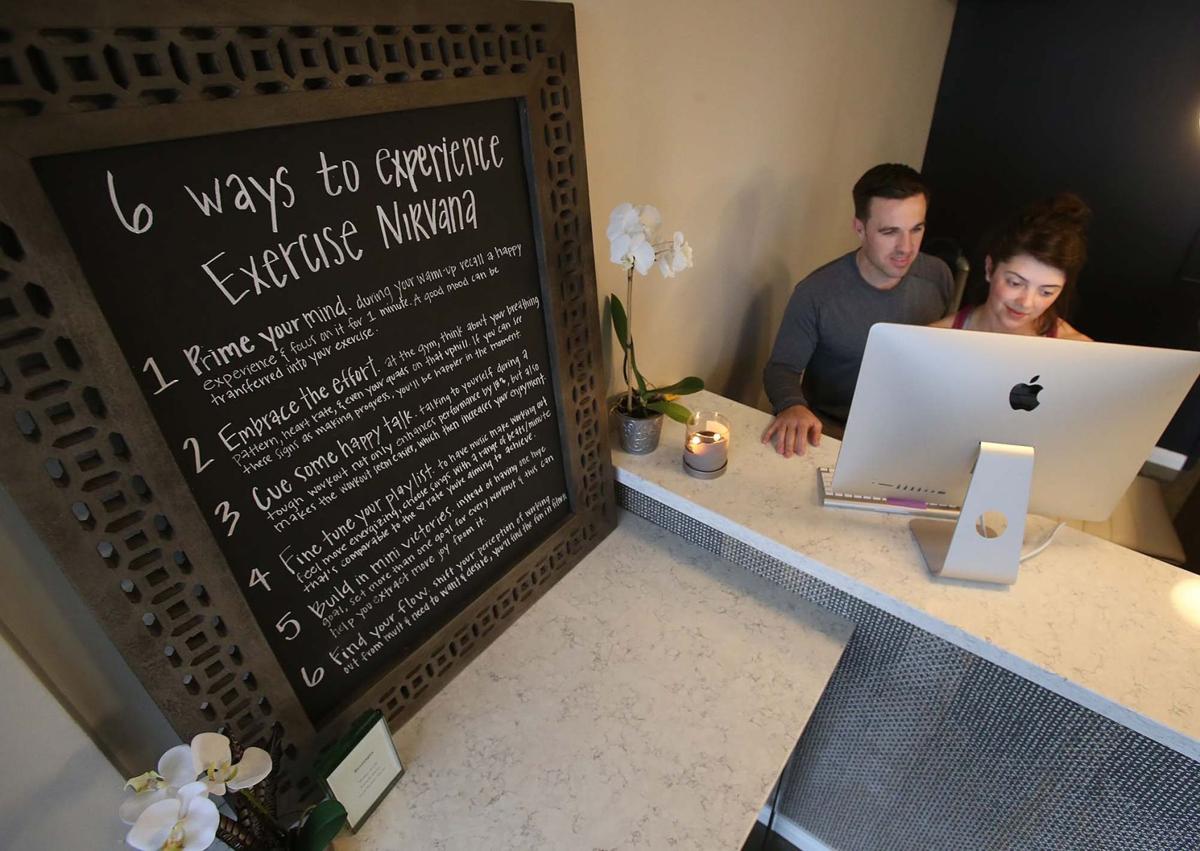 Madison Jurrius and Chris Goss, co-owners of Elysian Cryotherapy, work on a computer as a message board explains how to embrace the cryotherapy experience. 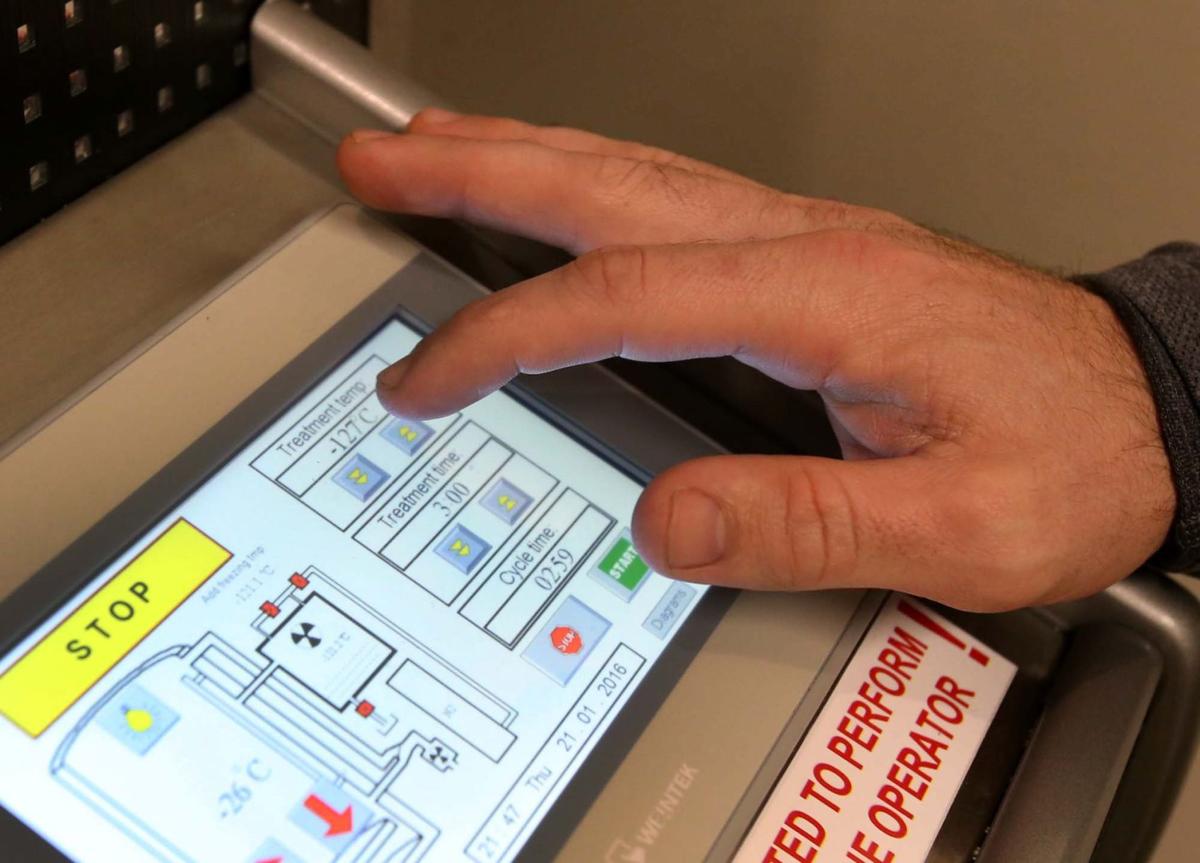 Chris Goss, co-owner of Elysian Cryotherapy, demonstrates the use of the machine.

Madison Jurrius (left) and Chris Goss, co-owners of Elysian Cryotherapy, demonstrate the use of a machine that creates good feelings by causing temperatures to plummet.

Madison Jurrius and Chris Goss, co-owners of Elysian Cryotherapy, work on a computer as a message board explains how to embrace the cryotherapy experience.

Chris Goss, co-owner of Elysian Cryotherapy, demonstrates the use of the machine.

Spending just a couple of minutes in a machine that could turn someone into a human icicle may not sound appealing. But people who dip a toe into the world of cryotherapy swear it makes them feel rejuvenated, eases pain and inflammation and even provides a shot of energy.

With that in mind, Chris Goss has launched a new company in Waco called Elysian Cryotherapy that is growing in popularity with the 50-plus crowd and with athletes who stop by his office at 1101 Richland Drive, in the Uptown Plaza, for a quick blast of extreme cold.

Goss, 30, a personal trainer at WRS Athletic Club, 5047 Franklin Ave., became so impressed with what he learned about the process that he invested about $50,000 in a cryotherapy chamber, established a website and opened in December with help from his fiancee, Madison Jurrius, who chose the name “Elysian,” which means divinely inspired and peaceful.

Elysian also has served to bring comfort to Goss’ father, Grant Goss, 58, who suffered a serious neck injury while playing football for Richfield High School in the 1970s. In a game against Tyler Lee, while playing linebacker, Goss slammed into a running back with such force that he damaged two cervical nerves.

Surgeries and shots alleviated some of the pain, but now he swears by cryotherapy.

“I visit my son’s place at least three times a week,” Goss said. “I can’t say it completely melts the pain away, but it does give me a little relief.”

More than anything, he said, the cryotherapy sessions give him more energy.

“He told us the other day that he’s sleeping better than he has in 15 years,” Jurrius said.

Towels are plentiful for customers about to slip into the chamber because they must be completely dry.

“We bought our machine through CryoUSA, and we have gone through extensive training on its use,” Goss said of himself and his five certified operators. “The machine automatically cuts off after three minutes, and you begin receiving the benefits past a minute and a half.”

Elysian charges $35 for the first visit, after which it offers an array of price packages and memberships. Goss said about 15 members visit his business regularly, but since he opened in December, he has been seeing eight to 10 customers daily, with a high day of 23 visitors.

“We’ve used a stopwatch to time visits, and it really is an eight-to-12-minute process of filling out a small amount of paperwork when you arrive, after which we give you socks and gloves and point you in the direction of the machine,” Goss said. “You complete your therapy, get dressed and are ready to go.”

Gretchen Chiles, 53, a personal trainer at WRS Athletic Club who directs a fitness boot camp, said she feels rejuvenated after spending time in the chamber. She said it reduces soreness and inflammation and improves the appearance of her dry skin.

“Some athletes take ice baths, which are not the most comfortable thing in the world. They are beginning to use this instead,” Chiles said.

Goss said he encourages his clients at WRS Athletic Club to use cryotherapy to hasten their recovery from vigorous workouts.

“This is something I wanted to make beneficial to the people of Waco,” Goss said.

He studied health and kinesiology at the University of Texas at Tyler, where he played baseball. He was certified as a personal trainer at the Cooper Clinic in Dallas before beginning his career in 2009.

Gianni Antongiorgi, who has opened Cryotherapy Killeen, said athletes once dominated the use of cold chambers, “But now franchises and independent centers are opening up across the U.S., making it more affordable for the average person.”

Most cryotherapy chambers are kept frigid through the use of liquid nitrogen and refrigerated cold air.

Antongiorgi said people who enter a cryotherapy chamber find that their body senses the extreme cold and begins to recall blood from the extremities to the core to protect vital organs. This process puts nutrients, enzymes and endorphins in motion, and an endorphin rush creates a sensation of well-being.

“Yes, it’s awfully cold, but it lasts only three minutes at the most,” Antongiorgi said. “It’s bearable and safe when proper supervision is present.”

Asked about possible drawbacks, Antongiorgi said, “None. It’s pretty much natural. It stimulates the body’s natural recovery process and does so very efficiently.”

He said cases of frostbite are uncommon but can occur if a client enters the chamber without thoroughly drying.

Still, physicians nationally have warned that anyone planning to have a cryotherapy treatment should take precautions. People with high blood pressure, poor circulation in their fingers, asthma or blood clots anywhere in their body may want to reconsider, as should women who are pregnant.