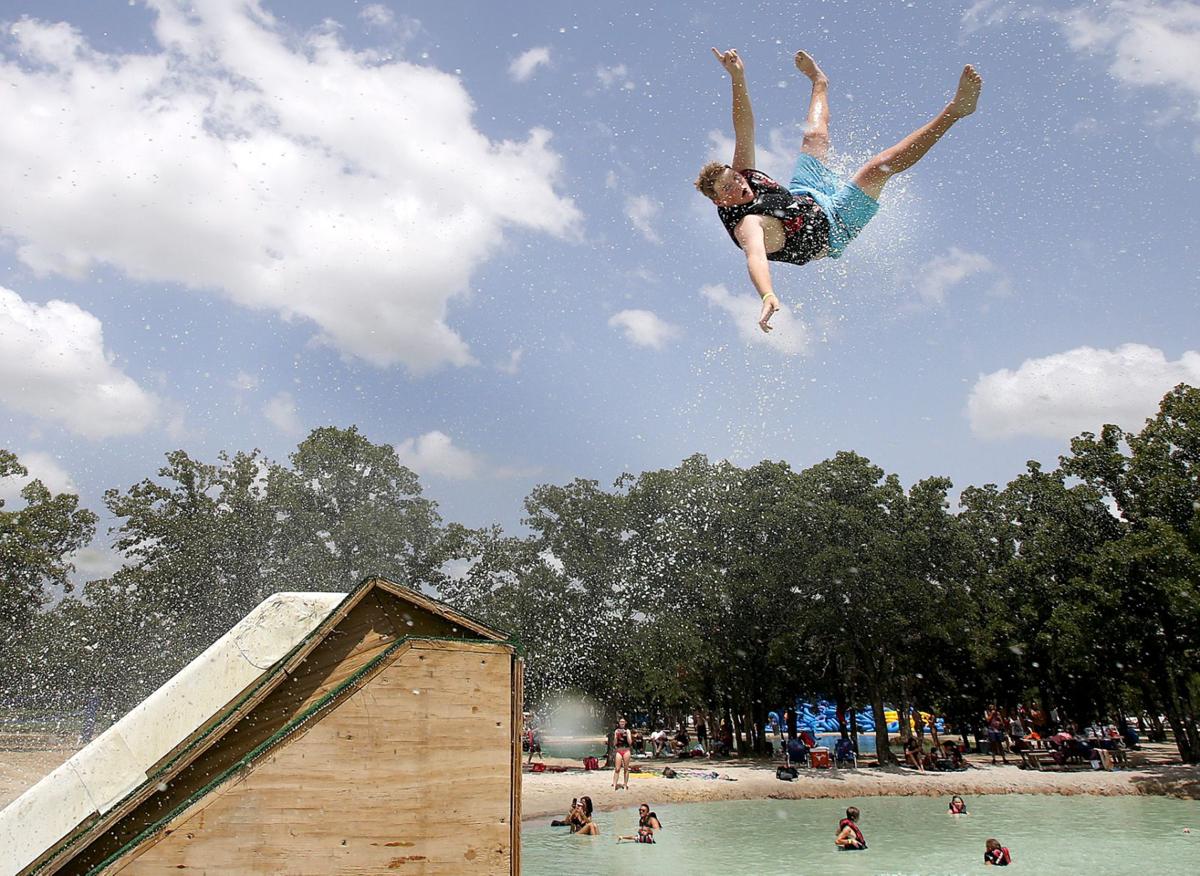 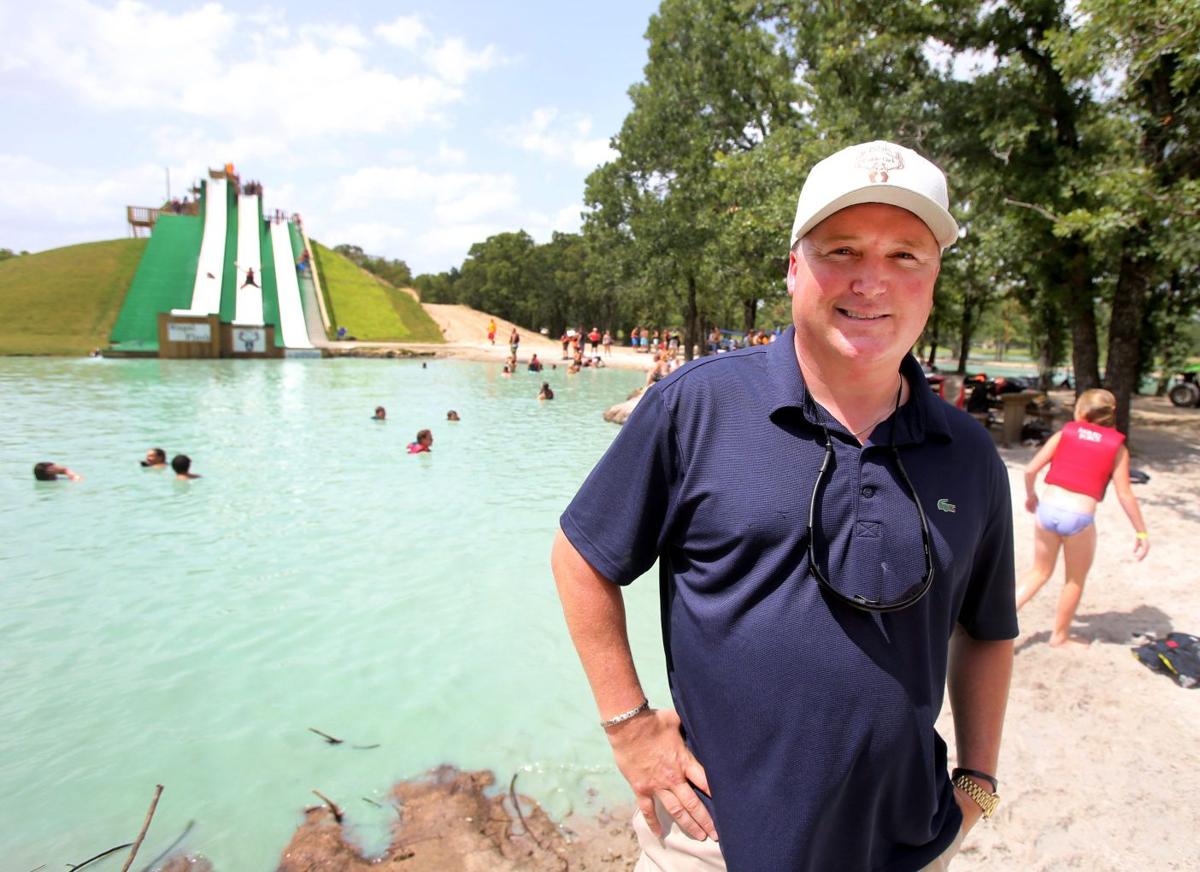 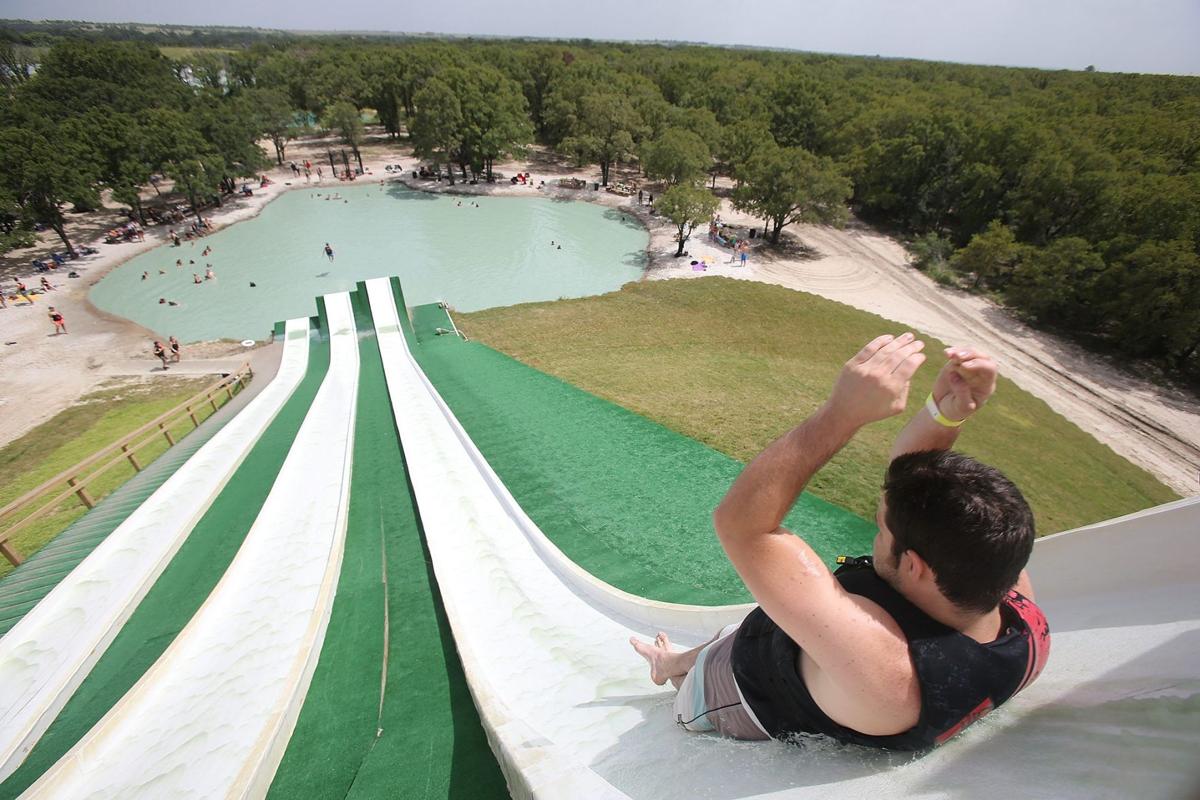 A park visitor slides down the Royal Flush, a 120-foot-long waterslide at BSR Cable Park, near Axtell. 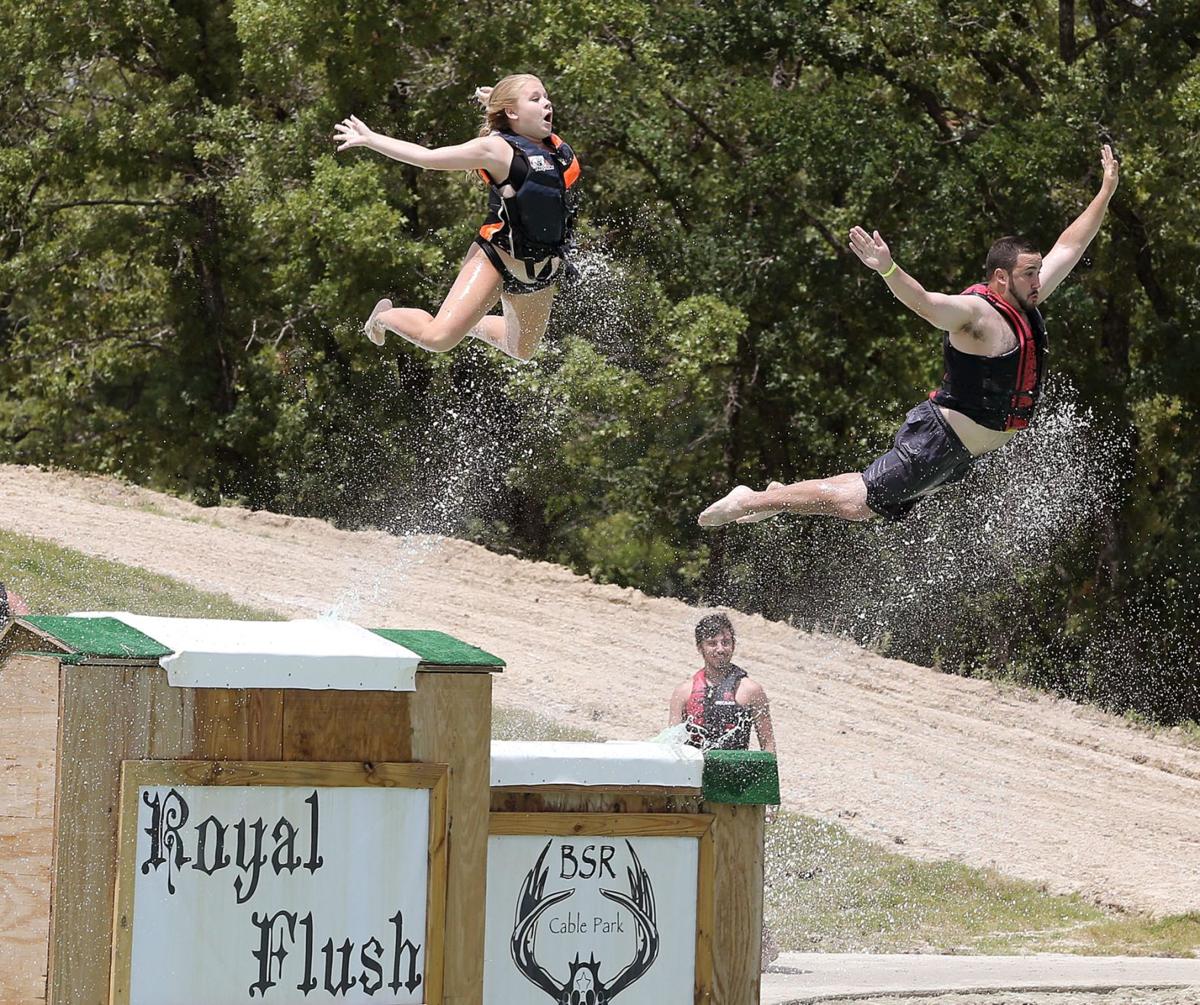 Visitors fly off a waterslide at BSR Cable Park, near Axtell. Owner Stuart Parsons said the park has received an influx of visitors after a new marketing video for the feature went viral last month. 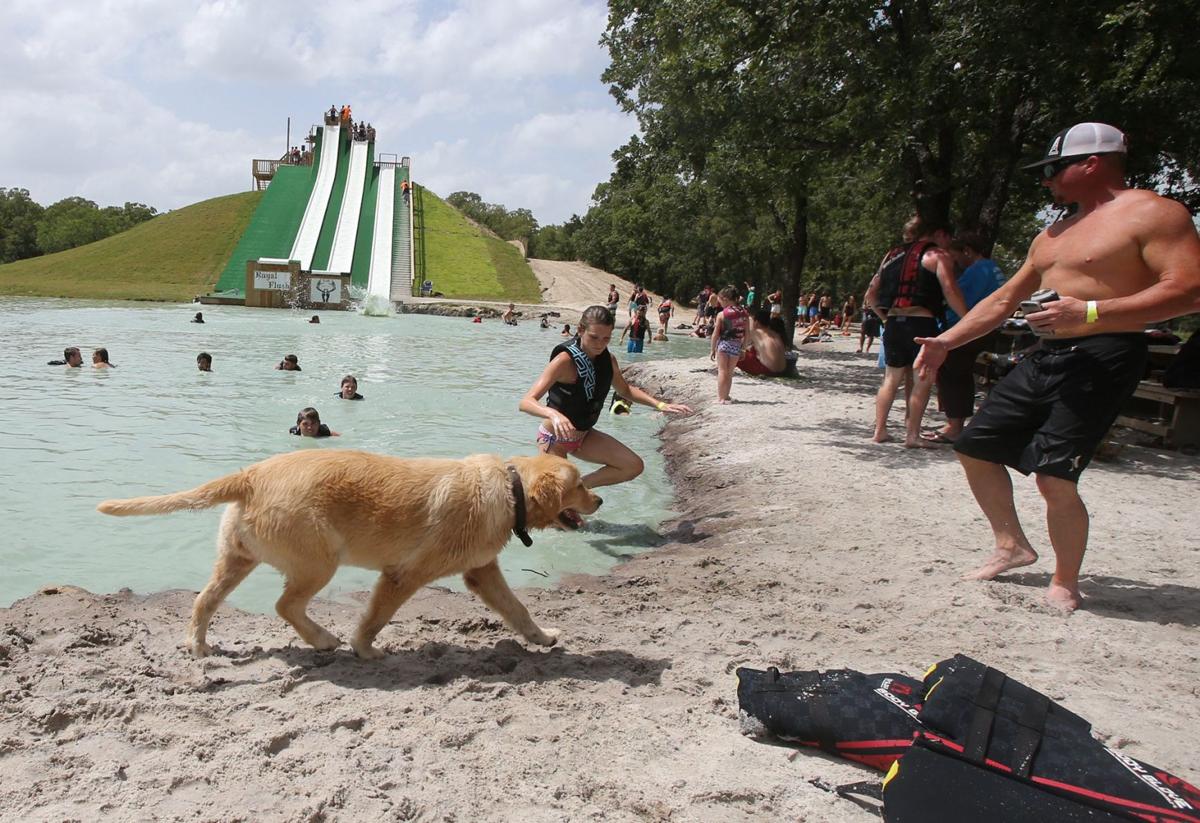 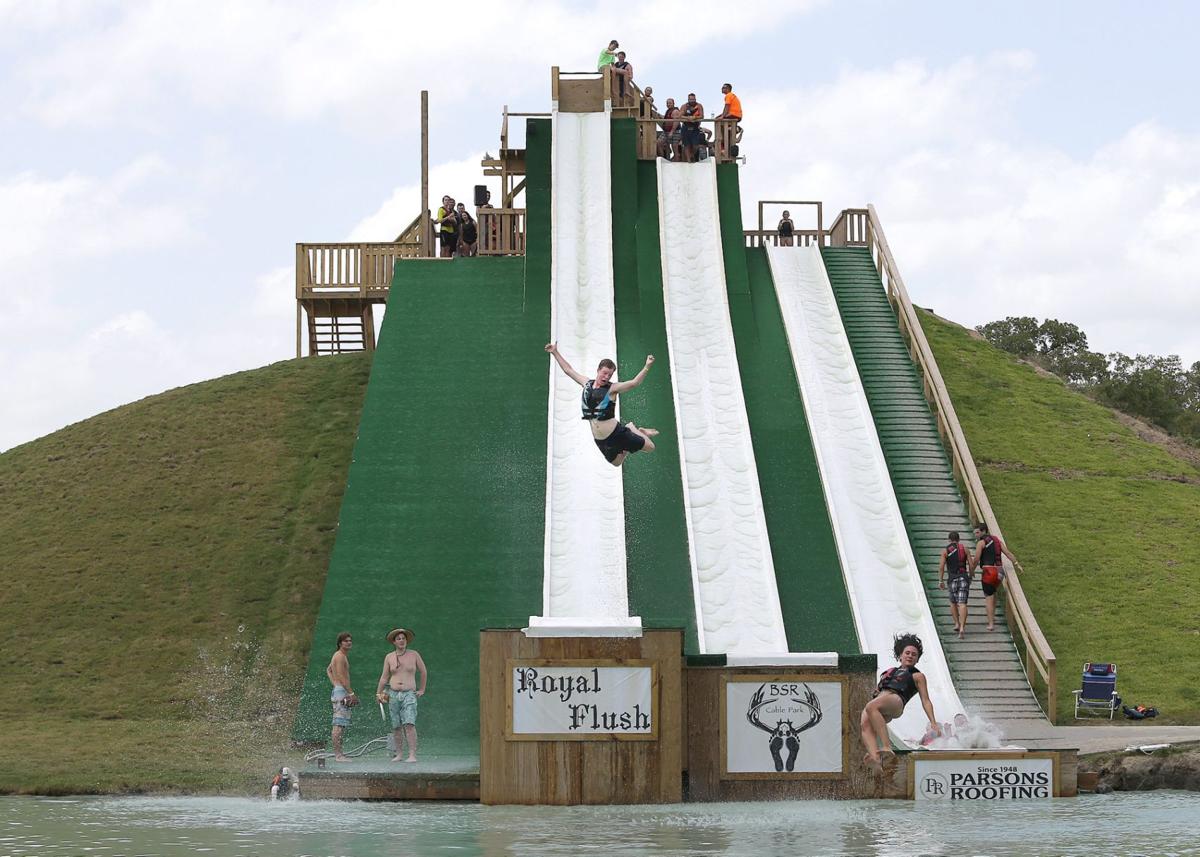 Andrew Shelton, 16, center, of Odessa, flies off of a waterslide at BSR Cable Park, near Axtell. Owner Stuart Parsons said the park has received an influx of visitors after a new marketing video for the feature went viral last month.

A park visitor slides down the Royal Flush, a 120-foot-long waterslide at BSR Cable Park, near Axtell.

Visitors fly off a waterslide at BSR Cable Park, near Axtell. Owner Stuart Parsons said the park has received an influx of visitors after a new marketing video for the feature went viral last month.

Andrew Shelton, 16, center, of Odessa, flies off of a waterslide at BSR Cable Park, near Axtell. Owner Stuart Parsons said the park has received an influx of visitors after a new marketing video for the feature went viral last month.

Around this time last year, owner Stuart Parsons said his park saw about 1,000 visitors per week pay to ride the park’s lazy river or wakeboard using BSR’s cable pulley system. Last week alone, BSR had about 8,000 visitors and is set this week to see 10,000, he said.

Of the three side-by-side slides, the largest is called the “Royal Flush.” The attraction was finished in April and opened to the public in May. The top of the slide rises 50 feet above the ground. The slide itself is 120 feet in length.

A pool of water, colored blue despite its clay bottom, surrounds the slide.

The cable park, which opened in 2013, is known for its ring-shaped waterway for wakeboarding but it also has cabins, a restaurant and lazy river open from noon to 8 p.m. daily at 5347 Old Mexia Road, near Axtell.

“I like seeing people smiling, laughing and having a good time,” Parsons said. “And giving people around here something to do.”

“This is for the athletic teenager to the 30-year-old,” he said of the Royal Flush.

But Parsons, 43, said he’s been down the attraction “100 times” and has clocked himself going up to 35 miles per hour.

“It just beats me up,” he said. “But if you asked me to go up there and try three flips, I’d do it right now in my jeans.”

Park goers Thursday were visiting from places as varied as Iowa and Georgia, but most said they were from throughout Texas. Nearly all said they had seen the video of the slide on Instagram, Twitter or Facebook.

The video — which features slow-motion shots of the three slides at twilight, bikini-clad models holding puppies around the water, families grilling under trees and men performing backflips — accumulated 14,277,179 views as of 7 p.m. Friday after only three weeks online.

For the video, Parsons said he brought in models and professionals because “We just wanted to do it right.”

Parsons, who also is the third-generation owner of Parsons Roofing, said the viral video was filmed by AJ Aguirre and Ben Hamner of Round III Media, and he’s received attention from ESPN, The Travel Channel, The Weather Channel and several national news stations. German, national and local reporters alike have gone down the slide with cameras attached to them, he said.

Other than a few cuts and gashes from people whom he said did not follow instructions and use the slide properly, Parsons said there haven’t been any safety issues.

Parsons said there are signs up on top of the slides and staff members who remind riders to cross their arms across their chests on the way down.

Still, he said that incidents occasionally happen, so his staff will undergo first aid and CPR training next week.

“I want every person that’s employed here to be first aid and CPR certified,” he said

Teenagers and adults swam and lounged to Top 40 hits on a loudspeaker. Every few minutes, the smack of someone belly-flopping echoed around the lake.

Parsons said he wanted to give people who might not be into wakeboarding or the lazy river something to do at the facility, which is how the waterslide idea came about.

Gabrielle Adamson and Cheyenne Young, both 17 and from Allen, said they packed their sunscreen and towels to drive the more than two hours with friends after seeing the video on Twitter.

Neither went down the Royal Flush, but they tried the other two slides.

“Our butts are still red,” they said in unison, giggling.

Adamson and Young said they had chugged Monster Energy drinks to give themselves a burst of courage before speeding down the slide.

Young said her favorite part was “the anticipation, the thrill. When you come up and you know you’re about to land.”

Both were happy with the number of people around the water and were disappointed to leave when they had to pack up mid-afternoon.

Aimee Shelton, 47, a mom and substitute teacher, said she came in from Odessa with her teenage sons and nephews — ages 13 to 19 — stopping at Torchy’s Tacos before heading to the cable park. Shelton didn’t plan to go down the slides herself but was filming the boys and waving at them from the sideline.

“My one son read everything online” before the trip, she said. Still, she was nervous watching them slide down and then catapult into the air.

She told them they could all participate, though, “as long as y’all do it the right way.”

Nicole Lane, 43, from Atlanta, said she was expecting something “a little more upscale” after watching the viral video, but said, “If I was a teenager, I would love this.”

“I think it’s fun; I’m just too chicken to use the slides,” she said

Lane met Stephanie Hyndman, 34, and her friend, Elena Garcia, 33, both bikini-clad and from the Dallas area, at the park and were chatting in the shade.

“For a place with alcohol and that allows dogs, it really is a mellow atmosphere,” Lane said.

Hyndman added, “I just didn’t anticipate so much mud.”

Debi Emmert and Chloe Forbes, both 18 and about to be seniors in high school, saw the video on Twitter and drove from Spring to visit the attraction with a group of five friends.

“It was scary at first,” Emmert said. “We were super scared at the top but it was fun when we came down.”

Lounging in a chair at the edge of the water, Forbes nodded in agreement.

“We saw some videos and had nothing to do so we thought, ‘Let’s come here,’ ” she said.

Gabriel Rios, 21, and Marisa Aguilar, 19, were eating candy at a picnic table surrounded by colorful flotation devices and watching others try flips on the slide.

The couple drove down from Arlington to try the attraction after seeing it on Instagram, Rios said.

“I think I just like the speed of it,” he noted of the Royal Flush, added it was on par with waterslides he’d done at Six Flags Hurricane Harbor.

“It was pretty good,” Rios said.

Stay-cation 2015: No need to leave Waco for summer fun

Centrally located on the banks of the Brazos River, Greater Waco is a mecca for people from other parts of the state who want to visit our loc…