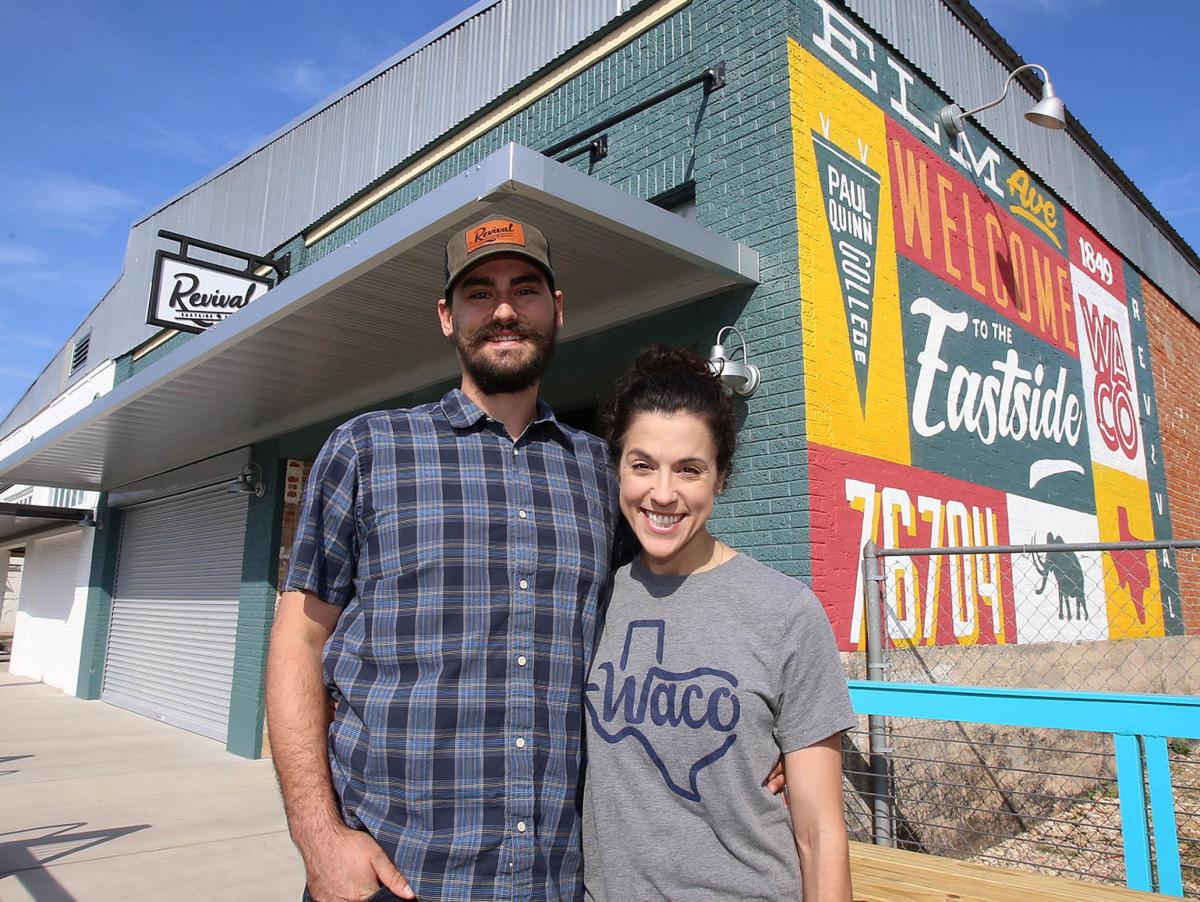 Danielle Ann Young and her husband, Travis, are owners of Revival Eastside Eatery at 704 Elm St. in East Waco. The site anchors a swath of Elm Avenue dubbed a “model block” by the Waco’s public works department. 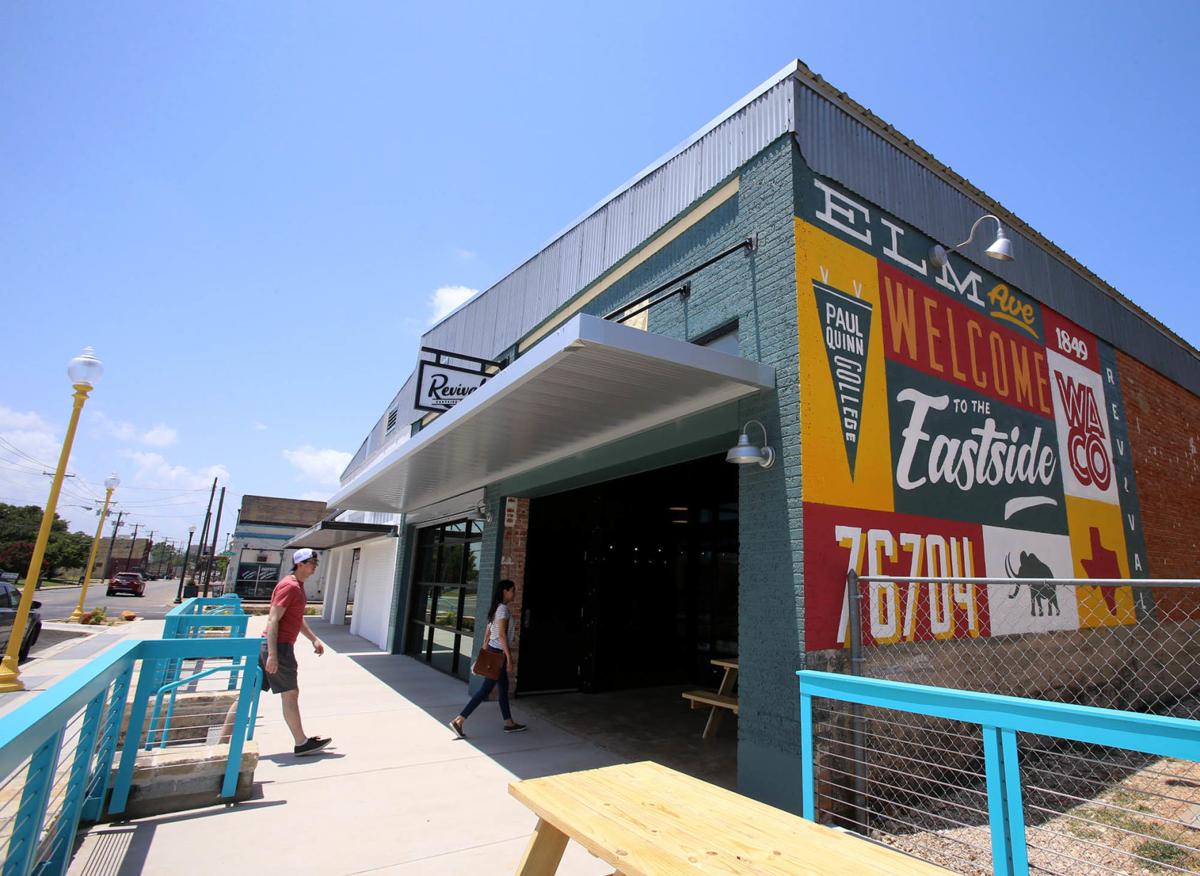 An exterior splash of greys, whites, blacks, light blues and yellows spread over brick and stone greets patrons as they enter the Revival Eastside Eatery on Elm Street in East Waco.. It operates across Elm Avenue from Fire Station No. 1. 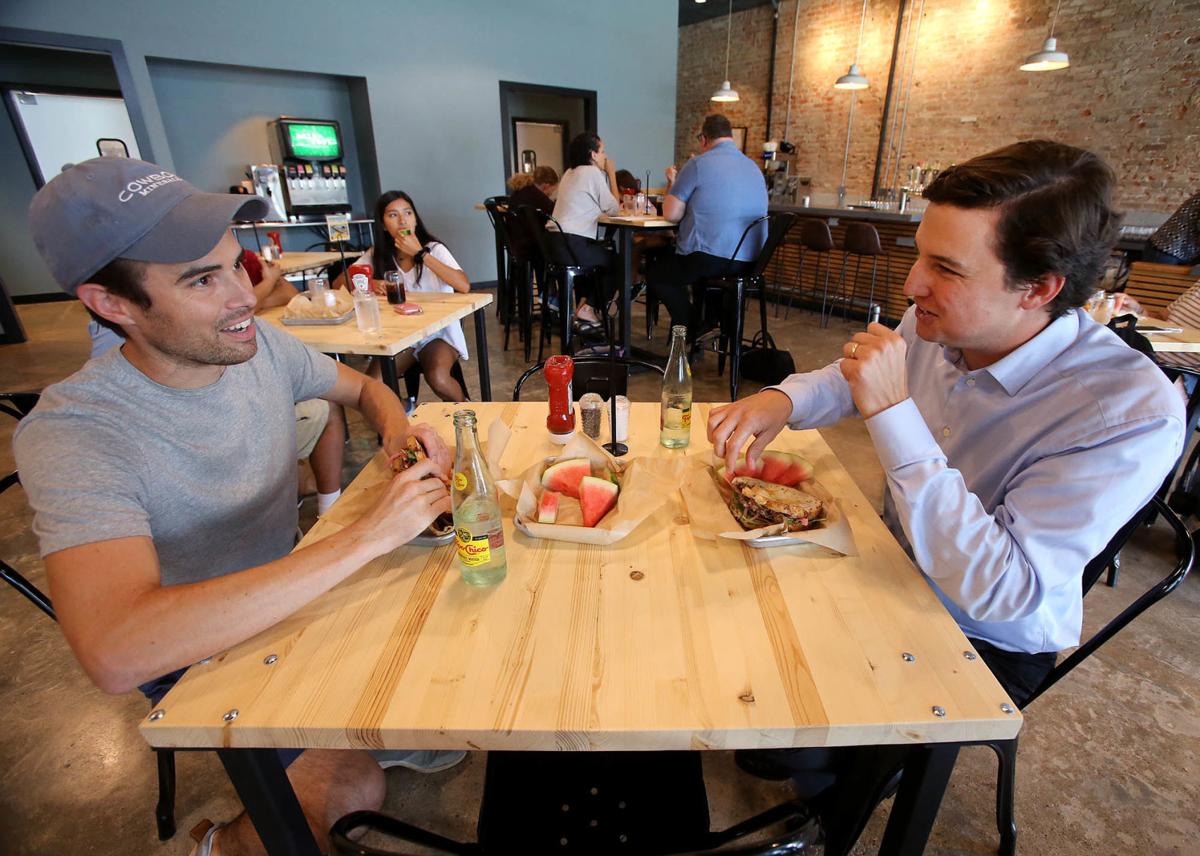 Matt Hardy (left) and Nick Deaver meet up for lunch at Revival Eastside Eatery on Elm Street in East Waco. The eatery is open for lunch weekdays, adding dinner hours on Friday and Saturday.

Danielle Ann Young and her husband, Travis, are owners of Revival Eastside Eatery at 704 Elm St. in East Waco. The site anchors a swath of Elm Avenue dubbed a “model block” by the Waco’s public works department.

An exterior splash of greys, whites, blacks, light blues and yellows spread over brick and stone greets patrons as they enter the Revival Eastside Eatery on Elm Street in East Waco.. It operates across Elm Avenue from Fire Station No. 1.

Matt Hardy (left) and Nick Deaver meet up for lunch at Revival Eastside Eatery on Elm Street in East Waco. The eatery is open for lunch weekdays, adding dinner hours on Friday and Saturday.

Revival Eastside Eatery has brought a new spirit to an old church building on Elm Avenue, serving burgers, salads, veggies and farm-to-table dishes in the 700 block of an historic thoroughfare enjoying a renaissance.

Owner and manager is Danielle Ann Young, who late Saturday morning was busily preparing for what would prove to be a hefty lunch crowd.

“I wear many hats,” said Young, a native of Asheville, North Carolina, who with husband Travis Young, a sales leader at Hole in the Roof Marketing, led a team renovating the former Waco Community Baptist Church at 704 Elm Ave. The site anchors a swath of Elm Avenue dubbed a “model block” by the Waco’s public works department. The area qualified for nearly $800,000 captured by the Tax Increment Financing zone and city budget allocations.

With that, crews added sidewalks, streetlamps, sewer and water lines, parking and a concrete alley to help three new renovation projects on the block, including that involving Revival Eastside Eatery. The Youngs requested $111,345 for facade restoration, a mural and other touches.

The result was recently unveiled — an exterior splash of greys, whites, blacks, light blues and yellows spread over brick and stone. It operates across Elm Avenue from Fire Station No. 1 and Train Waco, an extreme gym where members could be seen performing push-ups and sit-ups and working a rowing machine as heart-pounding music spilled from the site.

Train Waco has announced it is moving across town, to Valley Mills Drive. City Center Waco, also located on Elm Avenue, confirmed to the Tribune-Herald it has placed the newly renovated workout center under contract and now is considering options on how best to make it a neighborhood asset.

Meanwhile, Revival Eastside Eatery has commenced to serving five days a week, closing on Sunday and Monday. It offers lunch only from 11 a.m. to 2 p.m. Tuesday through Thursday, adding dinner from 5 to 8 p.m. Friday and Saturday.

Offerings include coffee, beer and wine, with a focus on locally sourced ingredients where possible, according to promotional material.

Grayson scoffed at the notion Revival Eastside Eatery represents competition, more like a complement, she said in a telephone interview.

“They’re a great young couple. I’ve tried to serve as a mentor,” said Grayson. “The more restaurants we get in this area, the better for everybody.”

Marilyn Banks, who in November will celebrate her 30th anniversary of operating a gift shop on Elm Avenue, said she may visit Revival Eastside Eatery on Monday, taking a break from her own business obligations.

“Anyone trying to open up and start a business, I’m glad for them. I wish them success,” said Banks, who has experienced the good times and bad on Elm Avenue, including the closing of Paul Quinn College, the state’s oldest historically black college, which relocated to Dallas in 1990.

Banks said she’s seeing a smattering of new customers due to completed and pending development within the Elm Avenue district.

“But it has not made a big difference in sales,” she added. “I have some faithful and loyal customers, so business is fine, it’s steady.”

Banks said she’s heartened by development along Elm Avenue, pleased that investors and entrepreneurs have become sold on the potential of Waco’s east side. She said she would not want to be perceived as negative.

Still, “some of the flavor has been lost,” she said by phone.

Wannika Muhammad said she has mixed emotions about development.

“I think growth is great. I’m a property owner myself. People can buy property anywhere and wherever they want,” said Muhammad, who owns 4 Sons Trucking, a licensed commercial trucking and freight hauling company based in East Waco. “But, talking frankly, I kind of get the feeling some of the existing businesses here are really being overlooked in the pursuit of new development. That’s about the only problem I have with what’s going on.”

Still, Muhammad owns a half-acre tract between Walnut and Calhoun streets in East Waco, and she took steps to have it zoned for commercial use. She also has approached an architect about her vision for the vacant land, though she said she is not ready to go public with any announcement.

“Baylor University has made me three offers on it,” she said.

Carla Dodson retired early from the Waco Regional Office of Veterans Affairs on Eighth Street downtown to catch the economic wave being created by Chip and Joanna Gaines’ nearby Magnolia Market at the Silos. Other projects announced along the Lake Brazos Corridor sealed her determination to make a move while Elm Avenue and its environs were making headlines.

She opened a food truck, Boardwalk on Elm, from which she sells burgers, shortribs, onion rings and other munchies. She parks it near the East Waco Library on Elm Avenue, and said she can’t complain about response. In fact, she said, she bought a barbecue trailer she will make available for community events and church functions. She’s considering pursuing a Public Improvement District grant to upgrade her Elm Avenue site, possibly have it landscaped, install patio furniture and a pavilion, hook up a couple of big-screen TVs.

She recently catered an event at Valley Mills Vineyards.

“My mother, she’s fired up about people coming in and buying people out. I was in the military, so I don’t view it as an invasion. I won’t call it gentrification, but there is a change in the neighborhood,” she said.

She said some have expressed annoyance at developers who acquire East Waco property then ask residents what should be done with it. Or community leaders take fact-finding missions to urban areas nationwide and return “all excited” about applying the development lessons they learn to Waco.

Getting locals involved first would be preferred, Dodson said.

She, like Banks and Muhammad, welcome Revival Eastside Eatery to the neighborhood, wish it luck and plan a visit soon, they said.