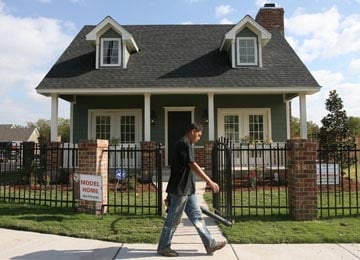 A maintenance worker uses a blower to clear debris from a sidewalk in the Magnolia Villas development on North 46th Street in Waco. 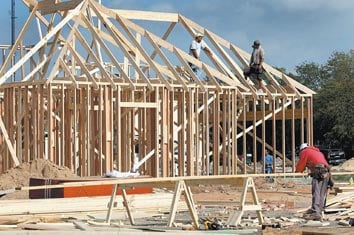 Another home goes up in the Magnolia Villas subdivision behind OakCrest Funeral Home. City officials say they are pleased that developers are building on vacant lots inside Waco.

A maintenance worker uses a blower to clear debris from a sidewalk in the Magnolia Villas development on North 46th Street in Waco.

Another home goes up in the Magnolia Villas subdivision behind OakCrest Funeral Home. City officials say they are pleased that developers are building on vacant lots inside Waco.

Chip Gaines admits he and his wife, Joanna, suffered a few insecurities about placing a housing subdivision in the heart of Waco and not in the exploding areas of Hewitt and China Spring.

But Bill Falco, Waco’s planning director, said the city wants developers to take on the sometimes difficult task of building on vacant land tucked away here and there, in a process he described as “infill.”

Another local builder, Steve Sorrells, is progressing with an inner-city subdivision called Cameron Heights. He thinks young professionals will like the home prices and its proximity to a downtown experiencing a comeback.

He said he admires the Gaineses and their Magnolia Villas, saying he’s seeing more builders choose a central location instead of urban sprawl and smaller subdivisions instead of hundreds of housetops.

“Sure, we were nervous,” Chip Gaines said about Magnolia Villas, “but when we got our head around it, we thought it was the right move. And we believe it will be successful.”

The Gaineses own 36 lots on 6 acres just behind OakCrest Funeral Home at North 46th Street and Bosque Boulevard. They have sold eight lots, and six homes are under construction or have been completed.

Work began on the subdivision this year, and the Gaineses hoped to sell 10 lots by December.

“If we sell two more by the end of the year, we will be right in line with projections,” Chip Gaines said, adding he hopes to have the subdivision completely built out by 2013.

Magnolia Villas is meant to appeal to “empty-nesters and pre-nesters,” Chip Gaines said, meaning mature couples whose children have moved away and young couples who don’t yet have youngsters.

Peggy Williams, 78, moved into her new home in Magnolia Villas earlier this week. She and her husband lived many years on a 41-acre ranch between Waco and Valley Mills, but now he is in a nursing home and she needs less space. She and a son, Waco attorney Dale Williams, found the answer on Bosque Boulevard.

“I like the fact it’s a gated community, and I love that they are maintaining my yard. I don’t have to worry about that,” Williams said. “The kitchen is smaller than I’m used to, but I don’t cook that much anymore. The finishing touches . . . are so attractive.”

Williams still drives, and her home came with a two-car garage and a patio.

“We’ve always encouraged infill development, but haven’t had much success until the last five to 10 years,” Falco said. “I believe young people and empty-nesters are placing more emphasis on convenience and being close-in.”

Residents of Magnolia Villas, Falco said, have a short drive to the H-E-B grocery store at Bosque Boulevard and Wooded Acres Drive, the Target Greatland shopping center on Bosque and several restaurants.

“To a certain extent, it is still a new trend. It is a pioneering effort,” Falco said. “The development must be right, in terms of quality, amenities and location. Most people who tackle them have done market testing.”

Falco said he’s impressed with the approach the Gaineses took with Magnolia Villas. It is a gated community, but the houses face other homes in the area and entrances line up with the existing street system.

“It is an urban enclave of single-family homes,” Falco said, “but it is very much a part of the neighborhoood.”

Jim Moshinskie, manager and president of OakCrest Funeral Home, said the Gaineses have been good neighbors.

“They have communicated with us every step of the way, and everything they have told us they were going to do, they have done,” Moshinskie said. “The houses are cute, and I understand they are selling well.”

Gaines said he spent “close to seven figures” preparing the Magnolia Villas site for development. He had to cut streets, build curbs and gutters and install infrastructure to make water and sewer service available.

The development includes a gazebo, sidewalks and green space.

Chip began his career developing rental property near Baylor University, while Joanna managed her father’s Firestone dealership in Waco. They later formed Magnolia Homes, and Chip used his construction expertise and Joanna her eye for design to create a following for their custom homes and remodeling.

“And then we decided to take this plunge at 46th and Bosque,” Chip Gaines said.

“It’s a good development in an interesting location,” said Sorrells, whose company has launched a multimillion-dollar infill project of its own called Cameron Heights at North Fourth Street and Bosque Boulevard.

“I think BRIC will become one of the biggest game-changers when it comes to living near downtown and the Brazos River. I can see someone coming home after work and taking a run along the water,” Sorrells said.

BRIC, short for the Baylor Research and Innovation Collaborative, is a plan by Baylor University, Texas State Technical College and local economic development groups to convert the former General Tire & Rubber Co. plant into a research center for students and industry.

Industries wanting to tap into the discoveries at the center will have access to land adjacent to the complex, where they may build and create well-paying jobs.