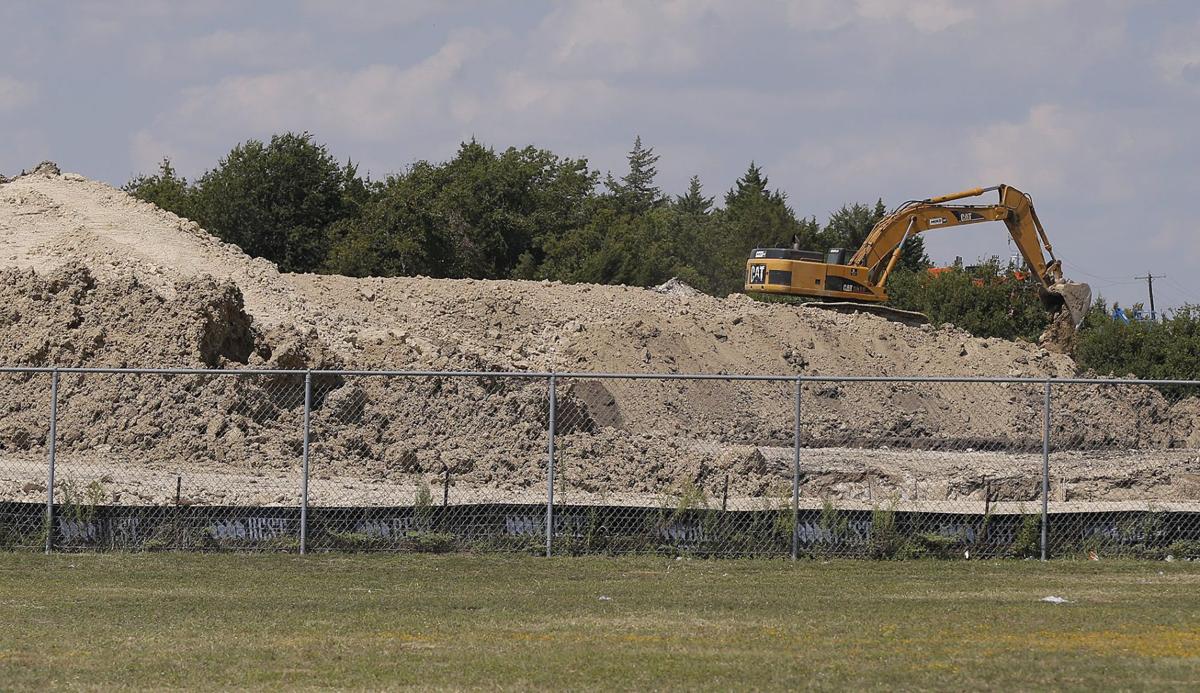 A $23 million apartment complex called Vantage at Waco will locate where land is being cleared next to University High School. 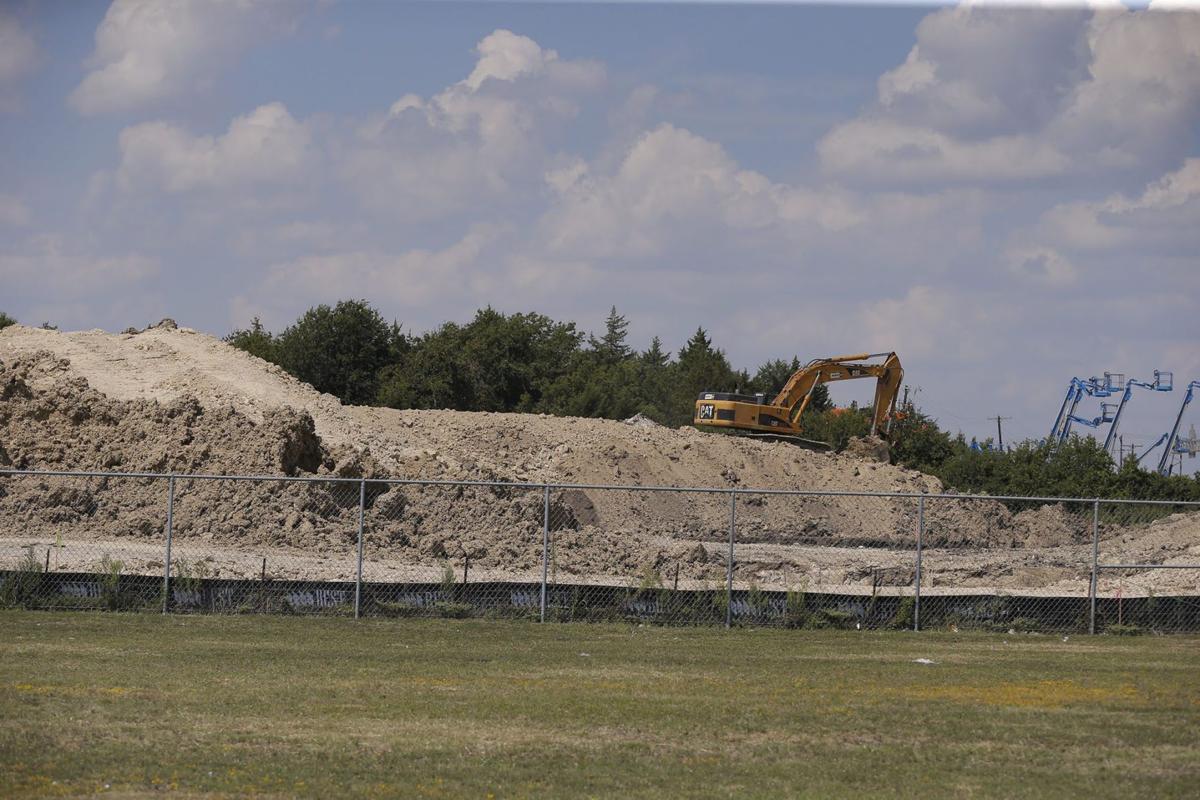 Heavy equipment is rumbling next to University High School on New Road, where a $23 million apartment complex called Vantage at Waco will house 288 apartment units.

Earthmovers are clearing land next to University High School on New Road for a $23 million apartment complex called Vantage at Waco.

A $23 million apartment complex called Vantage at Waco will locate where land is being cleared next to University High School.

Heavy equipment is rumbling next to University High School on New Road, where a $23 million apartment complex called Vantage at Waco will house 288 apartment units.

A San Antonio-based development group that has been spreading the “Vantage” name to communities around Texas is clearing land next to University High School on New Road to build a $23 million Vantage at Waco upscale apartment complex.

“We started our ‘Vantage’ development platform in 2007, and probably have built 24 to 25 properties under that name in that time,” co-founder John Condit said. “We like Waco and had been looking for a site there several years before we came across this piece of property.”

“This is our fifth development now under construction, with others in Corpus Christi, Boerne, New Braunfels and San Antonio’s Brooks City Base,” said Condit, adding he and partner David Starr recruit investors who help make projects possible from the purchase of land to the final touches of landscaping.

He said Concept Builders, of San Antonio, serves as general contractor for about half the Vantage-branded apartment villages, including Waco’s.

Units in Waco will range in size from 575 to 1,200 square feet, and will feature one, two or three bedrooms, faux wood floors, ceiling fans and appliances black in color.

“Waco will get a full amenities package, including a couple of dog parks, a resort-size swimming pool, a workout area and lots of green space for barbecue pits and picnic tables,” Condit said. “We’re also putting in Waco a concierge service for handling package deliveries, and a special dog wash that works with the touch of a button.”

Condit said the company has not yet established rental rates for Vantage at Waco, but will have them in place before it begins marketing the site in May.

Vantage has submitted its plans to the city of Waco, received permits “and now is rocking and rolling,” said Bobby Horner, city inspections supervisor.

An uptick in interest

He said the city has noticed an uptick in interest in building or repairing multifamily complexes, especially in the past couple of months.

“I guess they are doing their research and have determined this remains a good market, and I don’t see any letup,” Horner said.

The U.S. Department of Housing and Urban Development released an analysis April 1 of the Waco housing market showing demand for 1,375 rental units and 800 units under construction. It also noted that during the 12 months ending March 2016, the overall rental vacancy rate was 7.6 percent, down from 9.2 percent in 2010.

It said the drop “is because of an increase in the number of students at Baylor University who reside off campus.”

On the west side of Interstate 35, also on New Road, construction is winding down on the $25 million Tuscany Ranch Apartments, which is 284 units spread over 22 buildings and 11 acres, with the units leasing for $899 to $1,399 a month, depending on size and amenities. Community perks include a resort-style pool fed by fountains, a 24-hour fitness center, a dog park, courtyards, a clubhouse and internet cafe with gourmet coffee and tea, according to the company website and spokesman Scott Case.

This is the 20th apartment undertaking in Texas for Tulsa-based Case & Associates, which Case said prefers to build in college communities.

The Tuscany Ranch rental office said 82 apartments have been leased, and 52 are now occupied, even as finish-out continues on part of the complex.

“I bet they will be filled by the time we complete construction on Vantage at Waco,” said Condit, adding he does not think Waco is getting too many apartments.

“You’re really behind, I believe, because I think national developers have overlooked Waco. We didn’t. We were looking for years before we found the right piece of dirt.”

He said Vantage looks at employment figures, ease of transportation and the quality of schools when choosing a market to enter. It is not targeting a particular demographic group with Vantage at Waco, he said, and instead expects “the entire spectrum of residents, including students, young professionals and retired folks.”

Also in South Waco, Wisconsin-based Continental Properties is building 280 apartment homes in the 4900 block of Bagby Avenue, across the street from Cottonwoood Creek Golf Course. Pre-leasing reportedly has begun at Springs at Cottonwood Creek, and occupancy may begin as early as January 2017. Lease rates range from $900 to $1,500 a month, and amenities include a community clubhouse, resort-style swimming pool, free Wi-Fi, coffee bar and car-care facility.

Cromwell, who brokered the sale of the acreage to Continental Properties, said developers going up with new multifamily units know what they are doing.

“They are very seasoned, very good at their own analysis of supply and demand, and they are convinced we need more units,” Cromwell said.

Jim Lapides, spokesman for the Multi-Family Housing Council, which represents large apartment owners, managers and developers nationwide, said the trend being perpetuated in Waco is one impacting communities of every size around the country, “where we’re seeing more apartments under construction than we’ve seen in decades.”

He said percentages of the 80 million millenials and 77 million baby boomers are either entering the housing market for the first time or downsizing.

“We estimate the country needs 300,000 to 400,000 new apartment units each year to meet demand, and in 2015, 310,000 apartments were built,” Lapides said. “That’s the first year in many that we’ve met the bottom end of that spectrum, and since nothing was built during the last recession, there is a lot of pent-up demand.”

Luxury apartments taking shape on New Road near I-35

Two development projects in South Waco are attracting attention, with plans to add a new Sta…