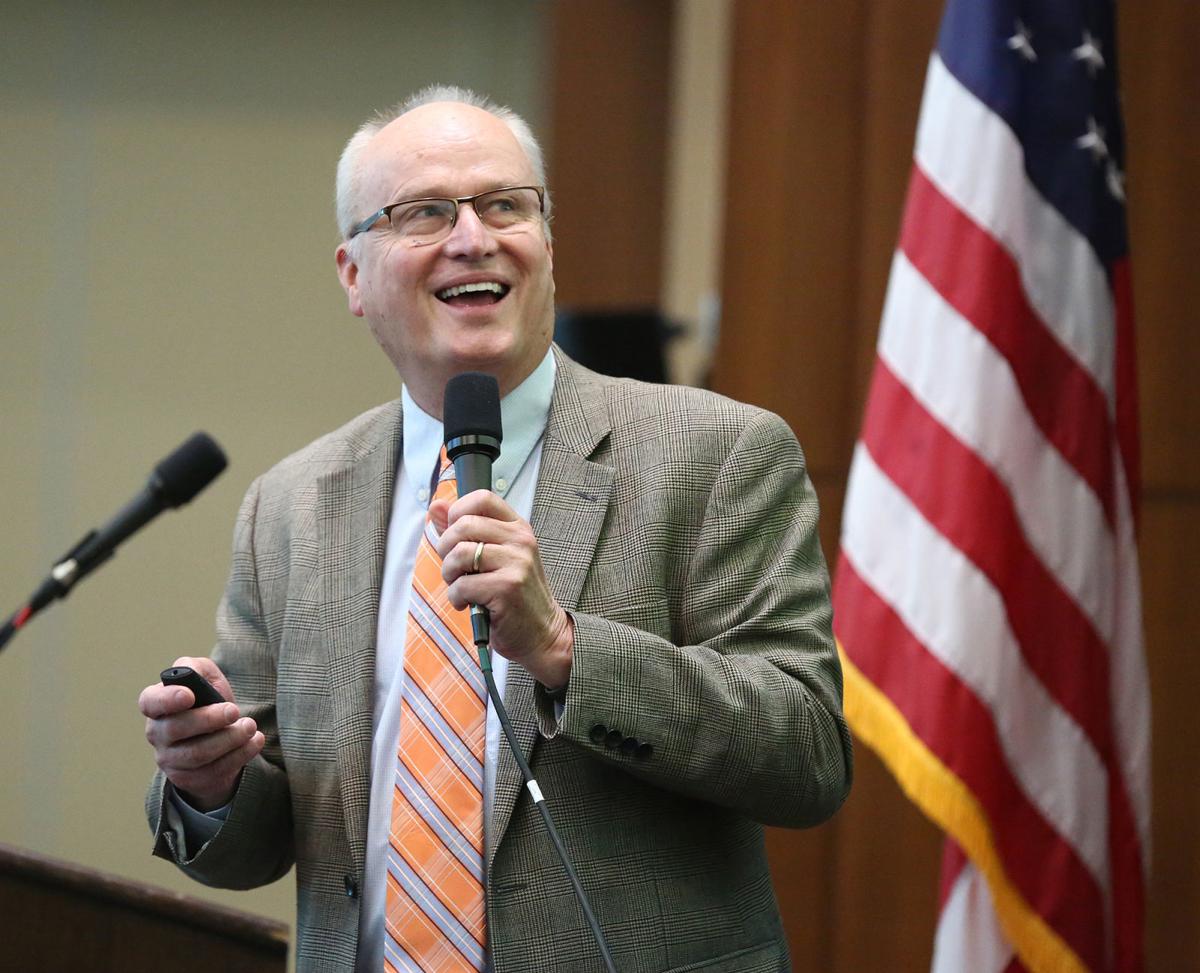 State Demographer Lloyd Potter speaks Thursday during the Greater Waco Chamber of Commerce’s State of the State event at the Baylor Club. 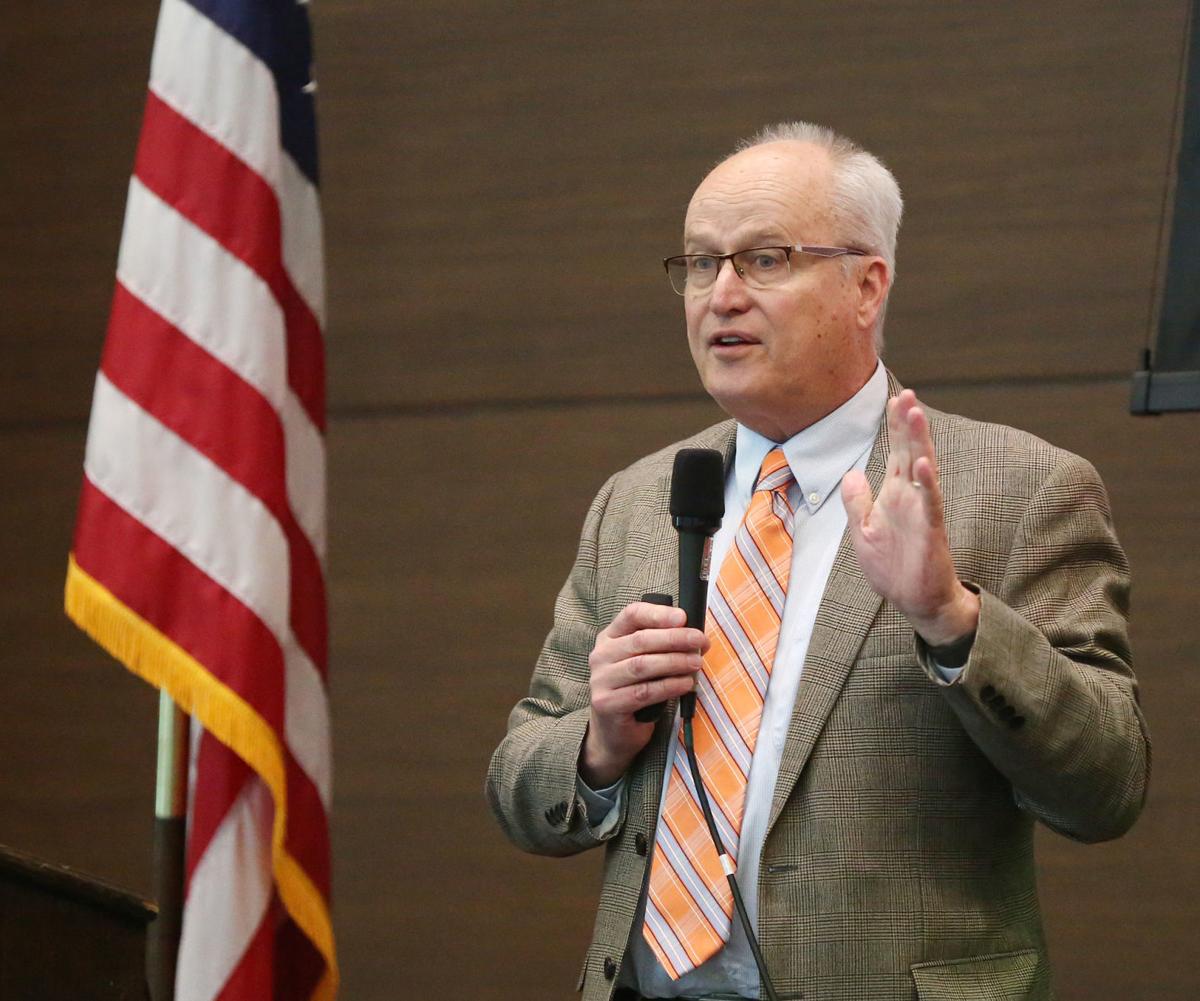 State Demographer Lloyd Potter speaks during a Greater Waco Chamber of Commerce State of the State event at the Baylor Club on Thursday.

State Demographer Lloyd Potter speaks Thursday during the Greater Waco Chamber of Commerce’s State of the State event at the Baylor Club.

State Demographer Lloyd Potter speaks during a Greater Waco Chamber of Commerce State of the State event at the Baylor Club on Thursday.

Texas has 300,000 more job openings than people to fill the positions, meaning the state needs the 1,000 people who move here daily from other states or countries. Without them, Texas’ economic boom might fall silent, Texas State Demographer Lloyd Potter said in Waco on Thursday.

Potter, speaking at the Greater Waco Chamber of Commerce’s “State of the State” event at the Baylor Club, said Texas is growing and becoming more ethnically diverse. Population growth among white residents has stagnated, while non-white Hispanic residents are becoming the state’s ethnic majority.

Also Thursday, state lawmakers Sen. Brian Birdwell, state Rep. Charles “Doc” Anderson and Rep. Kyle Kacal took part in a panel discussion, with chamber president Matt Meadors serving as host and moderator. Birdwell said he supports capping tax-rate increases on businesses similar to those the Legislature imposed on residential property. His response was to a question by Meadors about lowering the tax burden, or at least maintaining it, while still providing adequate tax funding for schools around the state.

Potter said the growing Hispanic population stands to create challenges and opportunities. Texas, like states from coast to coast, is suffering a shortage of labor, both skilled and unskilled. It could tap the resource represented by this young talent to continue its dominance in economic development nationally.

A potential concern, he said, is that statistics show adult Latinos on average have lower educational attainment than do other ethnic groups.

Efforts to keep youngsters in school probably need to be bolstered, and Hispanics already represent a majority among the school-aged in Texas.

Reports prepared by the Texas Demographic Center at the University of Texas at San Antonio show that Texas’ Hispanic population likely will pass its white population between 2020 and 2025. By the year 2050, it estimates, there will be 7 million more Hispanics than whites in Texas. The Hispanic population in Waco and McLennan County also is rising, with non-white Hispanics representing 39% of the countywide population in 2017, while whites made up 42% and blacks 12%.

”Every year since 2006, Texas has added more population than any other state,” according to the material from the Demographic Center.

Population trends carry much weight as the 2020 Census looms. Potter said Texas stands to gain three congressional seats because of its surging population, but cautioned that communities including Waco need to spread the word to residents about the importance of completing census forms.

He said Texas stands to lose $300 million annually in federal funding for an undercount of only 1%. His office estimates that one in every four people living in Texas are in “hard-to-count neighborhoods.” A chart shows areas of Waco, for example, where it is predicted that 30% to 48% of residents likely would not respond to mailed out census forms.

Digging down, Potter said the number of people living in Texas increases 1,039 daily, contributing to a population growth rate of 14% since 2010 compared to the nation’s roughly 6%. That number reflects 524 more births than deaths daily, 288 people moving to Texas from around the world and 227 moving to Texas from other states. He said Asians actually are outpacing those from Latin American countries in relocating to Texas.

Julian Alvarez III, commissioner representing labor on the Texas Workforce Commission, said during his presentation and in interviews Thursday’s event that Texas is enjoying historic lows in unemployment, 3.4% statewide and 3.1% in McLennan County. Still, jobs are going begging, he said.

That in mind, the state is stepping up efforts to provide training and job placement services to disenfranchised job seekers, including the disabled, those leaving jail or prison, military veterans and foster care residents, Alvarez said.

”This should help us meet our needs,” he said in an interview.

Anthony Billings, with Workforce Solutions for the Heart of Texas, attended Thursday’s presentation and said it provided useful information.

There are companies hiring locally, and he sees people daily in search of work, but often there is a disconnect between jobs available and skills, Billings said.

Likewise, local homebuilder Scott Bland said contractors find themselves in dire need of carpenters, electricians, masons and HVAC installers. He said many local builders are willing to provide their own customized training to job applicants.

Asked about the growing Hispanic population and the importance of Latinos to construction in Central Texas, Bland said, “We are in such a workforce crisis, everyone is important to us. We’d love to see more women in trades, more African-Americans, more Hispanics, more whites. We have $50,000 to $60,000 jobs we can’t give away. That’s why the Greater Waco Advanced Manufacturing Academy (operated by the Waco Independent School District) is so important. It’s available to students all over Central Texas, and we have our first graduating seniors this year.”