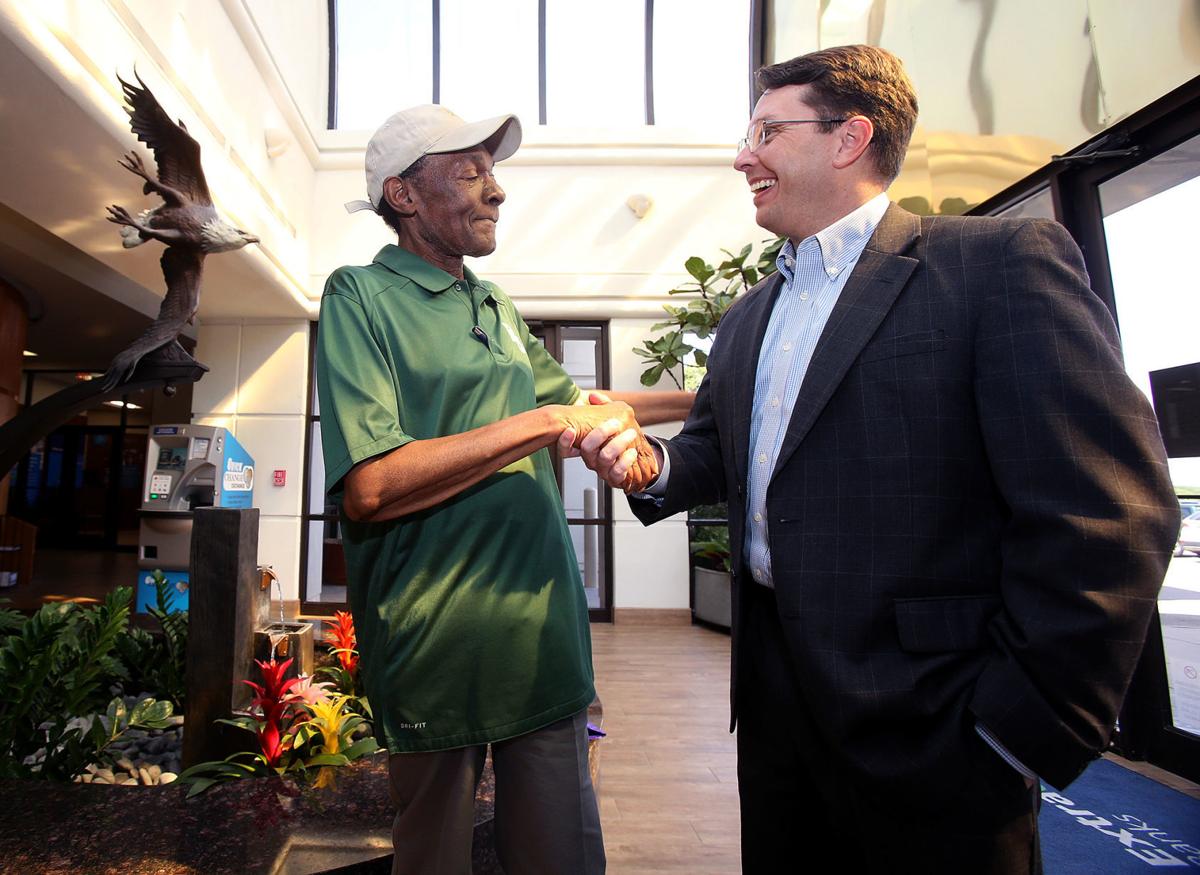 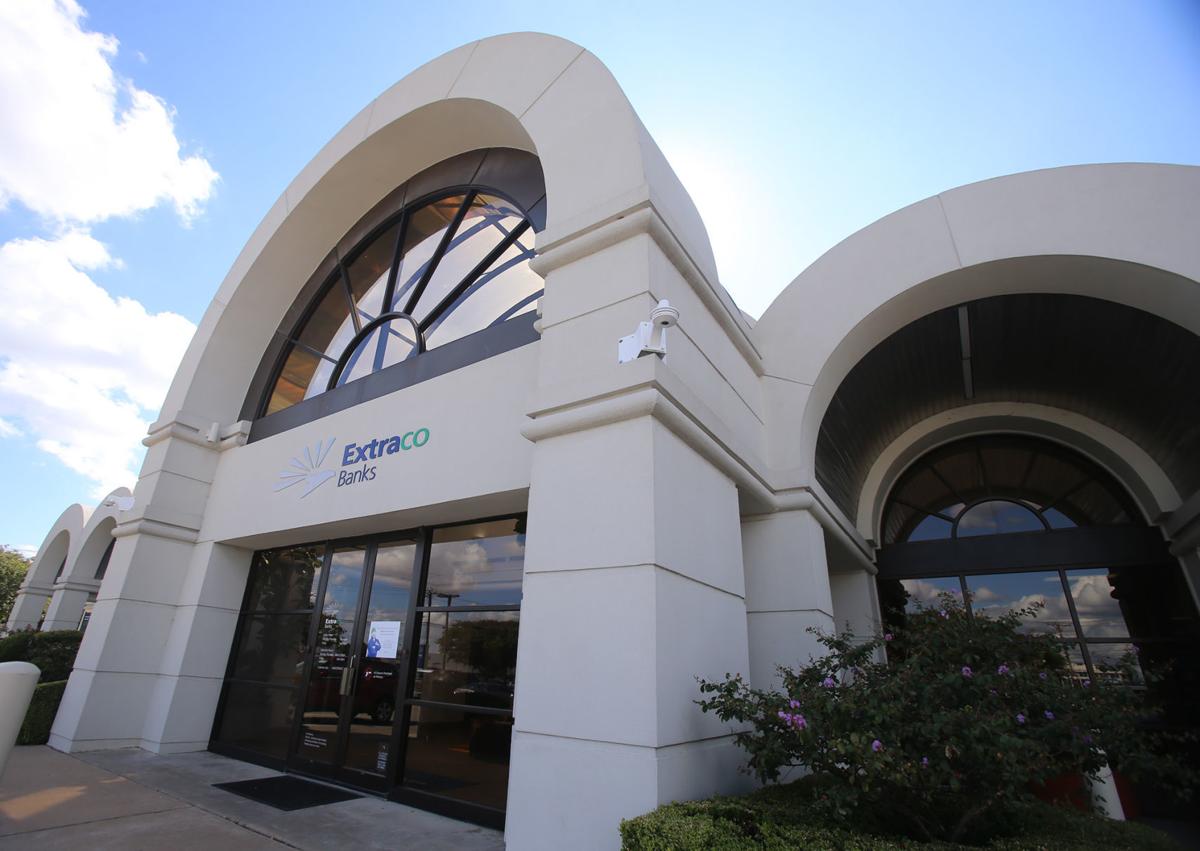 Extraco headquarters at 1700 N. Valley Mills Drive, where Pearson will set up his refurbished shoeshine stand.

Extraco headquarters at 1700 N. Valley Mills Drive, where Pearson will set up his refurbished shoeshine stand.

Robert Pearson, who unceremoniously was booted out of shoeshine job at the Waco Regional Airport after 14 years, can look forward now to working banker’s hours.

The 74-year-old Pearson, who is legally blind in one eye, was flooded with phone calls, visitors to his apartment and offers of help after a Tribune-Herald story posted Monday evening told how the airport manager chose not to renew Pearson’s vendor contract and told him he had to have his stand cleared out by last weekend.

Social media posts lambasted city officials for their treatment of Pearson, who has developed a wide, diverse network of friends and supporters during his years offering shines, blessings and goodwill to those he came in contact with.

Someone opened a GoFundMe page for Pearson and former Waco Congressman Chet Edwards, who has known Pearson for years, chipped in the first $100. Another friend of Pearson’s has offered to refurbish his shoeshine bench with new paint, new chairs and new carpet, Pearson said.

After learning of Pearson’s airport ouster, Chris Kincaid, an executive vice president at Extraco Banks, said he got a call from Senior Vice President Sam Brown, a former staffer in Edwards’ congressional office, who asked if there was anything they could do to help Pearson. Kincaid told Brown he was already working on it.

Kincaid and Brown met with Pearson on Thursday afternoon and offered him a free, choice lobby location for his shoeshine stand at the Extraco Bank at 1700 N. Valley Mills Drive.

“The Waco airport’s loss will be Extraco’s gain,” Edwards said. “Mr. Pearson is an inspiration to his many local customers whose shoes and outlook on life have been brightened by this good man’s hard work and optimism. He lost his vision in one eye because he could not afford timely medical care, but he has never lost sight in caring for his friends and customers, and that’s why he makes our community a better place.”

Pearson is excited and feels blessed by the bank’s offer and said he was impressed with the bankers’ warmth and professionalism.

“They took me in with open arms,” Pearson said. “During the last few days people were coming and visiting me and I got 50 to 60 phone calls each day for the past few days. I got maybe three hours of sleep with all the phone calls. But when I talked to Mr. Kincaid and Mr. Brown, it was unbelievable. I could feel the spirit in their heart.

“I was all shook up, and when I met both of them yesterday, the meeting, the love, the happiness, the Christianity, the blessings, I was just showered with blessings. I told them that if this is a dream, I don’t want to wake up.”

After his stand is refurbished, Pearson said his loyal customers and new customers can find him in the lobby of the bank starting Sept. 30 from 9 a.m. to 3:30 p.m. Monday through Friday.

“I feel so abundantly blessed to be in a great, positive place with a super positive environment,” Pearson said. “I am happy and thankful to be there. They reached out with both hands to me and helped me, and I will, in return, do the same thing.”

Kincaid said he is pleased to welcome Pearson to the bank.

“I had met Robert before and so had some other folks around here from visiting the airport, and we have always thought very highly of him and thought that we would like to help him out if we could,” Kincaid said. “We think it will be a good partnership. It sounds like he has quite the following, and he seems like a hard worker and an outstanding guy.”

Baylor University basketball coach Scott Drew and Pearson became friends during the team’s frequent trips flying in and out of the Waco airport.

“Robert is a great ambassador for Waco,” Drew said. “He has a great smile, he’s always in a great mood, always energetic and does a great job with the shoeshine. He has been a blessing to Waco, in my opinion.”

Pearson’s stand fell victim to the city’s quest to standardize its contracts with city vendors, Airport Director Joel Martinez said. Martinez notified Pearson in August that the city would not renew his contract, which had been on a monthly basis for the past 10 years.

“We are constantly trying to ensure the airport is operating at a certain standard and we are just trying to make sure that all our lease holders are operating under similar, standardized leases,” Martinez told the Tribune-Herald last week. “We want to ensure we are upholding the standards that represent the city in the best light. Some of those are challenges for some businesses, such as insurance requirements, maintenance requirements, hours of operation, things like that.”

Martinez said he is striving for the airport to become a “revenue-generating department,” adding that is why he re-evaluated Pearson’s and other vendors’ contracts with the city.

“Part of the challenges (Pearson) had was based on revenue,” Martinez said. “His revenue had to exceed a threshold and that threshold was set really high, and for the past few years, he hasn’t made enough. Consequently, he hasn’t paid the city anything. So we said, ‘Wait a minute. You have someone in a prime location and you have all the amenities, and in a sense, he is not really paying anything.’ So we thought we needed to fine-tune that operation.”