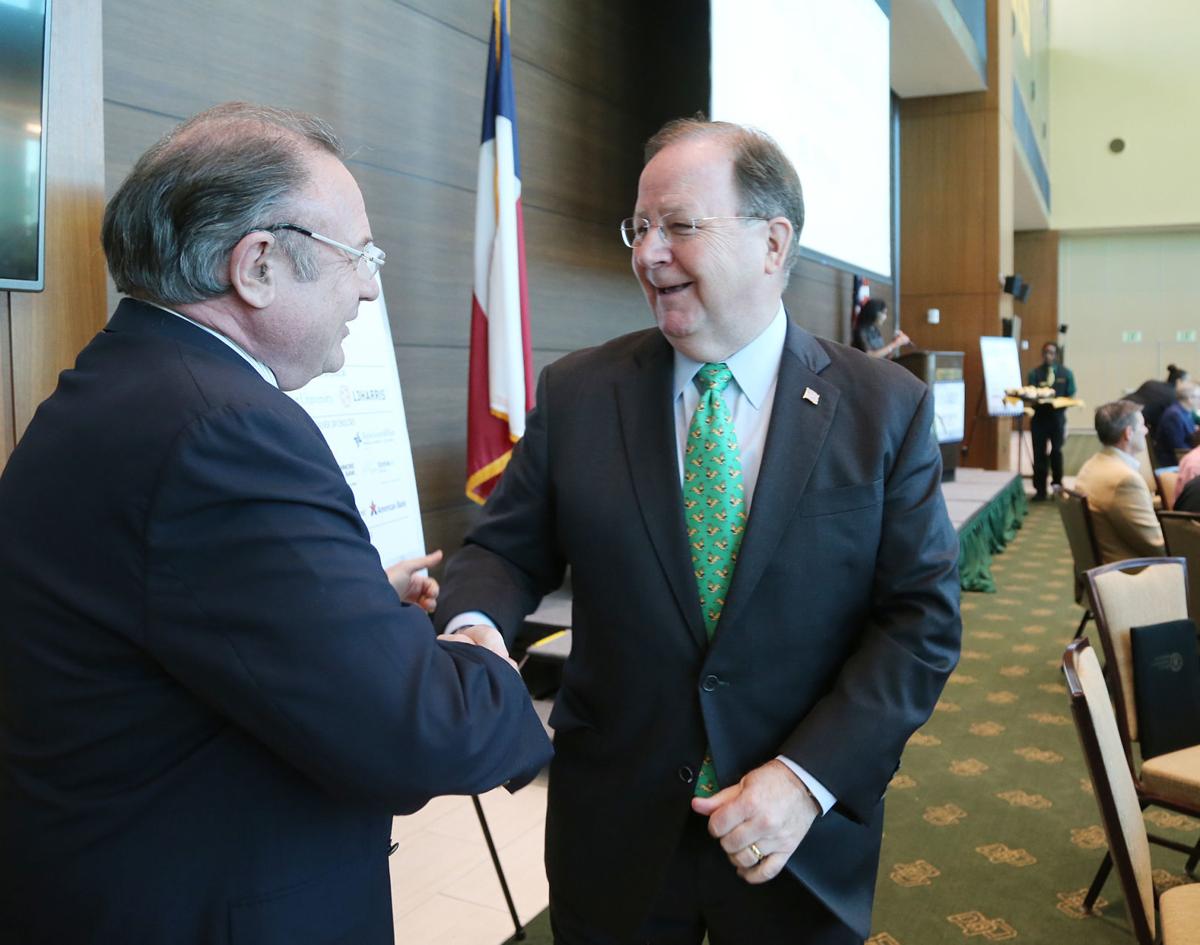 Economist Ray Perryman (left) shared the stage with U.S. Rep. Bill Flores (right) at the “State of the Nation” event. 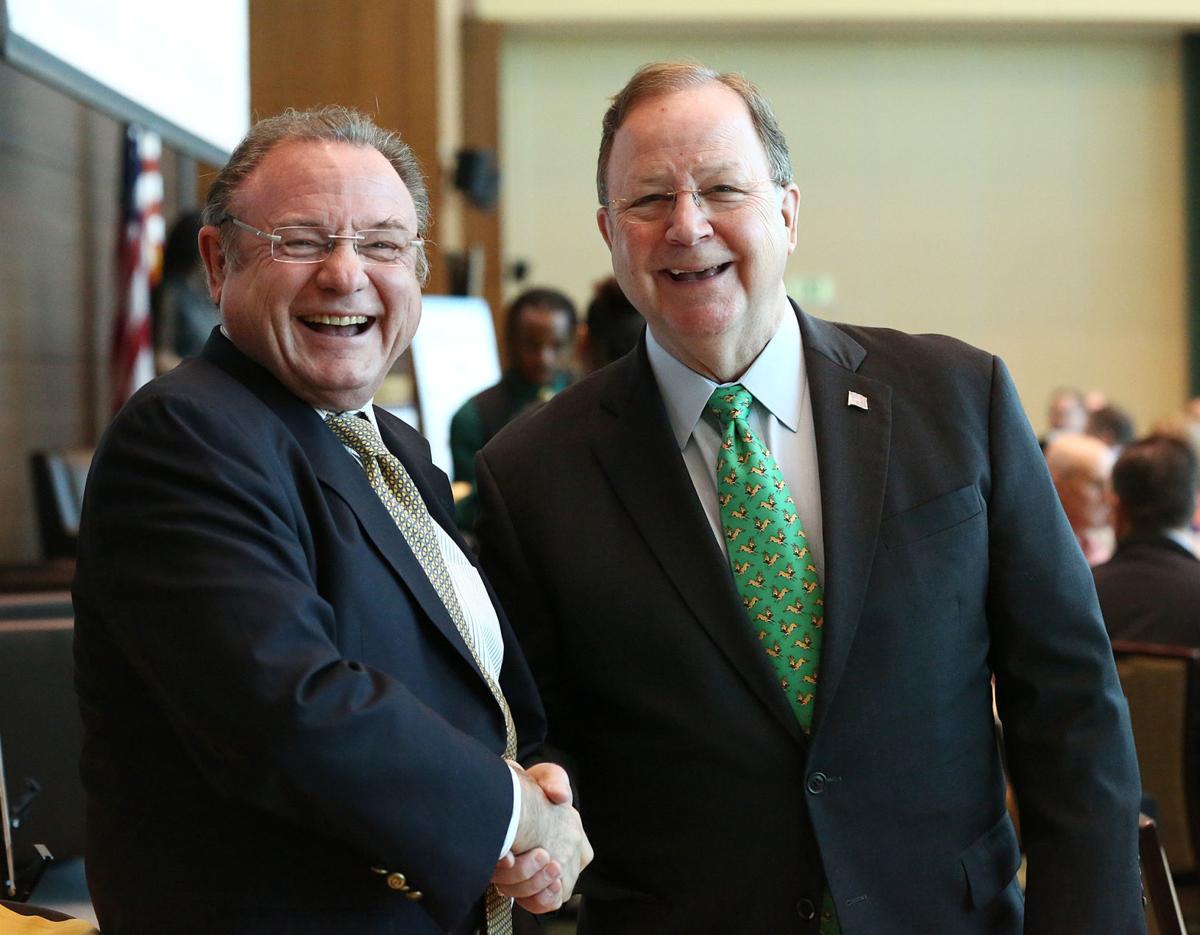 Economist Ray Perryman (left) shared the stage with U.S. Rep. Bill Flores (right) at the “State of the Nation” event.

Passion among Democrats to “trump Trump” has shattered bipartisan cooperation in the U.S. House, spelling doom for meaningful legislation on immigration, trade, climate issues and the soaring national debt, U.S. Rep. Bill Flores said at a “State of the Nation” luncheon Monday in Waco.

Flores, whose district includes Waco, called Congress a “polarized mess” and said lawmakers’ self-imposed gridlock threatens the growth of the economy. Speaking at the Baylor Club, he said Texas in particular finds itself in the line of fire as House Majority Leader Nancy Pelosi delays a vote on the U.S.-Mexico-Canada Agreement.

Flores and Waco-based economist Ray Perryman headlined the session, which was sponsored by the Greater Waco Chamber of Commerce and drew about 200 to hear about national issues and their impact on Texas. Both speakers agreed on the importance of the new trade pact.

Endorsed by business groups and the Waco-based Texas Farm Bureau, the USMCA was signed by parties to the treaty almost exactly a year ago. But it has stalled in the U.S. House as Democrats have insisted it include language that guarantees labor and environmental protections. The agreement would replace the 25-year-old North American Free Trade Agreement.

“If Pelosi were to bring it forward tomorrow, it would pass the House. It has bipartisan support,” said Flores, who joined Waco-based economist Ray Perryman in addressing national issues and their impact on Texas.

Flores dismissed the validity of ongoing objections, characterizing them as a red herring. The bottom line, he said, is that Democratic leaders do not want to hand Trump a political victory as the 2020 election season approaches.

Mexico is the only country to ratify the pact so far.

The Texas Farm Bureau posted a policy statement on its website saying more than 950,000 Texas jobs are supported by trade with Mexico and Canada. Last year, the state exported more than $137 billion worth of products to its North American partners, “accounting for 43 percent of Texas’ total exports to the world,” the organization reported.

It also contains provisions Democrats long have supported, including one that mandates more automobile parts be manufactured in North America. Another strengthens labor unions in Mexico, the New York Times reports.

Negotiations heated last week and continued through the Thanksgiving holidays, prompting Pelosi to suggest tweaking is winding down.

“It is vital to Texas that this get done,” Perryman said Monday. “It is more important to have an agreement in place than to quibble over nuances.”

Perryman and Flores focused on a wide variety of threats and opportunities to the economy of the state and nation.

Perryman said Texas’ stunning population growth could serve it well in filling labor demands from business and industry. But a trained workforce is a necessity, Perryman said. He said shifting demographics reveal that 52 percent of the school-age students in Texas are Hispanic, but their families control less than 5 percent of the state’s wealth. Starting with this economic disadvantage, he said, these youngsters face challenges others may not.

“If they do not receive training, this becomes a problem,” said Perryman, in an interview after the session. “If they do, it becomes an opportunity.”

He said the preponderance of legislation in the 116th U.S. Congress “is a finger in somebody’s eye,” not a solution to a chronic problem. He said its list of accomplishments falls well below that of the 115th session, “which the Wall Street Journal called the Congress of consequence.”

Flores said he is a free-trader to the core and favors a playing field with no tariffs, no barriers and no subsidies. Unfortunately, he added, China does not abide by the rules of the world marketplace. He said foreigners find it almost impossible to establish a business in China, which demands more than 50 percent Chinese ownership and the transfer of technology.

“If you don’t transfer it, they steal it,” said Flores.

He said there is no doubt the Chinese are hurting under Trump’s tariffs. He said his own visit to Beijing revealed “see-through high-rises,” or office towers without tenants, and an auto plant suffering more than a 20 percent decline in revenue.

He said the best approach to dealing with China would be U.S. involvement and influence in trade agreements around the world, including those with its North American neighbors, with the European Union and as part of the Trans-Pacific Partnership, a pact Trump balked at joining. Flores said he would have attempted to salvage U.S. involvement.

Flexing its influence as part of these alliances, said Flores, the U.S. could set bad-actor China alone on the world stage, its transgressions in full view.

Local, state, and federal Republican legislators and this WH is the problem not the solution for this country. Those that vote Republican have to realize the this party legislates for the wealthy and corporations. They do not care about the middle class, poor, women's rights to their own bodies, affordable health care, quality public education, equal rights for race or gender, voting rights, LGBT rights, or a living wage. VOTE OUT these dinosaurs that care more about Russia getting what they want than Americans. VOTE Democrat to bring back honesty, civility, trust, and security for our country by looking at facts to guide their legislation. Russia DID commit a cyber attack on our country and Republicans are in agreement with Trump and Russia that they didn't despite ALL America's security agencies and Senate investigation saying it was Russia.

Vote Democrat to stop unconstitutional gerrymandering, caging children, forcing women to have a child, keeping minorities and the poor marginalized.