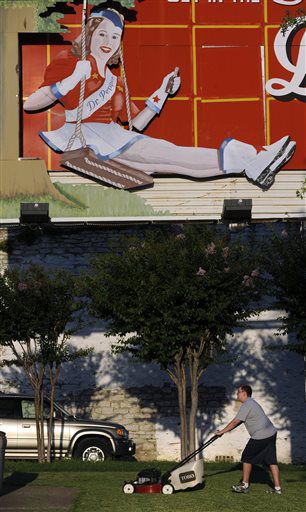 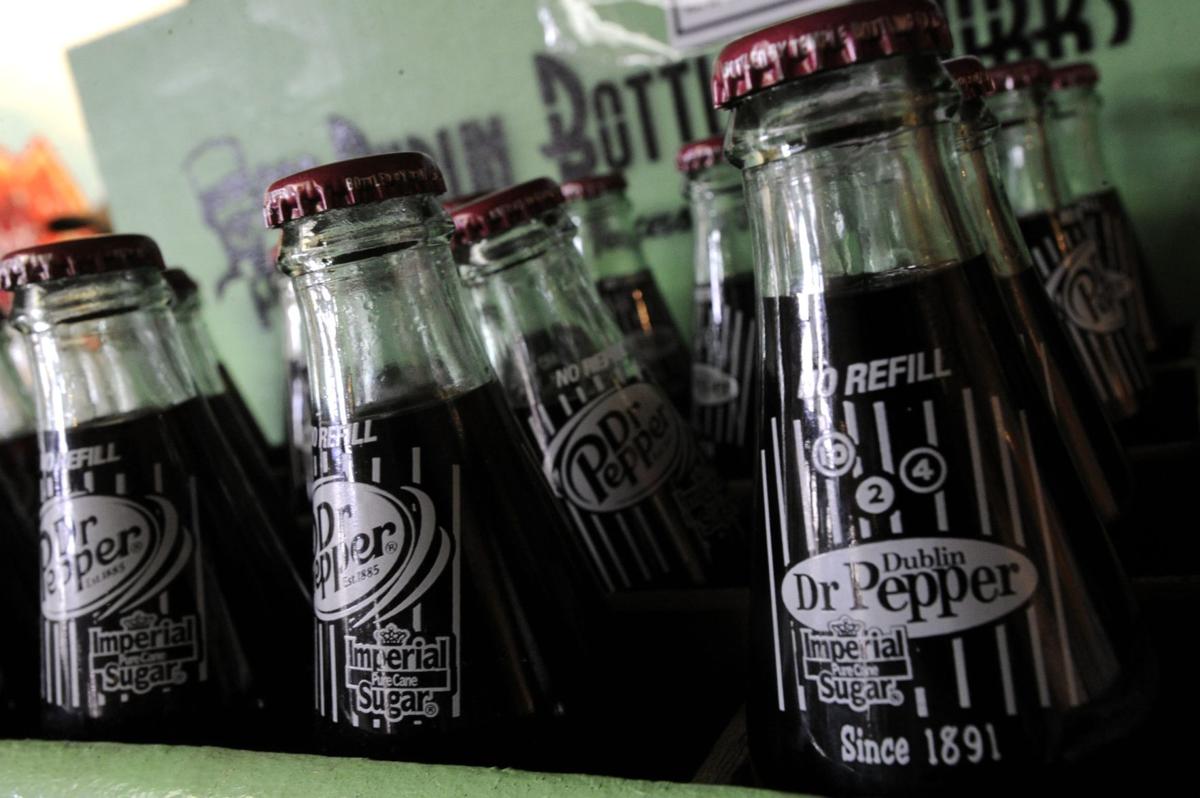 In this June 3, 2016 photo, Bottles of Dublin Dr Pepper from one of the last bottling runs in 2011 are seen at Old Doc's Soda Shop in Dublin, Texas. The bottles are being sold as souvenirs and are marked "Not For Consumption." Dublin Bottling Works, the former Dublin Dr Pepper bottler, marked its 125th anniversary June 11. 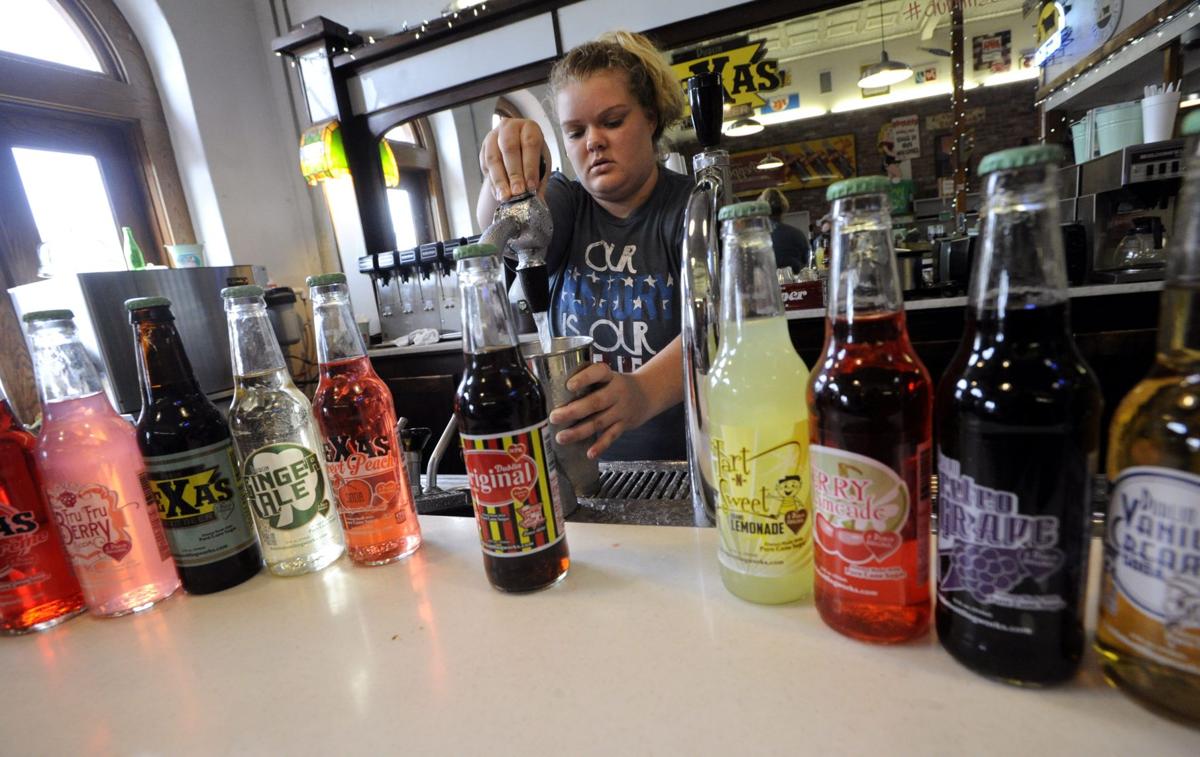 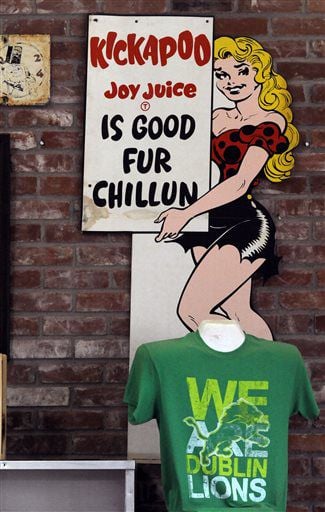 In this June 3, 2016 photo, Bottles of Dublin Dr Pepper from one of the last bottling runs in 2011 are seen at Old Doc's Soda Shop in Dublin, Texas. The bottles are being sold as souvenirs and are marked "Not For Consumption." Dublin Bottling Works, the former Dublin Dr Pepper bottler, marked its 125th anniversary June 11.

DUBLIN — Pretty Peggy Pepper lost her head, but it wasn't over a boy.

"In March, we had a tornado and it took the roof off the fire station and the roof off the city hall, which was already being repaired from our storm last year," said Luanne Schexnider, executive director of the Dublin Chamber of Commerce.

The decapitated mascot is in the pocket park at the intersection of Blackjack and Patrick streets, called the Corner Lot by some and the Dublin Pretty Peggy Pepper Park by others. The centerpiece namesake for the latter park title is a large billboard of a young lady dressed like a Rangerette but wearing a garrison cap rather than a Stetson.

"That was on a Tuesday and we had our St. Patrick's (celebration) on the next Saturday," Schexnider told the Abilene Reporter-News (http://bit.ly/1UA0B4B). "Peggy lost her head sometime in that storm."

What's left of the display faces west, still greeting visitors entering town after Texas 6 turns into Blackjack Street. The head and upper torso are missing, but the legs and boots still sit on the swing. It just doesn't rock beneath its tree anymore, except when the wind blows.

Each year on the second weekend in June, Dublin used to change its name to Dr Pepper in honor of being the home of the soft drink's oldest bottling plant. But after a 2011 lawsuit between Dublin Dr Pepper and Dr Pepper/Snapple resulted in the loss of the beverage's local production, the town and the bottling plant have done their best to move on.

In some ways, what to do about Pretty Peggy Pepper reflects that.

"I know there are those people who would really like to keep it as the icon of this area," Schexnider said, adding not everyone in town shares those feelings.

Manager Kenny Horton's business card describes him as the "Head Soda Jerk" for Dublin Bottling Works, which is the name the Dublin Dr Pepper took after the lawsuit.

"A big storm knocked her head off, but we found it," he said of the sign. "It's been a focal piece for a lot of people who come into town.

Horton said the sign was installed at the park in 1998 through the efforts of William P. Kloster, the former owner of the plant who died the following year.

"It would look a lot better than it does now, that's really why we're trying to get all the red tape figured out so we can know what to do with it," Horton said. "There's always a good time for change; so to do something new, maybe something that incorporates Pretty Peggy Pepper from our history, or that brings us into a new era but yet holds to the history of the company, I'm cool with."

Saturday, June 11, marked the 125th anniversary of the bottling plant. Pre-lawsuit, that would have been an excuse for a wild blowout, but Dublin Bottling Works efforts last weekend were focused on what's ahead.

"We're in the process of getting equipment for a brand-new bottling facility, we've kind of put all of our funds toward that," Horton said. "In order to do that, we decided to go a little bit more low-key, there's been years past where we've spent upwards of $100,000 on the celebration."

"A lot of people still want to come to Dublin for that," she said.

Time has moved on for the bottling plant, too. No longer restricted to the 44-mile radius it was limited to for selling Dublin Dr Pepper, the presence of Dublin Bottling Works products has increased exponentially in the Big Country since the lawsuit.

"Absolutely, West Texas has been one of our fastest-growing areas of late," Horton said. "We're in quite a few places around Abilene."

The History Channel's "American Pickers" television show featured a segment on the museum this month, too, with the show's hosts purchasing some items from the museum's back-stock from a warehouse.

Also from one of the warehouses is a display in the company store of 8-ounce bottles of Dublin Dr Pepper from the last bottling run. Going for $4.99 each, they are also labeled "Not for Consumption."

"We were cleaning out a warehouse the other day and found a few cases," Horton said. "If somebody wanted a little token of our history, we figured we would let a few of those go."

"You can still taste the semblance of the old flavor, but they're quite flat. They are over five years old," he said. "It's not as bad as you might think they might be, but you can definitely tell they have some age to them."

So it is time to stop hoarding and start drinking.