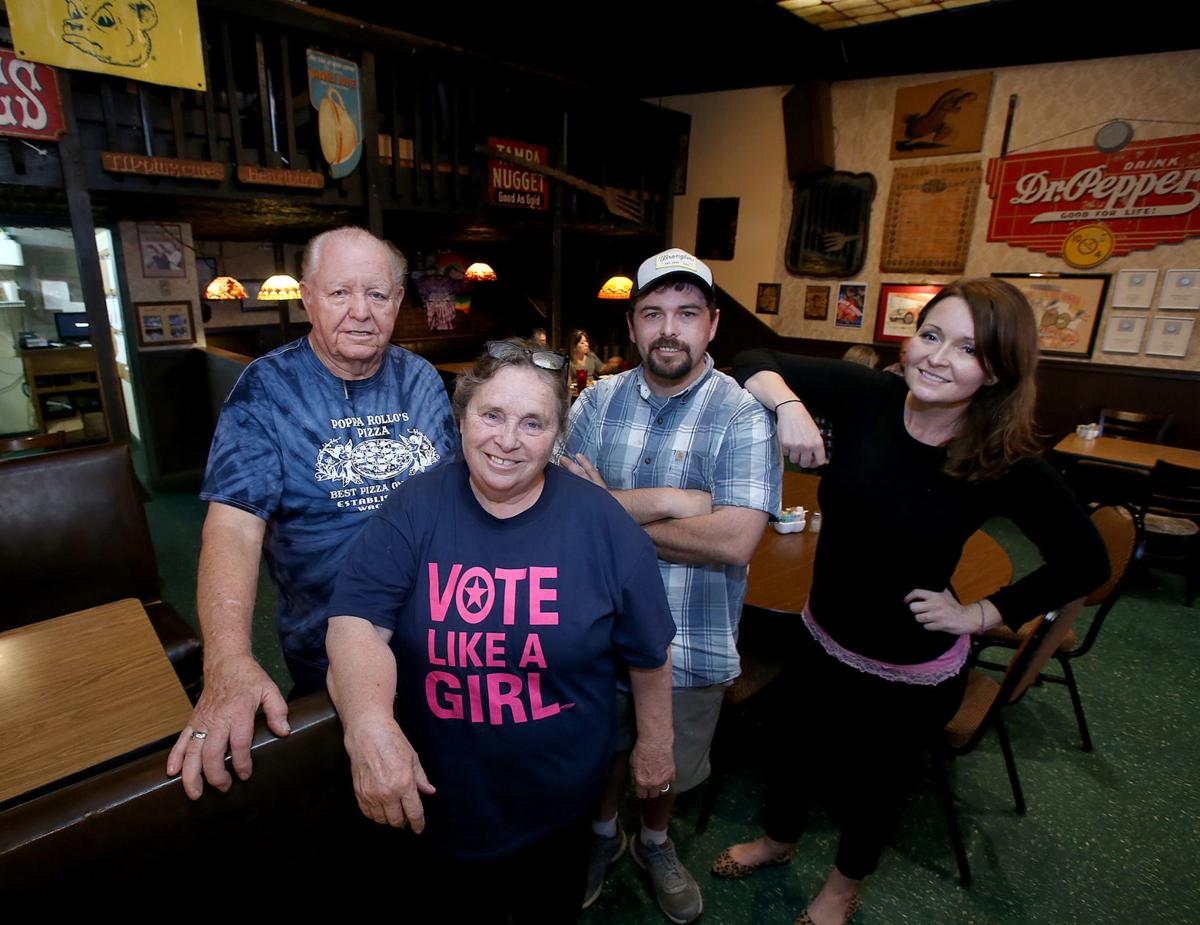 Roland and Mary Duty (left) with their children Caleb and Susan. 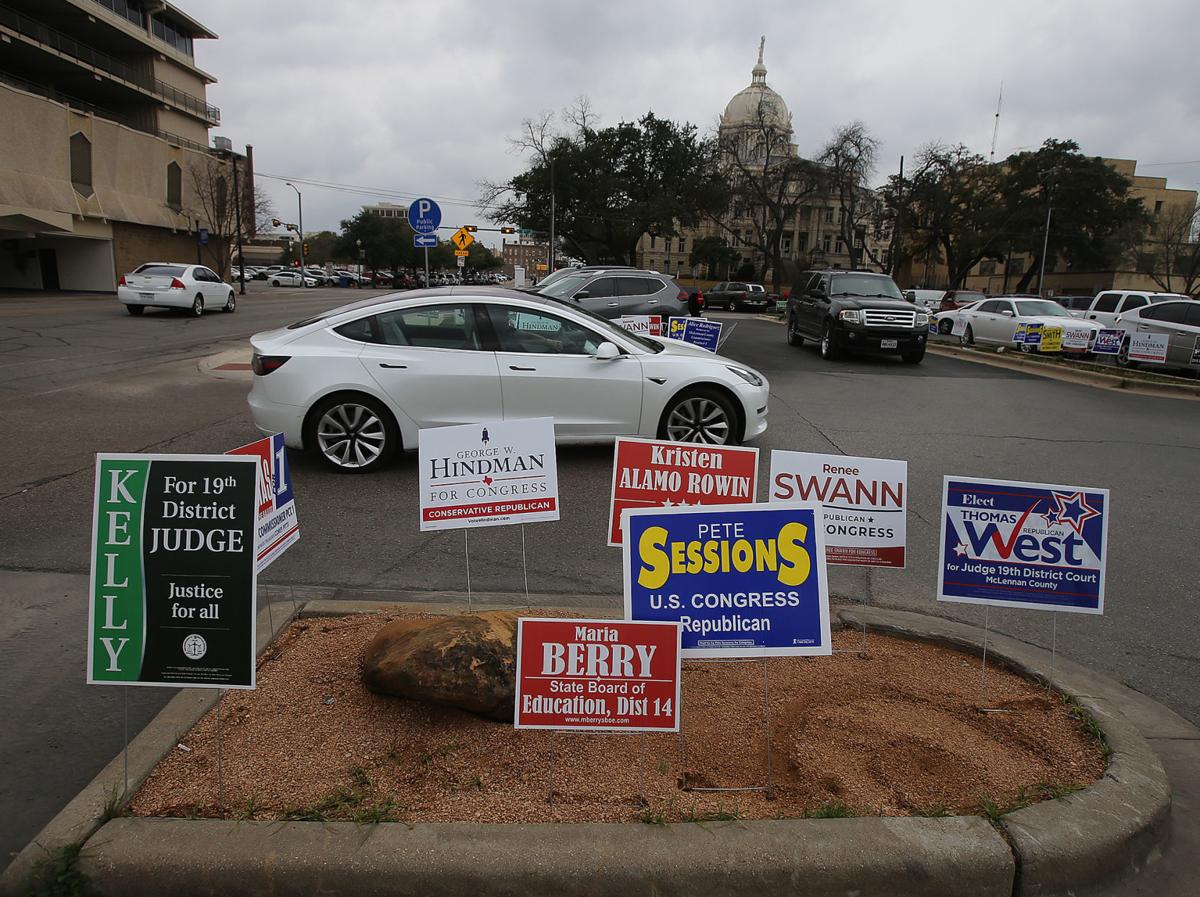 Campaign signs outside the Courthouse Annex building on Fourth Street and Washington Avenue.

Roland and Mary Duty (left) with their children Caleb and Susan.

Campaign signs outside the Courthouse Annex building on Fourth Street and Washington Avenue.

Making pizza keeps the Duty family reading from the same menu, but their political stances as they go to the polls Tuesday are as diverse as a brokered convention.

Of the family behind Poppa Rollo’s Pizza, Mary’s liberal, Roland’s conservative and son Caleb just tries to keep the peace while making a profit at his own pizzeria across town.

“I’m down the middle, a Libertarian you might say,” offered Caleb, speaking by telephone between errands on Monday, the day before the lines form at the polls for Super Tuesday.

Mary Duty, chairwoman of the McLennan County Democratic Party, earned her liberal chops campaigning for George McGovern, the lefty who lost the presidential election to Richard M. Nixon in 1972.

When she’s not driving to Moody or McGregor to erect campaign signs touting local Democrats, she can whip up a pizza at her family’s 50-year-old parlor on North Valley Mills Drive. Mary waited tables while majoring in philosophy at Baylor University. She and owner Roland hit it off, and the rest is the history of a two-party household.

Politically speaking, Mary and Roland are the odd couple. Roland’s a history buff who calls the Civil War an act of northern aggression and tolerates left-leaning functions inside Poppa Rollo’s to keep his friends close but his enemies closer, as suggested by ancient Chinese military strategist Sun Tzu.

Of the current crop of Democratic presidential candidates, Roland said, “There is a certain element pulling the party to the outer limits.”

Asked about President Trump’s re-election chances, he said, “The Democrats have encircled themselves, are pointing weapons at each other and will commence shooting until somebody comes out the winner.”

“Trump may become the innocent victim,” Roland added with a laugh.

How do these mixed messages play with customers?

“We’ve always said, ‘In our family, I sleep on the left side of the bed, and Roland sleeps on the right side of the bed.’ It’s been that way for generations,” said Mary Duty.

“My Republican friends’ money spends just as well as my Democratic friends’ money. ... When I was approached about becoming party chair, I sat down with my family. There were no objections raised.”

“I do understand the business of making a dollar. I like everybody’s money, and this can become a touchy situation,” she said. “To me it’s a decision that rests exclusively with the business owner.”

Duty said her political stance does not always sit well with others.

She recalls an occasion when she recruited youngsters to assemble 800 sandwiches for those attending a Nobody’s Fool sex education program in Waco sponsored by Planned Parenthood. Her efforts caught flak from those who took issue with the program’s goals and her involvement.

“We’ve been taken to task, and we try to respond in a decent way,” she said.

Another time, said Duty, a customer created a scene over a message written in Arabic and posted above the Poppa Rollo’s bar. A gift from a former employee from Yemen, she said, the wording conveyed a blessing.

“I thought it was sweet,” said Duty. A patron disagreed.

“The guy went nuts, was getting all hot and bothered,” she said. “We didn’t take it down. I put a picture of my son in his uniform right beside it.”

That would be Marine Cpl. Caleb Duty, who completed two tours of duty in Iraq, returning to the states and his hometown in 2009.

He grins and bears his parents’ devotion to contrasting political causes.

“I think a pizza parlor, a restaurant, is a place to enjoy yourself, maybe agree to disagree over a few beers, have a civil discourse without resorting to carrying pitchforks,” Caleb Duty said. “I believe in hand-ups, not handouts. I think we all have a responsibility as human beings to take care of each other, to give to one another without someone or something in the middle taking their cut.”

Visitors to 900 Degree Pizzeria will notice a couple of signs for local Republican candidates on the wall near the ordering station. One touts Robert Cervenka, a Precinct 1 McLennan County commissioner candidate, while the other supports Will Jones, the incumbent running to keep his Precinct 3 seat on the commissioners court.

Duty said his friendship with Cervenka transcends politics, the candidate having supported his efforts to hold a music festival honoring veterans.

Meanwhile, he said he has heard good things about Jones.

Duty recalled a particularly awkward moment when, while sharing a car ride with friends, one occupant began bad-mouthing Poppa Rollo’s in a loud and profane way, apparently oblivious to Caleb’s membership in the family.

“I can assure you they are good people,” was his understated response.

Roland Duty may disagree with most of what Mary espouses in the political arena, but he defends her rights and her credentials.

“She’s not a lefty loony,” he said. “I would describe her as a centrist. She knows where money comes from. She comes from the country. She knows what that stick is with the blade on the end that you use when walking up and down a row of something that needs to be eliminated.”