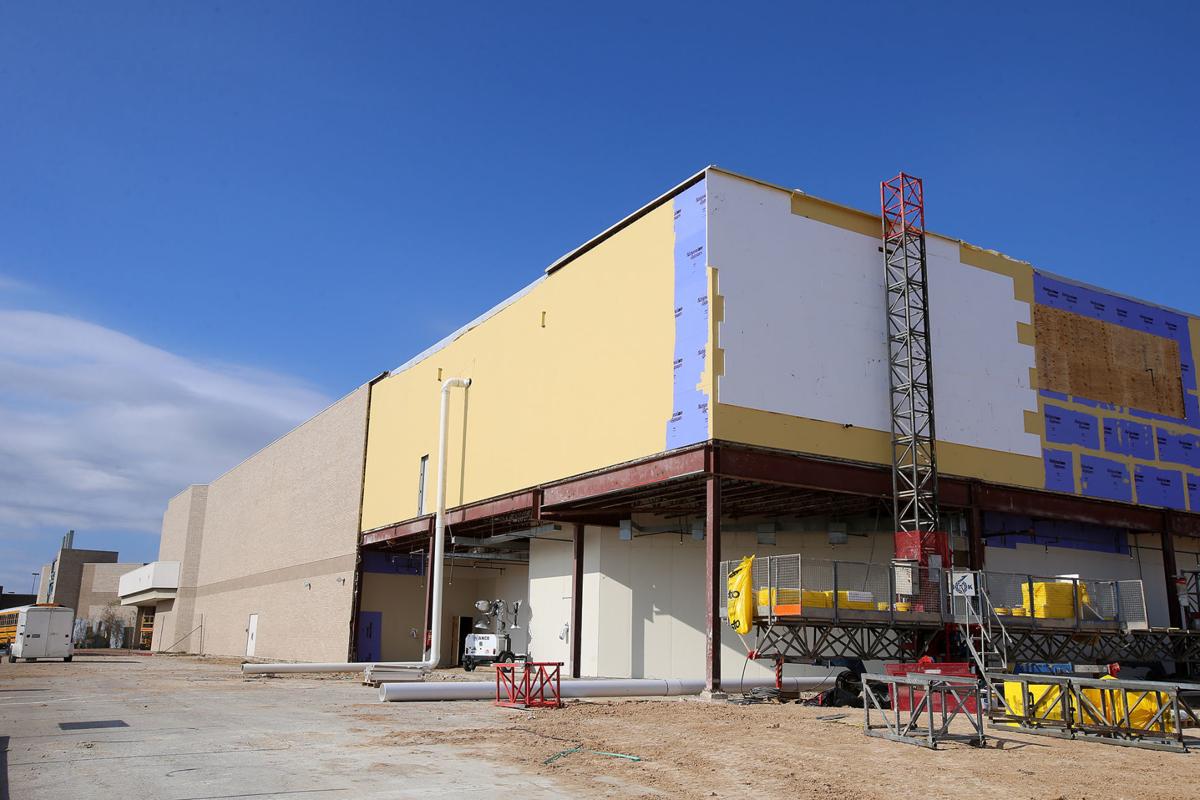 Work is underway on the former Sears space at Richland Mall. Dillard’s is planning to make the move there in May, and a construction permit for the remodel estimates the cost at $8.3 million. 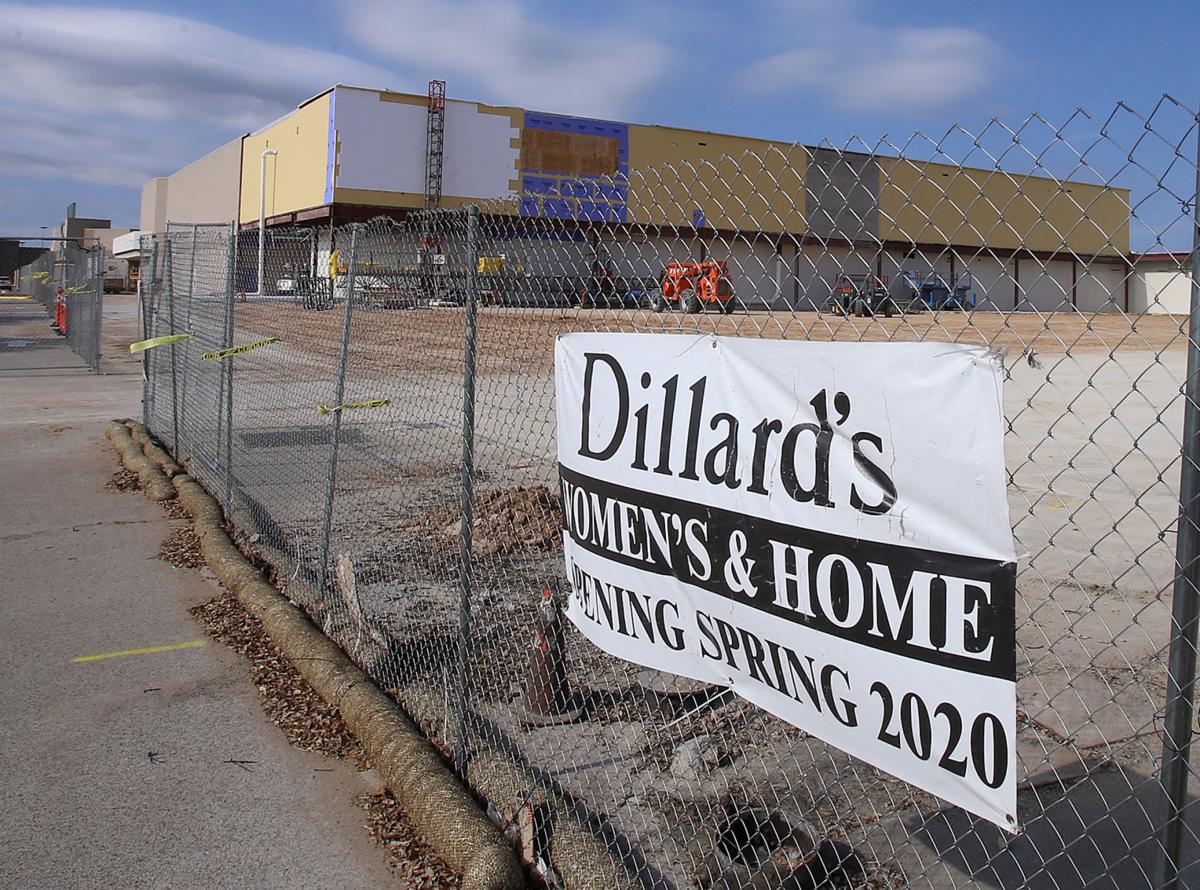 The $8.3 million Dillard’s remodel of the former Sears space at Richland Mall includes a 20,000-square-foot addition, which would bring the total to about 177,000 square feet. Dillard’s will move out of its current women’s location but keep a presence in its current men’s location at the mall.

Work is underway on the former Sears space at Richland Mall. Dillard’s is planning to make the move there in May, and a construction permit for the remodel estimates the cost at $8.3 million.

The $8.3 million Dillard’s remodel of the former Sears space at Richland Mall includes a 20,000-square-foot addition, which would bring the total to about 177,000 square feet. Dillard’s will move out of its current women’s location but keep a presence in its current men’s location at the mall.

Dillard’s will spend more than $8.3 million remodeling and expanding the former Sears space in Richland Mall, with the goal of opening a new Dillard’s department store there in May that will feature an expanded line of James Avery, Kendra Scott and Southern Living Home merchandise.

“There will be a complete remodel on the inside, and we plan to place there in Waco our latest prototypes and concepts,” Dillard’s spokeswoman Julie Guymon said by phone. “We’re putting our best foot forward and think our customers will love it.”

Waco’s Sears store, an anchor since the mall opened in 1980, closed in March, joining hundreds of Sears locations shuttered as the iconic retailer tries to shed debt in the wake of its bankruptcy filing. At 157,000 square feet spread over two stories, and including an automotive center, the Sears footprint dwarfed others at the mall located at U.S. Highway 84 and State Highway 6.

Dillard’s, another original anchor, worked behind the scenes to buy the Sears space before Sears formally announced its closing. Shortly after Sears went public with its plans, Dillard’s confirmed it would launch a massive remodel. It would wind down operations at its 104,000-square-foot leased space where it sells women’s apparel, luggage, jewelry, cosmetics, fragrances and housewares while crews remade the Sears space in Dillard’s image.

The switch is scheduled to take place in May next year, when Dillard’s departs its 39-year mall home to occupy the Sears site fresh from an $8.3 million makeover. Guymon declined to discuss cost estimates, saying to do so would breach the Arkansas-based retailer’s policy. Nor would she say if that figure reflects only construction costs or might include furniture and fixtures.

The building permit that includes the $8.3 million estimate was secured last Monday by Arkansas-based CDI Contractors, whose website reveals the company has had a longtime working relationship with Dillard’s.

Work covered by the permit includes a store remodel and “one-story expansion,” according to a notation in the Associated General Contractors of America newsletter, which regularly includes newly issued building permits.

Guymon said she does not personally know how that one-story expansion fits into Dillard’s grand scheme at Richland Mall. She did confirm Dillard’s is adding about 20,000 square feet to existing space there, “with the idea of being able to present a deeper assortment of men’s apparel.” She said this space would complement, not replace, the existing Dillard’s menswear location.

“Gracious, that’s a surprising number for basically a conversion,” Cromwell said of the $8.3 million price. “If you went out and had a tract of land and started from scratch, you could get well along with that amount. At first blush, that is surprisingly high. But if that is not the nicest, it is one of the nicest apparel places in town. Dillard’s is sold on Waco, and Waco is sold on Dillard’s. I can’t think of anyone I know who doesn’t shop at Dillard’s.”

He said proof of Waco’s image in the eyes of Dillard’s came a few years ago, when he had a conversation with store representatives about possibly placing a 90,000-square-foot two-story store “on the highway.”

Cromwell recalled that Richland Mall, at first named Richland Fashion Mall, was considered state of the art upon its arrival nearly four decades ago.

“It opened with five anchors: Dillard’s, Wilson’s, Bealls, Sears and Penney’s. At the time, they were all high cotton,” Cromwell said.

Wilson’s, a sporting goods chain, is long gone, though the mall now has a Dick’s Sporting Goods location. Bealls is becoming Gordmans, both with the same corporate parent.

He called that outlay “pretty stout” and said the chain’s commitment becomes more impressive knowing Dillard’s owns the space outright. CBL Properties, which owns much of the balance of the mall’s 708,249 square feet of retail space, may not feel compelled to help with financing, Farrar said.

“Sales must be pretty healthy, or they wouldn’t be doing what they’re doing,” Farrar said of Dillard’s. “Mall ownership has really done a good job of keeping the mall going, keeping it full and vibrant, unlike what’s happening elsewhere. Some malls are struggling, but Richland Mall never has.”

The mall has suffered defections, with tenants such as Gap, Old Navy, Forever 21, Kirkland’s, James Avery and Best Buy, among others, relocating to Texas Central Marketplace at Interstate 35 and West Loop 340. But it has recovered to keep the occupancy rate above 90%, longtime former mall manager Kandace Menning said.

Guymon, with Dillard’s, said she believes shoppers will enjoy experiencing the new store when it is unveiled next spring. She said it will feature a larger line of women’s footwear, expanded cosmetics offerings and deeper inventories of beauty products, handbags, accessories and fashion jewelry. She predicted a fun environment and quality touches highlighted by an expanded edition of “the revered Texas brand, James Avery,” and a greater focus on sunglasses, with plans to carry Tom Ford, Maui Jim and Costa products.

ICA Properties in Odessa is marketing the 104,000-square-foot space in Richland Mall that Dillard’s will leave next year. The space has received interest from retail, entertainment and restaurant users, but no deal is pending, a spokesperson said Friday.